It’s been a long time since we covered anything from Antec and frankly it’s been a long time since they have reinvented some of their lineup. When they introduced their P280 recently I was excited to see a little motion from their camp and when they contacted me wondering if we wanted to take a closer look I didn’t hesitate to jump on it. The new P280 is larger than any of the other cases from their P line but with more up to date features I’m excited to see where it stands compared to everything else we have seen recently.

The P280’s packaging has that distinguished Antec style with the black and yellow contrasting colors. Along with that you have a large photo of the p280 across the front and the P280 name at the bottom. At first glance it’s hard to spot the difference between this and one of the P100 series cases. Around back Antec has 11 different photos with full descriptions breaking each photo down. Inside the packaging the case is wrapped in plastic with plastic foam keeping it secure and protected. The front of the case has a second layer of plastic over it to prevent any finger prints and scratches. 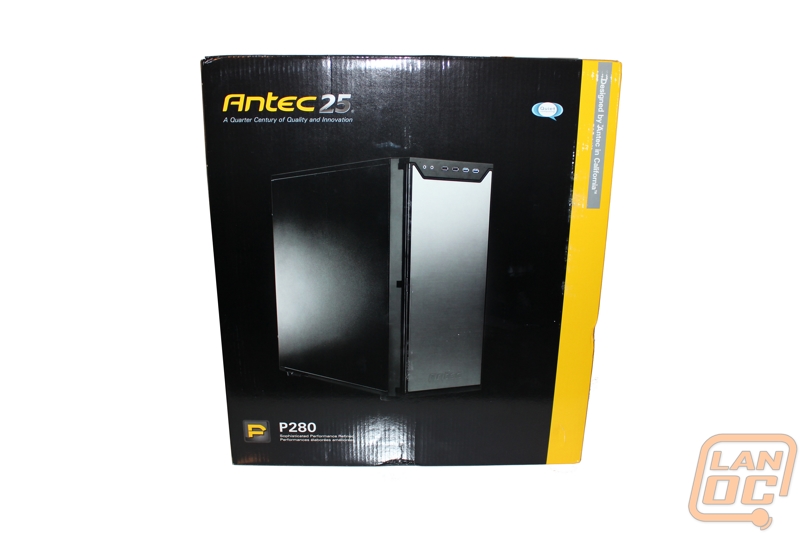 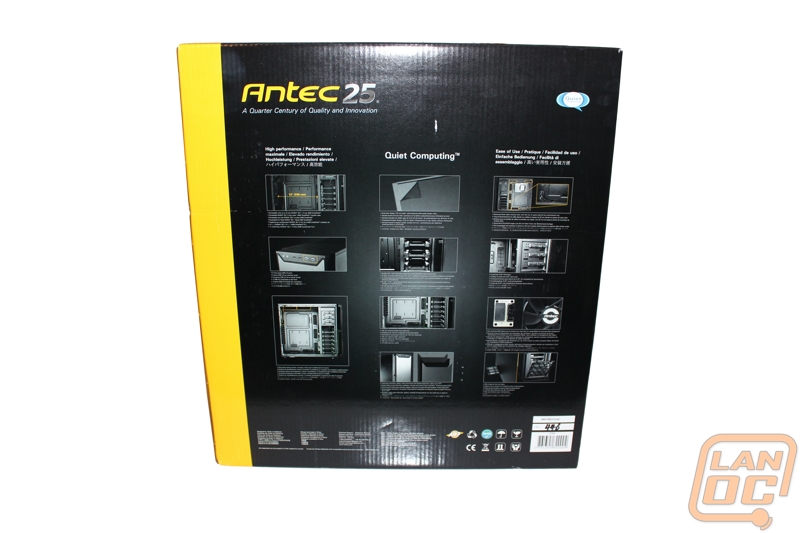 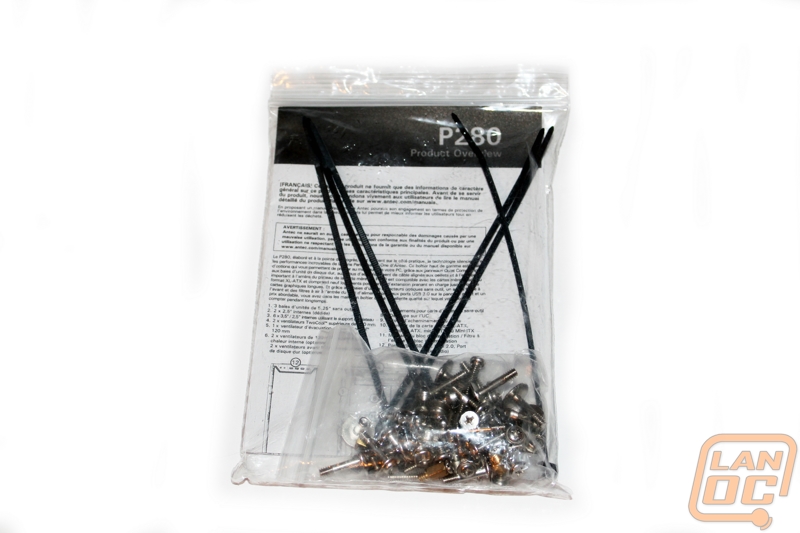 As I mentioned before at first glance the P280 looks a lot like the popular p180/190 series. It’s not until you notice how the case widens after the front panel than you realize you are looking at a whole new beast. 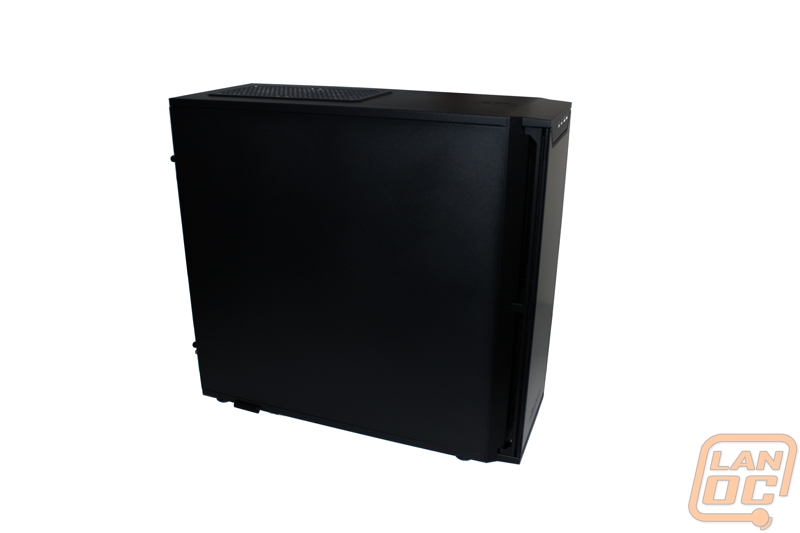 Up top you have raised fan grip area for two 120mm fans, beyond that the only thing you will find on top is the power and reset buttons near the front. In fact both left and right side panels are the same also with no fan grills or windows; just like past performance series cases. On the bottom of the left side there is a small tab hanging off the bottom that allows you to pull out the bottom fan filter. 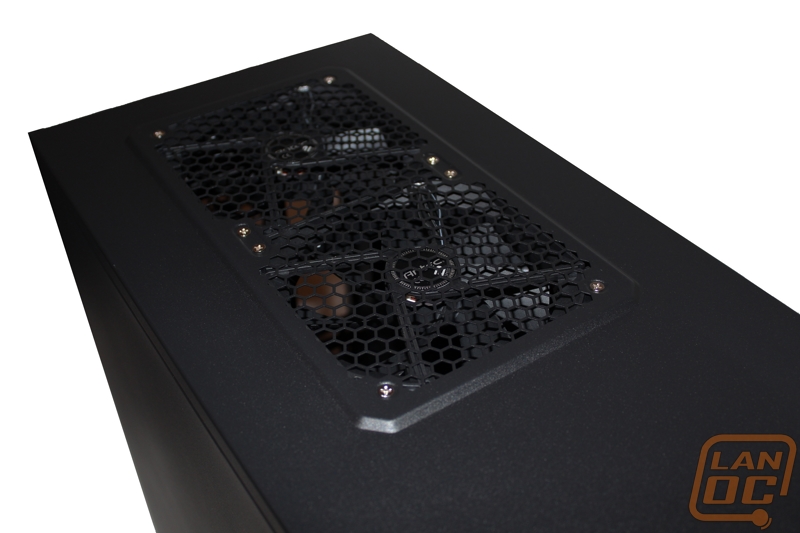 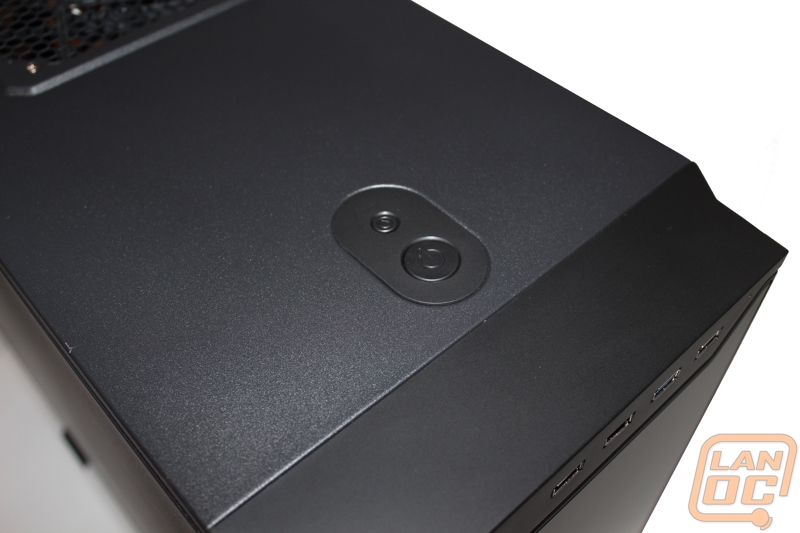 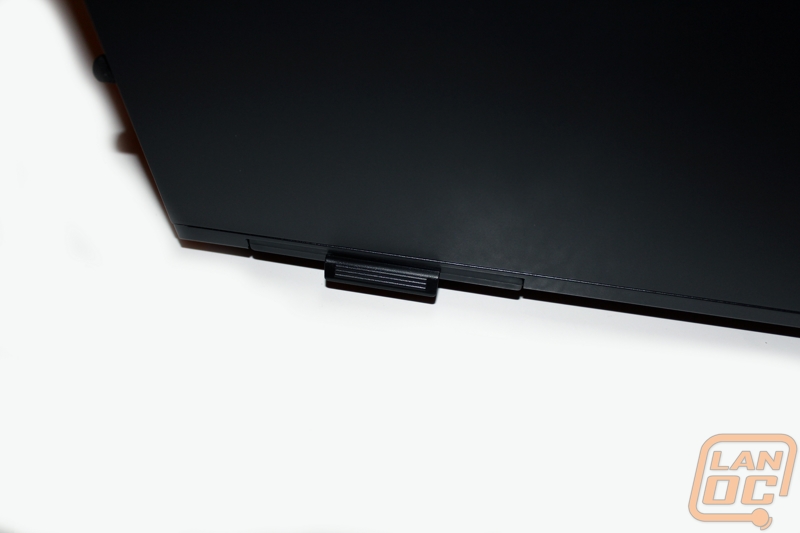 It isn’t until you get to the front of the P280 that you start finding features. First you will come across the front I/O panel with four USB ports, two being 2.0 and two 3.0. Along with the USB ports you have the headphone and microphone ports. The rest of the front is covered by a large door. Opening it you will find the entire door is covered in a sound deadening foam. The layout of the front panel has a large filter covering half of the front, in order to pull air in without disturbing the clean look you have a gap between the door and the filter with an opening at the bottom to pull air in from. That same filter has two tabs holding it on and is easily removed for cleaning. Last but not least on the front you have three 5 ¼ drive bays for your devices. 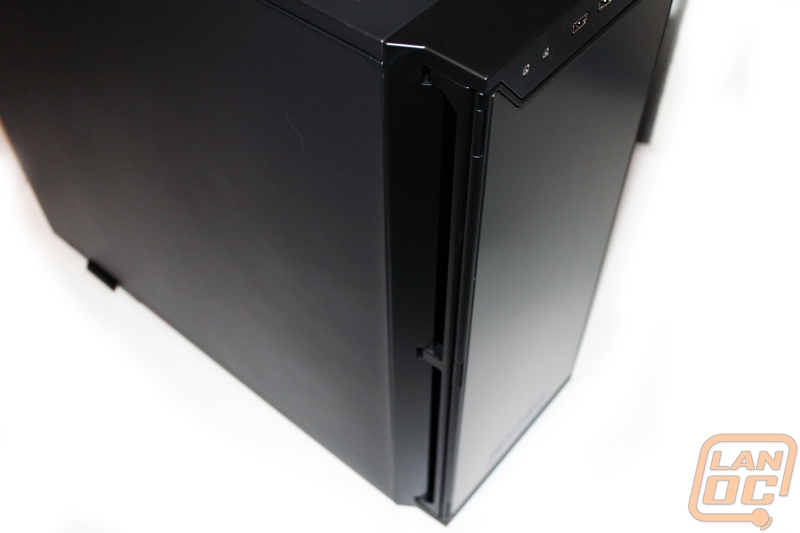 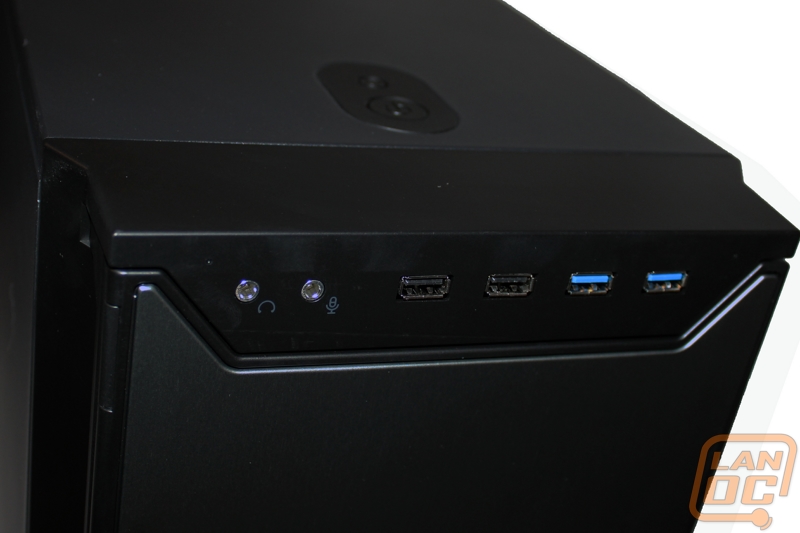 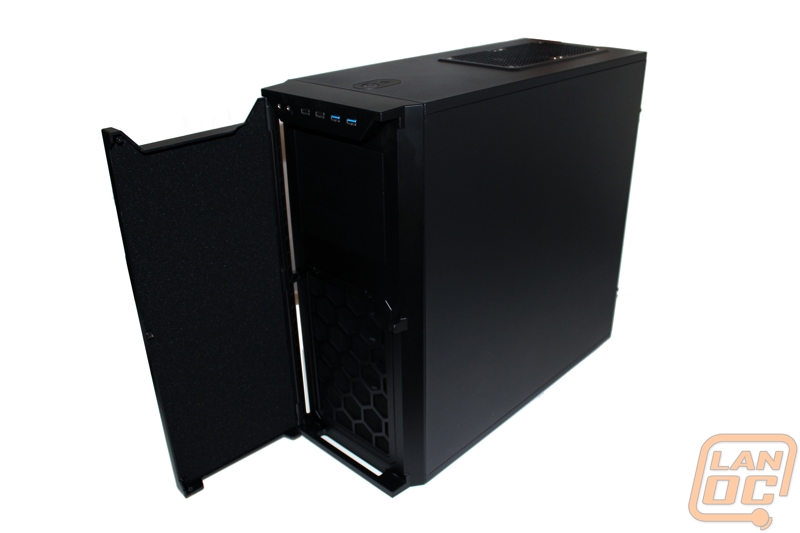 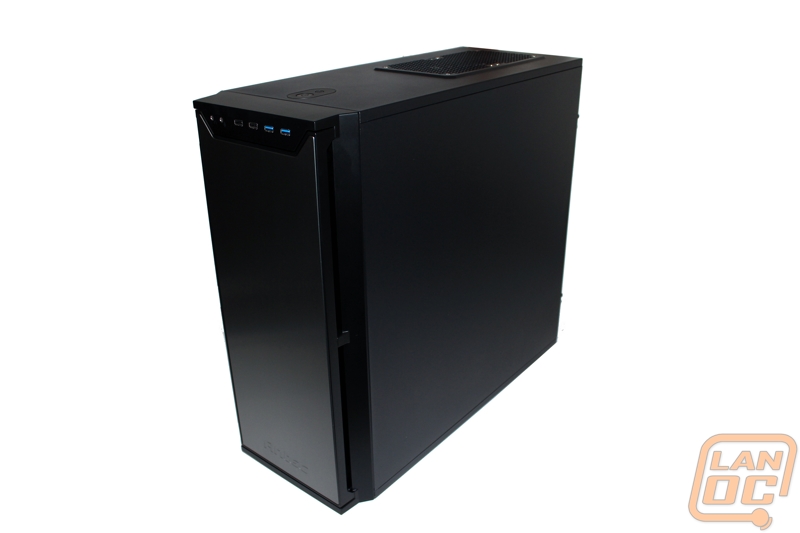 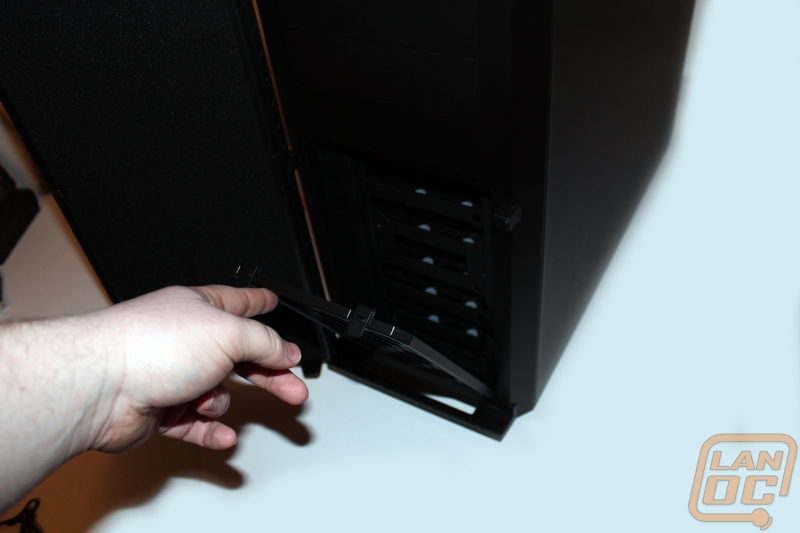 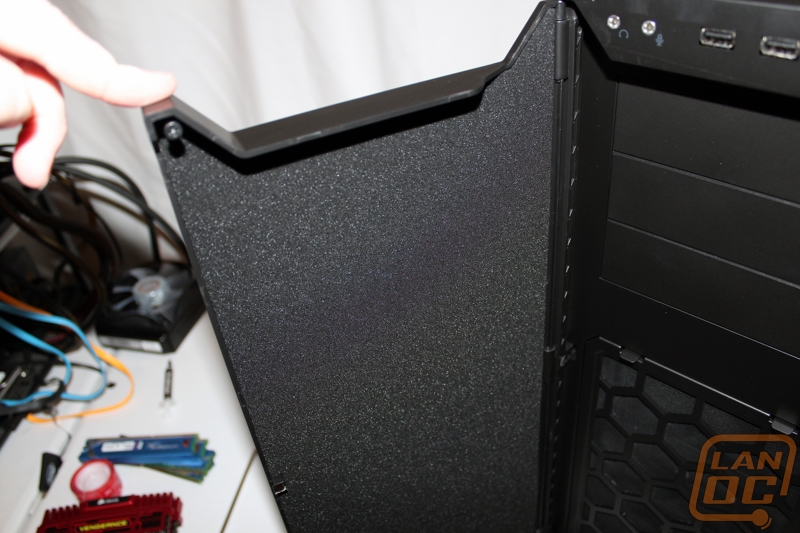 Around back the black theme continues, I should also point out that the back has the same finish as the side and top panels. Typically the back panel may be black but not the same finish as the rest of the case, this is a nice touch. In the top right corner there is a box of switches to control the P280’s fans; this is similar to what we have seen in the past on both the P Series and the Gaming cases from Antec. Below that is a 120mm exhaust fan. It’s clear from looking at the back panel that they tried to fit as much cooling as they could with mesh above the PCI slots, under the motherboard tray, and even in each PCI slot. Speaking of PCI slots there are a whopping 9 total in the P280, meaning it supports XL-ATX motherboards! Down at the bottom is the power supply mount; it’s also nice to see a standard mount size here, not Antec’s proprietary larger PSU height. 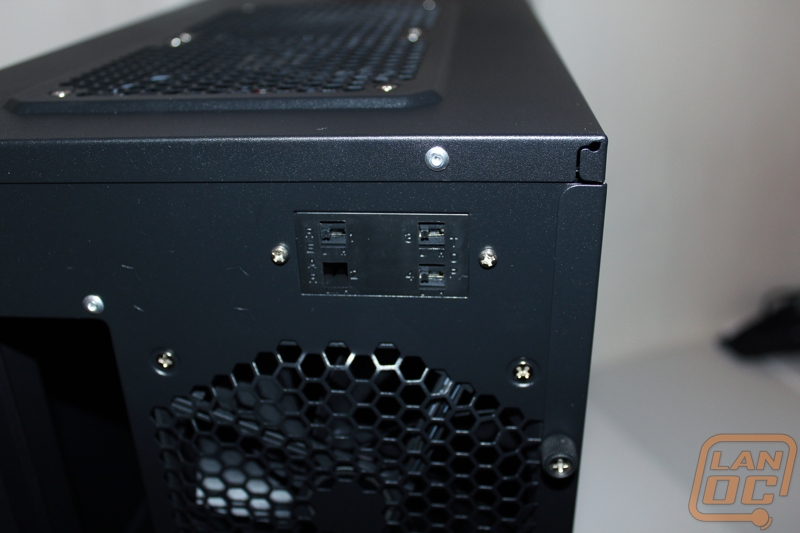 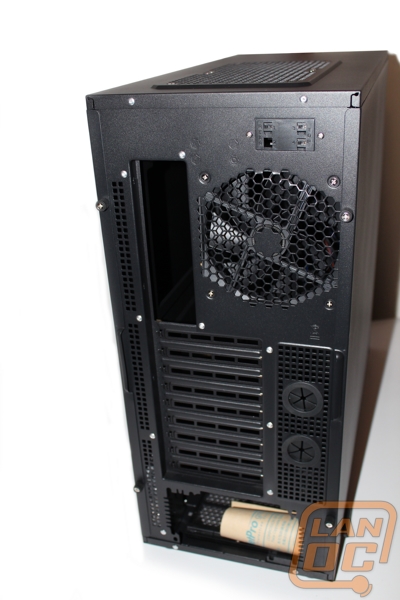 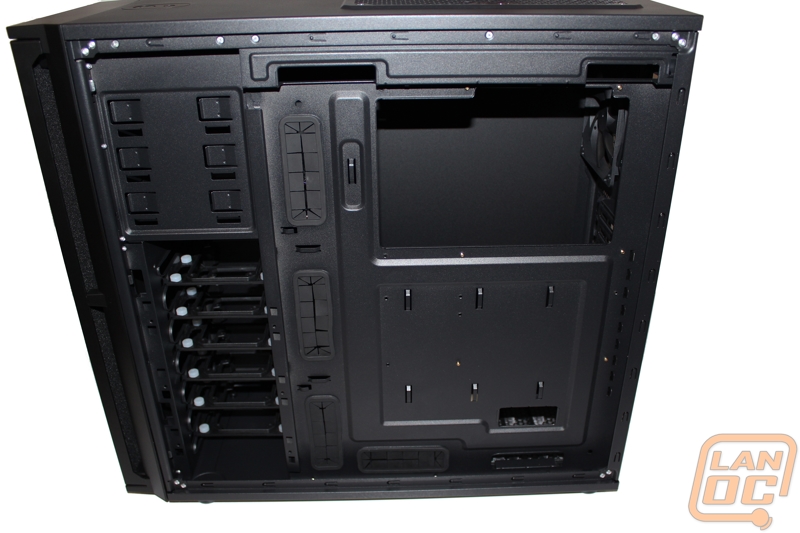 On the other side the P280 looks amazing. The black interior along with all of its features really make it a shame that there isn’t a side panel window on the case. There are six plastic hard drive trays, each tray supports 2.4 and 3.5 inch drives and for the larger 3.5 inch drives they have included silicon mounts to cut down on vibrations. 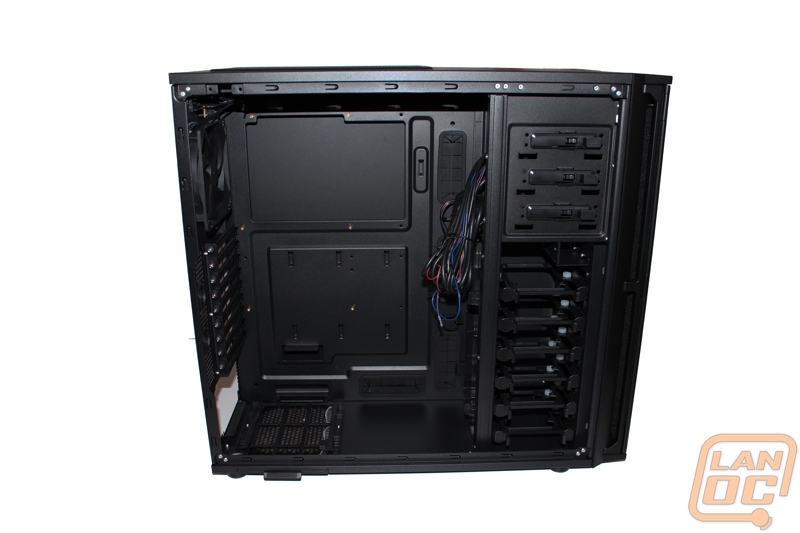 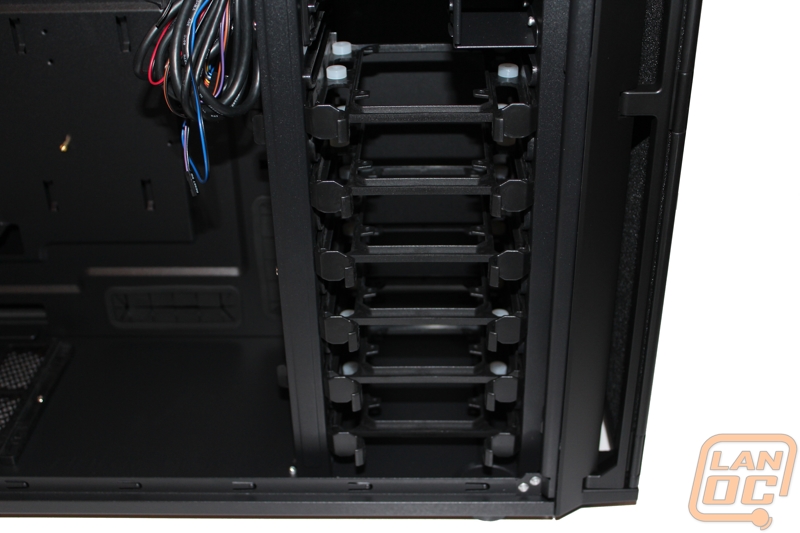 The three 5 ¼ drive bays all have tool less mechanisms that are quick and easy to use. If you are worried about vibrations you also have the option to use screws. 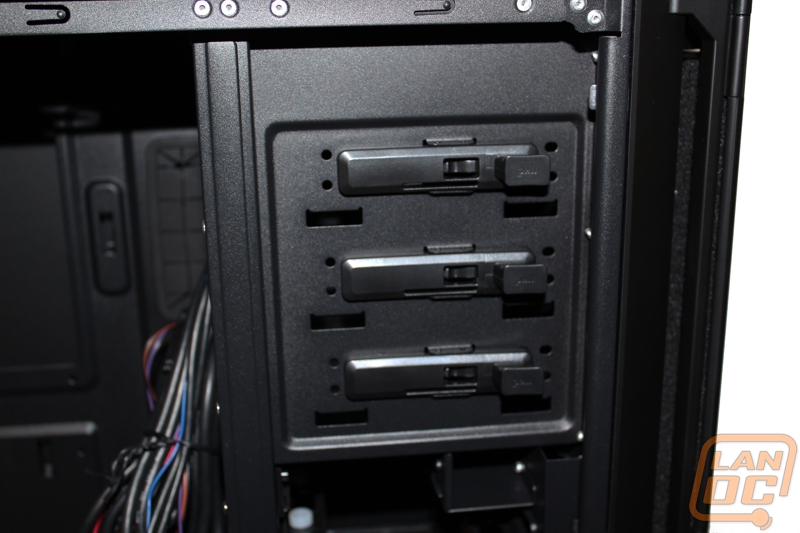 Your power supply goes in the bottom left corner of the case and as we noted before there is a fan filter for the bottom vent. 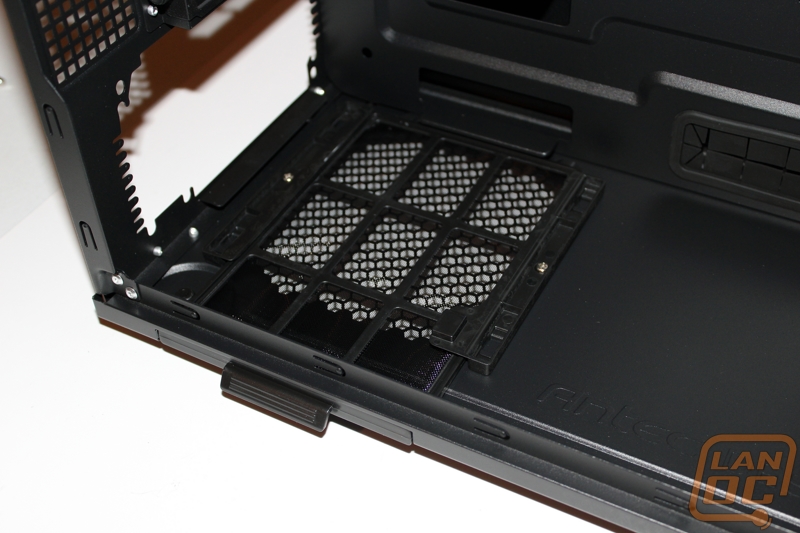 For ventilation the P280 comes with three 120mm fans and gives you the option to add three more. The fans that are included are in the top (two) and then in the rear (one). I would have liked to of seen a fan be included on the front to help cool the hard drives, but with a mount there it wouldn’t be a hard thing to add later. 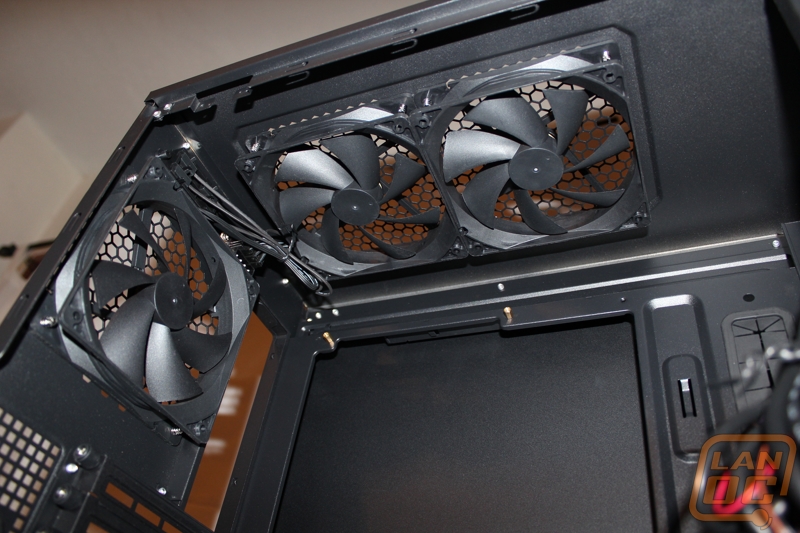 Another feature that the P280 has over other Antec cases is a very large CPU backplate access hole. This has to be one of the largest we have ever seen; you should not have issues with any single CPU board on the market.

The amount of cabling that comes with the P280 can be a little overwhelming, but with both USB 2.03 ports and USB 3.0 ports on the front its not shocking. It is nice to see that they went with an internal USB 3.0 header. Also I’m happy to see that the USB 3.0 cables are black in color, so many company’s go with blue but forget that they clash with the clean look most people try to do with their PC’s 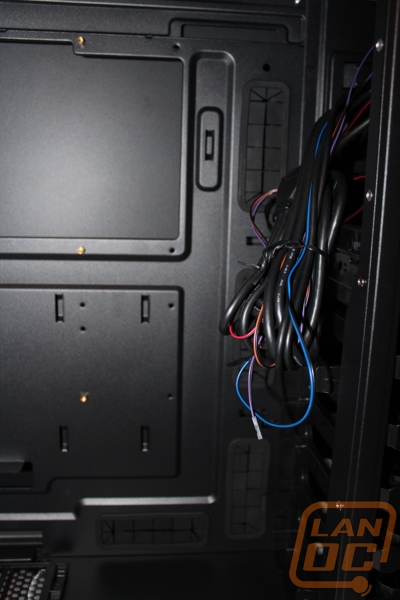 There is a world of difference between working in the P280 over past Antec models. Wiring everything up is much easier now with multiple wire management holes and a little more room between the motherboard and the side panel. The width of the case also means you have room for any of the tower heatsinks on the market. It also helps that there isn’t a fan on the side panel. Installing our hard drives were easy using the plastic tray system, something that everyone seems to use now. My only complaint really is something I missed when originally going over the interior of the case. Up top, the fan controller sticks out in a way that if you wanted to mount an H100 or 240mm radiator you wouldn’t be able too without smashing it in (the H100 might fit better than a standard 240MM radiator, it is a little smaller). Another issue that we ran into because of the size of the case is getting a molex power connection all the way to the top left corner for the fan controller; it was possible but be sure you have long cables with your power supply. The P280 is somewhere between a mid and full tower case but no matter how you slice it, it’s still not small.

With everything up and running I was impressed with the P280’s noise level. I expected it to be quiet based on past experiences with the P line but without sound deadening on the side panels I wasn’t sure that it would perform as well as past models. Cooling performance wasn’t bad at all, having two fans up top really does a good job keeping the air flowing. I did notice a slight rattle with the top fans set to high, turning the speed down a little corrected this. Having said that, this is an issue that you shouldn’t have to worry about in a case of this price range and it’s a little disappointing. It seems to be an issue with medium quality fans paired up with a slightly flexible top panel that causes the problem. A fan from someone like Noctua wouldn’t vibrate, or a little more support on the top panel would also correct this issue.

Our time with the P280 leaves me with mixed emotions. I’m excited to see Antec stepping up again with new designs. They improved on the original P series design with lots of features that bring it in line with what all manufactures are including in their cases now. The design isn’t innovative in any way like the original P180 was, but with it being in line with the competition it’s something to consider for quiet builds. I hope that our vibration issues are corrected in the future as that was the only real problem we had. As the end of the day, if you loved the P180, you’re going to love the P280 for your next build. With it being priced at less than $140 I bet they sell like hotcakes too! 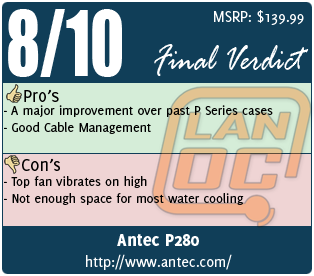 You might call him obsessed or just a hardcore geek. Wes's obsession with gaming hardware and gadgets isn't anything new, he could be found taking things apart even as a child. When not poking around in PC's he can be found playing League of Legends, Awesomenauts, or Civilization 5 or watching a wide variety of TV shows and Movies. A car guy at heart, the same things that draw him into tweaking cars apply when building good looking fast computers. If you are interested in writing for Wes here at LanOC you can reach out to him directly using our contact form.
Discuss this article
Log in to comment
Posts in discussion: Antec P280