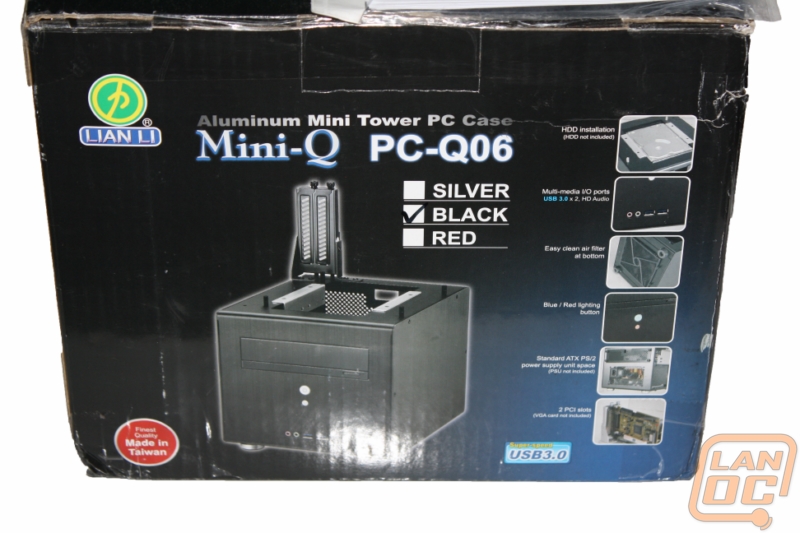 As per the usual with Lian Li’s cases the PC-Q06 was shipped directly from Taiwan. Somewhere during the shipping process the box must be dropped onto the ground and rolled all the way to a truck, but as always even with slight box damage the contents come in without a scratch. The design of the packaging is similar to other Lian Li cases. Both the front and rear are identical with a nice picture of the case itself on a black and blue background. The Lian Li logo is on the top left along with the product name above the photo. Because they sell this case in four different colors you will see silver, black, and red with empty boxes next to them, this way they can just select the color of that specific case. In our case this one is black. Lastly, you will find six photos on the right side of the front/rear of specific details and features of the case. They each have a short description next to them to help you understand what you are looking at. Inside the case is wrapped in a plastic bag and protected with plastic foam on both ends; obviously this did the trick, short of a large puncture you shouldn’t have any worries about the case being damaged. 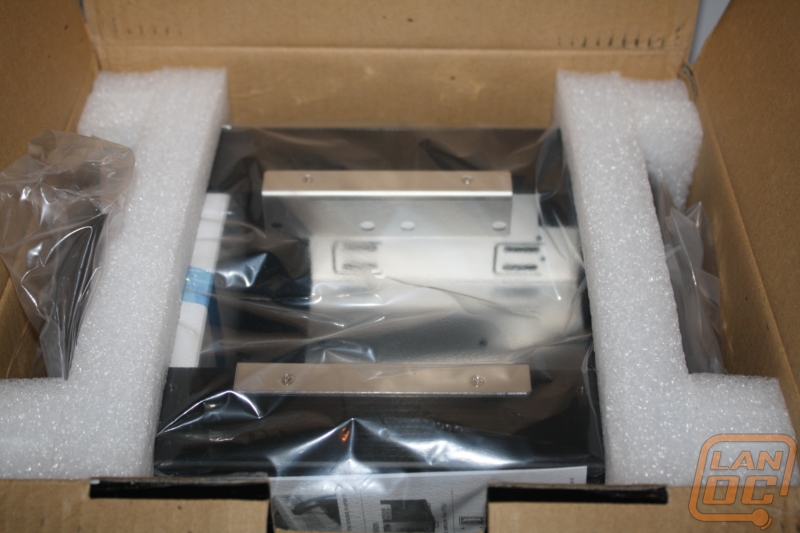 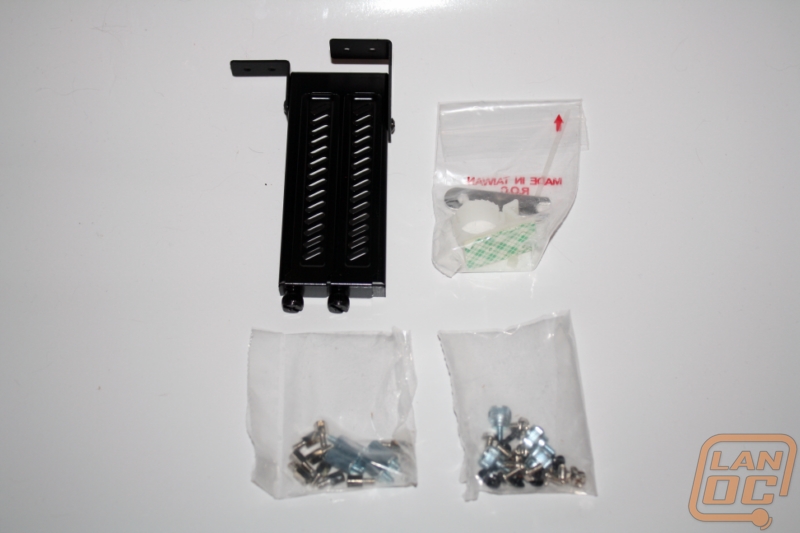 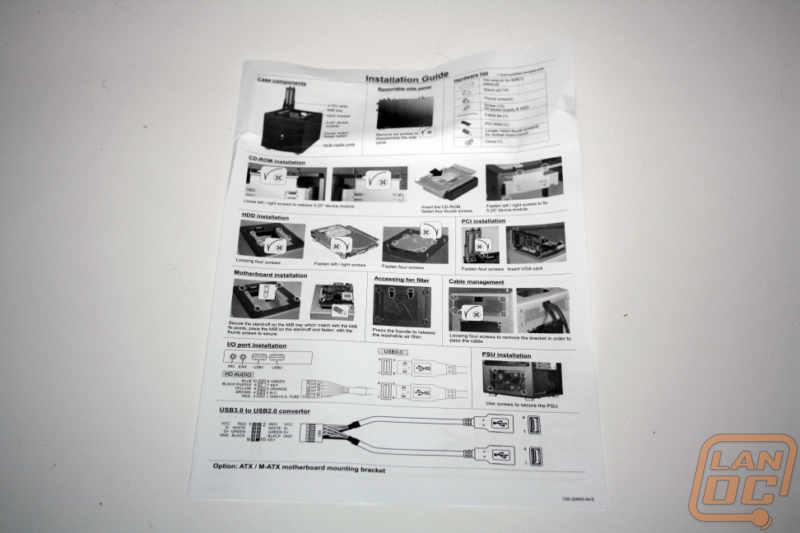 There really isn’t a whole lot to the PC-Q06, it really is a shell for the hard drive, power supply, and disc drive. The important parts like the motherboard and video card are in your face right up top. Standing out from the T6 the PC-Q06 has both audio and USB front inputs without having to buy a separate kit. The USB ports are even USB 3.0 making for a perfect match for the Mini ITX motherboard we recently reviewed from Gigabyte. The power and reset buttons are both on the front and centered for easy access and for a slick look. Above the power and reset buttons the disc drive is hidden behind a built in cover. As with the rest of the PC-Q06, even the disc drive cover is machined out of aluminum. Around back you will find the mounting location for the PSU along with a vented panel that is held in place with four thumb screws. This panel gives you easy access to the inside of the case when everything is put together and also doubles as a small port for you to feed the necessary cables up to your video card and motherboard. 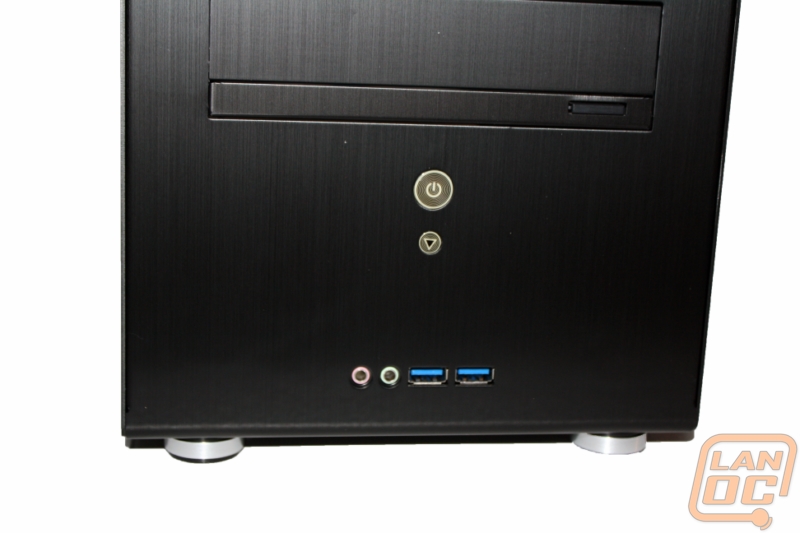 Up top, you secure your Mini ITX motherboard on four screws and Lian Li has included a two slot PCI bracket for attaching your PCI or PCI express devices. On the opposite end hidden under the case you will find four high quality round feet made out of aluminum with non-skid rubber on the bottom to keep the PC-Q06 in place and give it a little flare. This is where a Lian Li case stands out against their competition, they could have easily gone with four stick on rubber bumpers for feet. But they used bolt on aluminum feet to go above and beyond. Tucked in between the feet there is an easy to detach fan filter to keep your PSU from sucking in anything unneeded. 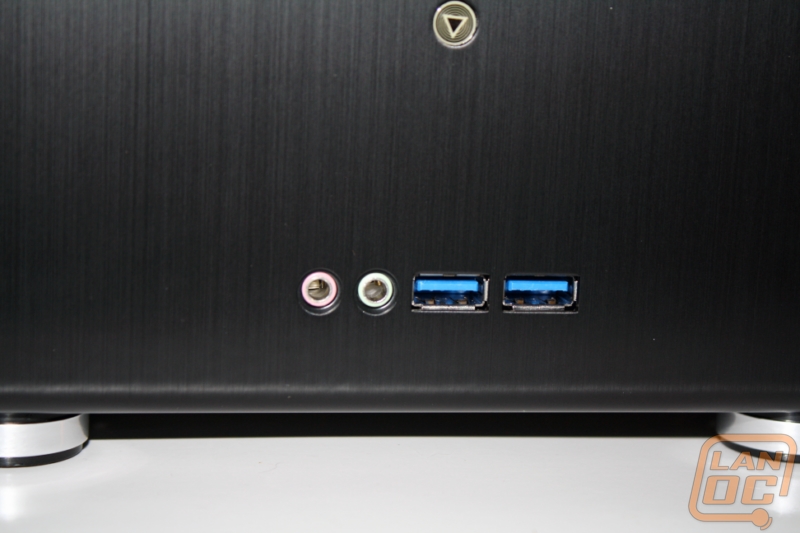 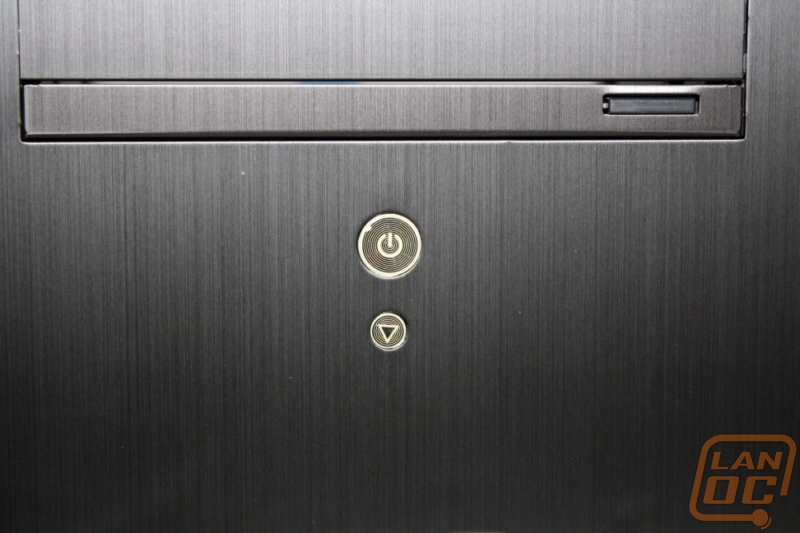 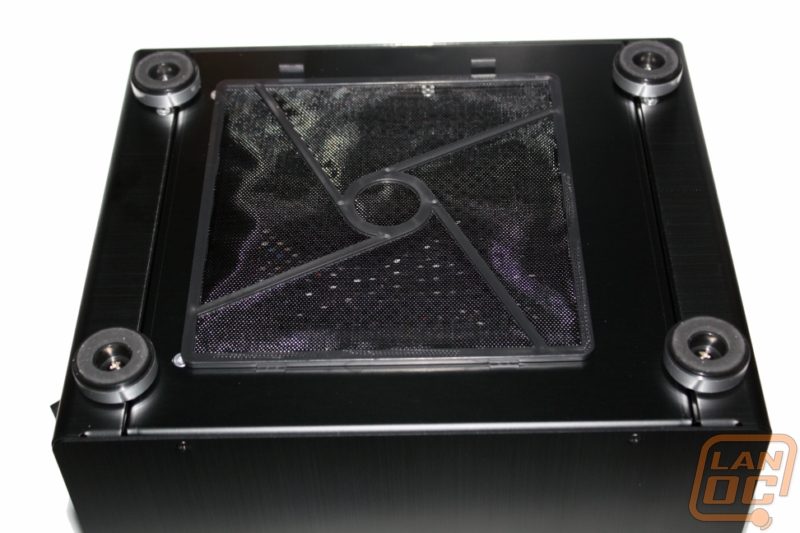 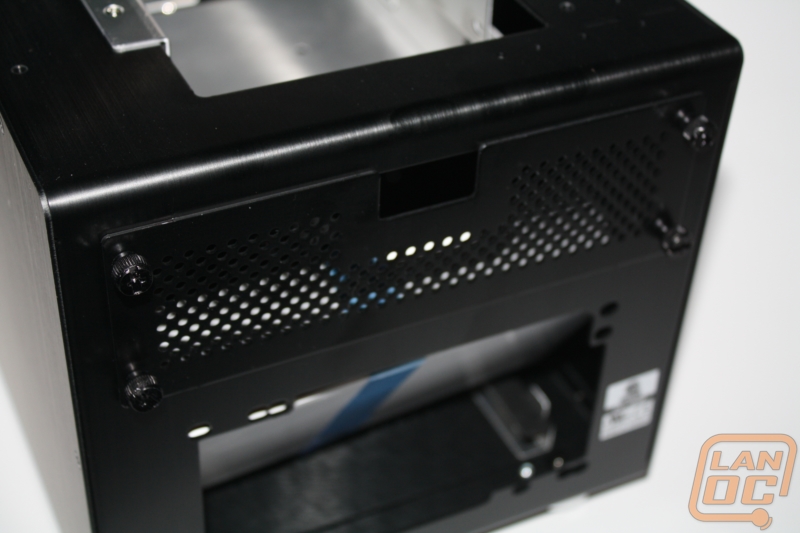 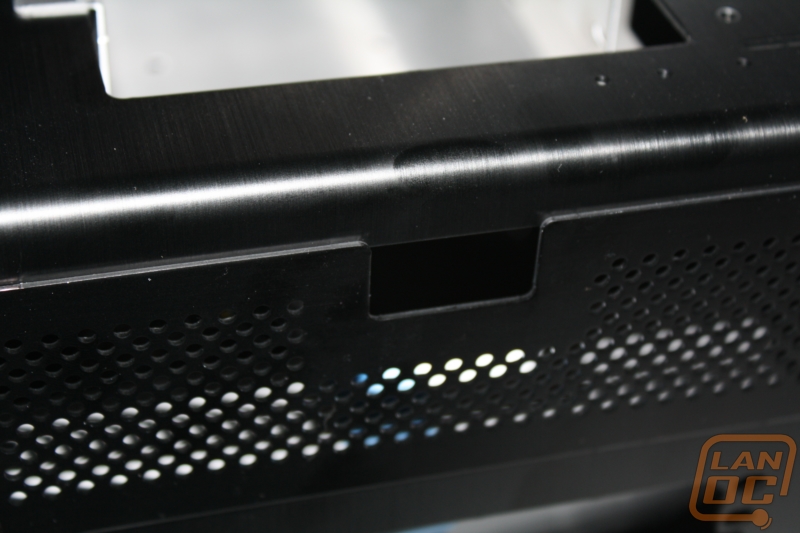 The inside of the PC-Q06 hardly has enough room to do anything with. It’s amazing that you can pack a PSU, hard drive, and disc drive into entire thing really. Similar to the T6 it only has the one hard drive slot, so your hopes and dreams of packing a few 2tb drives into it will be crushed. The same goes for 5 ¼ inch drive bays, you are stuck with just one, not that you have a need for much more really. Both drives do not use any tool-less features, just the traditional screws on each side. Other than the Drives you will also find your power supply packed into the inside of the PC-Q06, the have placed it directly above the vent on the bottom your PSU fan is the only fan being used on this case. 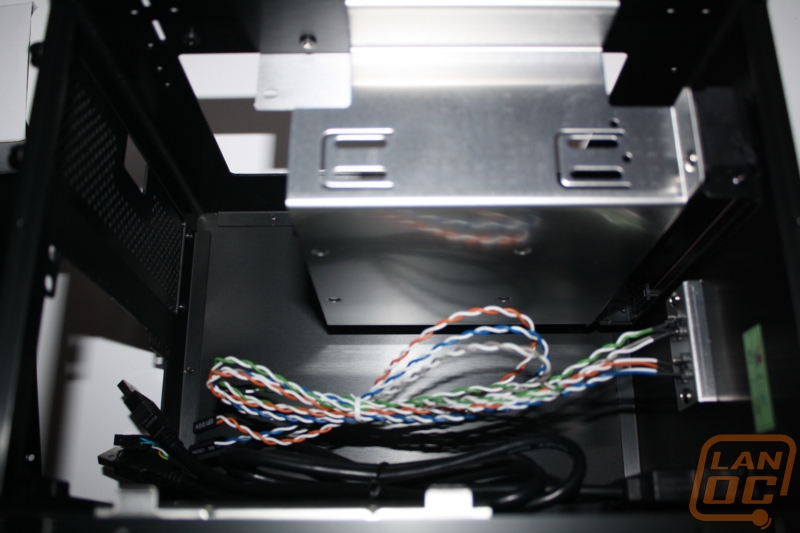 To get started with the installation on the PC-Q06 you will have to dig out your screwdriver and remove a collection of screws from each side panel, no easy to use thumbscrews this time around. The work may be worth it, but after getting used to the normal two thumb screws to take off a side panel it’s not any fun to have to work with 6 screws per side. This will make you double check your setup before putting everything back together. With everything open you will have to drop the drive mount bracket out to install your drives, then you can reinstall it. Lining up the disc drive is critical to make sure the front button works correctly, although if you mess up you won’t have to take everything back apart to readjust. 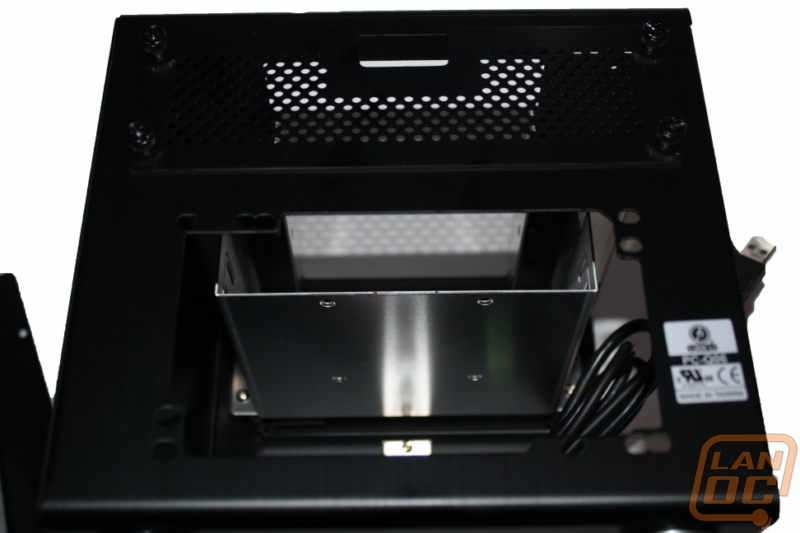 Packing the PSU in wasn’t as bad as I expected, but I was using a modular power supply, any standard power supply will become difficult to pack in with a mess of unneeded cables. Hooking up the USB 3.0 ports for the front of the case require that you plug them into the USB 3.0 ports on the back I/O panel. This isn’t just for Lian Li cases, without a standard in place for internal USB 3.0 connections everyone is stuck with this setup. To make things a little easier Lian Li did include an adapter to hook them up to internal USB 2.0 ports if you choose to do so.

With the internals packed in and ready to go all that is left is to install the motherboard and video card. In order for you to be able to do this you will have to install the PCI slot bracket, as opposed to the T6 this is the only assembly this case requires. With that done you can mount your motherboard down using the included screws and drop the video card in using the PCI thumbscrews to secure it. As long as you routed your cables out of the back you should be able to plug everything in and get ready to install windows. 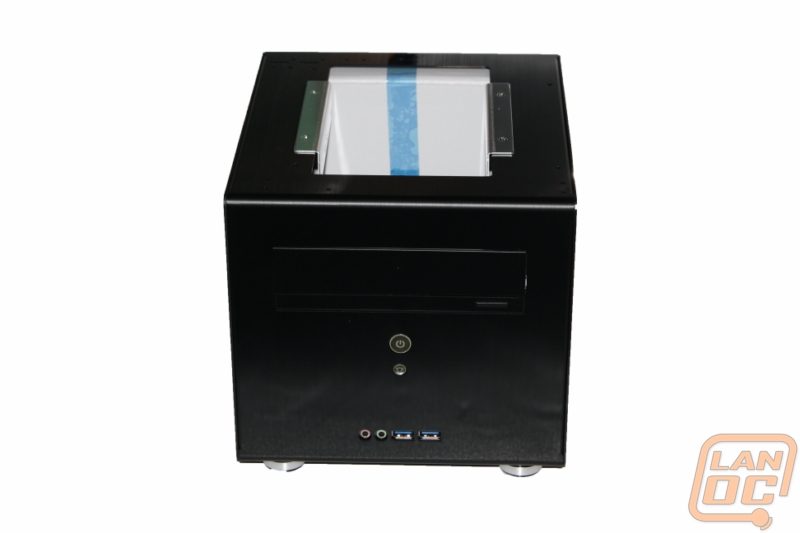 With everything up and running I was able to spend a little time with the PC-Q06 and compare it to its brother the T6. Both of the designs use a compact design, the Q06’s design having a better style but lacing the convenient handle. The enclosed design also means your noisy hard and disc drives aren’t out in the open and are a little quieter. This does make swapping them out considerably harder on the off chance you are interested in doing that. Both setups make swapping out motheboards and video cards very easy, obviously this is the main reason to be eying this setup anyhow. Just like the T6, this setup lacks any built in fans, the only way to keep the interior cool is the power supply fan. This does help keep the noise down, so much so that depending on the heatsink you decide on you may not even know it’s even turned on!

After spending time with the PC-Q06 I was left impressed but as with the T6 I still wonder how large this market is. It is nice to see Lian Li developing cases for just about every nitch, even going to the point of putting out two different Mini ITX designs. With that being said, if you are on the market for a Mini ITX test bench or an open air design should you pick up the Q06? Well with Lian Li’s amazing build quality and attention to detail it really isn’t even a question. I was very impressed with the details like the quality of the case feet, it’s always an attention to the details that make a good case an amazing case. I was surprised at the lack of any fans in the design, but without the video card and motherboard internally the PSU fan was enough to keep things under control. If you are trying to design between the T6 and the PC-Q06 it really comes down to how accessible do you want your drives to be. The PC-Q06 keeps everything safe and sound and has the potential to be a unique everyday case as well as a test bench. 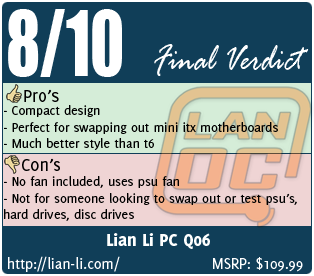 You might call him obsessed or just a hardcore geek. Wes's obsession with gaming hardware and gadgets isn't anything new, he could be found taking things apart even as a child. When not poking around in PC's he can be found playing League of Legends, Awesomenauts, or Civilization 5 or watching a wide variety of TV shows and Movies. A car guy at heart, the same things that draw him into tweaking cars apply when building good looking fast computers. If you are interested in writing for Wes here at LanOC you can reach out to him directly using our contact form.
Discuss this article
Log in to comment
Posts in discussion: Lian Li PC Q06

We have 648 guests and one member online