These days, it's hard to justify spending crazy amounts of money on a PC when so much performance can be had for very little money. You can put together a decent PC for just a few hundred dollars. You've done your research and picked out the parts you want, but somehow you've got to fit a case into your limited budget too? If you spend too much on one, you might have to cut back on something else. Sacrificing performance isn't something you want to do just for the sake of having a big fancy case. An ugly beige box isn't an option either. What do you do? In-Win thinks they have the solution to this predicament.

This is the kind of packaging I like to see. The Griffin is packed in a brown box with simple, single color printing on it. Why waste a bunch of money on a glossy coating with full color photos and graphics? If you've ever had anything printed, you'll know how much more it costs to get multiple colors. This is one thing less that gets added to the price. 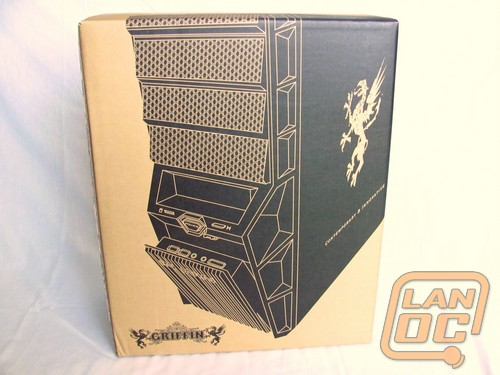 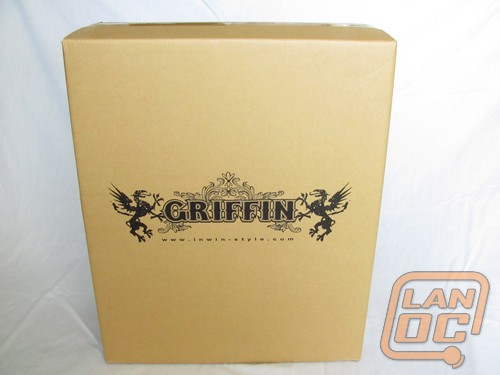 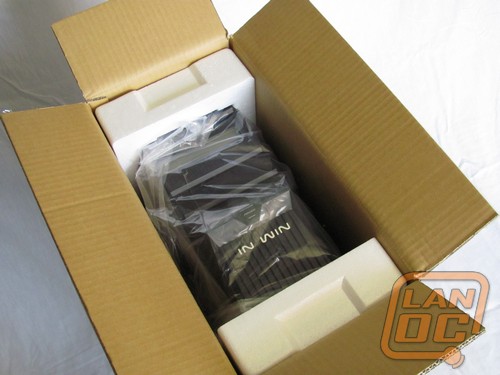 At first look, The Griffin has some pretty interesting details. The side panel has a huge fan mounted on the inside. That's one feature that I'll never turn down. They push a lot of air without the noise you'd get from smaller fans. You also have the ability to remove it and place two 120mm fans in it's place. This might come in handy if you plan on using a large "tower" style CPU cooler. There just isn't room for the big fan and a big cooler inside the case at the same time. With this option you can still use that big cooler by removing the big fan and placing a 120mm fan in the bottom spot. Personally, I'd just use a lower profile cooler and keep the big fan, but at least the option is there for you.

The front panel it a bit different from the average case. They've taken what is normally a boring flat surface and spiced it up a bit. Each drive bay cover is angled to give it more detail, which I assume doesn't cost any more to achieve. Another great feature is the picture of a griffin that is the screen-printed on the side. It gives it a nice custom look. 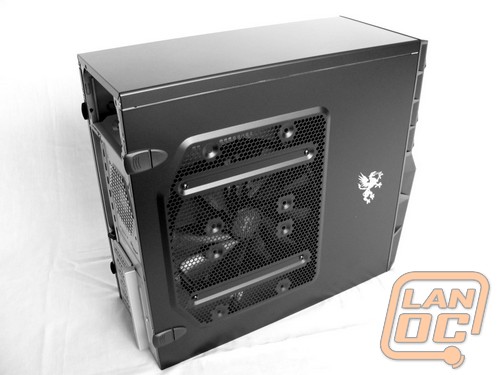 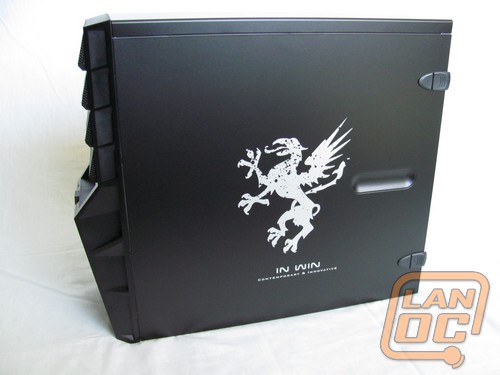 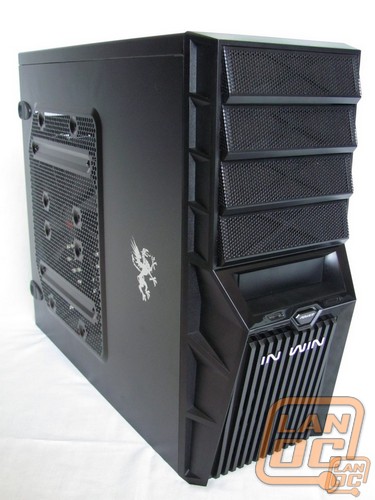 The Griffin sports several tool-less elements. One of which is the sidepanel locks. There's really not much to them. Once you slide the panel on, the they snap into place. What keeps the panel from moving is a nub that pokes through a hole in the metal on the side and a couple more nubs that snap into the notches on the back, to hold it in place. The downside I see to this setup is that the plastic on the nubs on the back will wear off over time and not keep it held in place any more. I think they anticipated this and included holes for using a screw as well. If you don't open and close your case like I do, you should be fine. Otherwise, you might want to have some thumbscrews ready to go, when it gives out. 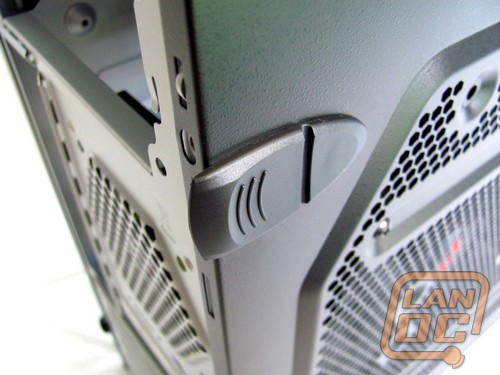 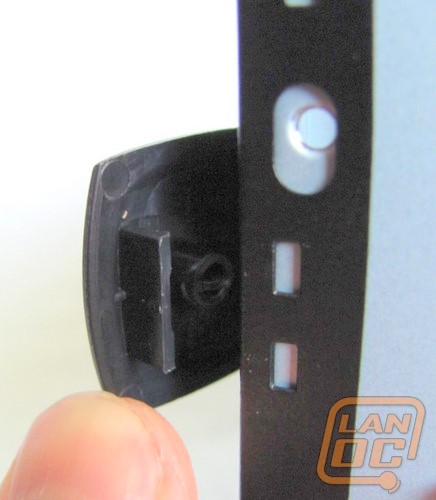 To keep the design sleek and uncluttered, In-Win decided to put the front ports on a pop-out panel. This is great for aesthetics, but not so much for airflow. Instead of that whole area being open for air to flow through, only a small fraction at the bottom is. "Boo!" Hindering airflow just for the sake of looks is a big no no. 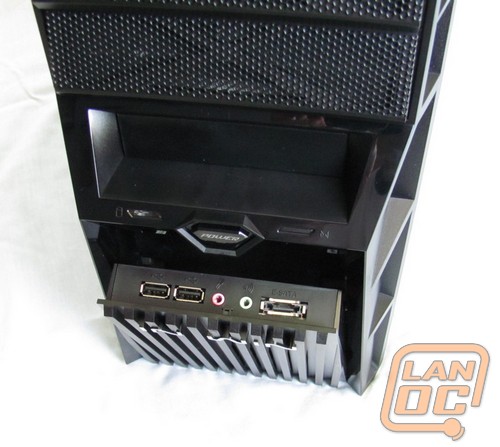 Here's where we get to the "meat and potatoes" of the thing. When you get it, the first thing you notice is the thickness of the metal, or the lack there-of. Even my kids brought this point up when they took a look at it. It's not so thin that it feels like it will crush like a pop can, it's just enough thinner than other cases, that you notice. As long as you're not using it as a step stool, you should be all right. The inside is what you'd expect from a budget case. Really, the only thing that stands out are the tool-less drive locks. I suppose for the price, you can't expect a painted interior or a CPU cut-out on the motherboard panel. You do get a 92mm fan on the back, but this is the only other fan that is included. So be be sure to adjust your budget for one for the front. Also, the trend with cases lately has been to mount the power supply at the bottom. I have become accustom to this and sighed a little when I noticed that the Griffin didn't follow this trend. I guess it's no big deal. It just takes away the option for top mounted exhaust fans. Although I have been know to break out the hole saw and add one of my own in between the optical drive and the power supply. Geek-American Engineering. 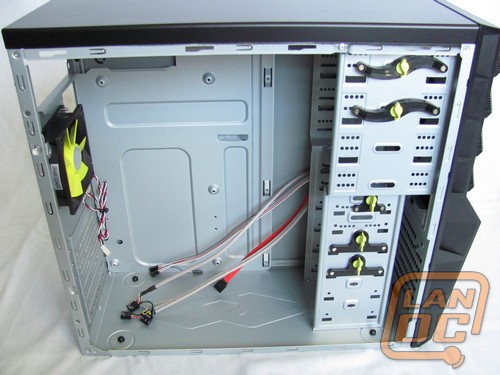 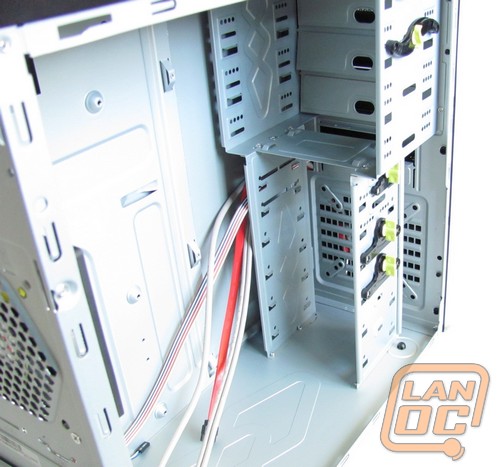 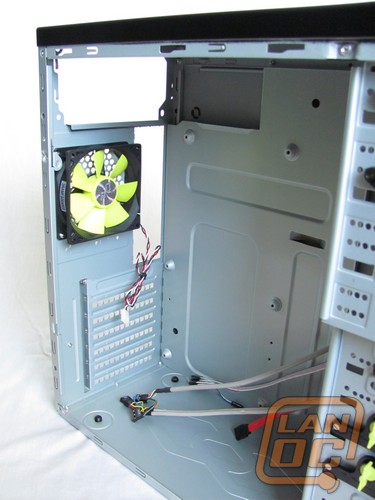 Once again, I get another case in that has slot covers that need to be bent back and forth to remove them. I wonder what the cost savings of this is, because it sure is annoying to not be able to cover that hole up when you need to. One thing that's funny is that boxie cover over the edge of slots. Now that sure is fuggly. I guess aesthetics don't matter much on the back. On the opposite side of the case, you have the spot that is open for you to add an additional fan. On the up side, you have the option of putting in either a 120mm, 92mm, or a 80mm fan. Pretty much what ever you have lying around will go in. On the down side, you have to remove the front facade to be able to do so. You win some and you lose some. 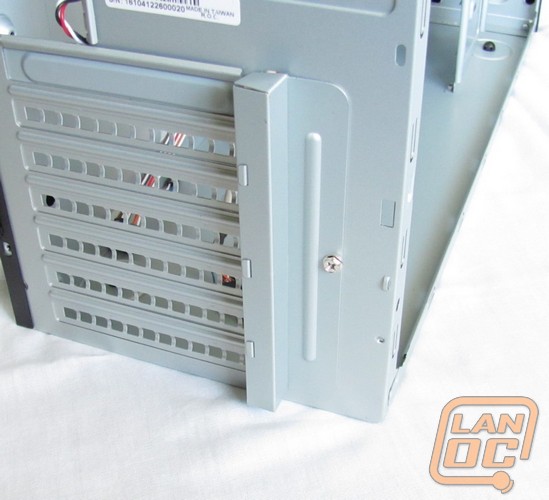 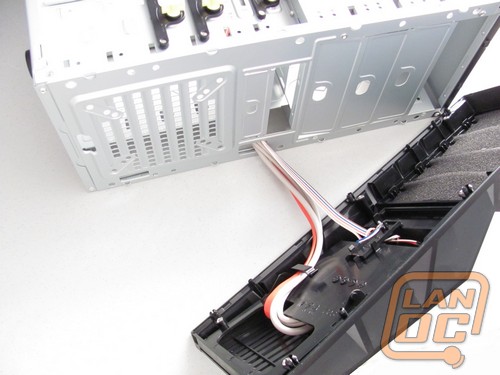 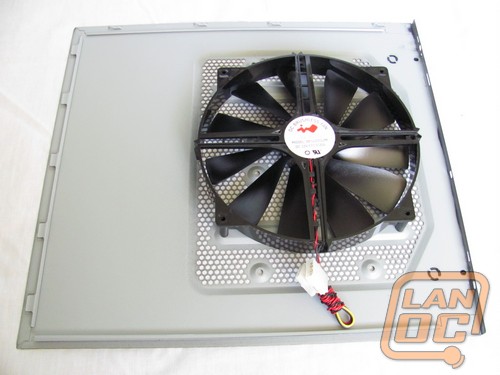 I took one for the team and installed a computer into the case just to get these pictures. I promptly took it out and put it back in it's HTPC style case. It was a mighty fine excuse for me to tear it apart and give it a thorough cleaning. There's no better way for a geek to spend a Saturday morning, other than play Battlefield: Bad Company 2. One thing I do like about the interior configuration is that there's plenty of room behind the drive rack to hide wires. I was able to get a cleaner look with this case than a much more expensive one I reviewed previously. One thing I noticed about the screw-less drive locks is that they don't hold the drives in all that tight. Well, the side they're on is fine. The other side that doesn't have locks on it, is the problem. The optical drive wiggles a bit if you push on it, like when you push on the tray to get it to close. Since the holes are there, you can still still go "old school" and use regular old screws. I know that's what I'd end up doing. 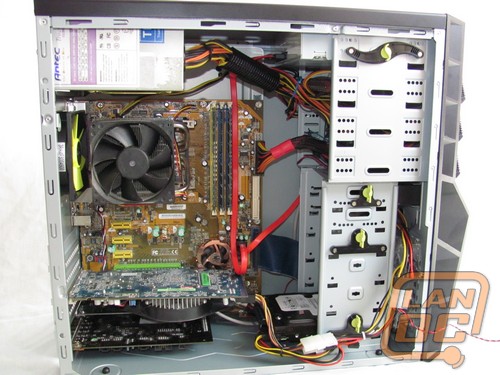 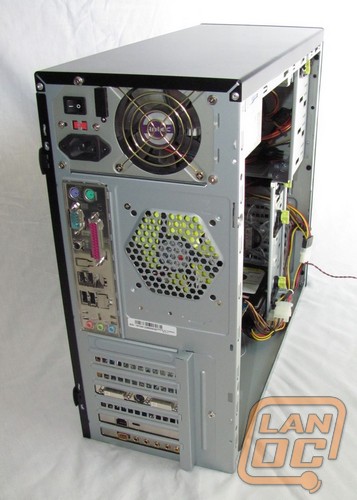 Here's some shots with everything put back together. I added my own blue LED fan to the front of the case, and you can see how good it lights up the entire inside. It accents it quite nicely, if you're into that sort of thing. Filling the inside with light, grants you the ability to see just how small the front intake hole really is. Sad trombone time...Wah wah wah. 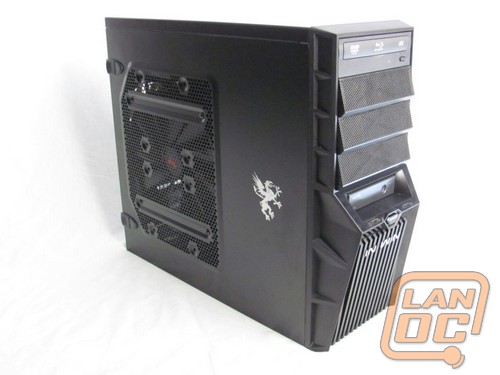 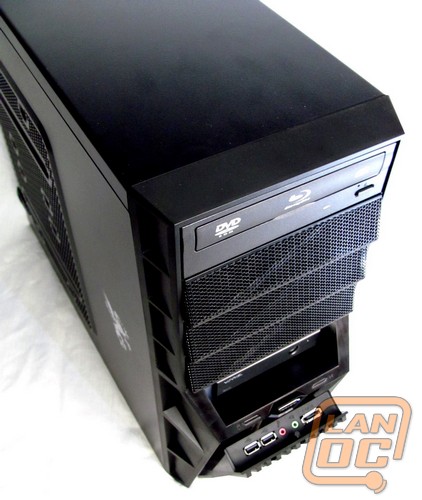 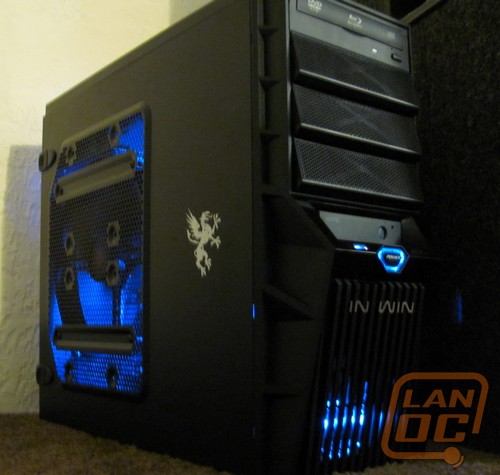 Air flow wasn't thought out very well. Sure, that big fan on the side is great, but where does the air go after that? There's only the power supply and the 92mm fan as exhaust. You do have the option of adding another fan on the front, but typically those fans blow air in, across the hard drives. I suppose you could turn that fan around and have it blowing outward, but you've seen how big that hole is. Not much is getting through there anyways. The only other place for air to escape is the holes in the slot covers. This is why positioning the power supply in the bottom of the case is such a good idea. This would have left the top open to allow for fans blowing out. While I'm sure the Griffin is adequate enough for the average budget build, don't expect to cram your massively overclocked system in there and get the best thermals.

This is a hard one to score. The $39.99 price tag is so low that it's hard to be too critical of the negatives, which there are a few... Thin metal, no paint on the interior or back, limited exhaust flow, break-off slot covers, and a simple interior. On the other hand, the outside of it looks pretty nice. It's far from the typical beige box. The front is sculpted nicely and is pleasing to look it. The screen-print of the griffin, on the side, gives it a more custom look. And the inclusion of the screw-less drive locks and side panels makes installation a tad faster. And to top it off you get that big 220mm fan. In fact, if you were to buy it separately, it would cost you almost half the price of the entire case. If this was an infomercial, you would hear, "But wait there's more".

As I sit here contemplating the score I'm going to give it, I think back to the last case review I did. With that one, I added a point to it's score for it's low price. This time I don't think I'm going to do that. There's just not enough going for it on the inside, where your computer actually is, to justify it. You can cover a brussel sprout with chocolate, but at the end of the day it's still a brussel sprout. 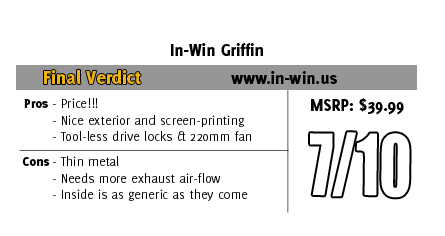