"Limited edition" is not a term unheard of in the gaming industry. Normally it's a term branded about in the realm of game consoles not PCs. Recently Cooler Master has been spreading exclusives to PC gaming. Do you recall the CM 690 NVIDIA edition? It was a full tower featuring the company's color scheme and logo. The bar has only been raised since then and Cooler Master has gone above and beyond with the new AMD edition of the HAF 932, they've even sent us a sample to check out for ourselves.

Packaging
The box art features a simple black background, careful not to dwarf the images of the HAF 932, which while amazing still hardly do the case justice. The reverse side gives an alternate-angle shot, and lists a few more details about the case. Inside, you'll find a small manual and a bag of accessories including: power supply stand-offs, various screws, a 5.25" to 3.5" drive bay converter, and a 4-pin power extension. 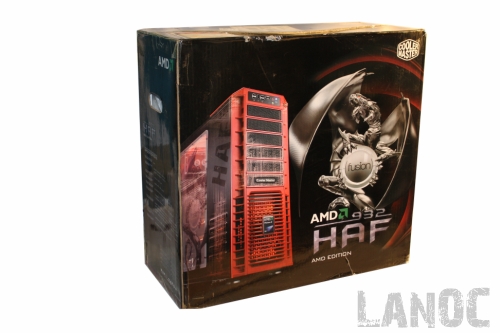 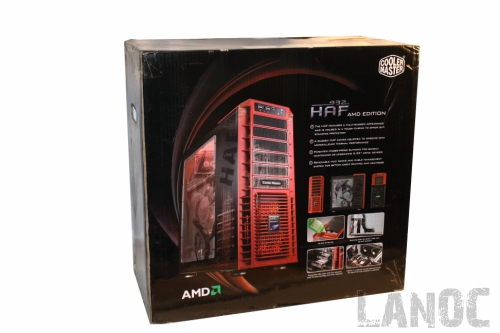 Installation
Power supply installation should present no problems, with an independent air in-take on the bottom of the case for units that need to be mounted upside down. The PSU bay also features the option of two 120mm fans. The back of the 932 holds an installed 140x25mm fan, running at 1200RPM to pull heat from the heat-sink/video card. The front has a factory installed 230x30mm red LED  fan behind the plastic grill running at 700RPM. Atop the case is another installed 230x30mm red LED at 700RPM, which can also be traded for three 120mm fans. The AMD edition also supports a cut out above the I/O panel for those wishing to run water cooling. 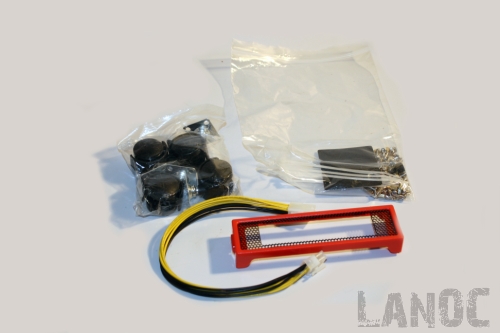 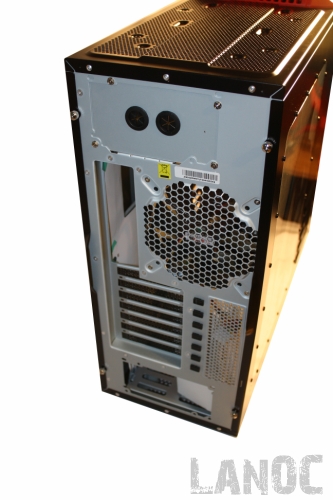 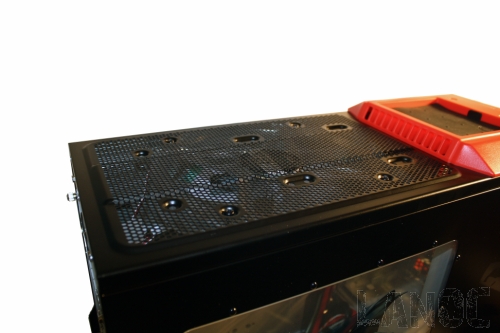 The motherboard tray comes with an insert detailing various types of motherboards and where each will need a stand-off placed. The chart also lists and displays areas in which cable management can be best utilized. 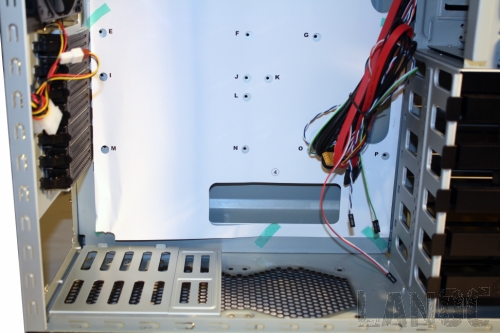 There are a total of six exposed 5.25" expansion bays, one being required if you wish to use the included 3.5" converter. The bays are occupied with a plastic placeholder that match the front of the case so empty bays aren't a blemish to its appearance. These simply pop out when you wish to use the bay and actual mounting of the drive is tool-less. A finger-press button extending a rod into the screw holes to secure devices; similar to other Cooler Master models. 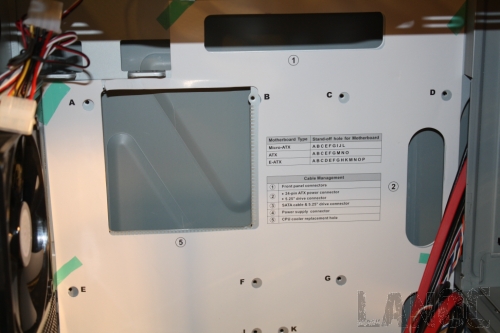 The 3.5" internal bay for hard drives feature a door mechanism that clips securly when shut and pulls out easy installation without tools. The AMD edition supports up to five 3.5" internal drives. 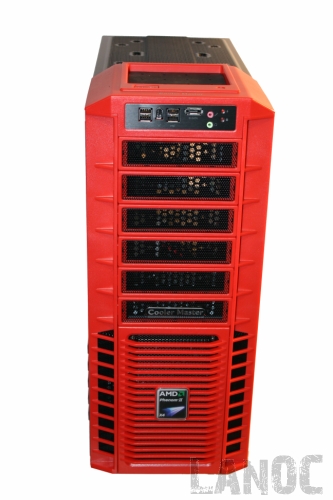 PCI expansion slots are occupied with a mesh placeholder when not is use. Held in place with an elbow that applies pressure to the bracket to securing it in place. This tool-less design is also used when devices are in place. There is a total of seven slots.

The I/O panel includes all the regulars, with four USB 2.0, one IEEE 1394a, one eSATA, and one mic and audio port. 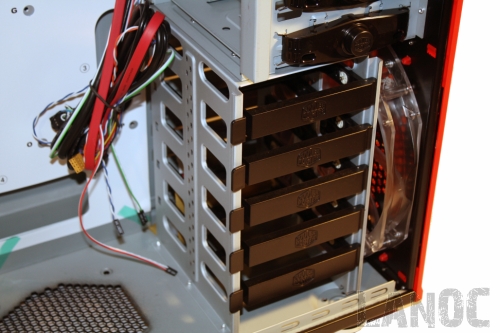 Performance
For a full tower, the weight is nothing out of the ordinary. Carrying the case to and fro may be a little awkward with no handles or grips of any kind but you grasp the front of the case without concern. The finish is a colored plastic rather than paint which means no scratching. I did find the color interesting. It gives the case a very vibrant, almost toyish or childlike appearance.

The side panel of the AMD edition is equipped with an acrylic see-through window and one of the most notable features of the case: the AMD dragon holding the fusion logo. The image looks absolutely amazing and doesn't dominate the view of the inside either. While the exterior of the case is painted a slick black, it ends at the interior, replaced by the dull gray of the metal. The paint even falls a little short on the panel itself, the top border lacking half of the black. 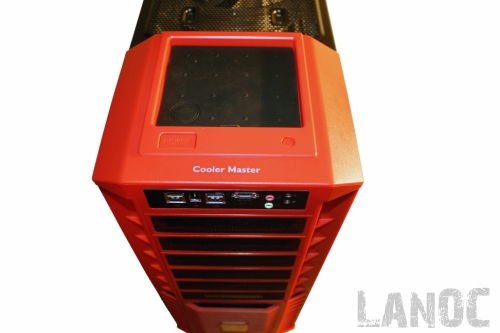 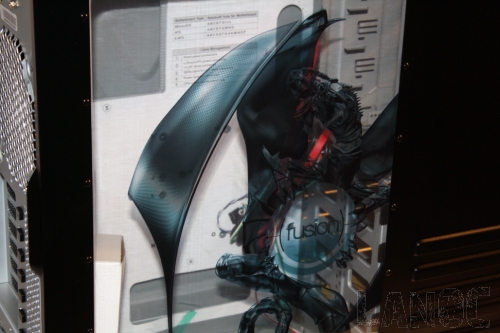 Overall
The AMD edition of the HAF 932 is sure to stand out at any LAN party, with a bright vibrant front grill and accentuated AMD dragon etched on an acrylic window this case will catch the eye of you fellow LAN mates. Aside from the appearance, the AMD edition isn't much different from other Cooler Master cases. Featuring tool-less installation of drives , PCI expansions and an overall simple layout you shouldn't have any trouble installing components. However there are a few areas in which the AMD 932 is lacking. The largest being the almost seemingly incomplete paint job. Despite this minor set back, the tower still looks stunning and is a great option for AMD fans to show their colors. 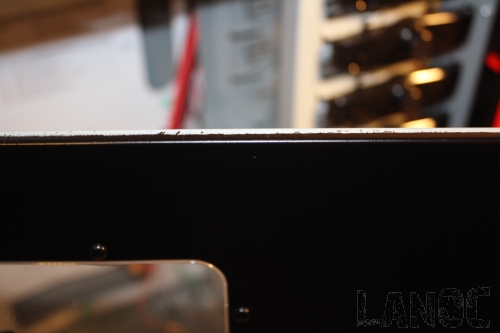 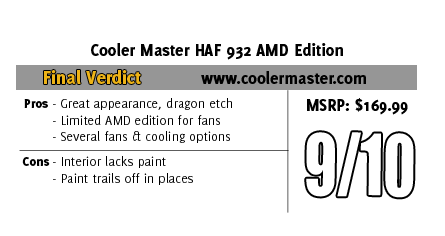 Author: Lersar
Contributing Editor / Event Staff
Adam is a big proponent of LAN parties, esports and speed-running, and helps organize our semi-annual LAN events. He has covered hardware and software reviews of a wide variety, but most content these days come from event coverage, such as other LAN parties.
Discuss this article
Log in to comment
Posts in discussion: Cooler Master HAF 932 AMD Edition

We have 1045 guests and one member online