A case is the most essential piece of hardware for any computer, and holds a lot of potential to affect its owner's experience: convenience, cooling, efficiency, and appearance to name a few. In the gaming industry, these aspects are all the more important. The market is currently flooded with makes and models, each trying to satisfy every area or specialize enough in one to to become unique. In-Win's Maelstrom case is one of the former's leading contenders, and they've sent us a sample to find out why.

Packaging
The Maelstrom is pacakaged in a hefty box that in actuality is large enough only for the case itself, cushioned on either side by foam placeholders. The front of the box sports an image of one side of the Maelstrom, while the reverse side depicts the opposite panel. The front doesn't go much further than the logo, slogan, and image, while on the back 12 icons detailing some of the features of the tower. On the remaining two sides are smaller images further exemplifying those features and a tables listing the specifications. Any consumer should have a pretty good idea of exactly what they're getting. 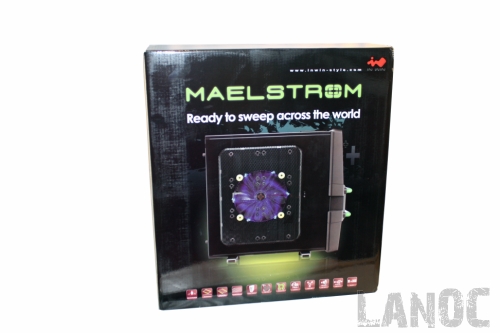 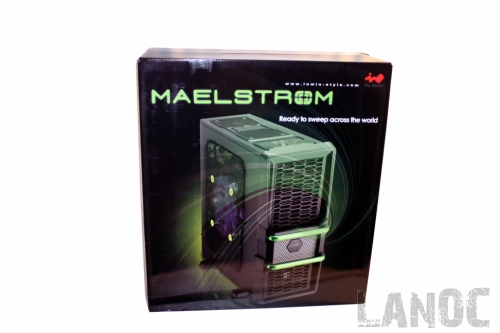 The tooless drive mounts are cleverly hidding in a 5.25" expansion slot, pulling out the tray to reveal the rails. This is common uniqueness between In-Win cases, and one that helps to minimize the amount of free-falling objects stored inside the chassis. 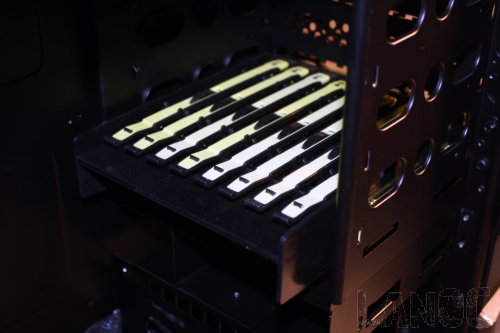 Installation
Opening the case is a fairly simple process, with In-Win's design being a tooless one. Two thumbscrews will release either panel. The front plastic panel can then be removed, but can be a bit stubborn, and is necessary to install 5.25" expansion devices, 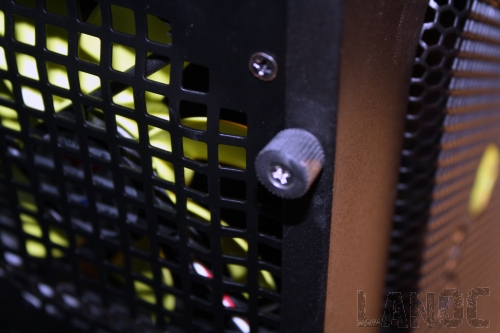 We'll begin with the cooling aspect of the Maelstrom. In-Win has made the full tower water cooling ready, with holes positioned for installation. For those deciding with the fan route, the large 22cm fan on the left panel is hard to miss. An external speed switch has also been included to allow easy customization of the fan, and the fan itself is a blue LED. If putting all your eggs in one basket concerns you, In-Win has thought ahead to included holes to replace the monster fan with six 12cm fans, and has even included the mounting screws. On top of the case, there are two 12cm fan openings, with one already factory installed to match the color scheme of the Maelstrom. The front features a factory-installed 12cm fan to help remove heat from the hard drive bay, and the back sports a 12cm pulling off the heatsink/video card. 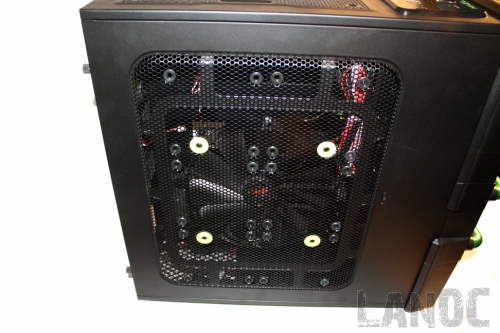 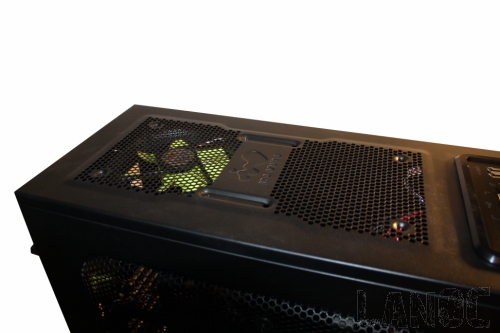 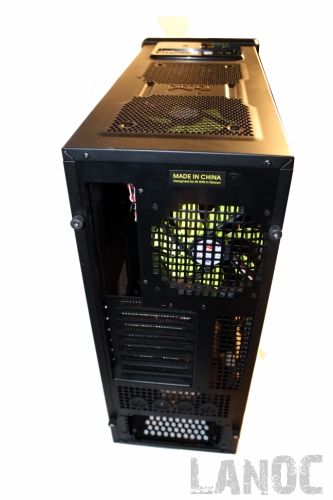 Power supply installation is very painless, supporting PSU's up to 180mm in length and a vent for air flow from the supplies' fan. In-Win has included pads that elevate the unit to further aid in air flow. Mounting is your average securing, with screws including. Motherboard installation is yet another smooth process, with included motherboard standoffs and screws. 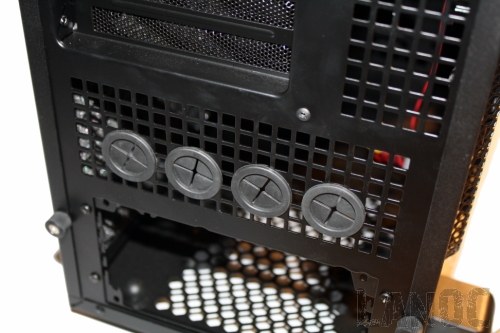 The included I/O wires are a USB header, IEEE 1394 header, two SATA connectors for eSATA ports, HD/AC '97 audio headers, and power/reset connectors that plug into the motherboard. These cords have plenty of length on them, reaching well past the back of the case, so the only problem you may have here is cable management.

Optical/floppy drives are installed using the tooless rails, that are also shock-free. Two rods protrude from each to take the place of mounting screws, and convert the drives into a sliding device. The Maelstrom supports up to five 5.25" expansion drives and a 3.5" drive converted from one of the 5.25" bays, and six internal 3.5" drive bays. The metal front of the chassis sports removable metal placeholders for the bay slots, while the exterior plastic front has plastic slots hat must be removed for occupying bays. Each placeholder is lined with a vinyl mesh to help with air flow while keeping dust and particles out while not in use.

The Maelstrom supports up to seven PCI expansion devices with temporary holders in place for slots not in use, similiar to the front expansion bays. Installation here, oddly, is not tooless as seen in many of In-Win's other models; you'll need to use the old screwdriver to remove and secure add-on cards.

Performance
Installation is majorly simple and should present little to no problems. The empty chassis itself weighs about what you'd expect from a full tower, and is going to be that much more with installed hardware. There are two handles on the front, but sadly these are only a tease; In-Win has gone to lengths to make sure the user knows not to use them to carry the case with.

The top I/O panel sports four USB and two eSATA ports, which is great for accomdating those with externals and other devices. With the option of water cooling and several fan possibilities, you should have no problems keeping your hardware's temperature down.

With all those fans, however, the issue of noise does come to mind. Not to worry, In-Win has lined the panels of the Maelstrom with an acoustic absorbing material to minimize noise levels and vibrations. 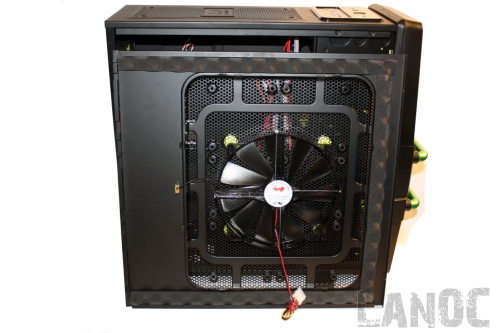 The material is a solid metal, with a black exterior paint that looks great, helps with grip, and prevents environmental damage such as humidity. However, such as any paint, it is fairly easy to scratch, including the green coating on the front handles.

Overall
Going back to the introduction, the Maelstrom does a good job delivering in each of the listed areas. It's convenient in it's tooless entry and acoustic reduction, plenty of cooling options for both fans and liquid, efficient in it's protection from envrionmental damage and compatibility, and looks very impressive with its unique color scheme, facade, and 22cm blue LED fan. Past In-Win chassis seemed to be designed around a specific theme, such as the X-Fighter and the Gundam, whereas the Maelstrom, while having an obvious scheme, focuses most on specifically satisfying the needs of gamers. With a helpful installation guie for each piece of hardware and plenty of accessories and features, the Maelstrom is a great option for any gamer, from beginner to expert. 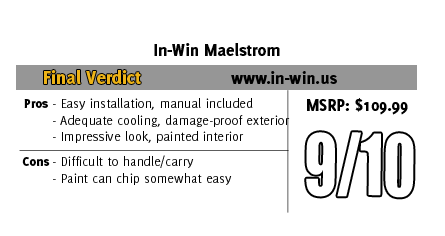 Author: Lersar
Contributing Editor / Event Staff
Adam is a big proponent of LAN parties, esports and speed-running, and helps organize our semi-annual LAN events. He has covered hardware and software reviews of a wide variety, but most content these days come from event coverage, such as other LAN parties.
Discuss this article
Log in to comment
Posts in discussion: In-Win Maelstrom