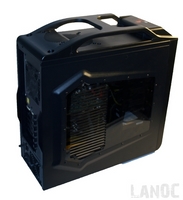 Cooler Master introduced their line of gamer focused cases at the beginning of this year. I was lucky enough to win a computer that included their Storm Sniper case, I have been using it for a few months and have been very impressed with the small details. Today we have the pleasure of taking a closer look at Cooler Master Storm's newest chassis the Scout. The Scout is a mid tower with a focus on portability for gamers who need to transport their rig to LAN Partys and tournaments, in other words its right up our ally! 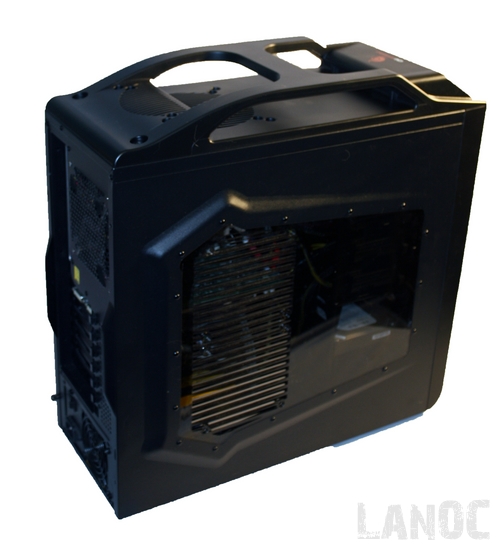 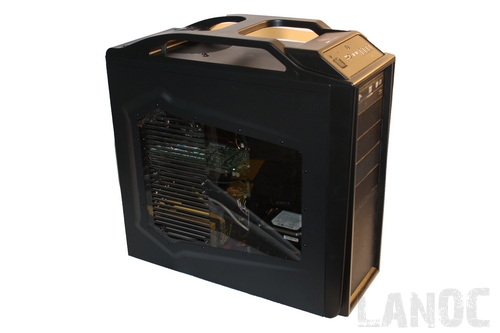 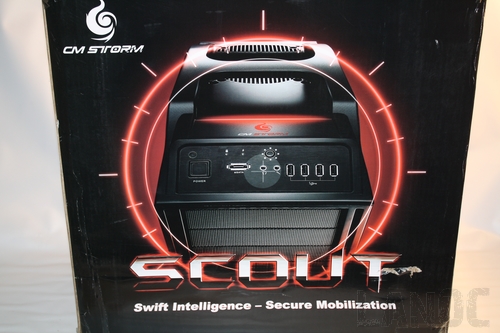 If you have visited our site recently I am sure you have seen the scout ads on every page. The packaging has the same design but much larger on one side. The design manages to show off a good portion of the Scouts features including the front panel and handle up top. The back of the packaging has a menacing guy on the back along with a list of case features. On the bottom of the back you will find a few recommendations from professional gaming teams along with pictures to go along with the afor mentioned feature list. 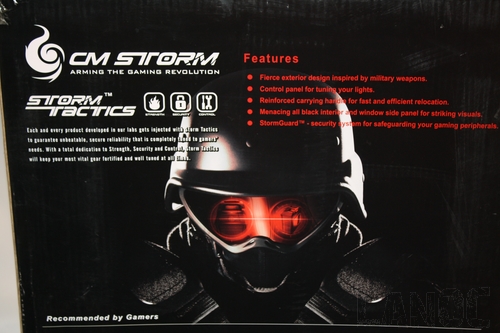 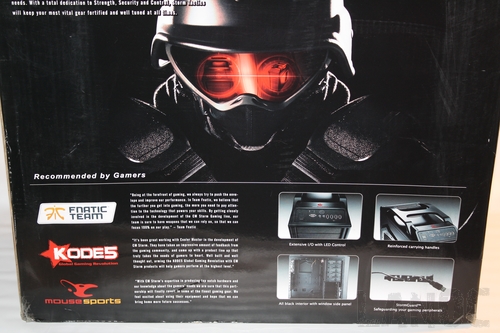 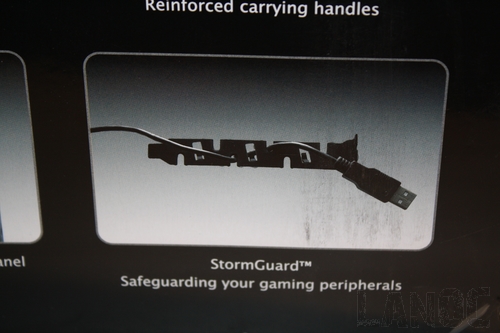 A portable Mid-Tower rig wouldn't be portable without the convenient carrying handle up top. Attached to the handle is the entire front panel which includes power, reset, HD and power lights, headphone and microphone ports, one eSATA, four USB 2.0 ports, and a button to turn the internal lighting on and off. The all mesh front bezel will help with the airflow when you start packing high-end components into this (in comparison to the sniper) small case. On the right side the side panel has a small bulge in it similar to the HAF 922 and Sniper that I have found makes wiring much easier. The left side panel is home to a tinted side window that looks amazing (are you listening Antec?). The back of the case is fully blacked out including every screw and thumbscrew; this is the kind of detail that makes a good case great. 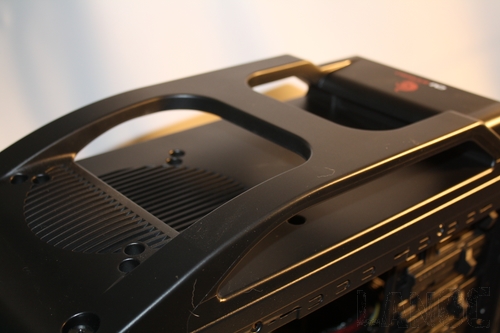 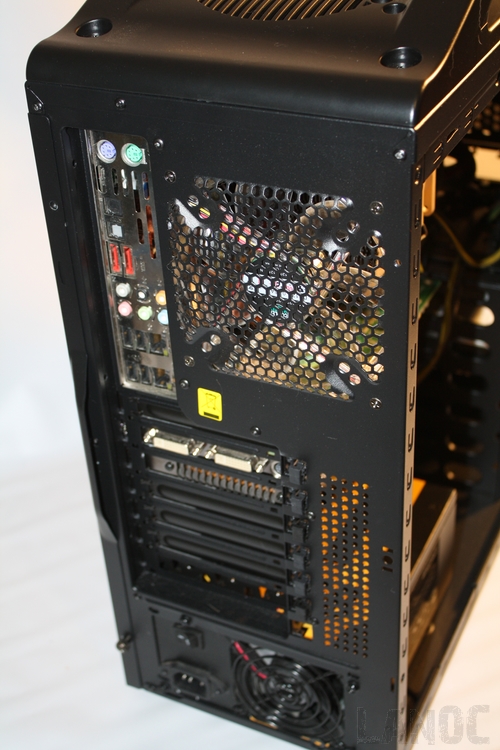 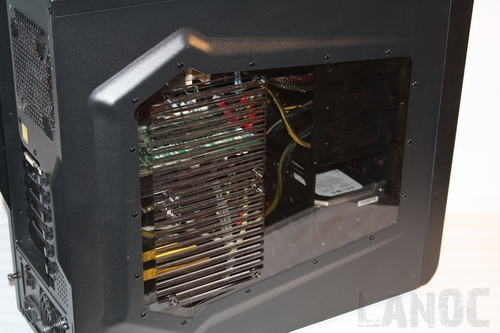 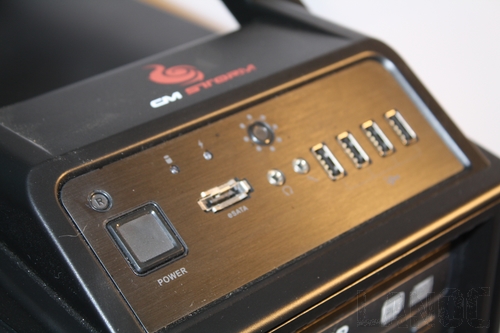 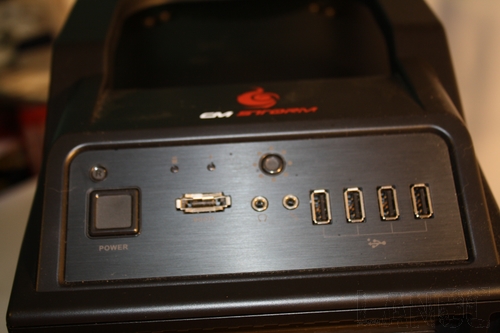 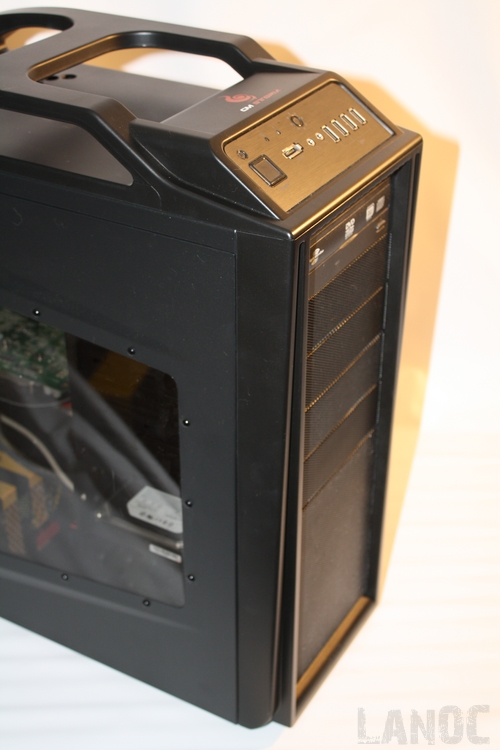 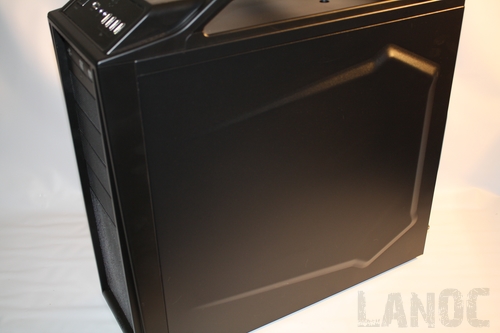 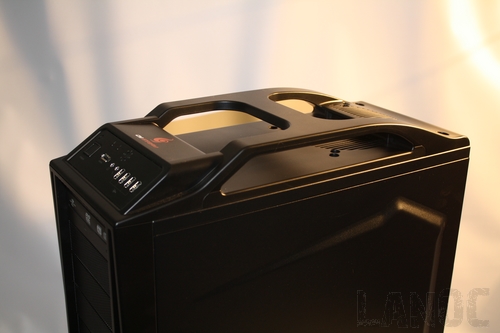 I can’t help but notice right away how Cooler Master included a full black interior on the Scout, this was very exciting for me considering how many times I have complained about most cases not including it. The large CPU access hole was also great to see along with a cable management hole placed just in front of the bottom mounted power supply. Similar to the HAF 922 and the Sniper, the Scout has both five hard drive trays and five 5 1/4 inch drive bays. In place of the normal 5 1/4 inch drive retention brackets that we saw on the HAF 922 Cooler Master used more secure brackets similar to what we found in the Sileo, this should keep disc drive noise down. The 3.5 inch drive bays are also the same design found in the Sileo, dropping the hard drive trays in favor of simple guides that you place on the side of the drive. Cooling for the Scout can be found in the way of 140mm fans on both the front and top and one 120mm fan on the rear. Both the front and rear fans have red LED lighting, and if the three fans are not enough you have the option to add two 120mm fan's to the Acrylic window on the side panel. 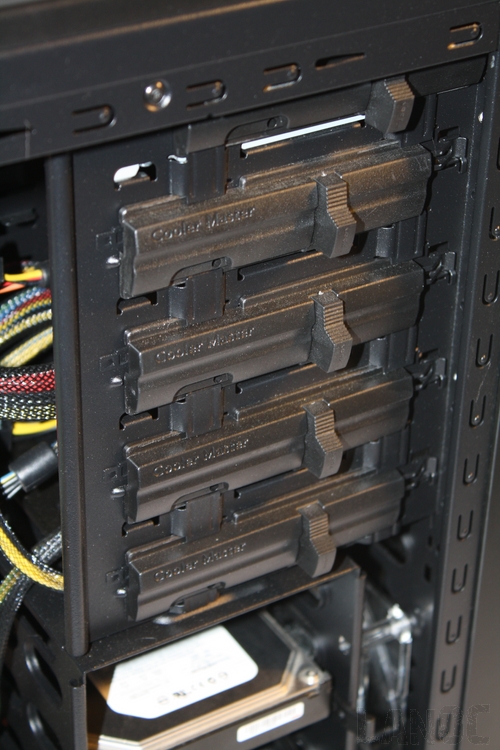 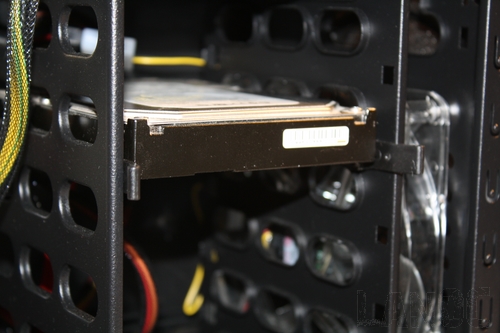 Another notable feature of the Scout is what they call the "StormGuard" security system, basically a PCI slot panel that is cut in a way that you can secure your gaming peripherals at large lan partys, why didn't anyone else think of this? Lastly in the box of goodies that came with the case I noticed a small gem, with SSD's starting to become all of the rage I was happy to see they tossed in a 1.8/2.5 inch to 3.5 inch adapter. It's about time that someone took notice that gamers are going to need 2.5 inch drive bays soon, almost every case manufacture includes grommet holes for external water cooling even though it's a nitch market but something as simple as a 2.5 inch drive bay that should help the case age well has been neglected until now. 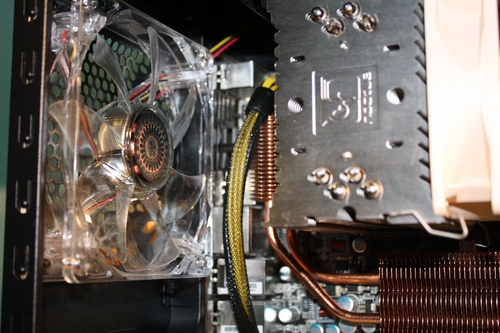 My installation and setup of this case was made interesting due to the arrival of the case just before our lan party. After taking a peak at the case I just had to show it off and decided to build the computer AT the building the night before the lan after we had everything setup. To make a long story short, things took a lot longer to setup than anticipated and I ended up putting together the computer late that night. Even in the chaos of setting up for our lan I was quickly suppressed at the quality and level of detail of the Scout. One thing that stuck with me the most was the entire box of screws was pack full with black screws to match the menacing black interior. This stood out to me because most manufactures wouldn't even think about tossing in a standard pack of screws, if Cooler Master was worried about details as small as the motherboard screws they must have perfected everything else (and this shows). Much to my surprise the installation went amazingly smooth, infact due to the short amount of time it took me and the lack of profanity coming from my area almost none of the other staff members even noticed that I put it together. 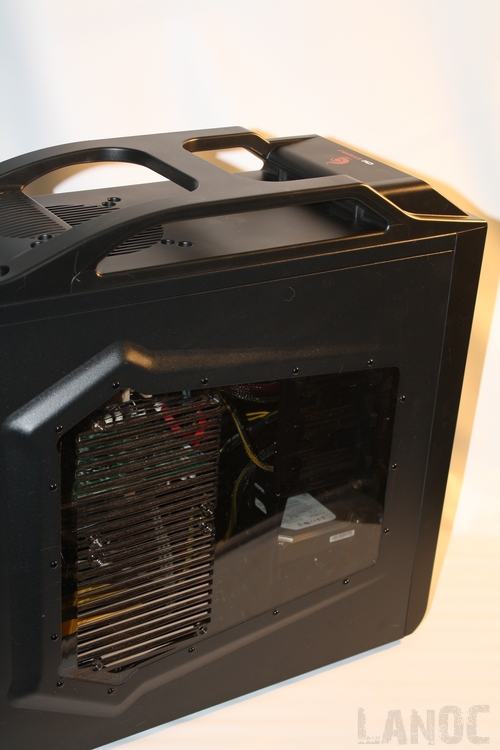 After setting up the rig it was ready for heavy use over the following two days at our LAN party. Doubling as a TF2 and COD4 server along with being an extra rig for people to play COD4 on the Scout was very popular. To go with the full black setup (and mostly to give me laughs throughout the event because I was sitting next to the rig) I used the fully blacked out DAS keyboard with the Scout (unrelated but picture random people trying to find the WASD keys on a foreign setup, LOL). 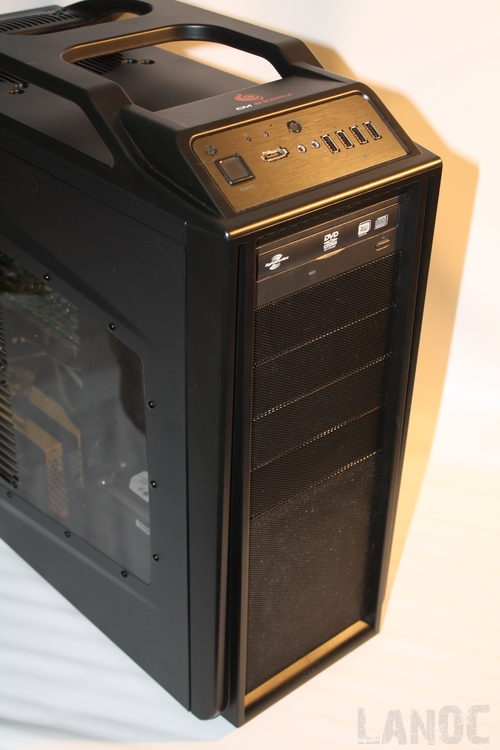 The first thing I did with the case was test out the top handle, which I can say, performs flawlessly. Considering how many times a year I pack up both my wife and I's rigs along with the game server, I can really understand the need to have a portable but full sized gaming rig. If I had any worries about the cooling performance of the Scout at the beginning they were all gone by the end of the weekend, with a gaming rig being pushed to its limited for two days strait without any spikes in temperatures. Of course any case can cool well but how much noise does it put out? The large 140 and 120mm fans spin at a low speed due to their size making for respectable (almost inaudible) sound levels. 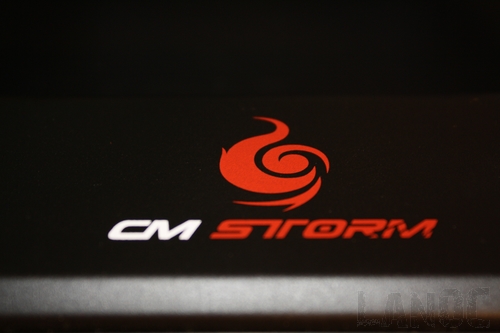 There are sometimes products that make you wonder why no one else has done that before. With good looks and amazing performance the Scout is one of those products. The Scout really stands out with the small details like the tinted side window, black screws, and the 2.5 inch bay adapter. There is no doubt in my mind that Cooler Master picked the brains of (and listen to) countless gamers and enthusiasts to put together a case of this quality, Antec better watch out! Price at just over a hundred dollars the Scout is poised to be a very popular case if people take notice, and I hope they do. 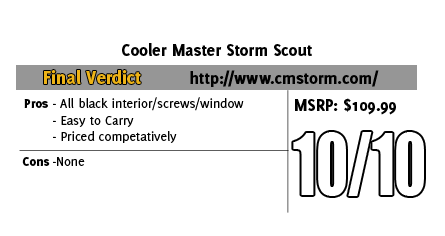 You might call him obsessed or just a hardcore geek. Wes's obsession with gaming hardware and gadgets isn't anything new, he could be found taking things apart even as a child. When not poking around in PC's he can be found playing League of Legends, Awesomenauts, or Civilization 5 or watching a wide variety of TV shows and Movies. A car guy at heart, the same things that draw him into tweaking cars apply when building good looking fast computers. If you are interested in writing for Wes here at LanOC you can reach out to him directly using our contact form.
Discuss this article
Log in to comment
Posts in discussion: Cooler Master Storm Scout Case