Packing up your entire rig to take it to a lan party is a pain in the butt. So much so in fact that at our lan parties we normally see 3 or 4 laptops show up. Of course with laptops you don't have the ability to run the same level of components in most cases. Because of this there has been a demand for small form factor systems that are powerful but easy to transport. The smaller cases also are ideal for HTPC use. In my case I have been looking for the perfect HTPC case for our living room without any luck. I decided to talk to Thermaltake about their LanBox series of cases to see if it would fit the bill. 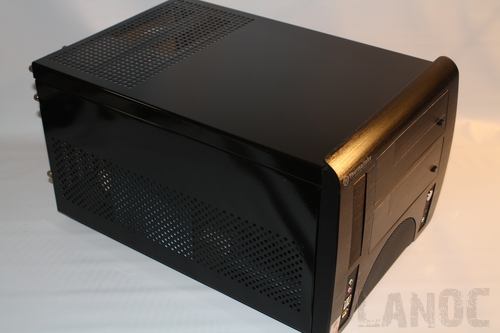 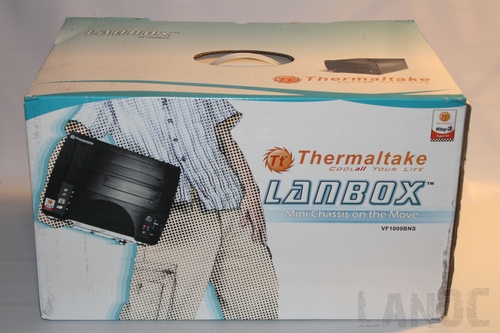 With the LanBox being a SFF case it wasn't packed in the normal plain case box. Its small enough that Thermaltake was able to put a handle on top to make the box easy to carry. The front of the box reminds me of an old Bugle Boy advertisement with someone holding the LanBox. The back of the box has pictures of the case broken down, from each angle, along with detailed pictures of the most important features. If you are looking for the specifications, you will find them on the side of the box. Inside, the case is wrapped in a soft cloth bag to keep it from being scratch and then secured with foam on both ends. I was most impressed with the box because it could easily be used later to take your case to lan partys, although I wouldn't trust the top handle with all of that weight. 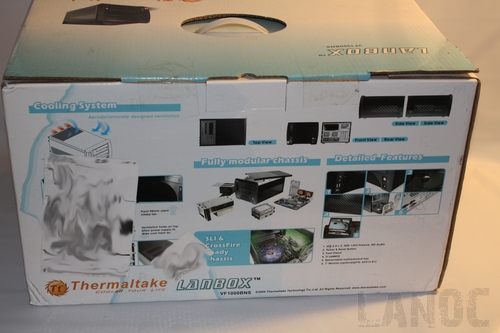 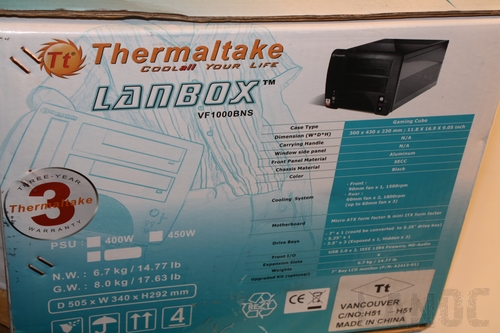 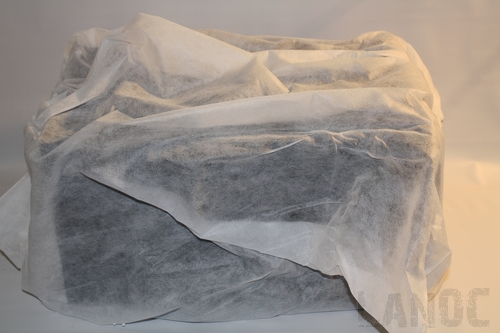 The LanBox is a fairly small case but not nearly as small as the shuttle that we looked at a few months ago. Of course, with room for a 7 inch drive along with a 5 1/4 disc drive you have to expect it to be a little larger. Starting at the front there are three drive bays. One 3 1/2 drive bay incase you still have a need for a floppy, or a flash card reader. The LanBox has two drive bays available for a 5 1/4 disc drive, the top of the two pulls a 2nd duty by giving you the ability to install one of Thermaltake's 7-inch touch screen LCD monitor in it. The front I/O panel has all of the basic necessities (Microphone, headphone, two USB 2.0 ports, power, reset, and status lights). Both of the sides are uneventful with cooling holes front to back and a high gloss paint job. The top panel is similar to the side panels other than it is removable. The back panel is the first time things look crowded, the full ATX power supply takes up most of the back of the case. The other half of the back is taken up by the removable motherboard tray. The one thing that stands out the most on the back panel is the 11 thumbscrews holding everything together, they all have a purpose but 11 seems like a few too many lol. 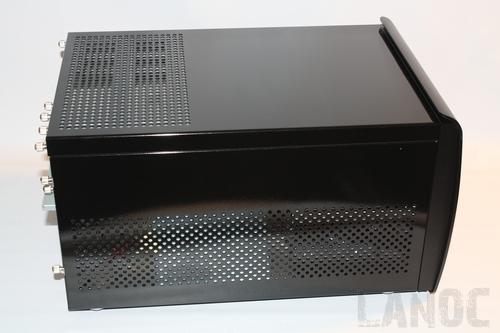 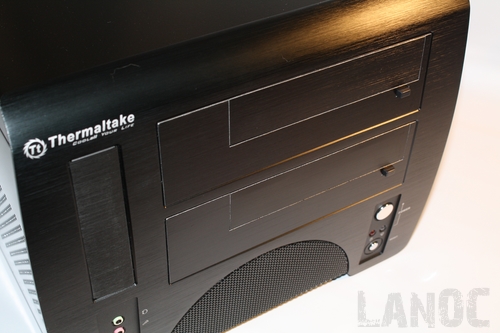 Being a Small Form Factor system the inside of the LanBox is very tight. The removable motherboard tray was included because of this. The brackets for the optical drives and the power supply are both removable to give you access to the hard drive cage and to hookup the wiring. As for cooling there is almost none with two 60mm fans in the rear and an 80mm in the front. 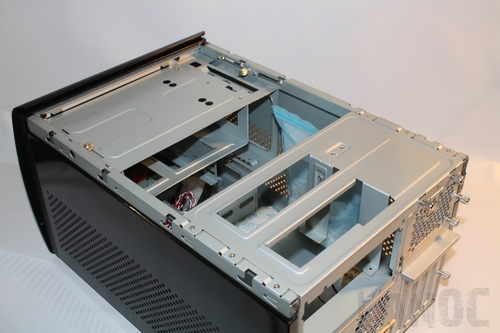 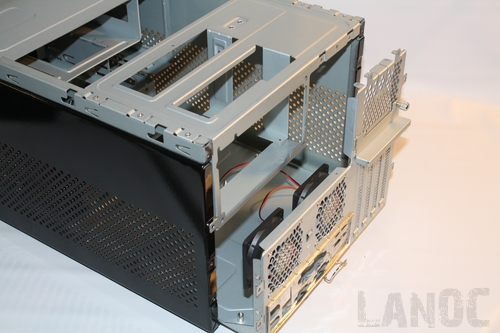 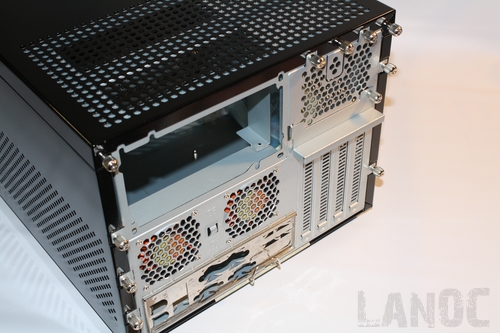 I started the install by removing the power supply cage, disc drive cage, and motherboard tray. With everything easy to get too I had to trouble installing the hard drive and Blu-Ray player. The same goes for the motherboard, installing it out of the case made life simple. When it came time to put everything back into the case, this is when I realized how bad of a wiring mess it would end up being. Of course considering the size of the case, and it uses a standard ATX power supply unlike shuttle's a little bit of a mess can be expected. The main issue I did run into was with the 5 ½ bay. Being a HTPC I had planned on adding a LCD and remote receiver but wasn't able to. The drive bays are apparently only designed to hold the 7 inch LCD or to be used with disc drives.

With everything together and running I setup the system in my living room hooked up to our 52 inch DLP TV. With the LanBox being used as a HTPC I was concerned most about the noise level of the LanBox. It didn't take me long to realize that the small fans used had to run at fairly high RPM to push the air in and out. The noise output was less than my Xbox 360, but more than my gaming rig. If Thermaltake were to swap out the smaller fans for large slow fans, noise would not be a problem. Of course with any case, cooling is also very important. If you don't keep your computer cool it will shorten the life of the components and cause interesting performance issues. Considering the LanBox's target audience of gamers looking to take their rigs to lan partys the LanBox has a tall order to fill. In the end the small fans were not enough to keep things cool, I ended up having a few overheating issues on hot days. I'm sure my messy wiring job didn't help he situation. The last issue I wanted to test was the ease of transportation. Being such a small case, it is important to me that the case be easy to pack up and take to a lan party. I decided to pack up the LanBox along with our TV to use at our most recent lanparty. The size of the LanBox made carrying the case much easier than the other rigs, I would love to see a version with a handle on it to make transporting that much easier. If you are like me, you are in luck because Thermaltake does make a version with a easy to use handle integrated on top.

As a case overall, the LanBox isn't flashy, or overly styled. The design is based almost entirely on packing everything into a small box to make it easy to pack up and take to a lan party. At that task the LanBox succeeded, I found the case to be small enough to pack into my car for easy transportation to lan partys. Of course, with a case of this size there are other issues to contend with like cooling and noise. Keeping high-end rigs cool can be a challenge for most cases, with only a few small fans the LanBox was fighting a losing battle at times. Those same fans didnt help keep the noise down, I would love to see this case sporting a couple 120mm fans to keep things cool and quite. If you are looking for a case to pack your Lan rig into including a full sized power supply the LanBox could be up your ally. In my case using it as a HTPC, I could have been happier. Of course considering I was hoping to use the LanBox in a way that it wasn't really intended to be used, this shouldn't be a surprise. 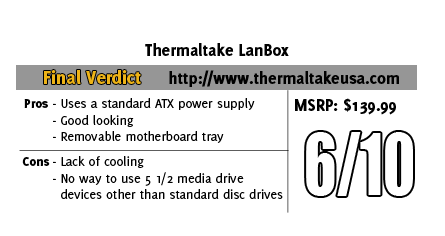 You might call him obsessed or just a hardcore geek. Wes's obsession with gaming hardware and gadgets isn't anything new, he could be found taking things apart even as a child. When not poking around in PC's he can be found playing League of Legends, Awesomenauts, or Civilization 5 or watching a wide variety of TV shows and Movies. A car guy at heart, the same things that draw him into tweaking cars apply when building good looking fast computers. If you are interested in writing for Wes here at LanOC you can reach out to him directly using our contact form.
Discuss this article
Log in to comment
Posts in discussion: Thermaltake LanBox