If you were to compare the PC case market to motorcycles In Win would be similar to Orange County Choppers. Each case they make is designed around a central theme. In the past we have seen cases designed after the B2 Bomber and race cars. Today I will be looking at the X-Fighter, I'm sure you can guess what the theme of this case is all about. I'm going to run the case through its paces to see if it would be a good fit for today's high end gaming PC's. 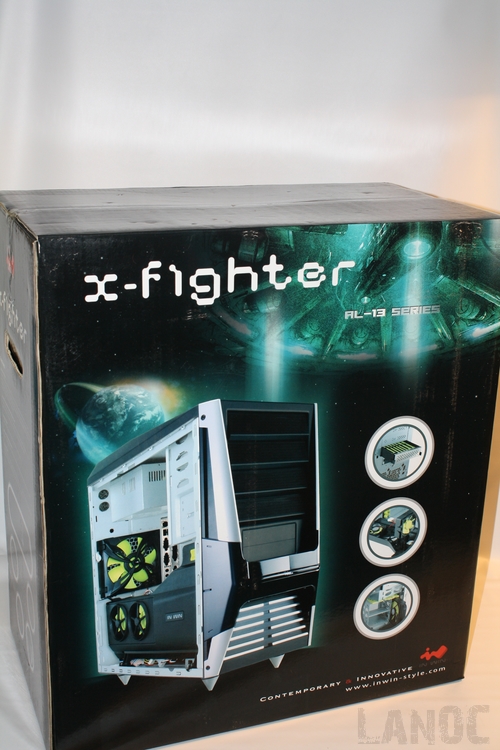 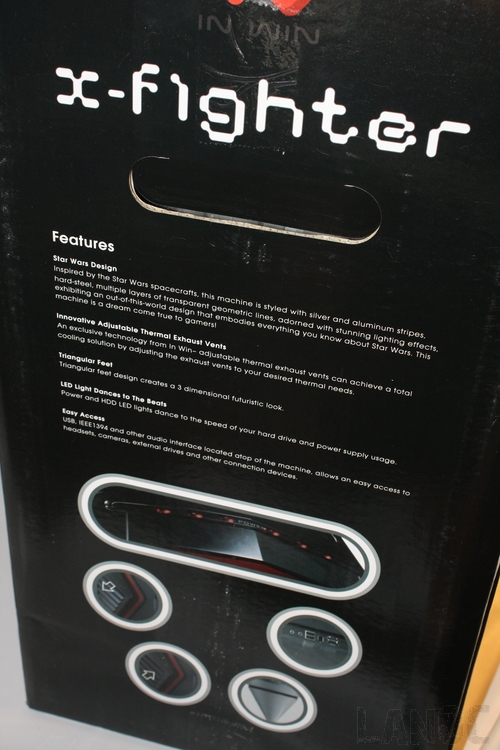 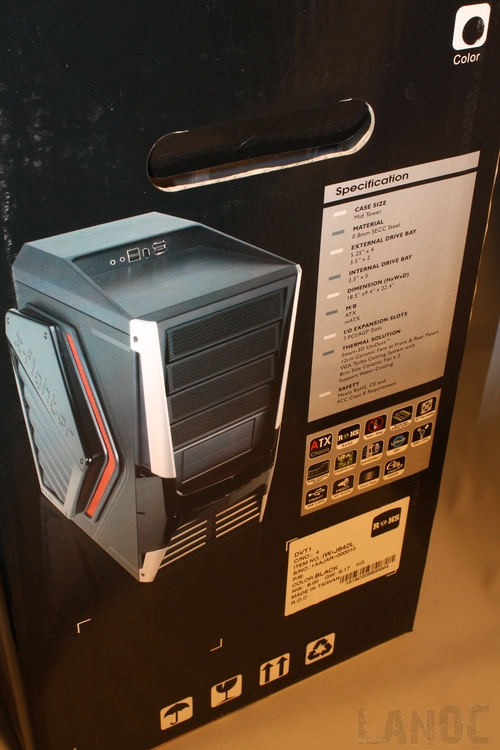 As per the usual the X-Fighter was packed in a standard case box. The front of the packaging has a large picture of the case floating in space with a space ship and earth. Along side of the case on the front are a few close up pictures of important features. Onto one of the sides you will find even more pictures of features, but this time there is also a writup explaining each photo. On the other side you will find the specifications listing along with another picture of the case. Inside the box the case was wrapped in plastic and then secured with the traditional foam on each side. I did like how they included a notch in the foam to store the case screws and PCI slot covers. 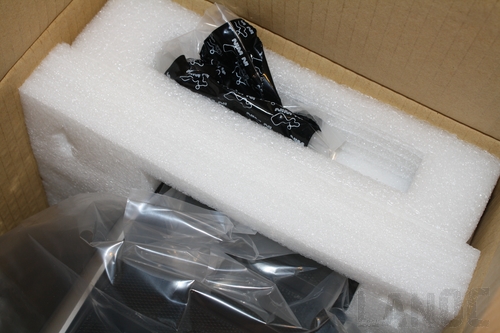 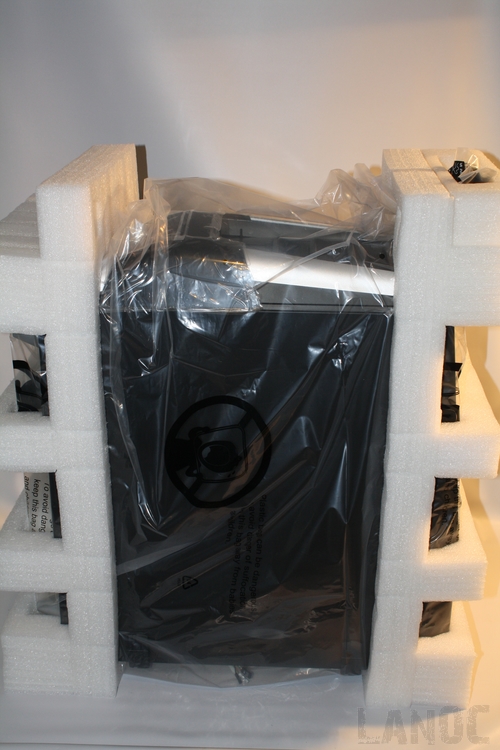 The design of the X-fighter was inspired by the spacecrafts in the Star Wars series. Because of this the X-fighter looks like no other case available. The top of the case looks similar to the Thermaltake V9, beyond that I couldn't find a design cue even close to anything else on the market. The front I/o panel is u top inside of an area where you can store small items. The front has mesh drive bays to help air flow along with what has to be the most creative placement of the reset and power buttons. There is a guard on the front that looks like a handle, on the front there is a wide power button. On the back side of the guard they tucked the reset button away. On the left side there is a large vent on the side panel with red mesh to pull air away from the video card and CPU. The side panel uses two clips to stay on rather than the traditional thumbscrews. The back of the case is layed out exactly like the Gundam case that we looked at a while back from In Win, I suspect that they share the same chassis. 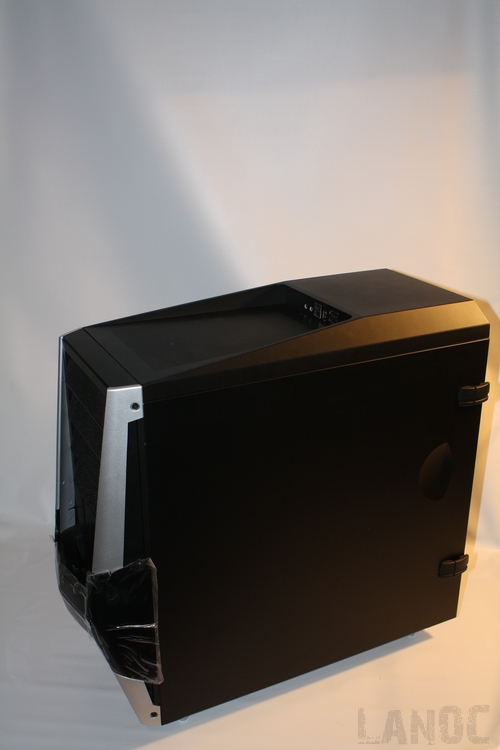 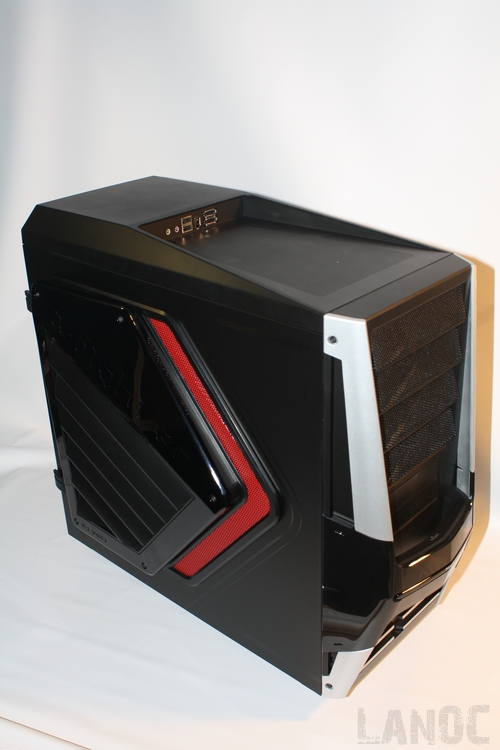 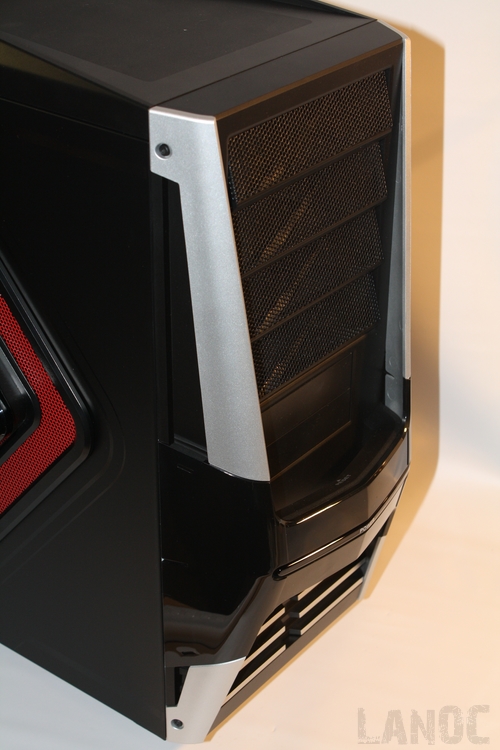 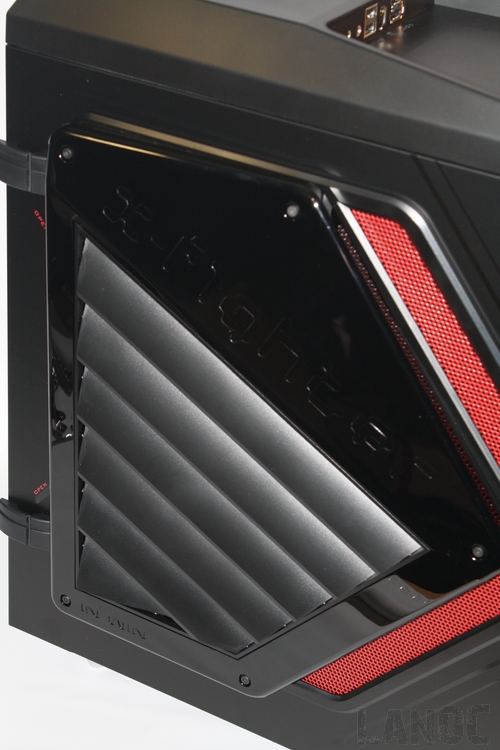 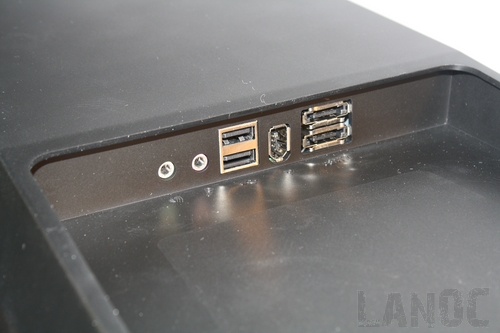 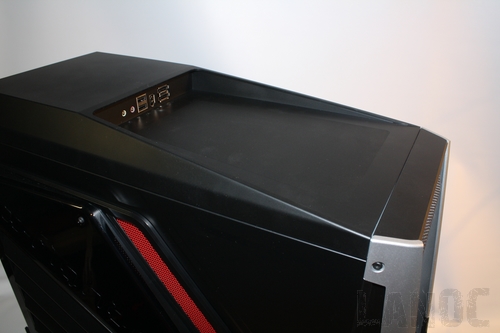 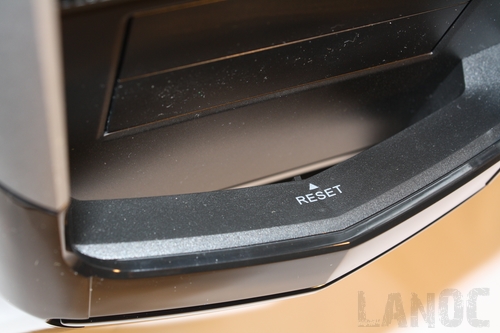 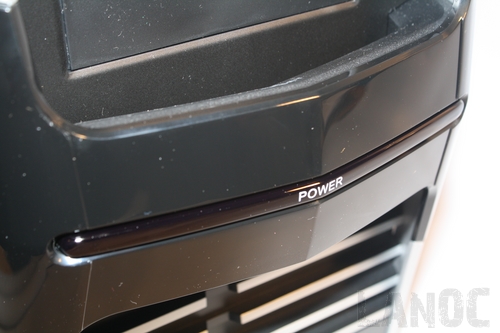 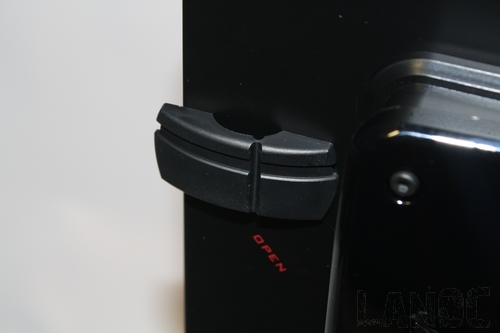 Opening up to look at the inside it was obvious from the start that the X-Fighter does share a chassis with previous In Win cases, the dual fans covering the video card area are a dead giveaway. The silver interior stands out from some of the black interior cases we have seen recently. The bright great plastic used for the fans and all of the screw less accessories stands out considerably drawing your attention to some of the most important features. I've always been a big fan of In Win's screw less designs, the PCI slots are locked in place with easy to use clips. Hard drives and disc drives are secured with vibration resistant tabs that keep the vibration down as much as possible. I also love how all of the extra tabs are stored in a tray inside of the case. 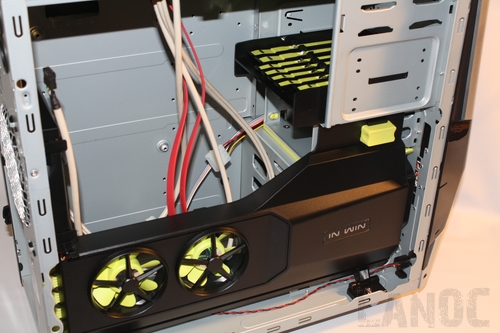 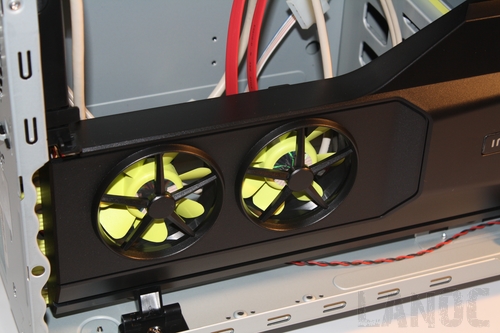 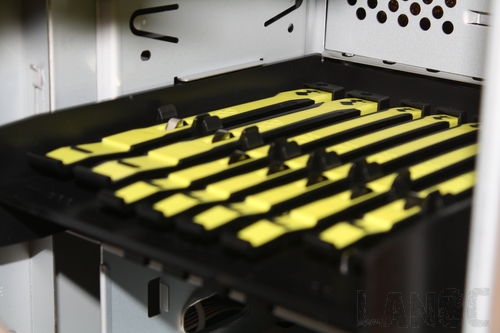 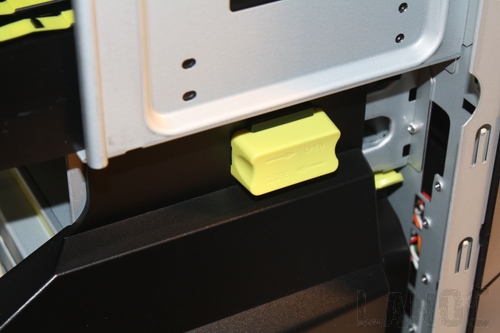 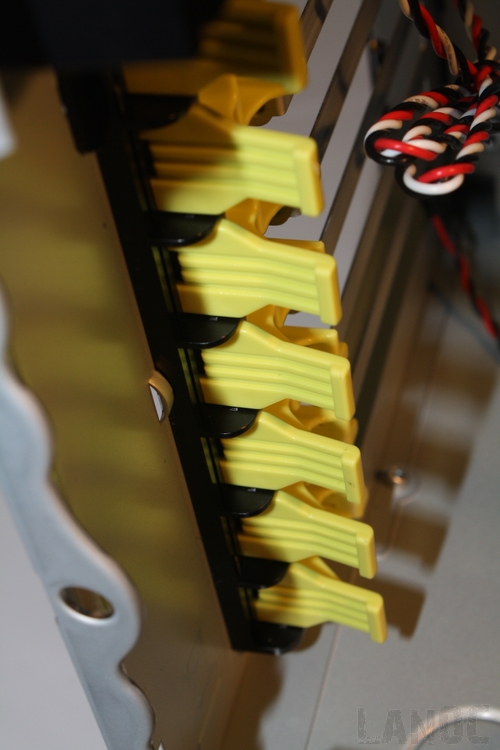 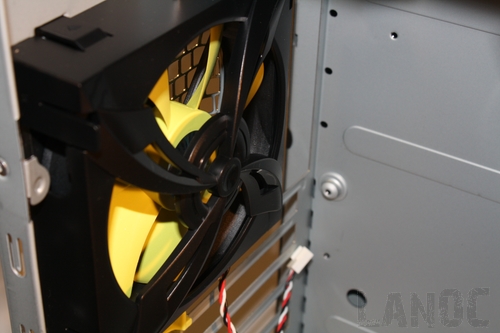 Installing our test setup into the X-fighter was uneventful. The screwless design helped the install go quickly and smoothly. Some of the other manufactures should take a few notes from In Win's toolless design. 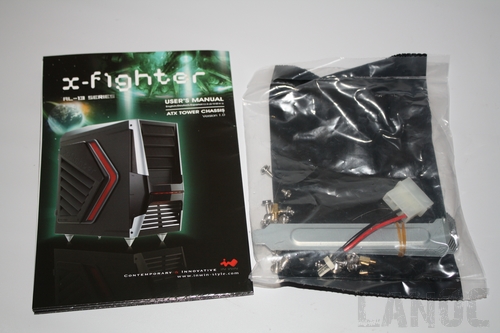 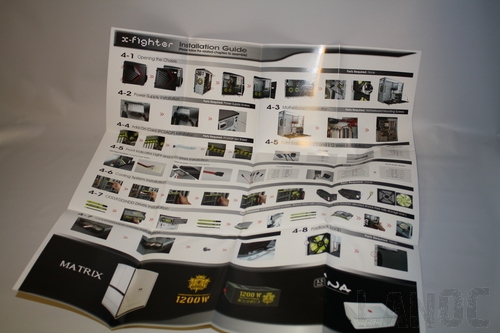 With 4 fans the X-fighter does a competent job of keeping everything cool. I would like to see In Win use bigger fans to give even better airflow without having to run the fans at higher speeds. Because of the smaller higher RPM fans the X-fighter did have a noticeable noise level. Not enough to cause any major problems, but considering the air flow is only average It would be nice for the case to atleast be near silent. 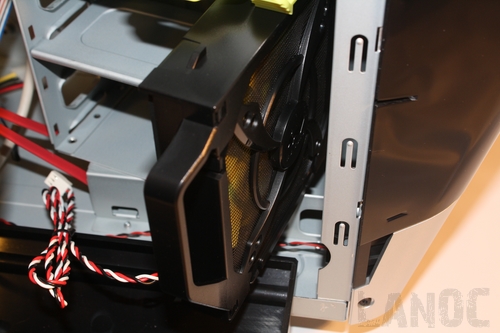 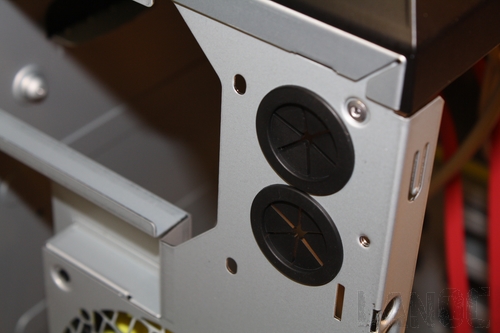 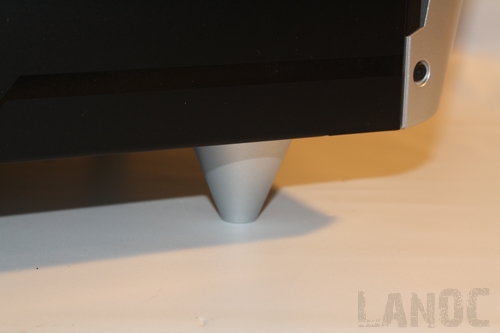 The noise output and airflow performance can only be considered average. The X-fighter really shines when taking advantage of its toolless design. The "Star Wars" spacecraft themed design is very creative and a step above some of the In Win cases we have seen in the past. It's great to see them step out of the box with their themed cases. As long as you keep in mind that you won't be getting the highest performing case you should walk away happy with the X-fighter. I personally would like to see In Win include acrylic windows in their cases but from what I've head this isn't on the plate. If having a rig similar to what everyone else is running isn't your thing, you should take a look at the X-fighter, for those who are looking for a more mainstream case keep an eye out for the unnamed case that In Win showed off at CES this past January. 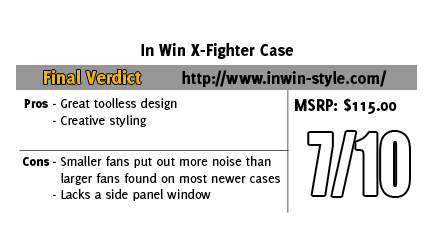 You might call him obsessed or just a hardcore geek. Wes's obsession with gaming hardware and gadgets isn't anything new, he could be found taking things apart even as a child. When not poking around in PC's he can be found playing League of Legends, Awesomenauts, or Civilization 5 or watching a wide variety of TV shows and Movies. A car guy at heart, the same things that draw him into tweaking cars apply when building good looking fast computers. If you are interested in writing for Wes here at LanOC you can reach out to him directly using our contact form.
Discuss this article
Log in to comment
Posts in discussion: In Win X-Fighter

We have 602 guests and one member online