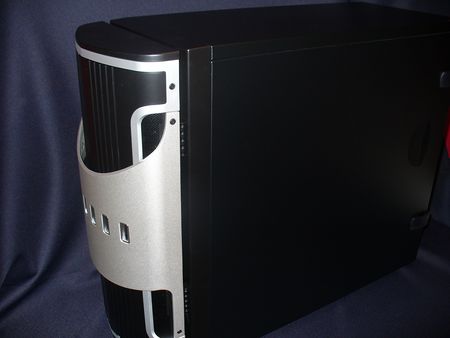 What you choose to put your computer in says a lot about you. People use their case as a way to express themselves, or even just as a way to show off. Once you pick something that you like the looks of your not out of the water yet. You have to keep in mind the size of your motherboard, how many drives you need, and most importantly how good does the case cool the components. In Win has provided us one of their new gamer focused cases the Metal Suit GD to take a look at. We will find out how well it looks, performs, and holds up to the life of a gamer. Click to read more about the In Win Metal Suit GD.

The first thing that stands out to me when I pulled the case out of its packaging is its front door. I’m not a fan of doors on my pc, I feel they get in the way in everyday use. I’m willing to get over that, but the door is HUGE. It does have 6 LED lights installed along the front to show off a little. Moving past the door on around the case I notice the side panel has a nice air vent on it. I hope that this is the first of many features they have included to keep everything cool. They have put a small cluster of plugs on the left side of the case. Included on that panel are 4 USB 2.0’s ports one Firewire port, A mic jack, and a headphone jack. It’s good to see more than just a normal two USB plugs near the front of the case. It’s too bad that because of the front door these had to be put on the side. This can cause a problem for people who keep their case in their desk or near a wall. The door panels both have two clips to hold them on, no more trying to get the thumbscrews started. Moving on to the back of the case, I’m starting to think they mean business with the two ports for water cooling, and the 120mm fan. 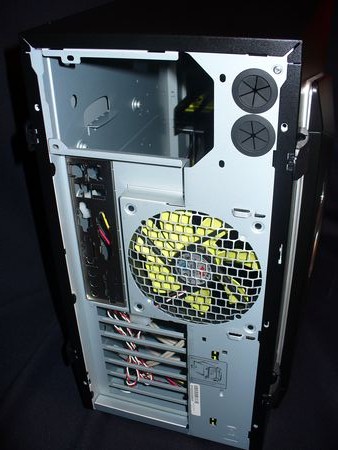 The first thing you will notice when you open the door is the panel with two green 80mm fans installed in it. With a switch and a clip holding it up on the case it shouldn’t be too much trouble to move when working in the case. The motherboard tray is ready for almost any style of motherboard. The motherboard tray does not come out though. Although it’s not standard on every case, It would be nice to see. Making wiring your case easier too do, and upgrades faster in the future. 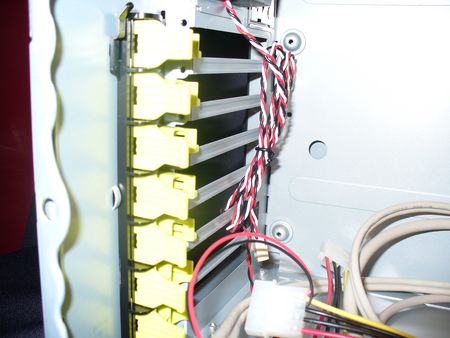 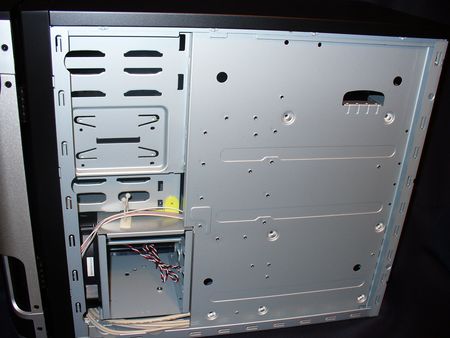 While checking out the three open 5 ¼ slots you will notice the tray filled with bright green clips for installing your drives. It’s a great feature to have them in your case at all times. No one wants to dig through their closest trying to find clips to install that new hard drive. Speaking of these clips, they use no screws making the entire case screw less. They are also made mostly of rubber, this should keep your hard drives and disc drives quieter. Considering they are marketing this case towards gamers with 10k RPM hard drives I think this is a key feature. 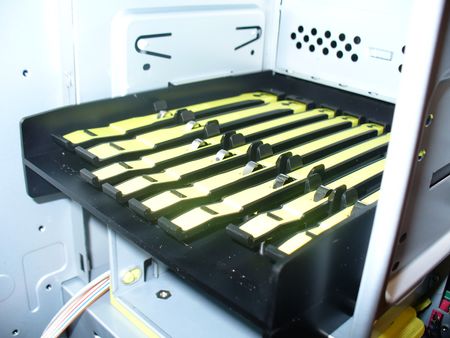 You will also notice the hard drive rack that holds 4 hard drives directly behind one 120mm fan to keep things cool. They have included a clip that if you pull on will tilt the whole drive cage to an angle to give easier access to the drives and to the fan. The fan itself is only held in with a clip, making the filter easy to clean. They have also included two 3 ½ inch slots to mount a floppy drive in if you still need one. 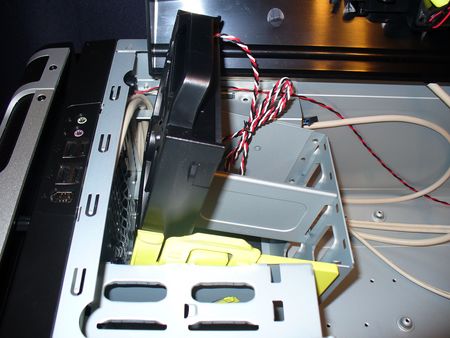 The only thing left is the vent on the inside of the left door. It is what they call the Smart-3D UniDuct. It turns out that vent on the side panel wasn’t just for show. They have included an adjustable tube to direct cool fresh air right over your CPU. It’s nice to see they included the option to move it around to make sure it’s close to your CPU. They also included a mesh filter on the side panel to keep all of that dust out of your expensive PC components. 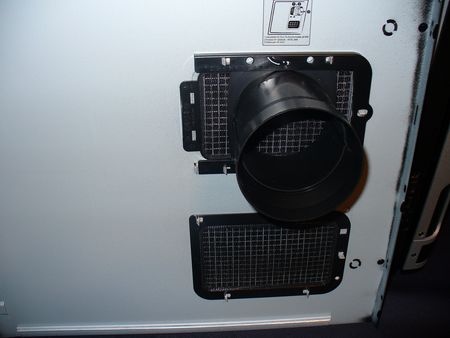 With everything ready to be installed, I didn’t waste any time jumping in. For being a mid tower this case has a lot of room. Even though the longest video cards should fit, it will be close. The hard drive and Dvd rom installed Easily with the included tool free clips. I should add that they don’t feel loose or like they will rattle. In fact I didn’t have any big problems during the install. The dual fans on the side make it difficult to run the wires cleanly. This won’t be an issue in the end because of the lack of window in the case. When installing all of the expansion slot covers using the easy to use screw less clips, I noticed that I only had 6 covers for the 7 empty slots. Because I intend on using this PC as a game server this problem will be fixed once I install an extra eSATA port in one of the expansion slots. My first real issue didn’t come up until I went to finish up and install the side panel. That is when I realized that my Arctic Cooling Freezer 64 Pro didn’t fit well with the vent on the side door. I ended up having to remove the tube to keep the heatsink installed. I think that this will be an issue with all of the bigger aftermarket heatsinks.

Living with the case

After a few days of living with the case I’m surprised frankly. I was a little skeptical when I received the case. With the amount of fans, namely the notoriously loud 80mm fans I expected the case to be something you wouldn’t want to keep on a night if you wanted to get any sleep. Surprisingly the case makes almost no noise. I tried to get a reading with the LanOC decibel meter, but I couldn’t find a room that was quiet enough to show a difference in sound when the case was turned on. This is even more impressive when keeping in mind that this is with everything in the room turned off.

Everything seems to be of good quality, nothing feels like its going to break as I use it. The figment is also good. Everything slides together. You can tell In Win didn't skimp on anything! 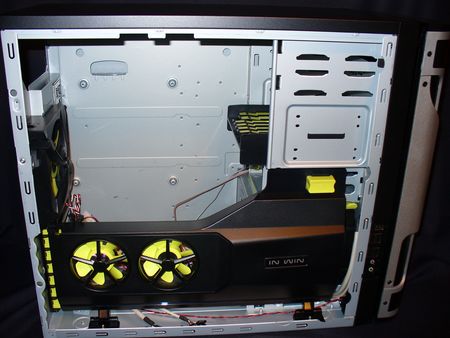 At the end of the day, In Win’s Metal Suit GD has proven itself a great performer. The toolless design is well thought out along with the shock free railing system. Selling for over $130 its disappointing to not see a window in the case, this also goes for the lack of a motherboard tray. Considering that the case is designed solely for the enthusiast crowd the motherboard tray would make wiring much easier and cleaner. The style of the case wasn’t bad overall, but the useless and ugly front door kills the look for me. Because of that I’m going to give the case a 3/5. With that in mind, if the door is your style it’s a proven performer and I would suggest giving it a closer look.

- Side panel vent doesn’t fit with most aftermarket coolers

- No side window (only a con to some people)

You might call him obsessed or just a hardcore geek. Wes's obsession with gaming hardware and gadgets isn't anything new, he could be found taking things apart even as a child. When not poking around in PC's he can be found playing League of Legends, Awesomenauts, or Civilization 5 or watching a wide variety of TV shows and Movies. A car guy at heart, the same things that draw him into tweaking cars apply when building good looking fast computers. If you are interested in writing for Wes here at LanOC you can reach out to him directly using our contact form.
Discuss this article
Log in to comment
Posts in discussion: In Win Metal Suit GD