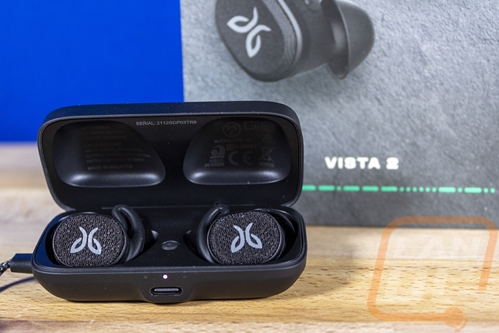 Just like the original Jaybird Vista’s the new Vista 2’s come with their own carry/charging case. The design for the case is similar to the original, but not completely the same. It is black on the outside and has the Jaybird logo on top but the shape is a little more rounded this time around. On the front the single LED of the original is now gone with three extremely small LEDs in place of it, you can hardly see them even in the picture below but they are above the charging port. These will let you know the charge level beyond using colors like before. The charging port is type-c again which I love. This keeps it matched up to a majority of cell phones for easy charging. The case also now has wireless Qi charging as well built-in which with most of the high-end phones including Qi charging gives a second easy charging option. The case has a rope on one side that you can use to attach the case to a lanyard or something else to keep from losing it. 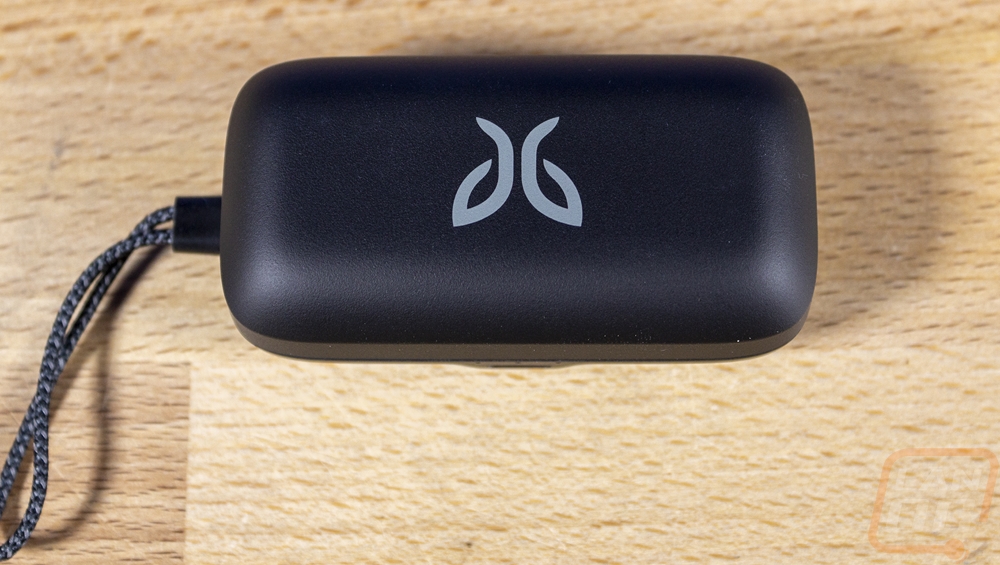 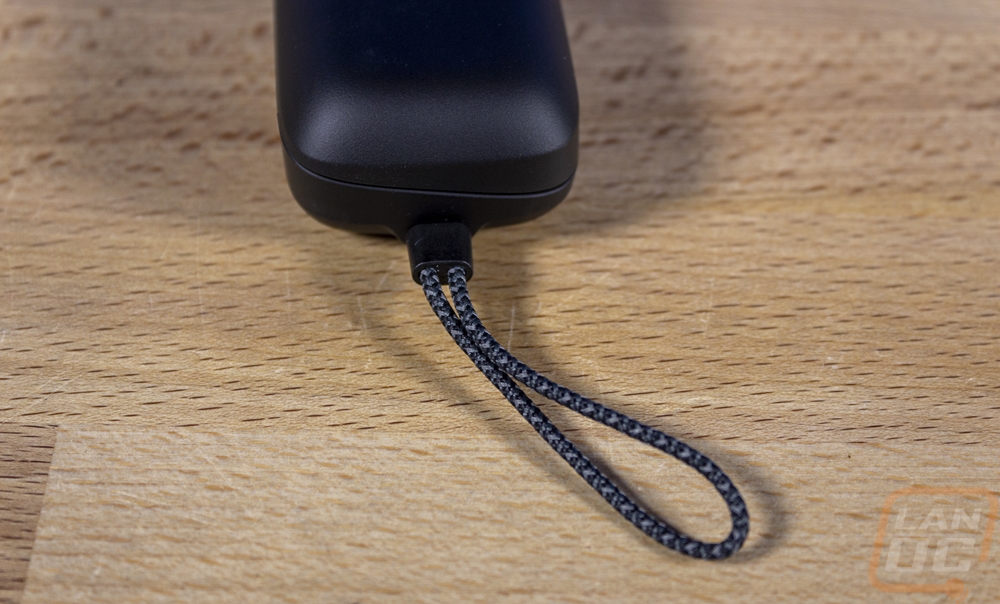 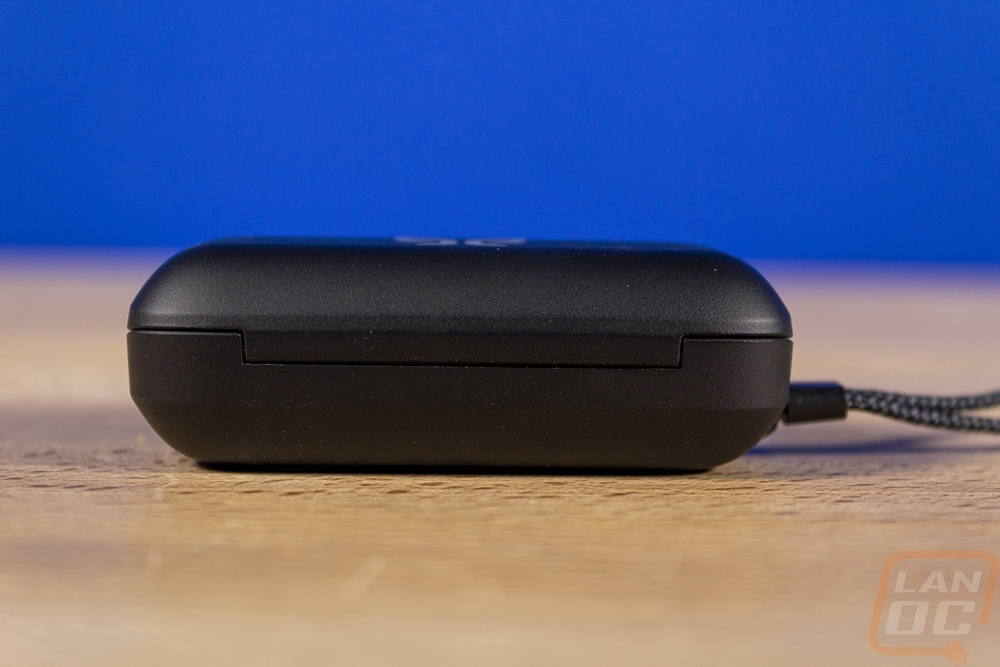 All together the carry/charging case is 74.6 mm wide 25 mm deep, and 38.5 mm tall. It is small enough to fit in even small pockets which makes it easy to bring with you if you want to use the Vista 2’s later in the day or so you can use them when walking/biking to work and home. 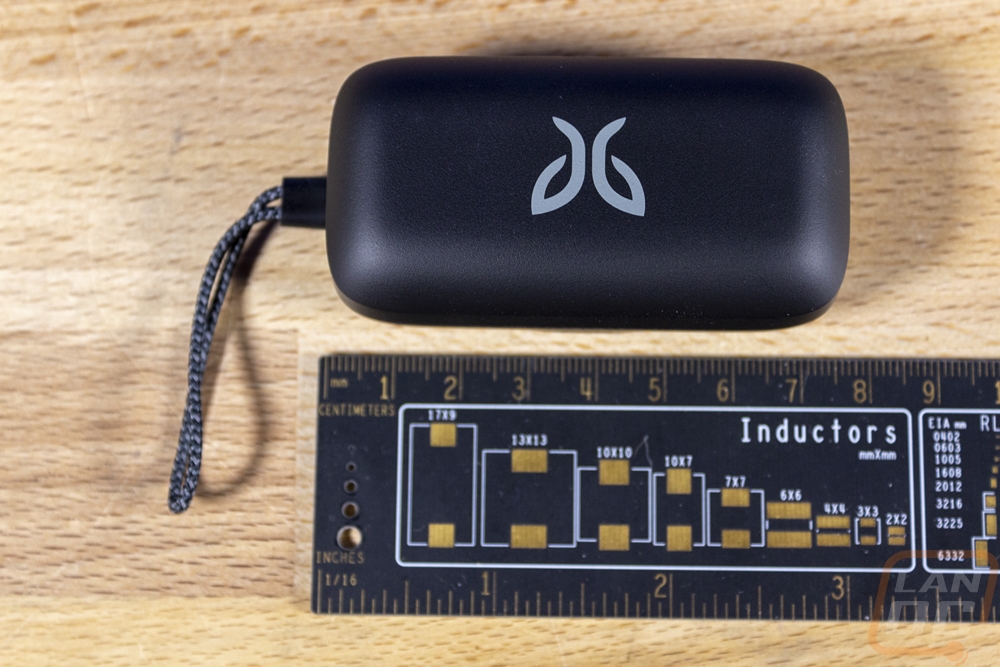 The carrying case also doubles as the charging case as well. That is why it has the three status LEDs on the front which will light up to show you the overall charge when you open the front. But the new case design doesn’t have the small area to get a nail in to help open up the magnetically latched case. Inside the two headphones, each has its own spot. This isn’t any different from the originals other than the interior is now black not the bright green used before. In the center between the, is a single button. This is for syncing Bluetooth or removing sync to attach to another device. When you pull the Vista 2’s out you can see how they charge as well with two contact pads on each side that line up with pads on the headphones for charging. Then like I mentioned before the case itself charges using the USB Type-C on the front or with wireless Qi charging. The case also has its own batteries, this allows the Vista 2’s to get charged back up even when you have them stored in your pocket. The case can get two full charges which total 16 hours in playtime. This combined with the charge that the Vista 2’s have gives you 24 hours in total playtime. Then as far as charging goes they can recharge in 2 hours and there is a quick charge mode that gets you an hour's worth of charge in five minutes when you just need a little charge for a run or your trip home. 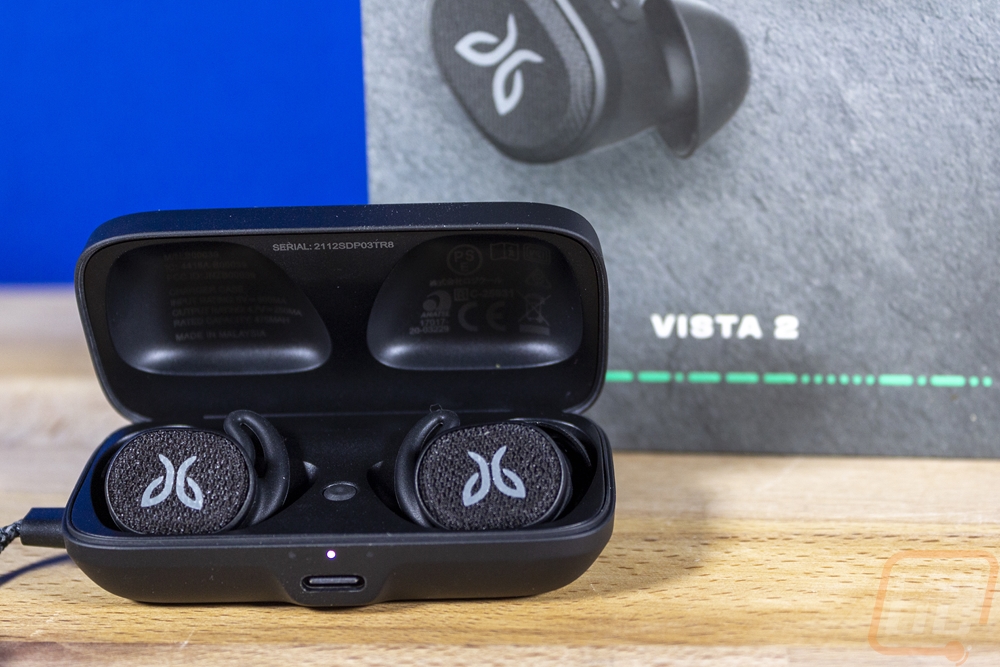 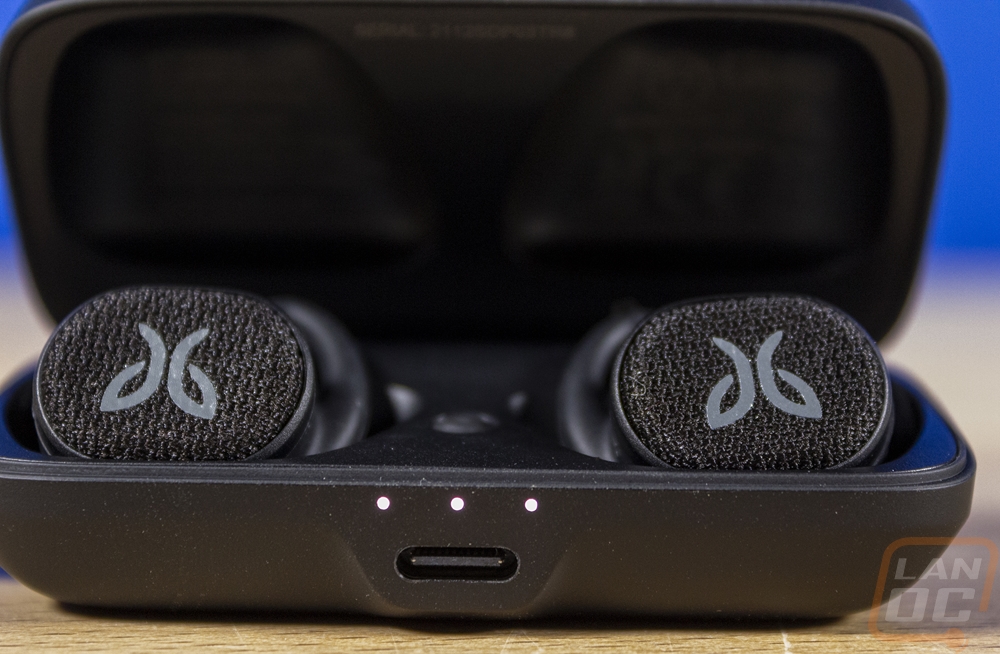 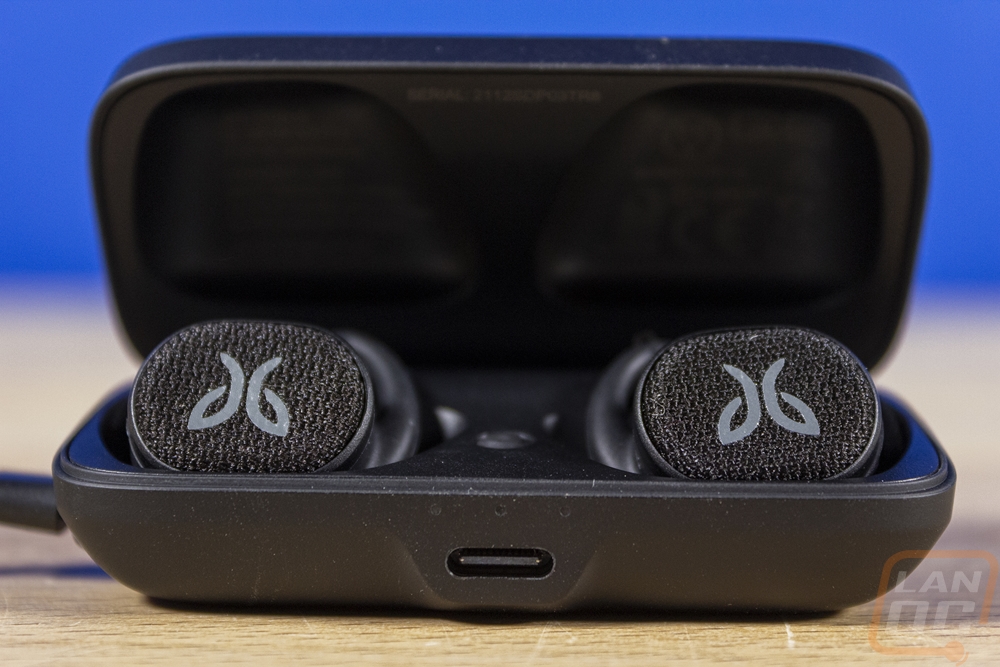 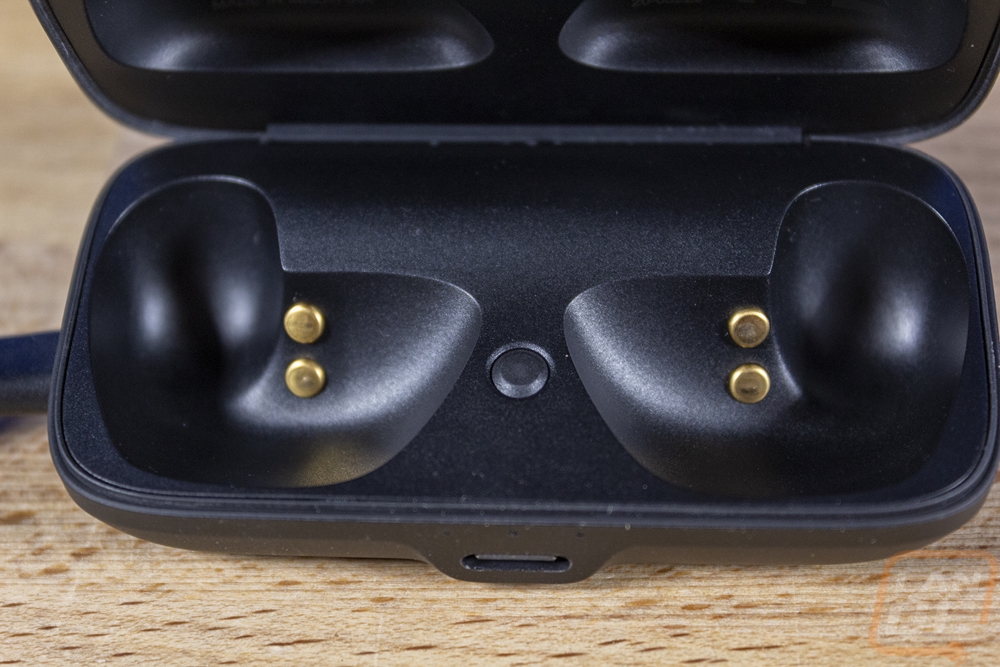 So the initial shape of the Vista 2’s is similar to the original design. They did change things up with the fabric on the outside which makes sense because the Vista 2’s are adding active noise canceling and those microphones are behind the fabric. You can see the oval shape of the main housing which is unchanged from the original Vista and the winglets on the eargels to help hold things in place. They hook into the top of your ear to give a second point of contact which given Jaybirds focus on audio for being active, is a good addition. You also have the multiple eargel options as well that all come with the Vista 2’s including options without the wing as well. The default eargel is the size 2 which you can see labeled when you look at the underside. That video also shows the two contact pads as well and the magnet they use to keep that contact surface tight together in the case. The top of the eargels has the L and R so you know which side is which, but with the design, they don’t fit in the wrong ear so you will figure it out even if you ignore that and that they sit in the case on their respective sides.

Now unlike a lot of in-ear headphone designs, the Vista 2’s eargel design covers almost the entire headphone. But they are a larger design and most of this is going in your ear, so it does make sense and helps keep things cleanable and more comfortable. This view also gives us a better look at the

I of course can’t look at the Vista 2’s without putting them next to the Jaybird Vista’s that I’ve been using for the past year. The differences in the charging/carrying case are a lot more noticeable when you have the two next to each other. The new design is all rounded and most likely easier to drop into your pockets. But I can say that the older design was easier to open due to the small lip it has on the front edge for better grip. The new housing feels like its magnet is a little weaker to help compensate for that. I also miss the bright interior color, even though it is purely cosmetic.

As for the headphones themselves. The main changes that are visible from the design would be of course the fabric outside design and the left and right labels now stick out and have small nubs on them to make them easier to feel. The driver inside at least going off the spec sheet hasn’t changed. It’s the same 6mm size and the range is still the same at 20Hz - 20kHz. Impedance and sensitivity are the same as well. The same goes for the built-in microphone which has the space specs as well across both products. The main performance changes are with the battery life which is now 8 + 16 vs 6 + 10 of the original and the addition of active noise canceling as well as surroundsense which is important when running or riding to keep you safe. 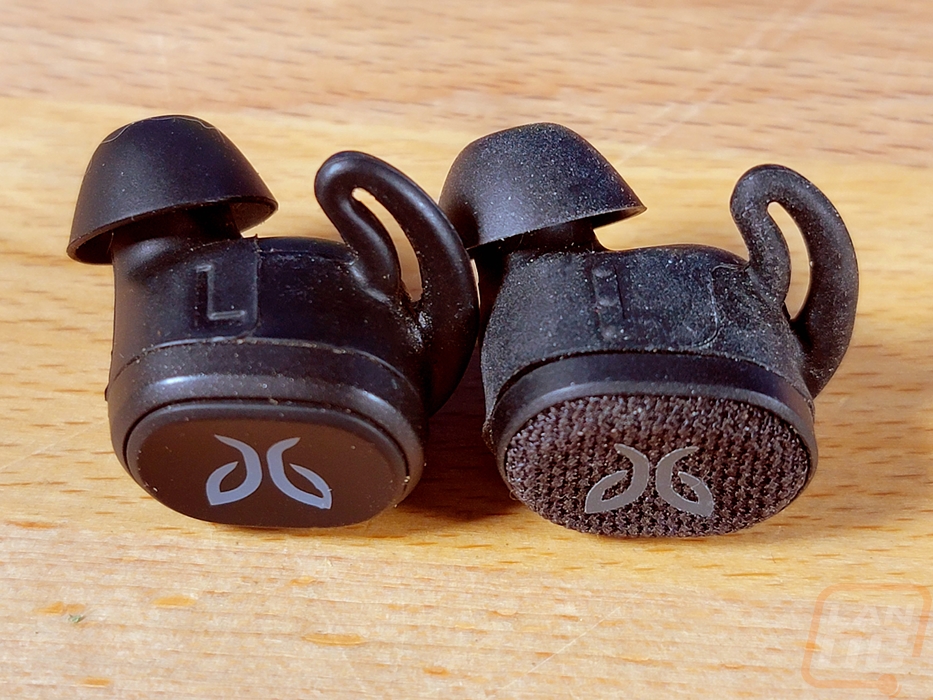 We have 1151 guests and no members online