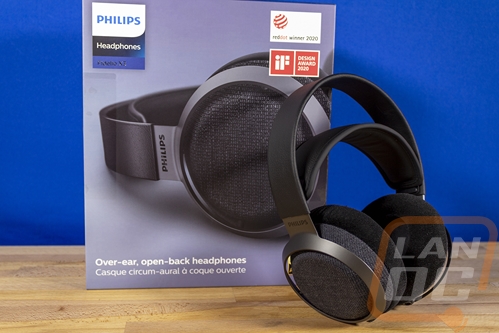 Well going into this, I already knew that the Philips Fidelio X3 fit exactly what I like as far as the main features go. But often, those are the situations where I end up disappointed, probably because when something has all of the features I would want my expectations are very high. Well the Fidelio X3’s ended up beating most of my expectation but there were a few areas where they could improve as well.

So I love that this is an open-air design, that ended up playing a big role in the comfort for me because for once my ears never get hot. Combine that with the comfortable suspension headband, velour on the earcups, and thick memory foam padding that fit around and not on my ears. I love how comfortable the X3’s are. Being lightweight helps with that as well when it comes to more extended sessions. The open-air design also plays a big role in the audio performance for me. Because I can still hear anything around me, listening to music, especially live music is more captivating. It was also great when doing zoom meetings and in Discord because the person on the other end feels like they are in the room. Audio performance as a whole was amazing, I did spend a few hours after I first hooked the headphones up to just flip through old songs to hear them again in a new way. The other big feature, and it won’t matter to everyone. But I think the X3’s look great, especially compared to a lot of other audiophile headphones. They remind me a lot of a mid century modern furniture with the floating earcups and the outside fabric that looks like an old tweed.

Now I started, not impressed with the packaging that Philips went with. For their flagship headphones, I was expecting a little more on the outside design to set it apart from everything else they make. At least for anything in their Fidelio line. They could have also done better with the included bag that it ships in. Given the high-end Muirhead leather that they included documentation on where it came from and the Kvadrat fabric, you would think they would want you to baby things later by packing it up in a protective bag. But the bag you get is only good for keeping scratches off it during shipping. The other issue that I noticed was that the X3 has the same warranty as the rest of Philips’ headphones and headsets. You would think their Fidelio line would have a little better warranty. Or that the product lineup across the board would match warranties that other companies have like Sennheiser and Audio Technica which both offer a 2-year warranty on all headphones. The X3’s have one year.

Really though, those are all relatively small issues. The only physical issue I had with the headphones was with the suspension headband. It doesn’t slide very smoothly which means it catches sometimes and was noisy through the headphones when they do move. Which happens anytime you move around. It’s not the first suspension headband that I’ve had that issue on, but I was hoping for a little more given the price.

Which brings me to the last and most important part. How much do they cost? Well, they have an MSRP of $349 which if you are a big fan of the Fidelio X2’s might be a surprise. The X2’s can be found for around $160. But I do also think that you are getting about what you should expect for that amount of money. They do perform extremely well and have a unique design. Gamers can see these as a potential upgrade, but as a big proponent of the ModMic, I don’t think the X3’s will support one with the fabric covering most of the outside. I did my testing with a desktop microphone. 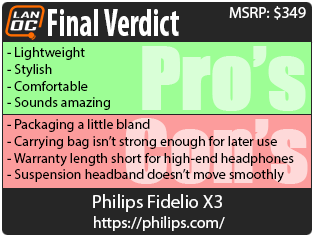 You might call him obsessed or just a hardcore geek. Wes's obsession with gaming hardware and gadgets isn't anything new, he could be found taking things apart even as a child. When not poking around in PC's he can be found playing League of Legends, Awesomenauts, or Civilization 5 or watching a wide variety of TV shows and Movies. A car guy at heart, the same things that draw him into tweaking cars apply when building good looking fast computers. If you are interested in writing for Wes here at LanOC you can reach out to him directly using our contact form.
Discuss this article
Log in to comment
Posts in discussion: Philips Fidelio X3

We have 605 guests and one member online