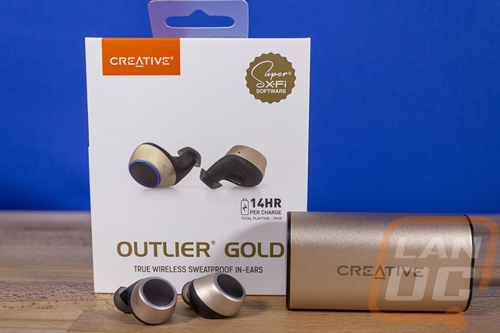 So the Outlier Gold comes in a small white box with a slide-off top. The front has a good picture showing both of the earbuds and their gold finish. Sticking with the gold finish Creative has the model name in gold as well as the Super XFi software logo. The line under the model name “True Wireless Sweatproof In-Ears also does a good job of explaining what you are getting. The 14 hour per charge that is also on the front covers the other big feature. Around on the back Creative bundles up all of the features with icons, then below that they have pictures of everything that comes in the packaging. 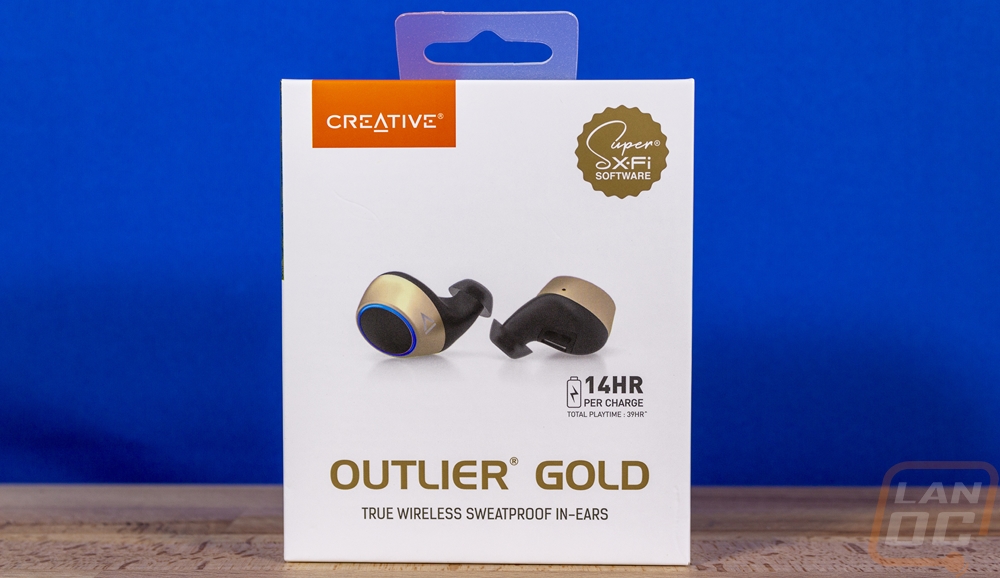 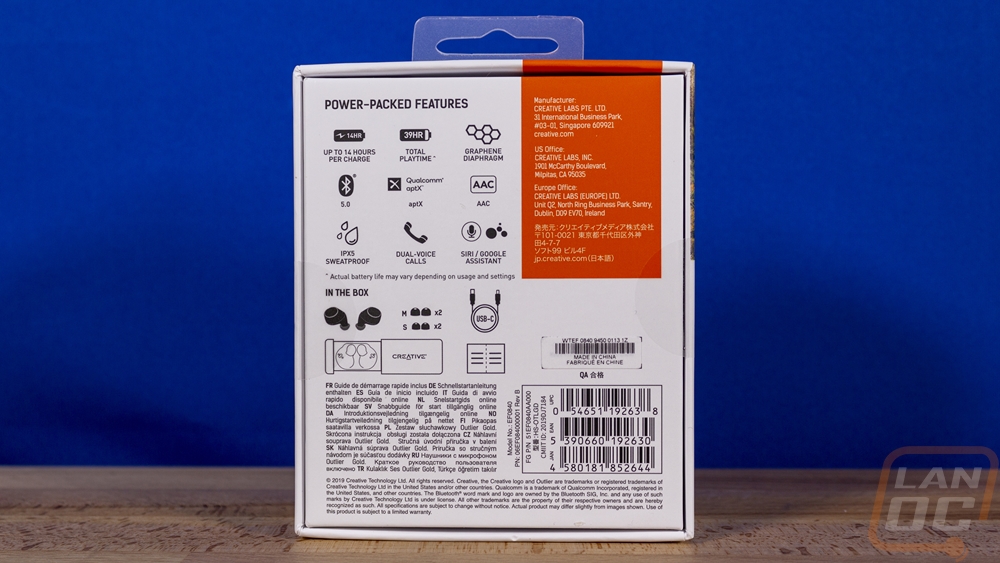 When you pull the lid off the box, it does have a plastic shield that sits over everything. Then under that, a plastic tray formed to fit the Outlier Gold earbuds and a carrying/charging case. There was also a small instruction book as well that explains how to download the Super X-Fi software that was sitting on top of everything with it read me first in bold. 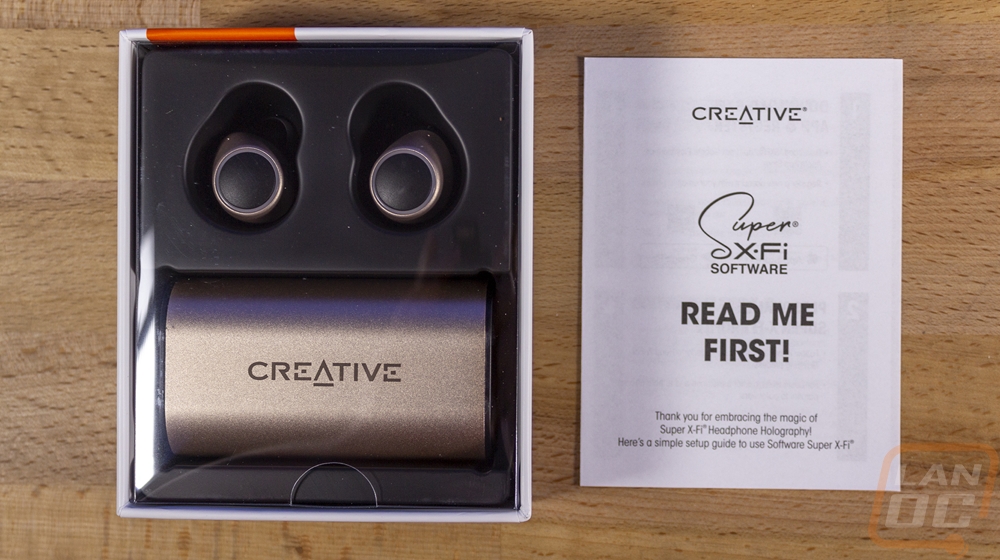 Once you get everything out you do end up with a stack of paperwork including a warranty book, safety, and regulatory book, and a user manual. In addition to the earbuds and the case, you also get a semi-short USB charging cable and a whole bunch of replacement ear tips. You get two pairs of small and two pair of the medium. Then the lonely single pair is a large pair that goes with the set that comes installed on the earbuds. 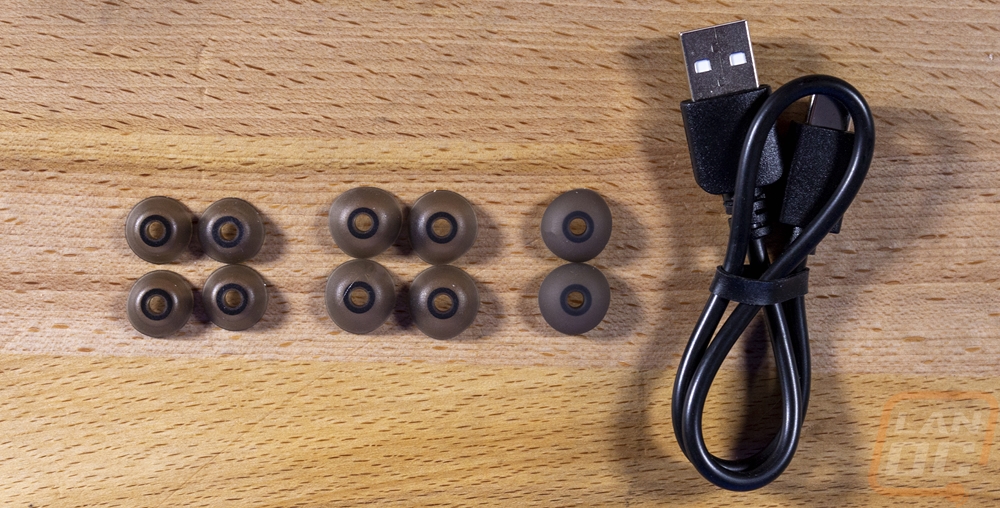 Like any other wireless earbud, the Outlier Golds do come with a case as well. This is to make sure you don’t lose them of course and so you can charge them up as well. The Outlier Gold’s case is also decked out in the gold finish as well though I would really call it more of a rose gold. The gold portion is an oval-shaped all-aluminum tube and it has the Creative logo on top. 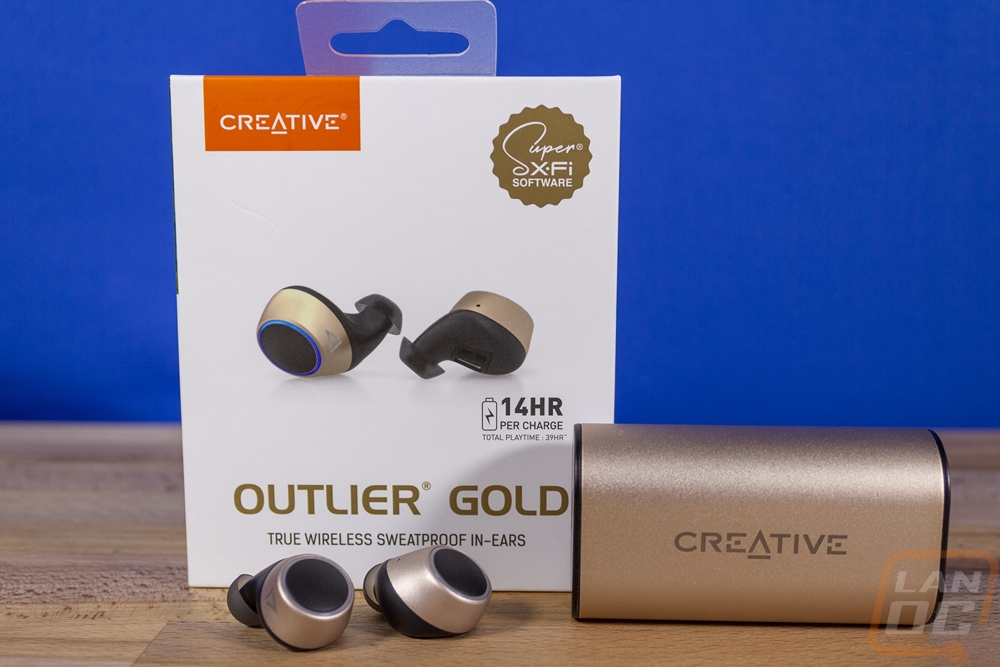 Both ends of the case are black plastic and the left end has a few things going on. For starters, you have the USB charging port which is Type-C which is awesome. Then above that, there are four pinhole LEDs to give you a status update on a few things. The far left and right LEDs let you know that the left and right earbuds are in place. Then the second turns on when you open the case and it powers up the earbuds. Then the third shows when you are charging. All four light up blue which is interesting, I thought the power would be red for example. On the other end, the case has the Super SX-Fi software branding, that is where you push to open up the case as well. Then when you slide everything out you have two earbud shaped holes that have pins for charging the earbuds and magnets inside to hold the earbuds down in place. The case does have a small amount of battery capacity built in to give the Outliers a boost when away from a charger. 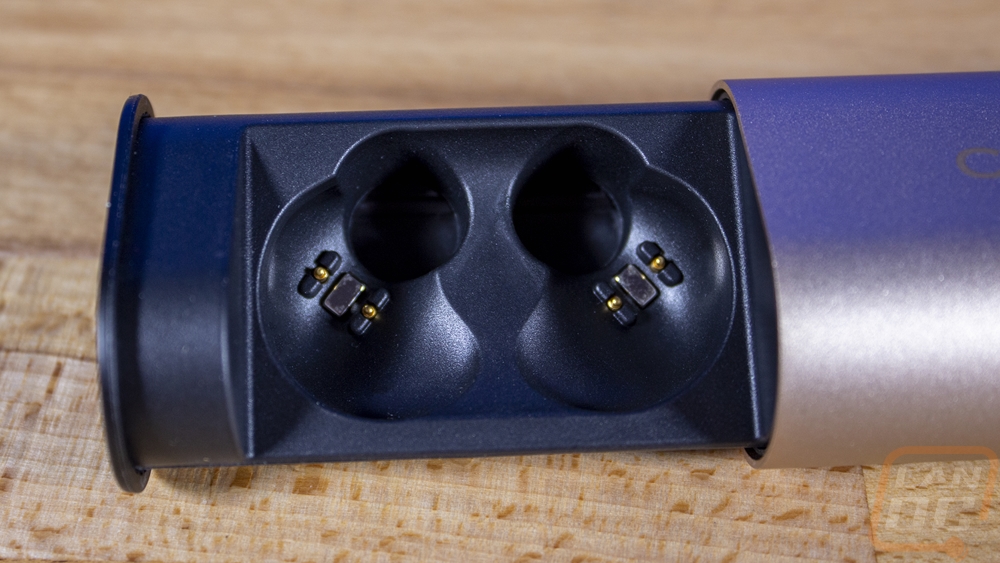 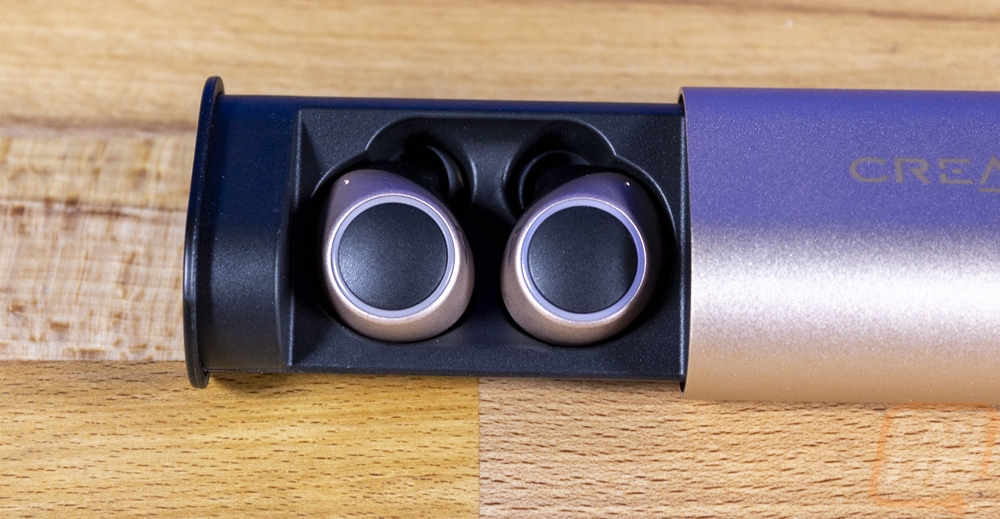 Here is a look at the Outlier Gold’s on the outside where there is a ring LED status indicator and a large button in the middle. Beyond those two things, the rest of the outside of the earbuds have that same rose gold finish as we saw on the case and as the product name indicates.

If you are only used to wired earbuds, these will seem a little bulky and they are slightly larger than the other in-ear wireless’s that I’ve taken a look at. But they also have the highest battery capacity as well with 14 hours of charge for each earbud listed. The website pushes that you can use them one at a time for a total of 39 hours including the charge that the case has built-in. Which tells us that if you are using them together like most people will you get 14 hours on the earbuds and 5 and a half hours from the charge in the case as a backup. Most importantly though, even without using the cases charge, 14 hours is a LOT of time and more than enough to use them for a full day of work, your workout, and if you take the subway or a bus you could use them for your trip to and from work as well and still have time left over. You can see that the shape gets small where they go inside your ear and they have silicon caps like most earbuds to help fit tightly. Those are replaceable with the two other sizes included along with replacements as well that all come with the Outlier Golds. There is a pinhole microphone on each earbud as well when can be seen from this point of view.

The bottom is where they both have their magnet and dual charging pads for the included case. Left and Right is also marked here as well to prevent any confusion. They do mount in the charging case with the left on the left and the right on the right, so once you get used to it you shouldn’t need to look for these.

We have 1054 guests and no members online