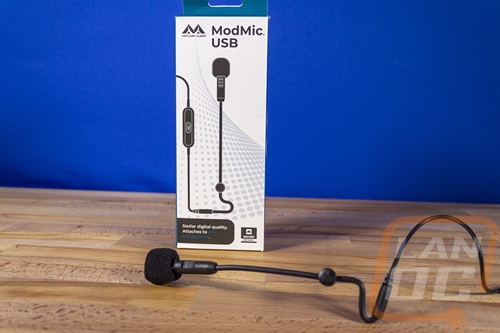 With testing done and having taken a closer look at the Antlion Audio ModMic USB we can finally sit down get a better idea of the pros and cons. First off, I love that they brought out a USB model. With a lot of DACs, you don’t actually get a microphone input which leaves you plugging the ModMic into your onboard audio or using a USB adapter and Antlion Audio does offer one. But I like that the ModMic USB gets right to it. Putting the ADC inline also helped improve the microphone mute, which used to be a manual switch that just plugged in inline between two cords. The push-button mute is easier, smaller, and you don’t have to worry about it coming unplugged. Not to mention you now get a light to let you know when you are muted. Performance-wise, there weren’t any big surprised here, ModMic sounds great, water is also wet lol. They did change a few things in the microphone from the ModMic 5 which is the last wired version I took a look at, that help with the high end on the omni-direction mic and with the signal to noise ratio on the uni-directional microphone.

Like with previous ModMic’s, I still like that it is a removable option. A lot of people may listen to music all day but only need to use their microphone sometimes. You can take it off if you want or flip it up 90 degrees. Which that does lead me to one of the complaints I’ve always had, I do wish the mounting had more options. You can only turn the microphone in 90-degree increments, from there you are left to adjust by bending the boom which works but a little finer adjustment would be nice.

With the ModMic 5, I did mention that the price was starting to get up there and the MSRP of the ModMic USB is $10 more with an MSRP of $79.99. The higher price is completely justified considering you do get the USB ADC built-in, but the price does still start to take away from the value that a ModMic used to offer when you paired it with a good value pair of headphones. Antlion Audio did consider this though and they do have the new ModMic Uni that cuts out one of the microphones and the USB ADC to stick with the classic ModMic 4 design and the lower $49.99 MSRP. With that and considering the ModMic Wireless there are different price and feature options now and I dig it. When money isn’t an issue the ModMic Wireless is still my go-to, but when I inevitably forget to charge it the ModMic USB is right there. 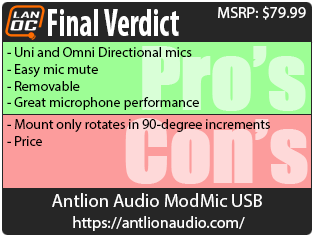 You might call him obsessed or just a hardcore geek. Wes's obsession with gaming hardware and gadgets isn't anything new, he could be found taking things apart even as a child. When not poking around in PC's he can be found playing League of Legends, Awesomenauts, or Civilization 5 or watching a wide variety of TV shows and Movies. A car guy at heart, the same things that draw him into tweaking cars apply when building good looking fast computers. If you are interested in writing for Wes here at LanOC you can reach out to him directly using our contact form.
Discuss this article
Log in to comment
Posts in discussion: Antlion Audio Mod Mic USB