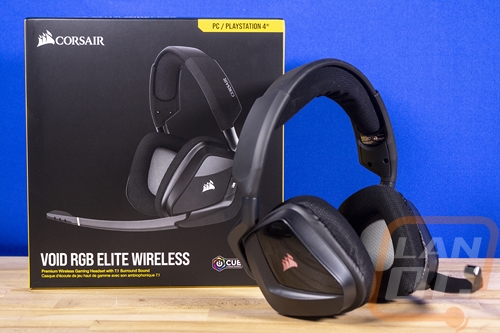 While I have had a few other Corsair headsets in the office. This was actually my first time testing any of the Void headsets. Aesthetically I’m not entirely sold on the overall shape but I do like that the Void RGB Elite Wireless isn’t too in your face with crazy colors, “gamer” styling, or RGB lighting. Corsair kept things simple and being wireless they couldn’t RGB all the things like they tend to do and in the end, this is a nice looking headset. More importantly, the headset is comfortable. The shape wasn’t ideal for me, even being an over the ear design it did end up laying on some of my ears. But the soft microfiber fabric and thick memory foam padding on the earcups and headband made up for things helping with comfort, even in long sessions. My only issue there was heat which I have with just about any sealed earcup design.

As for performance the 50mm drivers sound great and the frequency range ends up beating all of the other wireless gamer headsets in this price range but I will talk more about pricing in a minute. This meant solid audio performance in all of the different ways you will use a headset. I wouldn’t have minded more bass on the lower volumes, but it was there when I turned everything up and you have the option to tweak the EQ to fix this if needed. Speaking of turning things up, the Void Elite Wireless has a higher sensitivity than a lot of the other wireless headsets and because of that it's loud. A lot of wireless headsets end up a little weak when it comes to volume for battery life, but that wasn’t a problem here. Battery life was solid as well. I do however wish the charging cable was Type-C to keep things consistent with today's phone chargers that you most likely already have on your desk. The included wireless dongle was also a little big and will most likely have issues with any other large devices like flash drives if you try to plug them in next to each other. A dongle on a cord that can sit up on your desk like the Arctis 7 would be nice.

I did have an issue with the microphone where it puts out some feedback, I’m not sure if that was a defect or an overall issue. The microphone's performance wasn’t as spectacular as the speakers as well, you get “good enough” microphone audio which is the norm on most wireless headsets. Bandwidth is always limited and it seems stereo always gets the majority. Speaking of the microphone I do like that the microphone auto turns off when you flip it up. The LED indicator on the boom showing it is muted was also helpful. I don’t need to accidentally say something on mic when talking to my wife for example or coughing.

So overall the Void RGB Elite Wireless is solid but with its flaws. That leads me to pricing. With an MSRP of $99.99 this ends up being right in the middle between some of the mid-range headsets and getting into the more premium options. The newer Arctis 7’s, for example, are $119. If given the choice the Arctis would still be my preferred headset simply because of the earcup shape that fits me better. But Corsair is right on point here with an option to help others cut the cord without losing audio quality. You do give up some on microphone performance in comparison to the higher-end wired options though and that is assuming the feedback issue I experienced is a defect, not the norm. Being $20 less than the Arctis 7 this is still a great buy. Funny enough, this also pushes the older Void Pro Wireless headset down to $70 right now (pick one up with this link and help support the site) and that might be an even better option. The improved drivers and padding do make a compelling argument for the upgrade though! 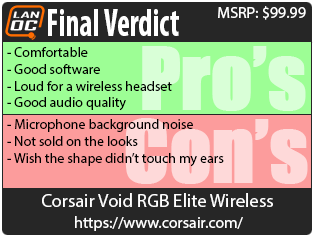 You might call him obsessed or just a hardcore geek. Wes's obsession with gaming hardware and gadgets isn't anything new, he could be found taking things apart even as a child. When not poking around in PC's he can be found playing League of Legends, Awesomenauts, or Civilization 5 or watching a wide variety of TV shows and Movies. A car guy at heart, the same things that draw him into tweaking cars apply when building good looking fast computers. If you are interested in writing for Wes here at LanOC you can reach out to him directly using our contact form.
Discuss this article
Log in to comment
Posts in discussion: Corsair VOID RGB ELITE Wireless