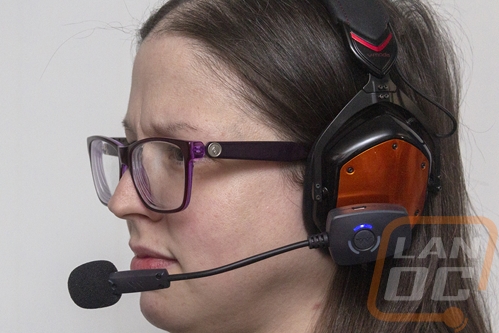 For testing I have been using the ModMic Wireless at my desk off and on for a while now, too long really, I should have been writing this a while ago. Part of my testing I used it with my original Crossfades which is also what I have used my other ModMic’s with. You will notice that I have the mic mounted on the left when they recommend the right side. The only difference and the reason for that is to have the charging port facing down so don’t worry. I also tested the microphone paired up with my SteelSeries Arctis Pro Wireless which I use day to day at my desk. I normally use the Crossfades at LANs because of their size. 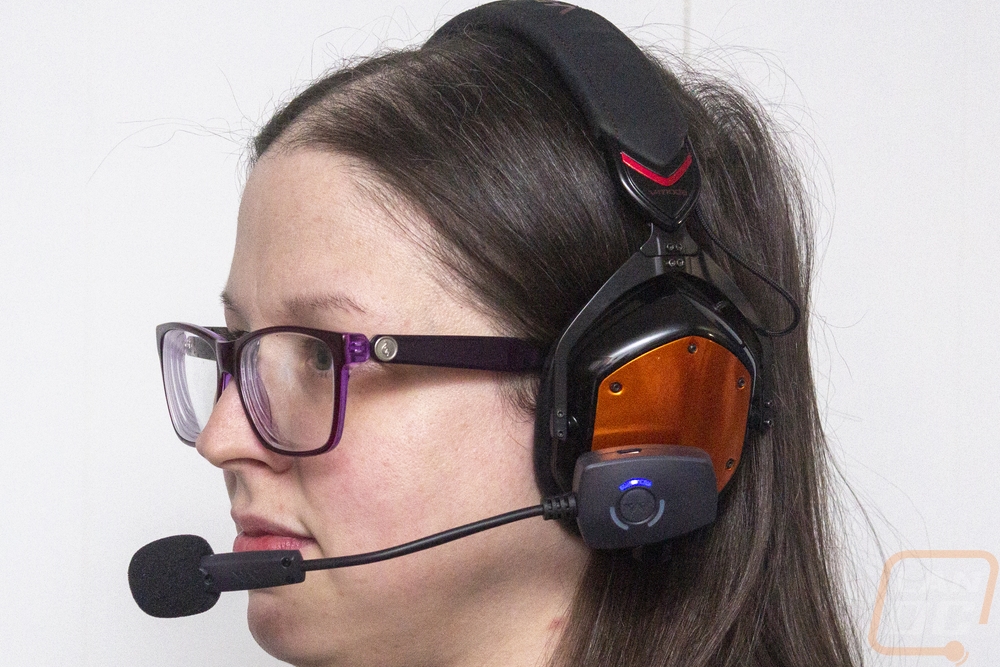 So there were a few things I was able to test during that time. For one I wanted to get a feel for the new stronger magnet attachment setup and as I said before there is no doubt that it is stronger. I used the older mount on my Crossfade and a new clasp on the Arctis Pro Wireless and even just swapping the one half out was night and day. With the older one you could bump it and feel it move but with the new clasp, it is locked in. I also didn’t mind the 5 adjustment points as much as I got a more lined up mounting location on the Arctis this time. But with the Crossfade you can see even in the photos that I had to just adjust it in the boom itself, angling down right away or it would be in your nose. Speaking of the boom it is very flexible but still strong. I did notice that our ModMic Wireless did have a little play at the base of the boom where it goes into the transmitter casing. If you shake it you can hear the movement, it isn’t like a rattle but you can hear it. Of course, I don’t move around THAT much when gaming so it was only noncable to me when artificially moving it around. 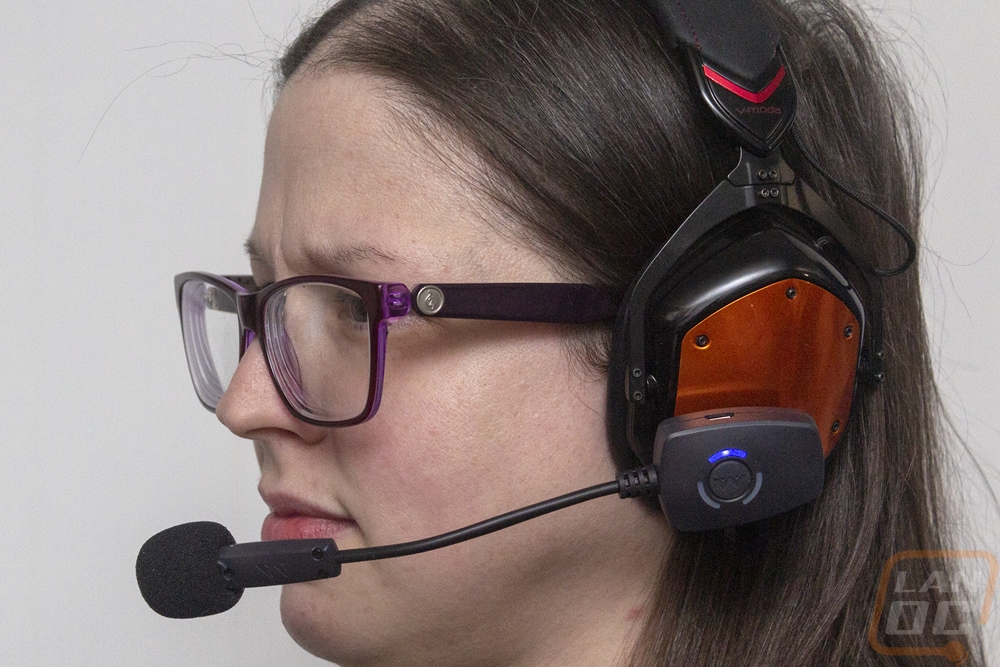 As for the wireless performance I ended up being really impressed with the performance. The 12-hour battery life was about right and more than long enough for me in any situation what I needed a microphone. Of course, a streamer or someone gaming from morning to night might need to plug in for a little charge in the middle of that. You can charge it while you are using it, but you do lose the wireless aspect at that point. The range was great, even in my home which is frequency heavy and typically gets much lower range on any wireless device. I used it at the farthest point in our living room which 22 feet long in addition to having the kitchen between it and my office.

The status indicators worked well for me as well once I got the hang of the red is mic, blue is signal, and yellow is battery aspect. I did run into a regular and frustrating issue though with the single button configuration. I like it for muting and turning on and off, but to turn the ModMic off you hold the button for 3 seconds. Pairing on the other hand you hold it for 5 seconds. That isn’t a huge window and I ended up putting it in pairing mode multiple times and had to stop and repair everything. A second pairing button would fix this or just upping the pairing mode hold time to 10 seconds. But it was by far my biggest complaint with the device. 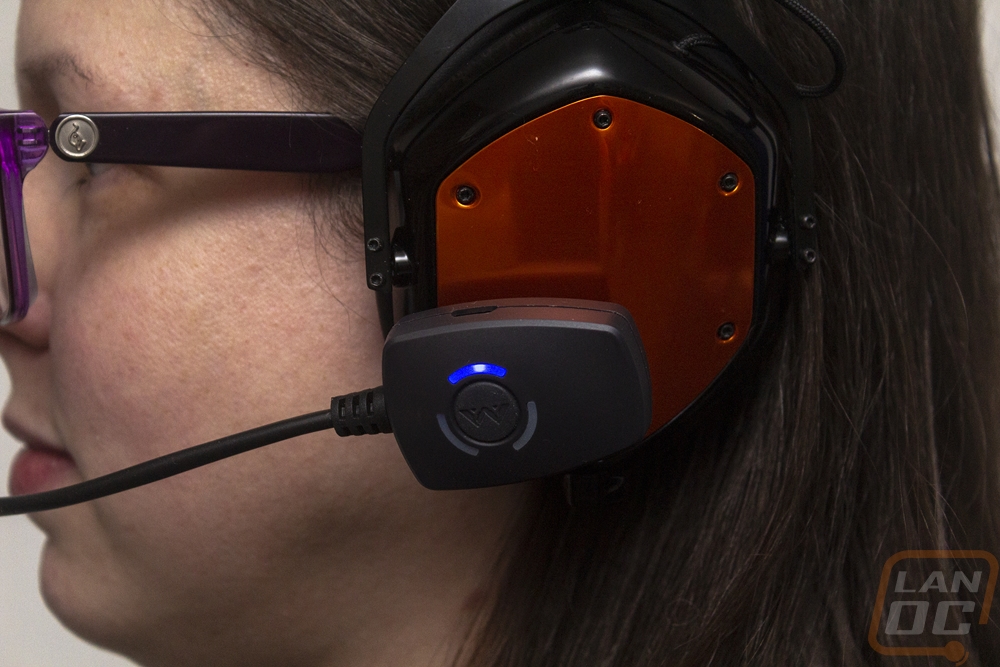 You will notice I have danced all around how the audio performance of the ModMic Wireless. Don’t worry that isn’t an indication of it being bad. But rather than talking about my experience, which by the way was good, I did some comparison testing for anyone who wants to check it out. I put together this video which I recommend playing at the highest resolution for the best audio quality. I tested the ModMic Wireless against the ModMic because I’m sure a lot of you are curious about how they compare. I even tested both of them in both omni and uni-direction modes. I then tested with the Arctis Pro Wireless and the Arctis 7 which are both wireless gaming headsets and in my opinion they both have good performance (this is my go-to and my previous go-to). Then I played around with three different desktop microphone options you might consider if trying to avoid a wired ModMic. Each test has me talking and then testing how they pick up background noise from a loud keyboard (I used the space bar which is the loudest) and a mouse click from a louder Omron switch.

Now it is all there for you to listen too and judge for yourself. My notes though, first off using the Uni-direction setting did have a noticeable drop in background noise from both devices. Audio quality wasn’t noticeably different between them. Now the ModMic 5 in Uni-Directional mode was quieter than the wireless as well as the 5 in omni-directional mode. Comparing the ModMic Wireless to the two SteelSeries microphone there was a clear difference in the quality, it sounded more compressed to me, quieter, and it didn’t have as much range. The Sennheiser Game Zero sounded great and I think that might be the most comparable microphone in performance to the ModMic Wireless, only the Game Zero is wired which says a lot for what they have done with the ModMic Wireless. The last three really just showed me how much background noise all three picked up. You could tell on all three that it wasn’t just picking up the noise, it was also carrying through the desk as well.