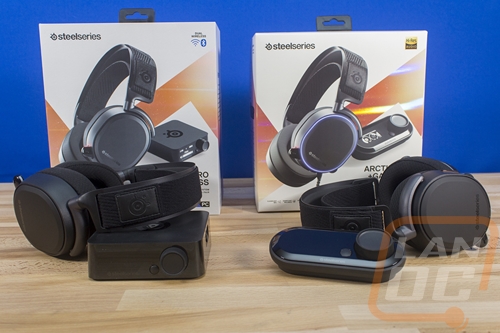 So for a month or two now I have been running the Arctis Pro Wireless as my main headset and I have slipped in some testing of the Arctis Pro +GameDAC in with that as well. So we can finally sit down and talk a little about how they both compare to past Arctis products as well as some of the competition. That testing included movies and music that I listen to when working and of course gaming when I can as well. Basically, everything all of you will be doing. Before getting into the audio performance and comfort I did want to touch on the setup and experience with each headset.

Starting with the Arctis Pro once I pulled everything out of the box I hooked the GameDAC up to my PC using USB and plugged the headset into the GameDAC using the included cord. The cord itself is designed to only fit one way and the recessed area on the headset is shaped to prevent you from using other cables. Once hooked up the GameDAC was picked up right away without any software being downloaded and it prompted me on its screen through a few things. Basically, they show you how to use the dial to flip through settings and with that they also run through a few different things you can set up. Basically, all of the instructions are on the screen, when finished they tell you to GLHF as well. 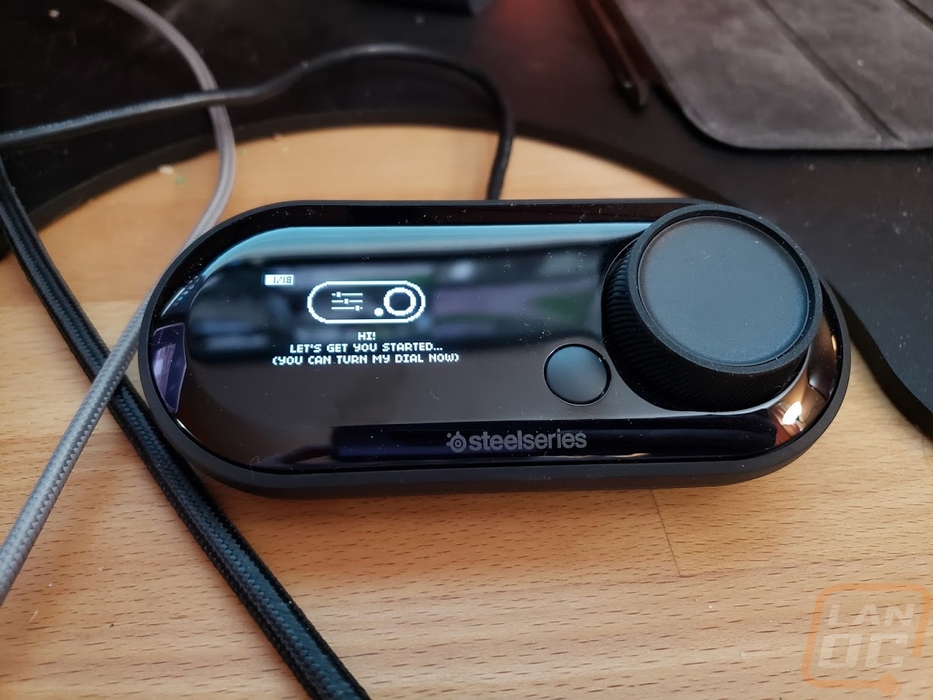 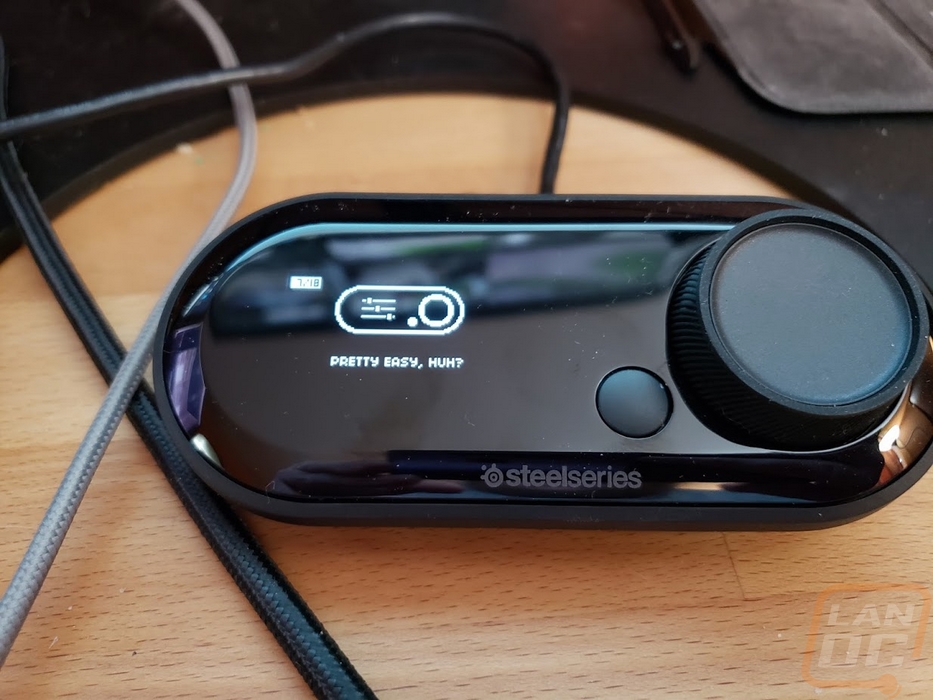 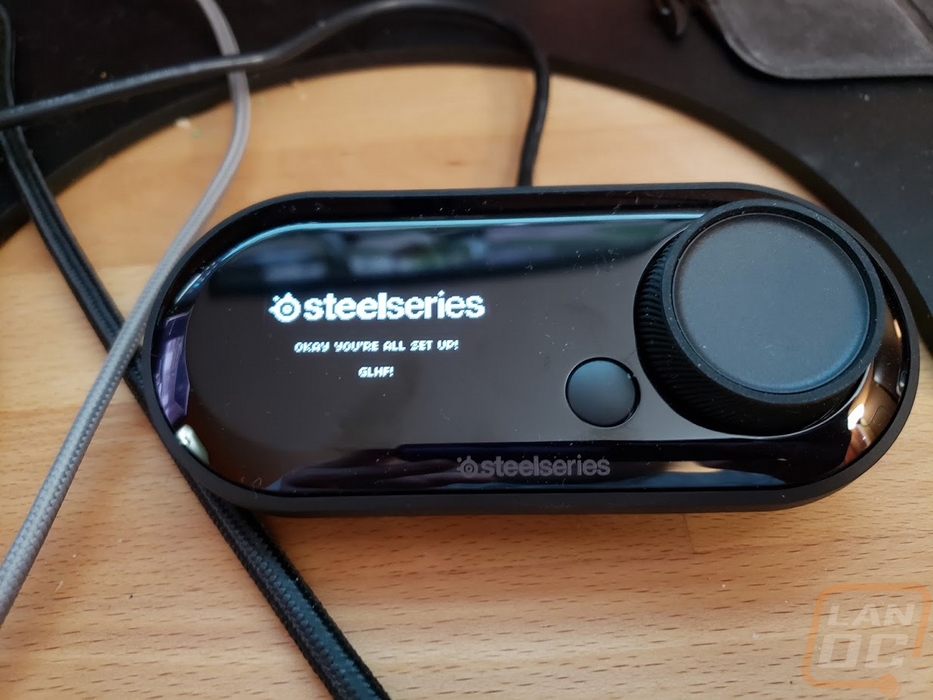 Once powered up the lighting on the Arctis Pro lights up around the earcups. You can also see the microphone mute LED here as well. 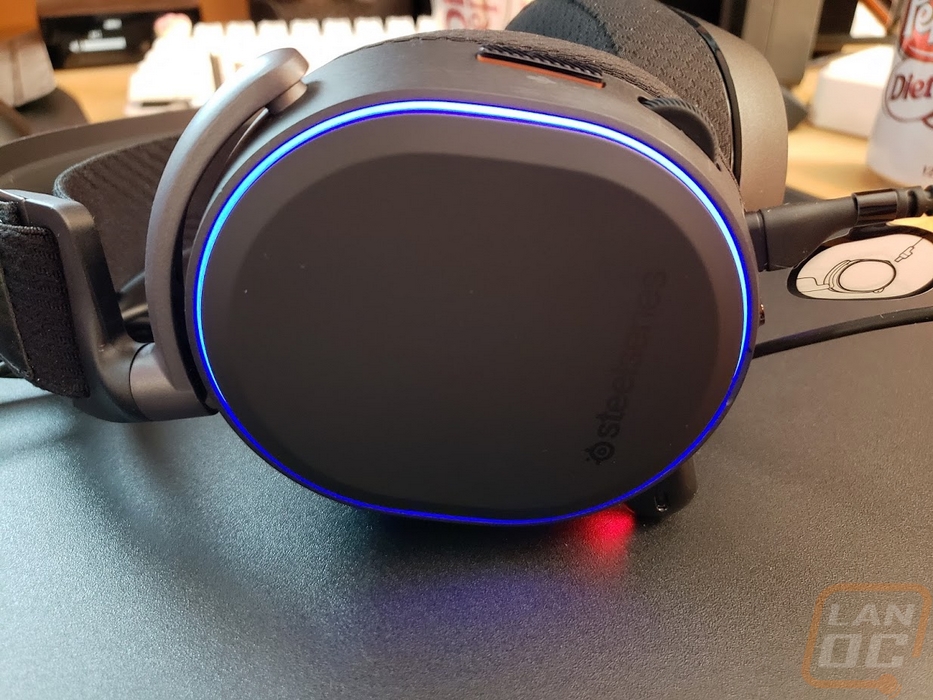 Once up and rolling the main screen you will see when using this with a PC has two main circles on it. The one on the left is the volume and on the right is the chat mix, this is where you can adjust more or less game volume in relation to your voice coms to help you hear someone when gaming. The screen also always lets you know if DTS is turned on or off, what input you are using right now in the top left corner, and then the current audio connection rate. 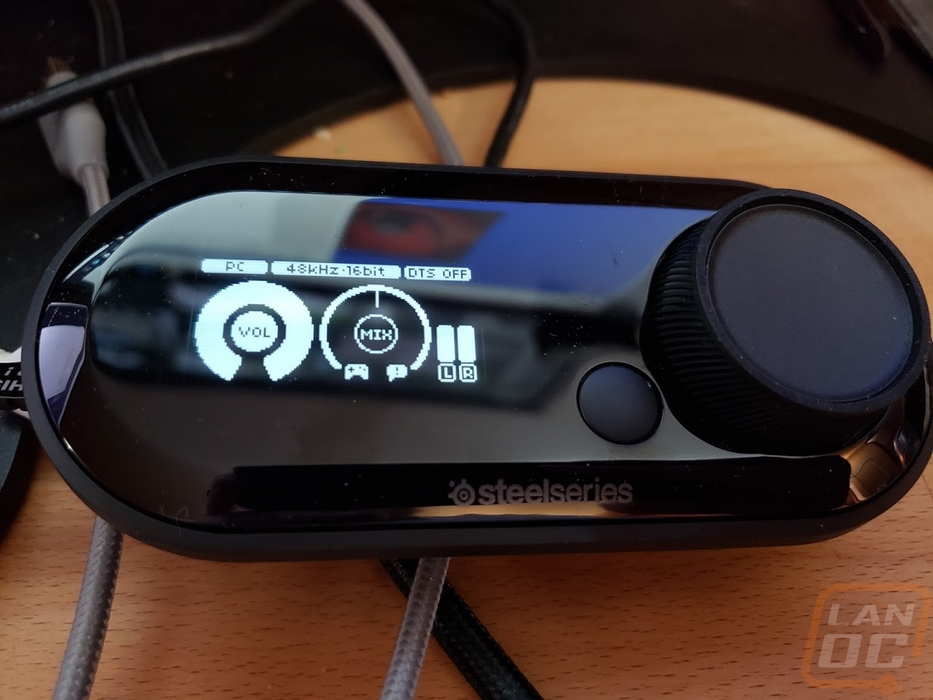 Switching over to the Arctis Pro Wireless, getting things set up was a little more complicated but not by too much. You have to get the transmitter or base installed. For PC use you can get away with just the one USB cable, but I made sure to hook up both that and the optional power so I can use the headset even when the PC isn’t turned on. The headset comes synced by default so there isn’t anything to do there. You just need to power it on and make sure the battery is charged. You can see the status of the battery in the top left corner and on the right that is the status of the battery you have charging in the base. 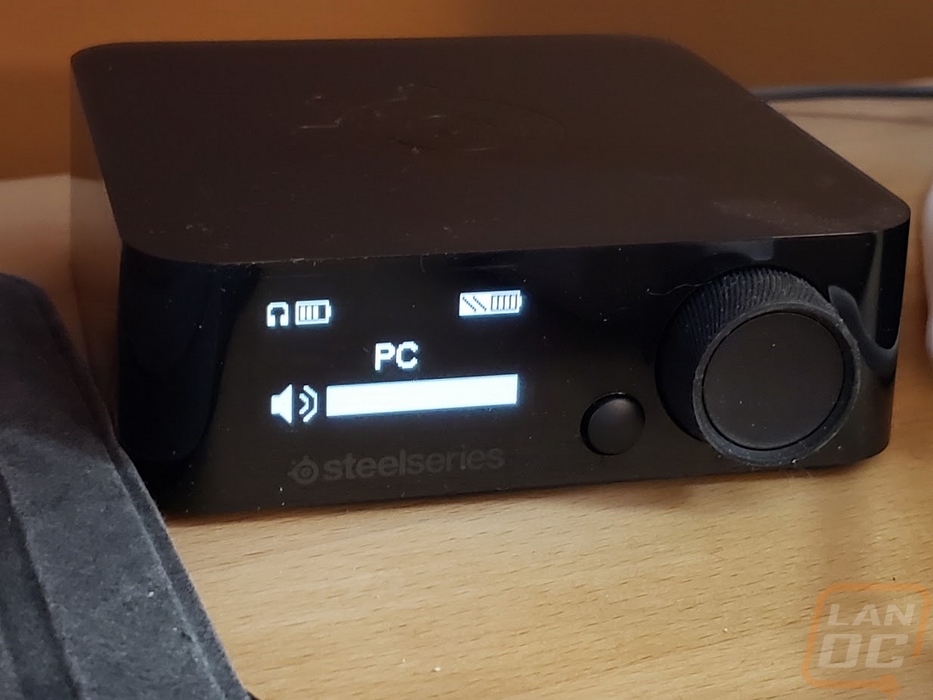 Once all hooked up the base guides you through a quick setup to pick your input device. Once setup it will show the input device on the main screen all of the time with a bar volume display. You can see I have it turned all the way up here. You can tell if you have the headset powered on because of the headset icon and battery status in the top left corner. You will notice in one of the pictures below the headset was off and nothing shows up in that area. 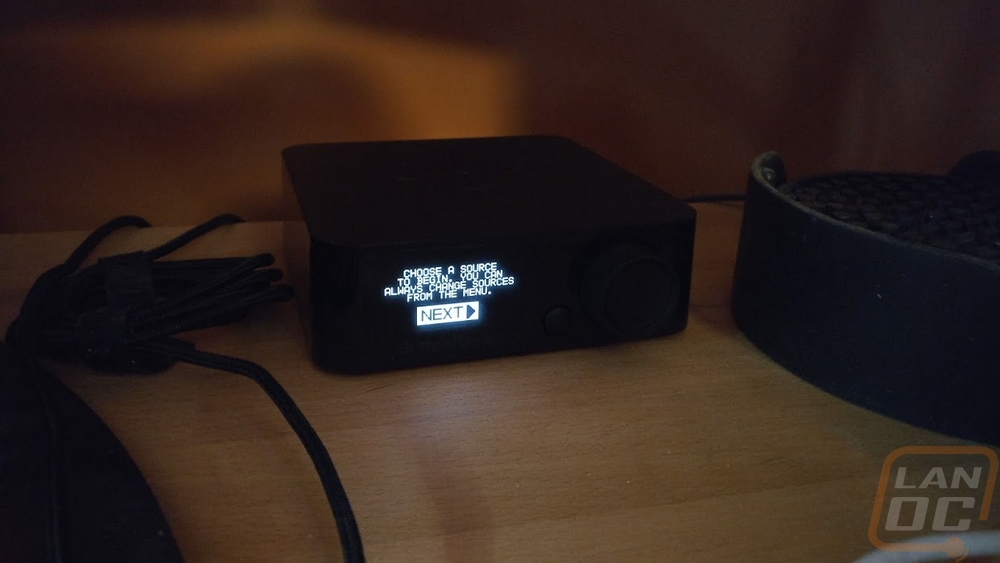 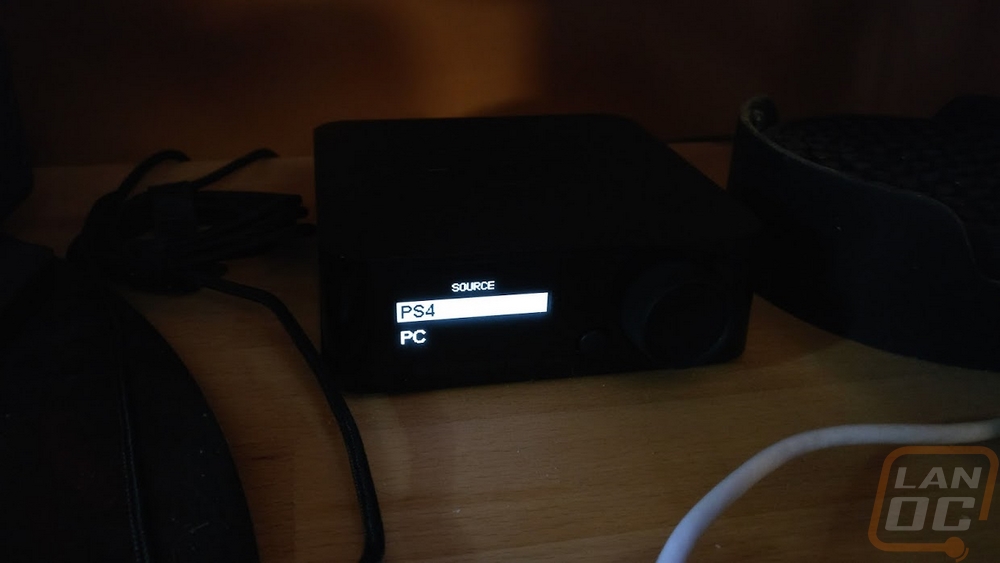 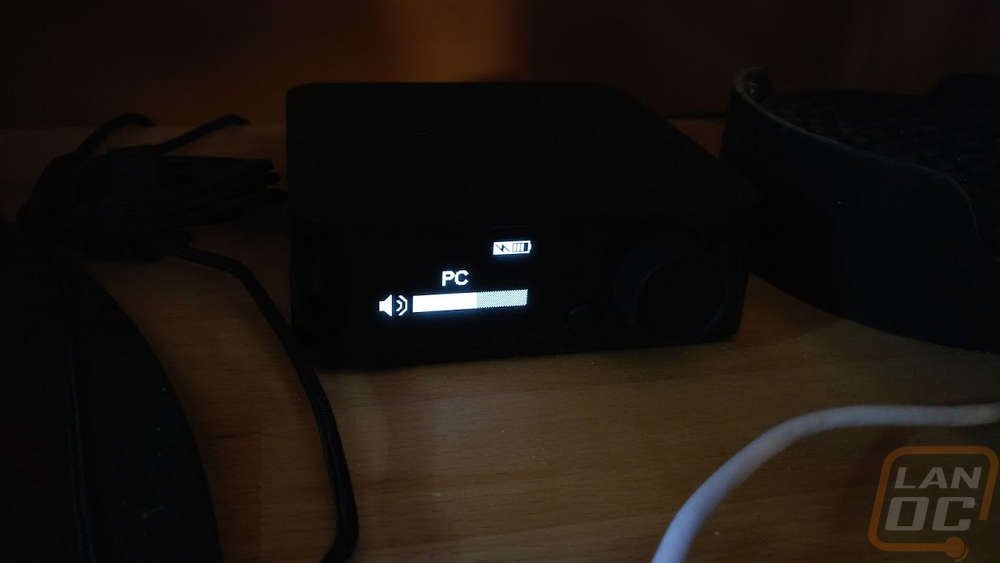 Next, I did download and install the SteelSeries Engine 3 from the SteelSeries website. Honestly, both headsets can function completely without the software but I did want to check for updates and as you can see from the first page all three headsets (Arctis 7 included) needed firmware updates. The software itself hasn’t changed too much in the past few years. You have the main page where you can see all of your plugged in SteelSeries devices. Then when you open one it will open up another window. I still don’t like that too much, I would prefer it all stay in the one window. But once open the software for the Arctis Pro + GameDAC gets us mostly the same options that are available in the DAC itself. You can turn DTS on or off, create your own EQ profiles or pick from a few basic profiles. 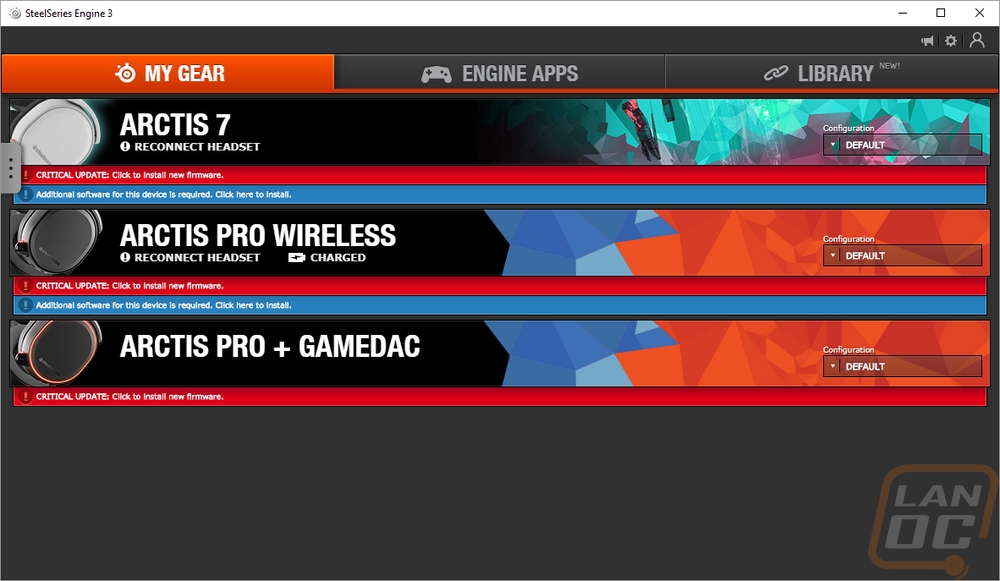 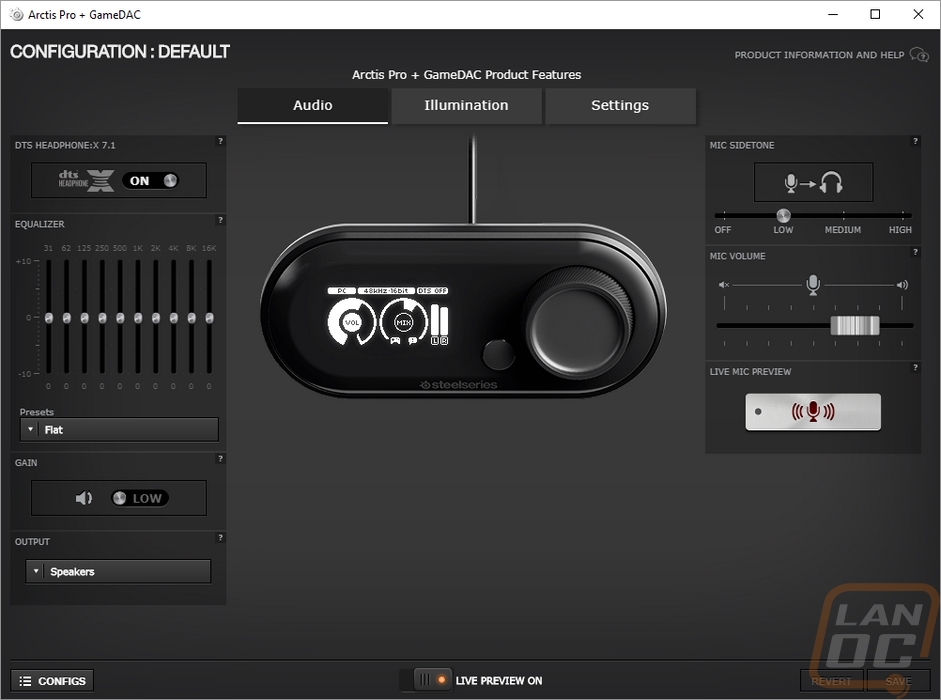 The lighting tab, on the other hand, did have some options. You can program the lighting for each earcup independently or together and the microphone LED as well. 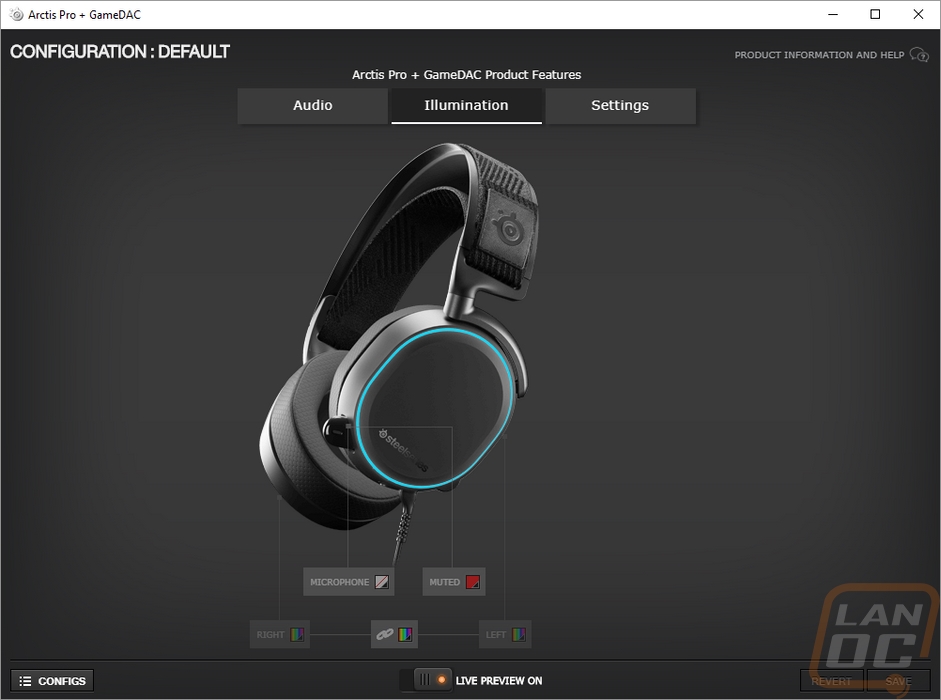 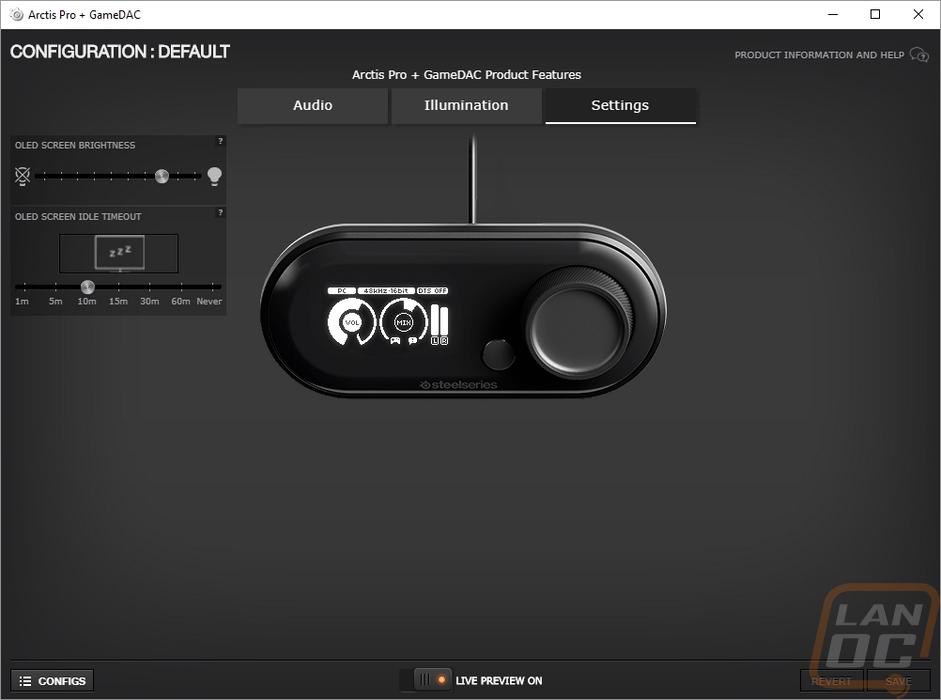 The Arctis Pro Wireless doesn’t have too many options as well but the EQ options here aren’t available on the controller. You will notice however that there are fewer EQ bars available than on the GameDAC. I was happy to see that they have added options on when the headset will turn off and how Bluetooth functionality works. This includes the option o mute game audio when you get a call. There is also a set of options for the OLED screen brightness and its screen saver. This is huge because with my H Wireless the screen did get really bad burn in over a few years of use. 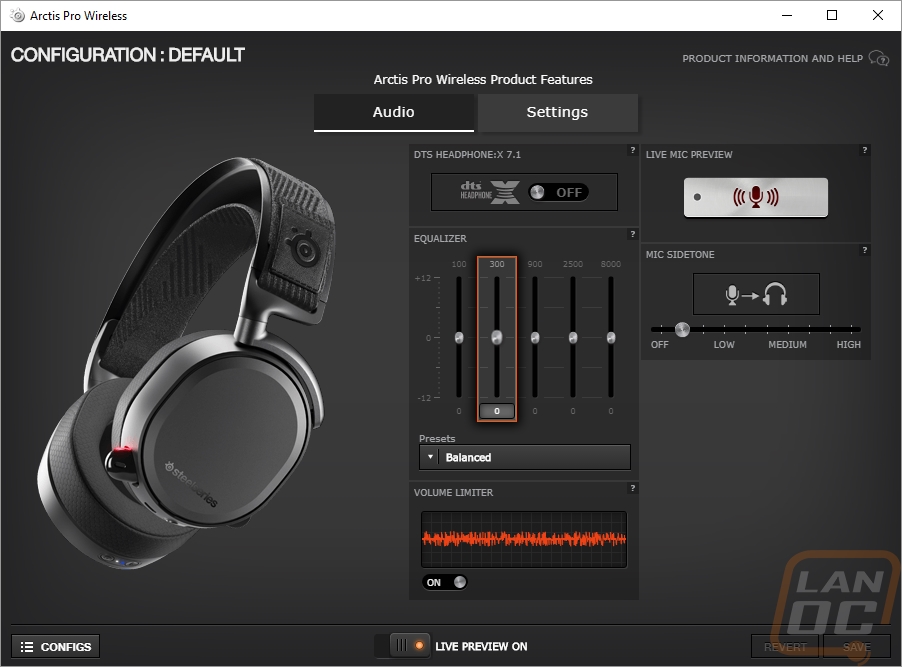 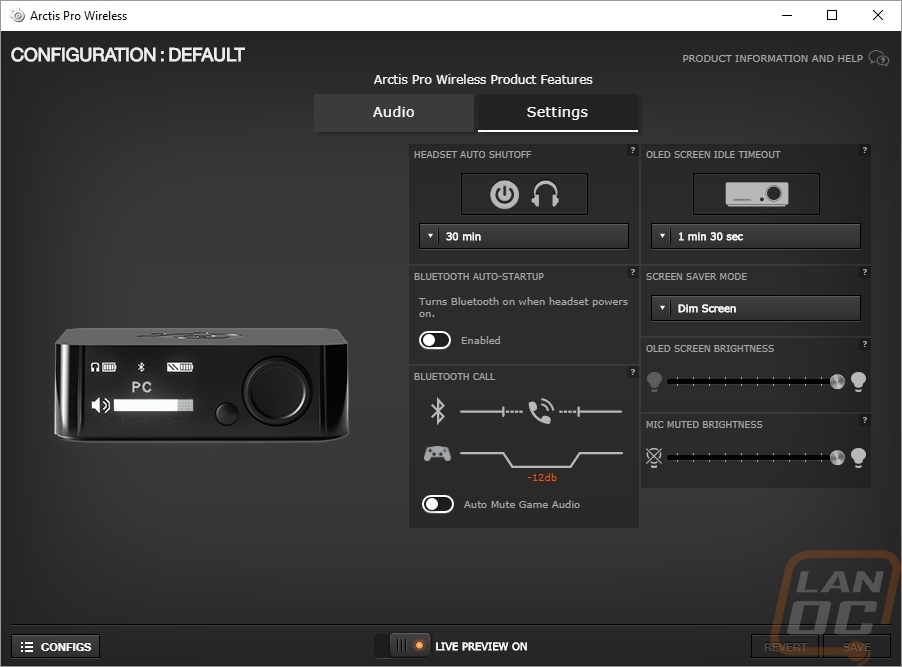 With all of the software and setup details setup, I could finally dive into some of the overall performance aspects. I wanted to talk about the comfort first because no matter how good a headset sounds I know I will personally never use them if they aren’t comfortable. Honestly, as long as SteelSeries didn’t mess anything up from the Arctis 5 and 7 I was going to be happy because those are still some of the most comfortable headsets I have. And yes, both the wired and wireless Arctis Pro models were still comfortable. The overall shape hasn’t changed and earcup padding is still memory foam with the same microfiber material. So they both fit around my ears well, fit my large head, and didn’t cause any noticeable issues. Now being a sealed earcup design they do still get a little warm like before, so I did spend a lot of time pulling an earcup off to cool down when heavy into gaming. I noticed also that when I first put them both on the headband was a little tight, but once it broke in its comfort actually improved.

So with comfort, I could talk about both at the same time, but for audio, I wanted to split my experience up for each headset because they can and will be different when it comes to having the GameDAC or wireless. Starting with the Arctis Pro + GameDAC I have to say that the audio quality was noticeably different, even coming from the original Arctis lineup. That alone said a lot to me, because the original 5 and 7 are both great headsets. I have spent a lot of time with high-end headsets from companies well beyond just gaming companies so my expectations were high with this headset. But I can say that SteelSeries impressed me. With the GameDAC and Arctis Pro paired up the audio was crisp and clear and WELL above what other gaming headset options have offered. Pairing them up together is also huge because a lot of people will spend a lot on a headset only to hook it up to onboard audio or worse.

That said I did notice that when I first tried out the Arctis Pro +GameDAC the volume was lower than I would have hoped. After some messing around I found that the volume control on the headset was turned down a little. So as a reminder, remember that the volume control on the GameDAC and on the headset itself are independent. Even with that turned up I wanted a little more, I had to dig into the settings and turn the gain up to the high setting. There are some EU rules that don’t let the headset be cranked up out of the box to protect hearing. Even beyond the audio performance, I was a big fan of the GameDACs screen showing the left-right EQ all of the time. Volume was easier to see and having the chat mix level visible should help some people who don’t realize they have it not in the center when they have audio issues.

As for the Arctis Pro Wireless, I spent even more time with this one because at my main desk I prefer to be wireless for my audio. It allows me to get up and get something to drink or even go to the bathroom without missing out on voice communication from the people I’m playing with. That said typically wireless audio performance is a step below a good wired setup. Going from the Arctis 7 that I use every day to the Arctis Pro Wireless there was a noticeable improvement in audio performance. With double the frequency range that wasn’t a big surprise. That said when wiring the same headset up to my DAC the performance did improve. I don’t think you are going to find a better sounding wireless solution though.

The big thing for me was getting the hot-swappable batteries back. That was honestly the biggest issue I had with the Arctis 7 and even after using it for a year I would still forget to plug it in until it died in the middle of a game over and over. That isn’t an issue with the Arctis Pro Wireless, battery life is between 9 and 10 hours for each battery so unless you are using them 24/7 you won’t have to swap it out each day, but when they do die in the middle of your game you just grab the already charged battery and you are good for another 9/10 hours. I was a little disappointed to see the same transmitter base as the H-Wireless. I would honestly be fine with a much smaller option that just could charge the battery. But the extra connection options could be nice if you have a game console at your desk. I don’t myself, not anymore at least, so the extra money spent having the screen and input switching would be better spent somewhere else. Wireless range was great, I could get to almost anywhere on the main level of my house without it disconnecting so sneaking off to do something wouldn’t mean a missed queue or anything like that.