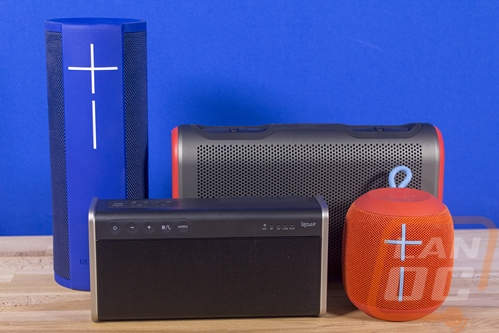 So Ultimate Ears sent over two different speakers, I wanted to start off with their big and bad new flagship portable speaker, the Megablast. The Megablast and the blast came out last fall and in a lot of ways they look a lot like the Megaboom and Boom 2 but the biggest feature change isn’t even a hardware one. Both of the “Blast” models have Alexa built in, so in addition to being a portable Bluetooth speaker, it is also a portable assistant. This was unique and this is the only speaker out of the ones I’m testing that has this feature so I was very interested in how it would work out. Before getting into the rest of the features though we do need to see what comes in the box.

So the box itself has a slide on cover that is black and has the Ultimate Ears branding up in the top left corner. An actual picture of the speaker takes up most of the space and what stood out to me was that the packaging has the actual color of our speaker on it. You can get the Megablast in four different colors and I went with blue. Normally they would just do one color then have an area with a sticker or a checkmark on the color inside. The box does highlight the Alexa support but on the other side it also mentions it being waterproof, the WIFI/Bluetooth support, 360 audio, and up to 16 hours of battery life. 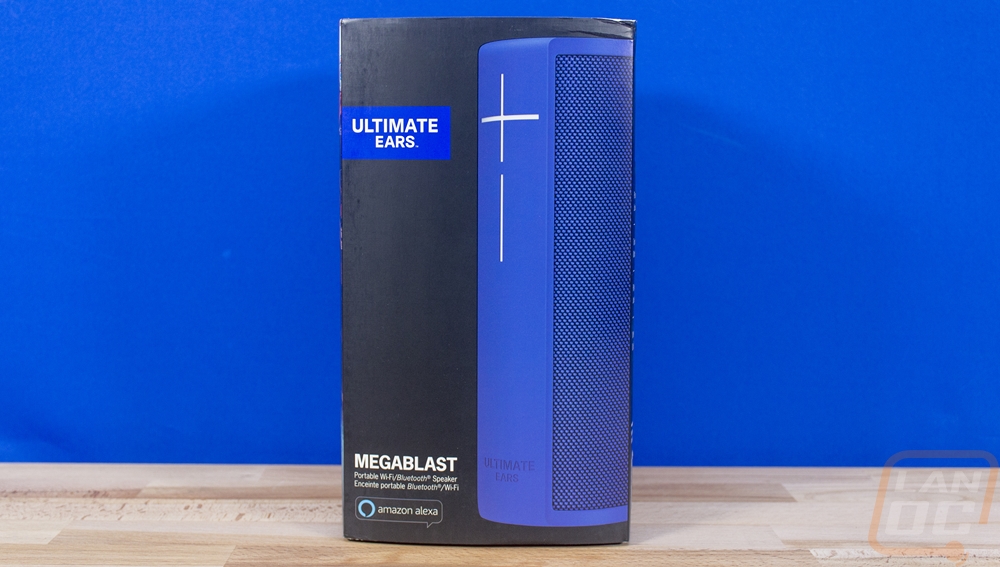 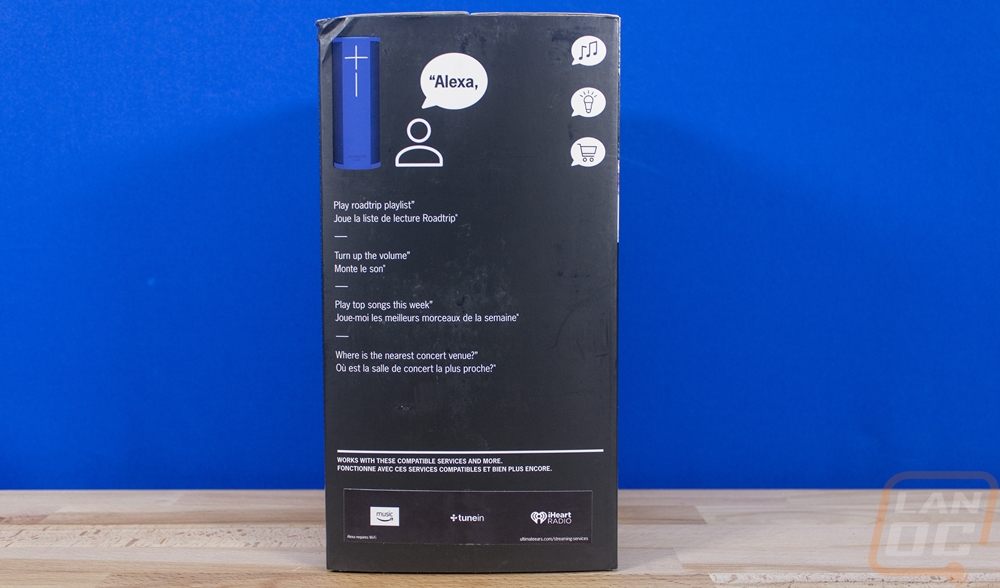 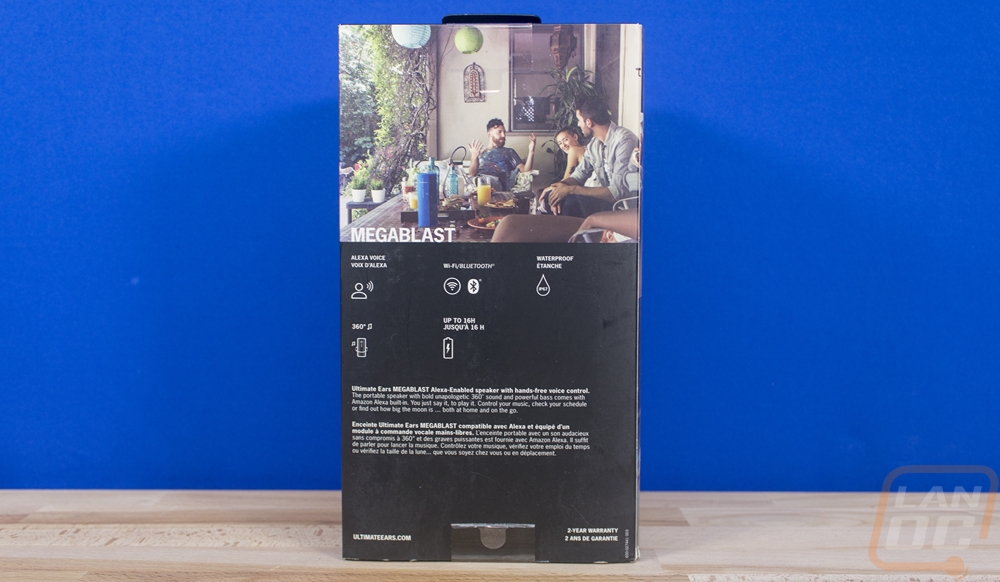 The inside box was shockingly bright with all of the different colors. This fits Ultimate Ears though, they do a lot of crazy designs on their speakers working with different artists sometimes. Inside the box, the speaker has foam at the top and bottom keeping it in place. Beyond that, there is a note about installing the app to get started and then you can pull out a section to get access to the accessories. 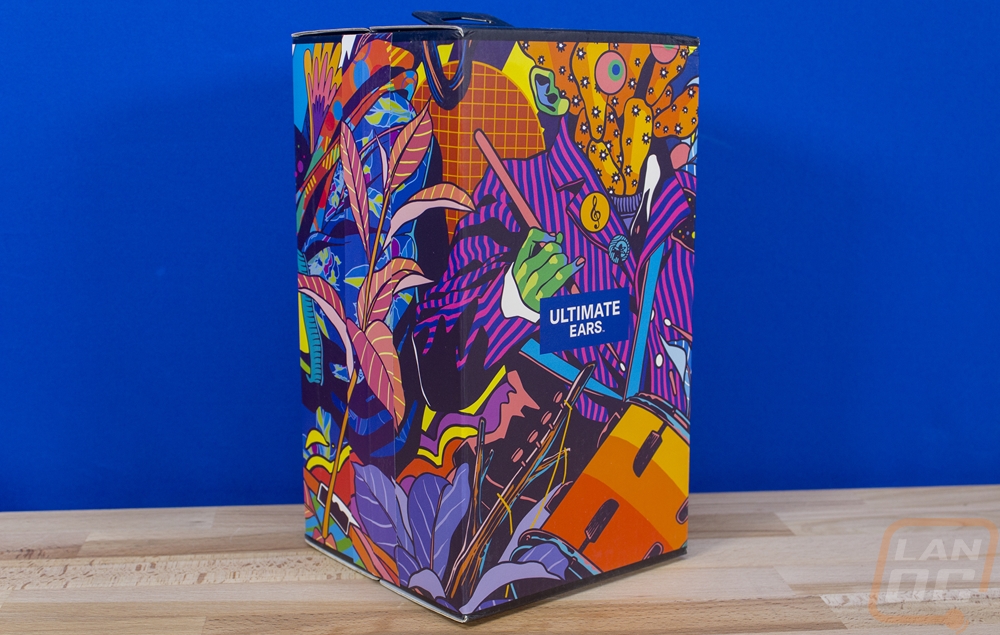 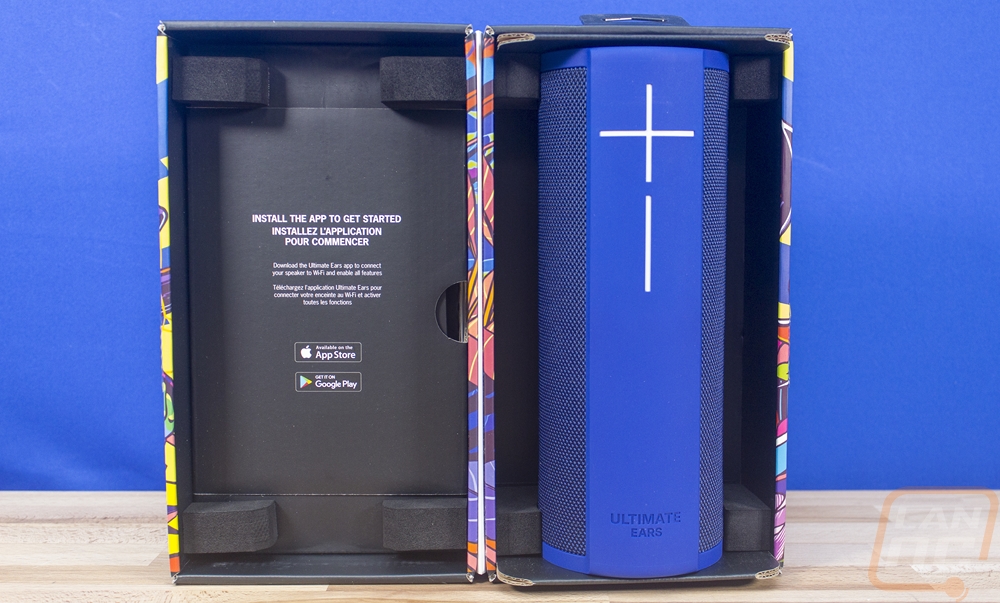 They include an AC to USB wall adapter and a USB cable for charging. The cable is a heavy rubber but flat design that should hold up well. 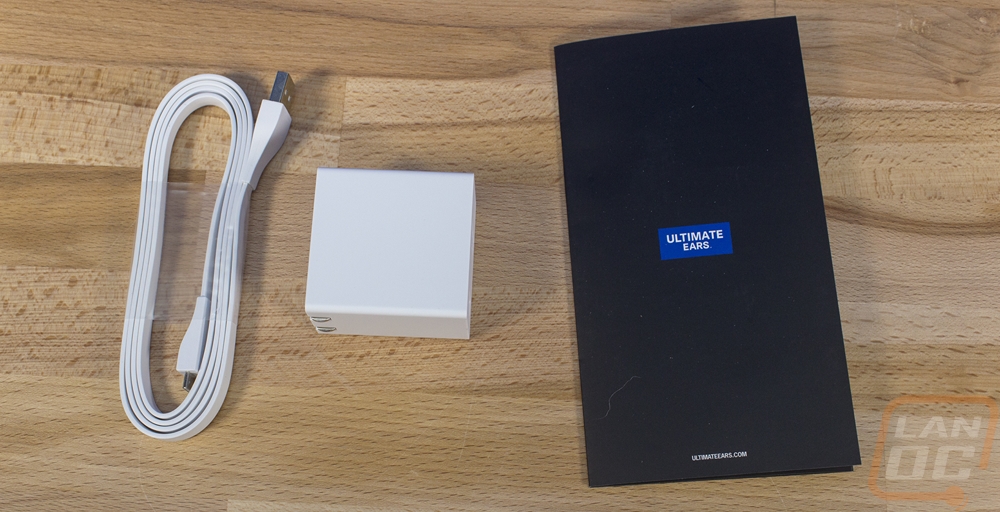 With the speaker out we can talk a little more about its overall design. For starts, this is the largest speaker that I had come in. It is 9 and 3/8ths inches tall and a 3 ½ inch wide tube. That isn’t HUGE or anything, but keep in mind that it isn’t going to fit in a purse unless you have one of those Mary Poppins bags that can hold anything. It is still more than portable enough though at that size to take with you on vacation, out to the beach, or anywhere else. 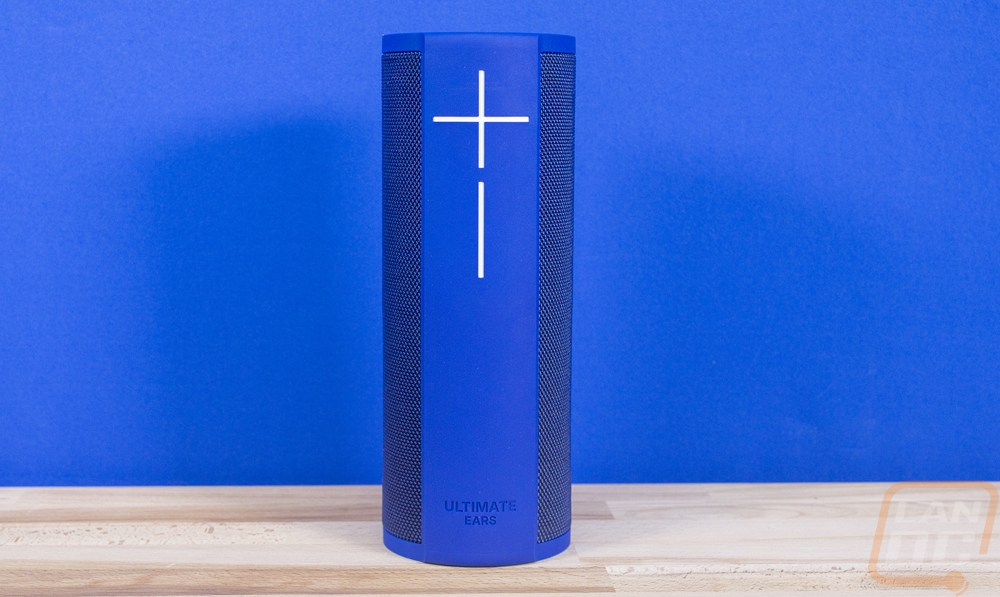 The speaker grills cover most of the tube portion with the exception of the front. This is the 360 degree sound that Ultimate Ears mentions. They mention having two 25mm tweeters, two 55mm active drivers, and two 85mm x 50 passive radiators up under the grill. The grill itself is a thick fabric. You can’t see through it at all but it is a mesh. I also love that the grill matches the blue that the rest of the speaker has going on. 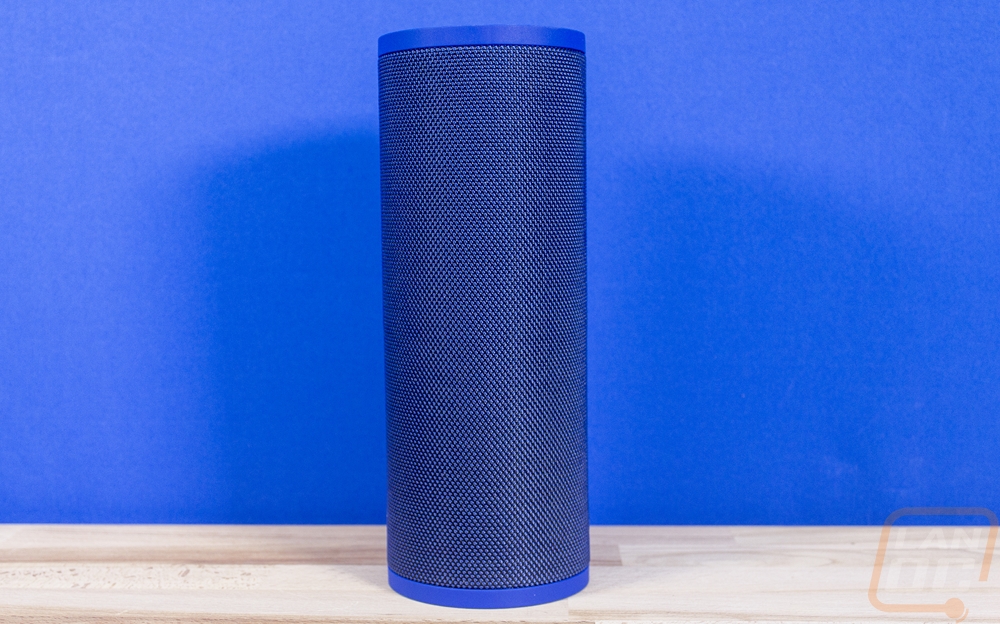 There are only a few controls on the entire speaker. You have a plus and a minus sign on the front and then two buttons on top. The plus and minus really stand out because they are in bright white on the blue and their design is an Ultimate Ears styling cue that they use on all of their speakers for volume control. Oddly enough this was also the first thing that others noticed, mentioning it looked like a cross. Now, this isn’t the place for a heavy discussion like that, but I will say that this could be a good thing for some and others a bad thing. I heard from both when showing people. Now the top buttons, one looks like a coin slot. That is the main power button, the slot lights up white and lets you know when Alexa is listening. The other button was used for Bluetooth pairing. That same button should also play/pause/skip as well if needed. 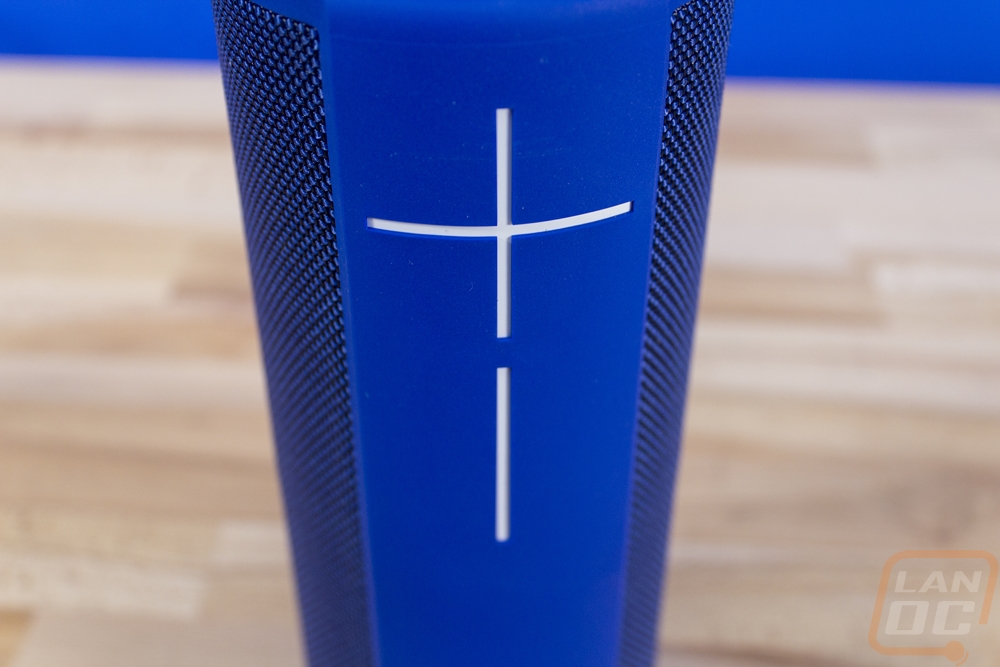 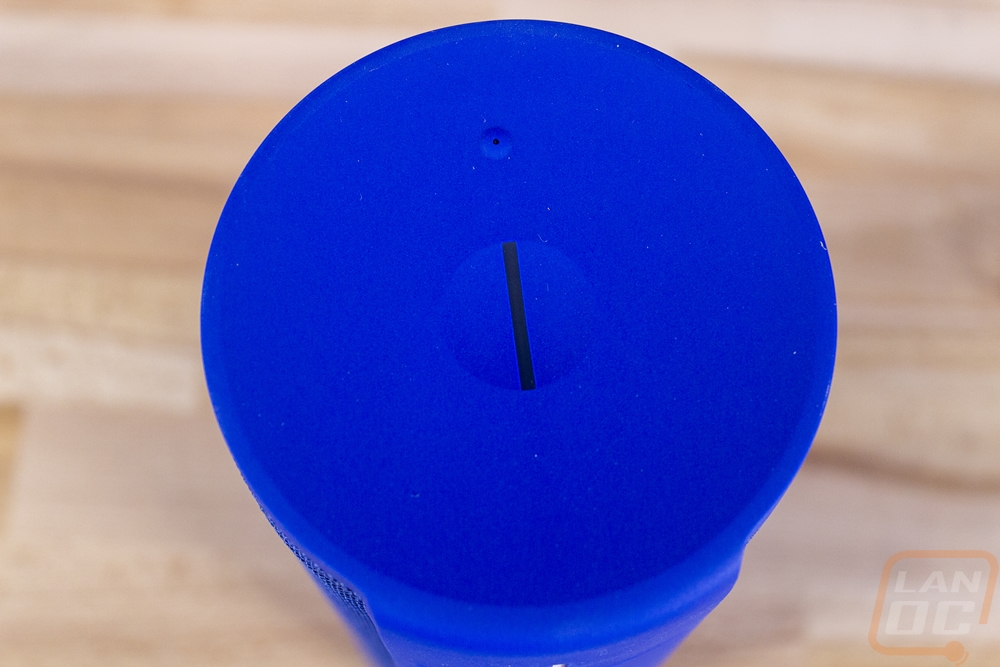 The bottom of the Megablast, like the top and front, is all a nice silicon rubber. All of the normal required stuff is actually cut into the bottom including the serial number. Then in the middle, they have a plug covering the micro-USB charging plug. The insert or plug is held in place with a metal nut with a flip out half ring to make it easier to screw down. 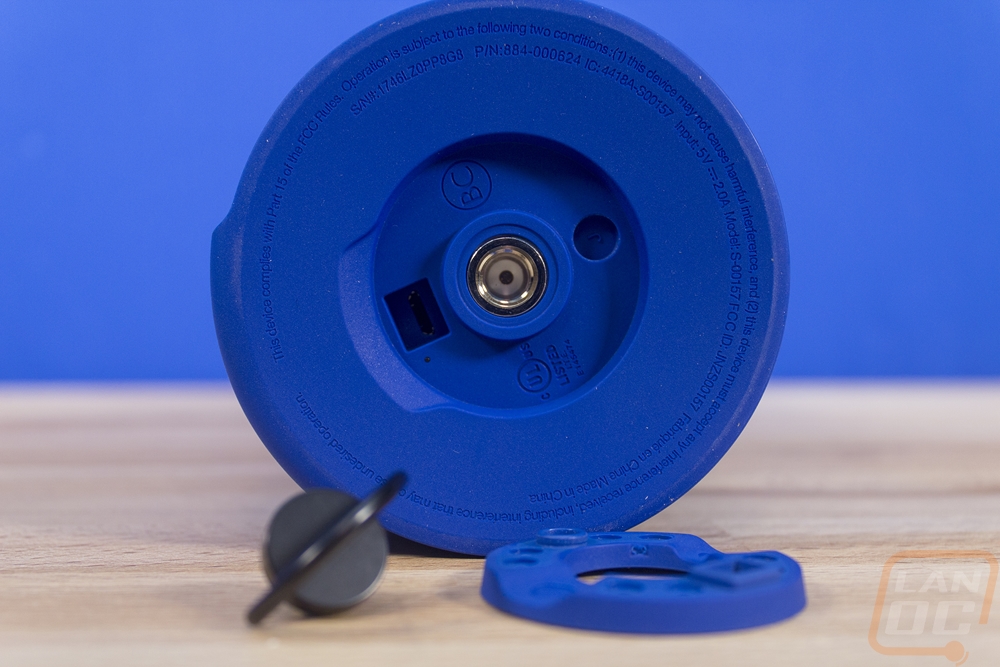 Now Ultimate Ears also send along their Power Up accessory. This is a charging base that fits the Megablast and the Blast. The box has the same black background and blue logo, it also has the blue Megablast in the picture on the back. Inside it has a warranty paper and simple install instruction sheet. 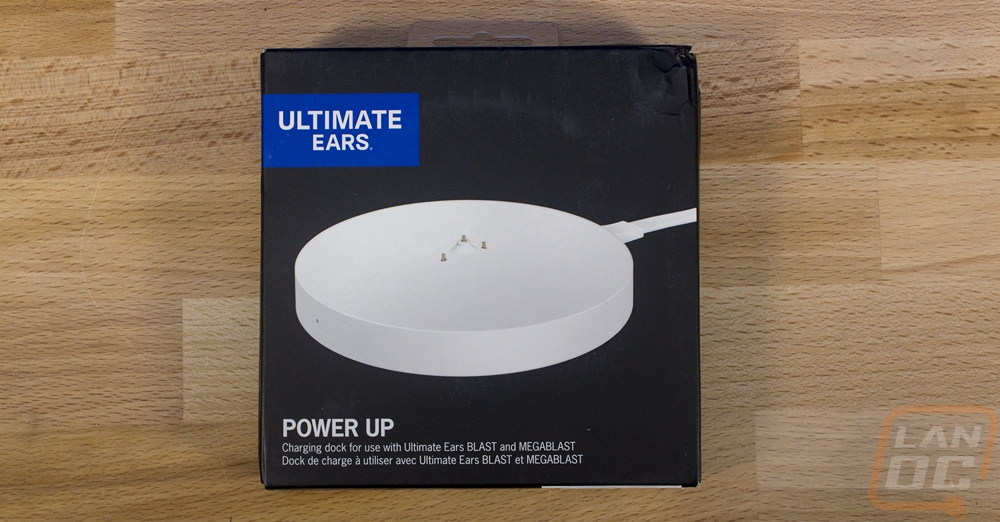 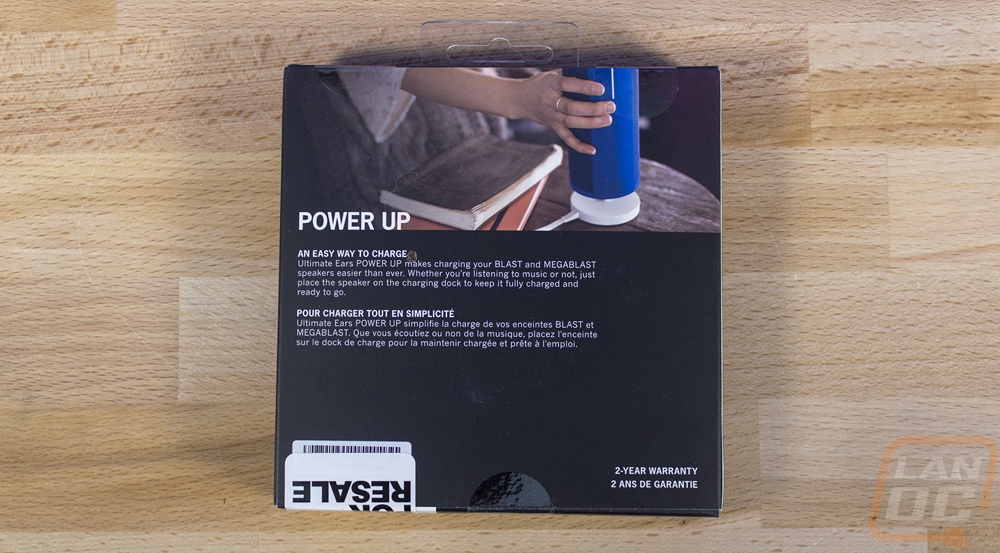 Also inside is the charging base itself and a replacement thumbscrew for the bottom of the speaker. They don’t include an AC adapter or a USB cable because those are both included with the speaker itself but both will be needed. This charging setup is an additional cost when picking up the Blast or Megablast and its MSRP is $39.99, so it isn’t exactly cheap as well.

So what makes all of this work is that replacement thumbscrew. The original is black and simple. This replacement is unique in that it has a connection in the middle and then the rest is also a connection letting a positive and ground through to charge. I originally thought that maybe they did wireless charging or had a terminal already exposed on the bottom of the speaker. This design is really cool though. It is low voltage DC as well so even sitting in water isn't going to be an issue later for the speaker. So to get everything setup you swap out the original for this one. Then you plug your original USB cable into the charging base. 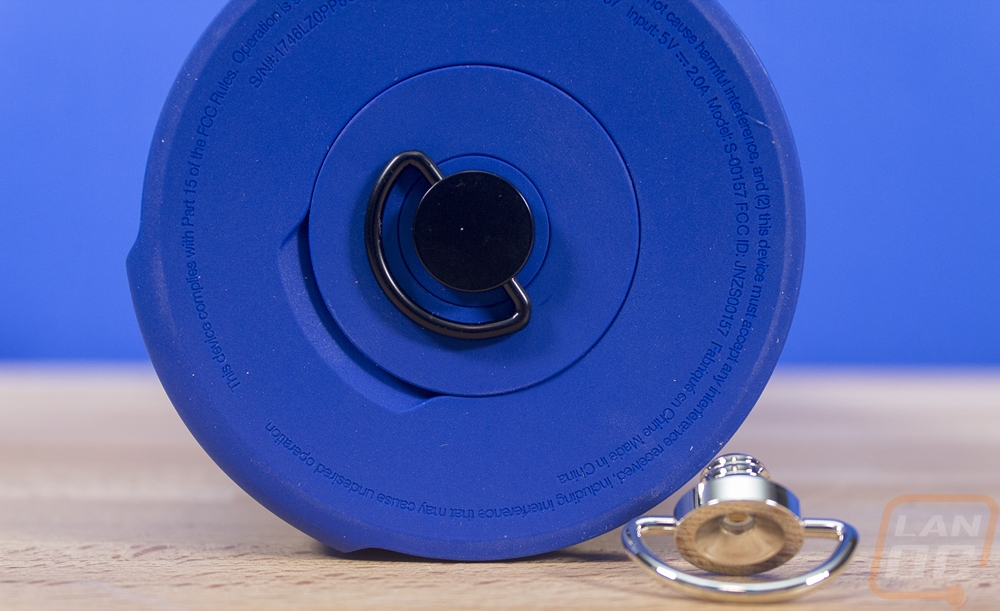 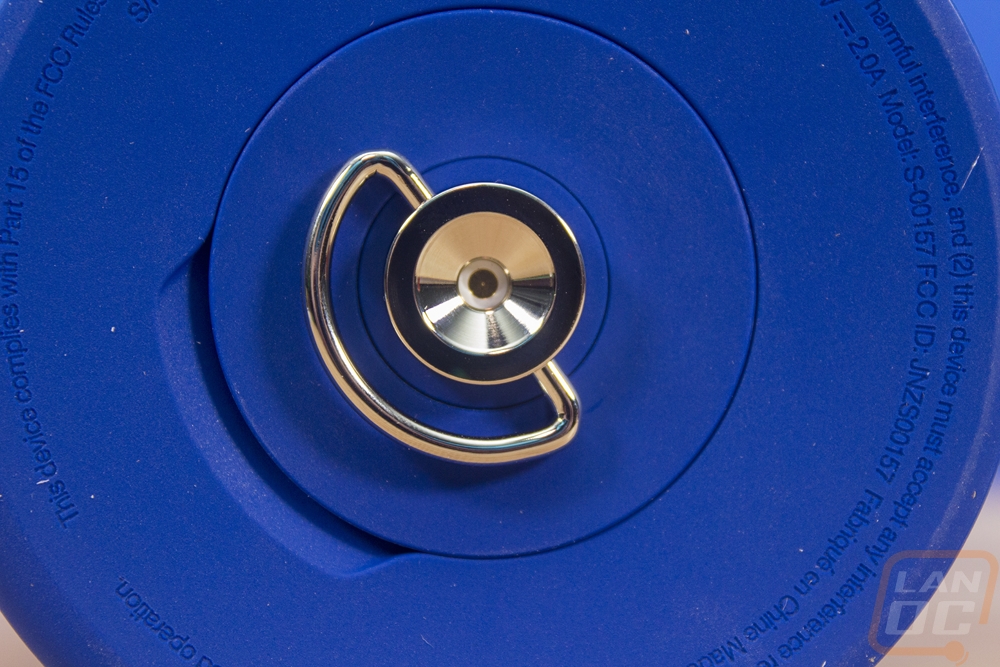 The Power Up has a full rubber base for good grip. They also used this area to put all of that normally required info for an electronic product. 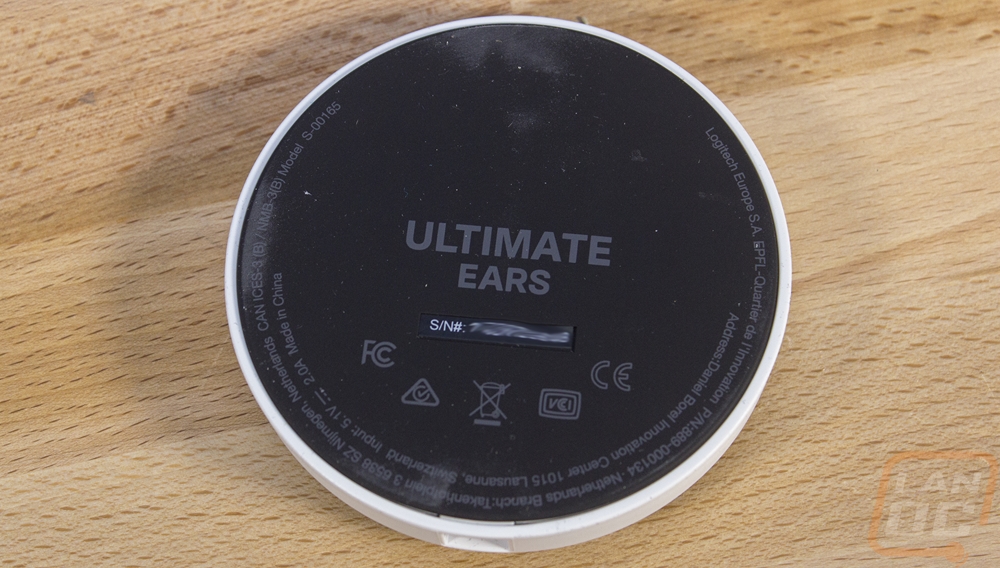 When setup there is a tiny LED light on the front that will let you know if it is charging.

We have 1078 guests and one member online