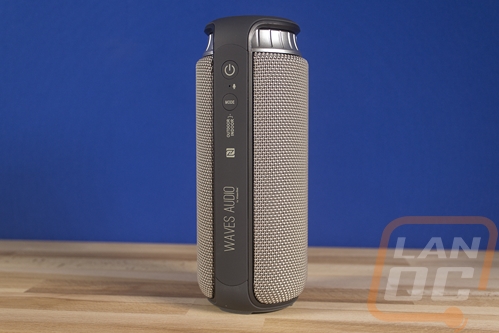 So I will be the first to admit that portable speakers aren’t exactly the best fit for me. I don’t get out that much in situations where having a speaker with me outside or even in gathers would be helpful. Typically I normally only use them when I’m outside in the garage working on something or from time to time I have used them with a projector for improved audio. That said I have had more than a few come into the office including speakers from big names in the industry like Bose and Creative Labs. In the last few years, they have all been of good quality, unlike the older ones I would get as swag at events. Of course, the pricing of them also reflects that. The Waves Audio by VisionTek SoundTube Pro was in line with what I have experienced from the other speakers. Audio quality was good, more than good enough for small get togethers, outdoor use, audio around the house for anyone without a stereo, etc. I was especially impressed with the amount of bass when in indoor mode with it sitting on my desk.

Now the NFC connecting was extremely quick but I wish I had the option to sync without it as well. I also liked that they went with micro-USB for charging as most people have those charging cables all over their house and cars. The location of the charging port, as well as the auxiliary port, however, could use work. It was on the bottom of the speaker so you can’t sit it on the horizontal feet and charge at the same time. The 360-degree volume control was also nice but could use a little more grip/traction to make it easier to use one handed.

Overall I found VisionTek’s portable speaker to be good, but I do hope they continue tweaking it in the future as a few small changes would make it much easier to use. The $99.99 MSRP isn’t out of line compared to all of the other portable speakers or the performance of the SoundTube but I was happy that looking online I could find it much cheaper ($67.99). At that price, they don’t have to have a big name like Bose and it brings it more in range as a gift or pickup before vacations. 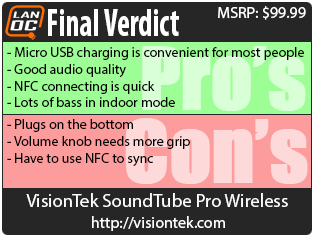 You might call him obsessed or just a hardcore geek. Wes's obsession with gaming hardware and gadgets isn't anything new, he could be found taking things apart even as a child. When not poking around in PC's he can be found playing League of Legends, Awesomenauts, or Civilization 5 or watching a wide variety of TV shows and Movies. A car guy at heart, the same things that draw him into tweaking cars apply when building good looking fast computers. If you are interested in writing for Wes here at LanOC you can reach out to him directly using our contact form.
Discuss this article
Log in to comment
Posts in discussion: VisionTek SoundTube Pro Wireless Speaker

We have 1096 guests and one member online