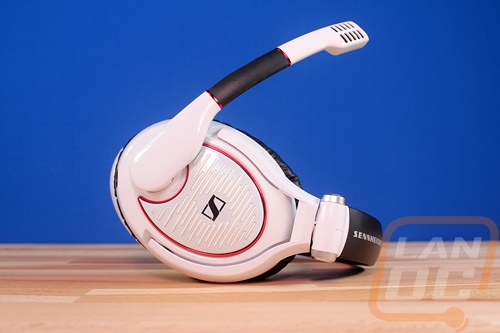 Sennheiser is a huge name in high-end audio, a lot of people prefer their headphones and you can often spot them being used on television and in music production. That is important to keep in mind when you thinking about how big it is that they continue to offer a few headsets focused on gaming. The truth is a lot of the fluff that you see on normal gaming themed headsets and products, in general, doesn’t amount to anything when it comes to actual performance. Sure they look cool, have your favorite team on them, or have vibration effects but do they sound good? On average the gaming headsets on the market haven’t really been top tier though I will admit that I think SteelSeries and Logitech have made big improvements on audio and microphone performance recently. But for those of you who have spent more on your entire PC setup than some gently used cars the options on the ultra high end have been very slim. You can go with a ModMic and a pair of headphones with there being a good chance those headphones are Sennheiser's or you can pick up one of their gaming options. So today that is what I have been testing, their Game Zeroes.

With everything I said about Sennheiser in mind and having already taken a look at their cheaper GSP 300’s and their PC-350’s YEARS ago it is safe to say that the Game Zero’s are a good headset. But are the worth the money? First off, the audio quality is as good as you can get in any gaming headset, same goes for the built-in microphone. The performance was well above even my favorite headsets. The large earcup design is comfortable, even when wearing them for extended periods of time and the sealed design did cut out a lot of the background noise in my office. Not an easy task given how loud the window AC is and with 3d printers running. But I did have issues with my ears getting warm, I think their Gaming One’s would be a better choice if your ears heat up like mine though I would have to test them to be completely sure. I also never thought I would complain about a cord being too long but it did end up being an issue for me. For most people though the long cord is most likely a benefit.

So with the Game Zero’s sitting at $280 for the MSRP are they a good buy? Not really, they are amazing but spending three times what a good headset cost is hard to justify. That said you can pick them up on Amazon for just under $170 as of publishing this. When I originally got them in they were $178 so the price has been dropping. At that price the top of the class performance actually makes a lot more sense and starts to really compete with wireless headset options as well. If you want the best possible performance, I’m all about the Sennheiser Game Zero’s to match your upcoming Threadripper/x299 build or for anyone who wants audiophile performance in a gaming headset without having to add your own microphone to a good pair of headphones. 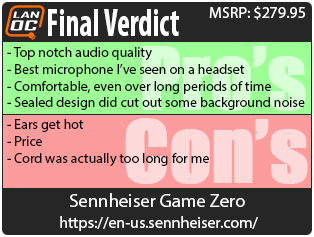 You might call him obsessed or just a hardcore geek. Wes's obsession with gaming hardware and gadgets isn't anything new, he could be found taking things apart even as a child. When not poking around in PC's he can be found playing League of Legends, Awesomenauts, or Civilization 5 or watching a wide variety of TV shows and Movies. A car guy at heart, the same things that draw him into tweaking cars apply when building good looking fast computers. If you are interested in writing for Wes here at LanOC you can reach out to him directly using our contact form.
Discuss this article
Log in to comment
Posts in discussion: Sennheiser Game Zero