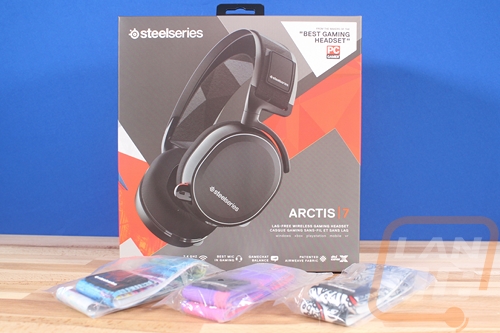 For testing I have actually been using the Arctis 7’s off and on over the last month and a half or more. This gave me a lot more time with them than normal to really get a good idea of how the perform. I knew I liked the Arctis 5’s but with wireless headphones there are sacrifices that have to be made as far as audio quality is concerned, not to mention wireless headphones normally weigh more.

So I started off with comfort testing, if I can’t keep a headset on for a long period of time or if it doesn’t fit well, nothing else matters right? So comfort wise they are a lot like the Arctis 5’s that I loved. The microfiber finish on the earcups is very comfortable and the padding is thick and fits around my ears without pushing on them at all. The new headband design did feel a little weird when compared to the 5’s. Early on I messed around and swapped to one of the replacement bands but I never fully got it back to the way it shipped and it felt a little looser. I would still consider the headband design very comfortable and the elastic was a good replacement for a lot of padding, it never pushed on my head when testing. Even in long sessions. The Arctis 7’s are most definitely heavier than the 5’s but the headband and good earpad design helped prevent that from pushing on any areas causing discomfort. To confirm they weren’t just good with large heads I also had my wife try them on and it gave me a chance to get a few photos of the headset in action as well. She found them comfortable noting that she likes the aluminum headband on the 7 more and she did notice the weight. She uses the Arctic 5’s daily but was really happy with the 7’s as well. The pullout microphone is out of the way when not in use and had good flexibility when pulled out to get it wherever you need it. 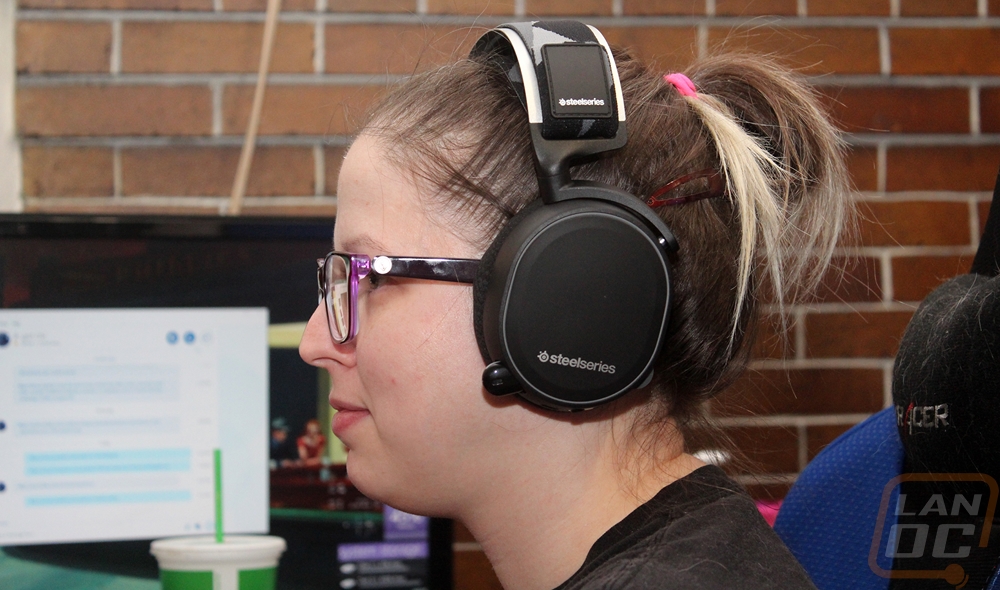 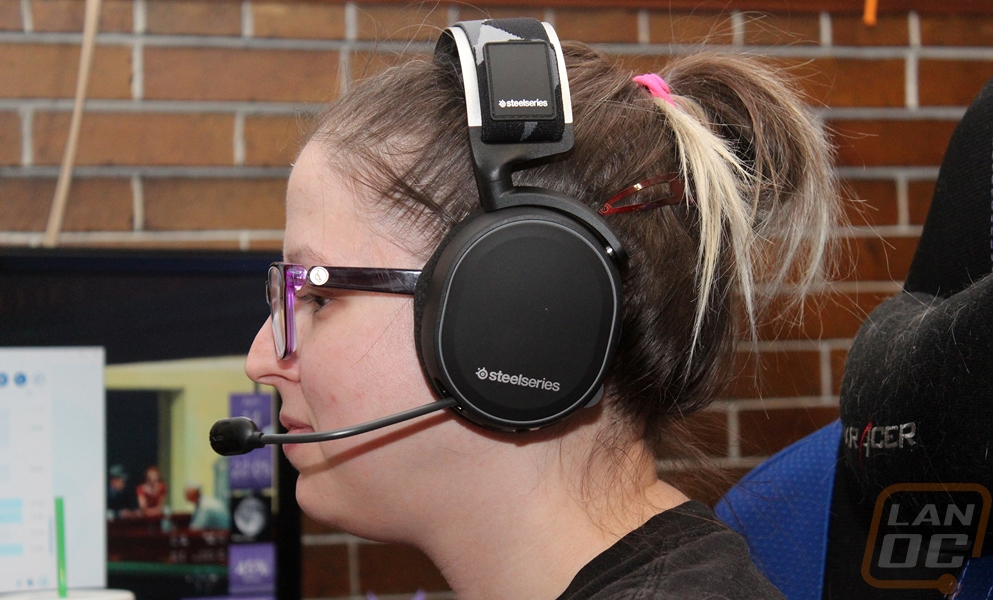 For audio performance, they were a noticeable improvement over the H Wireless that in the past I have used as my main headset but they were just a touch behind the Arctic 5’s and with that behind all of the other high end wired headsets. They were comparable to the G533’s if not better. Games sounded good with good directionality and music and movies had clear audio and good bass. I really can’t complain at all about the audio performance for a wireless headset. The microphone, on the other hand, was noticeably worse than the Arctic 5’s but still better than older headsets like the H Wireless. This is where they seemed to have to make up the difference. With the 5’s on coms people actually pointing out how good my mic sounded where the Arctic 7’s blended in with the other good enough but not amazing microphones. Given the same microphone is on both headsets I assume it was a compression thing and when looking at the specifications later there is a big difference.

As for the wireless aspects. I had good range when running the wireless adapter on my desk. Having it near my PC and the wire rack that my PC sits on didn’t do much for the range but getting away from that Faraday cage helped reach the bathroom and kitchen in our house, not very far but no other wireless headphones reach farther. I love that they included the game/coms mixer on the 7 still and the volume control was easy to use. As for battery life, SteelSeries mentions 24 hours of use and I honestly lost track, only having to charge them up every great once in a while. Now I still miss the hot swappable batterys of the H Wireless but good battery life is an okay replacement for it. I do wish they had a battery that was at least easy to replace though. Just looking later in life, it would make things easier.

I took a look at the software as well. The Arctis 7’s use the SteelSeries Engine 3 just like most of their other devices. So if you have more than one device you can control it all in one place. When you first open it up you can see all installed and previously installed devices and pick from them. Any that need a firmware update will warn you with a red stripe as well. The actual software page was simple with a photo of the headset on the left. Then on the right, you can get into a few software level adjustments of the sound card. You can turn on DTS for a simulated 7.1 experience, personally, I didn’t like it though. There is a small EQ with presets. Then there are a few microphone settings to turn on side tone to hear your surroundings, preview your microphone, and a mic volume control. 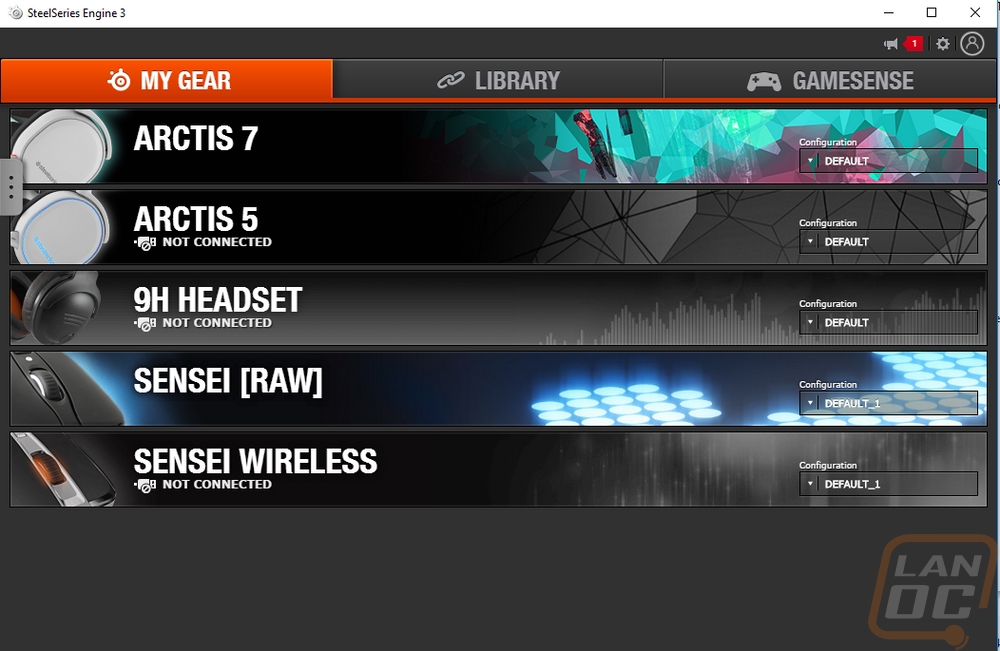 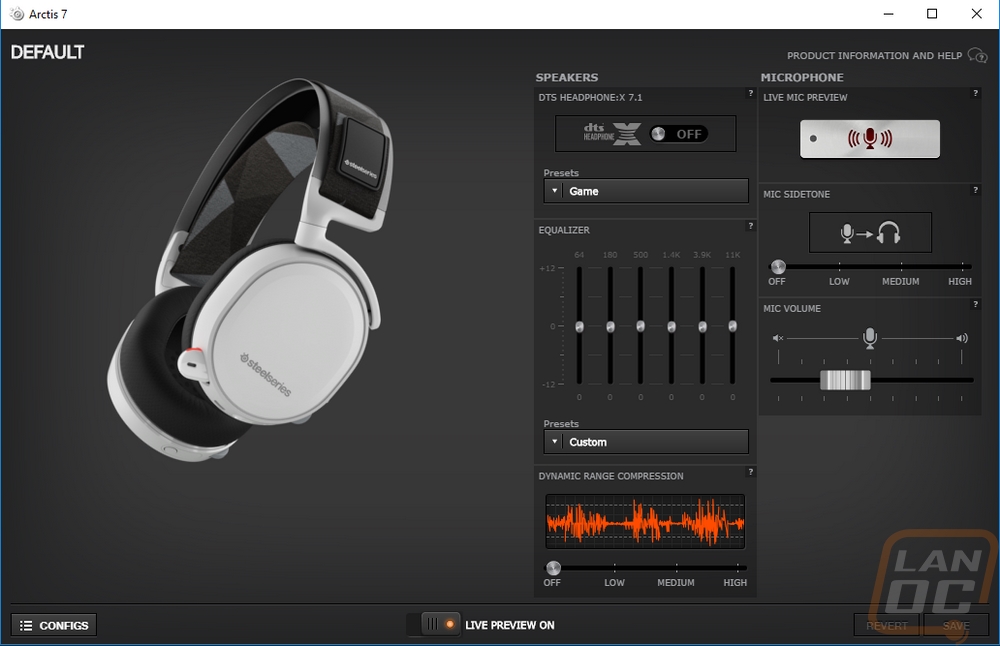