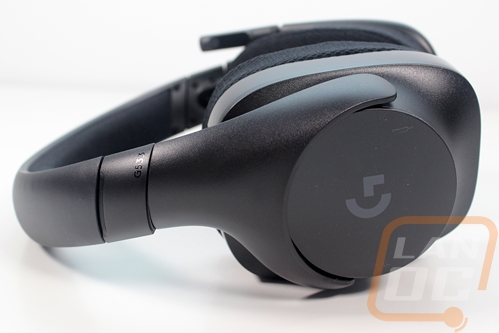 So how did the Logitech G533 end up turning out? While gaming headsets still haven’t caught up to the performance of standard headphones, the G533 did a good job in the key areas. The audio performance was right up there with the best gaming headphones, considering it is wireless I would consider that to be a big accomplishment. There did seem to be a limitation on the total volume available, I suspect this wouldn’t be an issue on a wired model. The microphones performance was good as well. They finally added a little flexibility to the microphone boom, I would like more but it was enough to reposition the microphone. Even with the microphone right up to my mouth, the tiny pop filter they packed in the hole did a good job as well.

Logitech changed the styling, but the squared off earcups ended up being just right to not touch my ears and to have enough room inside of the earcups to keep things comfortable. I did have a few complaints with the mesh material they used on the earpads, that was really the only think keeping the G533’s from being top tier in comfort. The wireless performance was on par with the competition, but the G533 stood out when it came to battery life. They advertised 15 hours and that would be great, but I experienced even more in my testing.

So the G533 ends up being a good wireless headset. It has a few faults, but I have yet to find that perfect solution. If you need to be wireless, this is the best sounding wireless gaming headset I’ve tested. I have to make that distinction because the Crossfade Wireless’s were spectacular on audio performance but didn’t have the microphone performance needed in a gaming headset, not to mention their cost. So are the G533’s the headset that I can finally switch over to? They have all of the performance I need, but I did still find myself forgetting to plug them in. I’m going to keep looking for something like the H-Wireless but with G533 performance that will let me swap out batteries or something that charges when docked. I’m going to need stupid proof to remember to keep mine charged. That said, I think most other people will love the G533’s. For the price the G533’s are in line with the Arctis 7 and the ManO’War headsets from their direct competition. There are other cheaper options from Corsair for example and even Logitech has a few older models that sell for less now in case the launch pricing is too much. 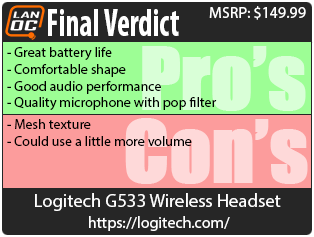