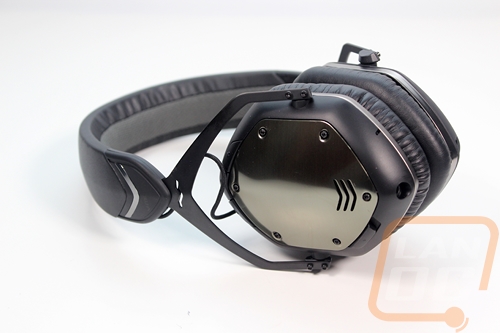 Before getting into the Crossfade Wireless itself, I wanted to first start off by taking a look at the awesome carrying case that it comes in. Carrying cases aren’t completely new to V-Moda as my wired Crossfades also have a case, but this one is a little different and frankly being wireless the case is more likely to be needed. From the outside of the case, we can see that it is designed ti fit perfectly around the headset. We can see the headband and the earcups in the shape. The case is hard but feels like a fake leather material. On one end the V-Moda logo is embroidered then the zipper is covered with a rubber seal to help prevent water from getting in. There is also a loop to attach the included carabiner to hook the carrying case to a bag when traveling. 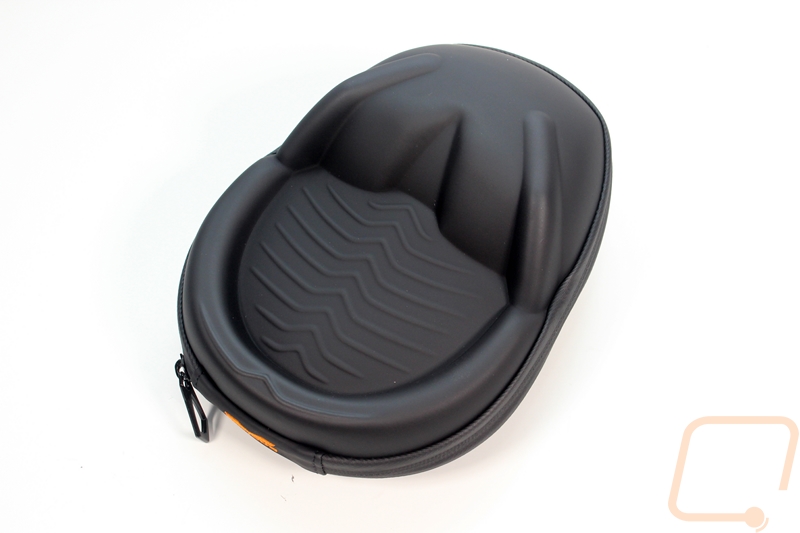 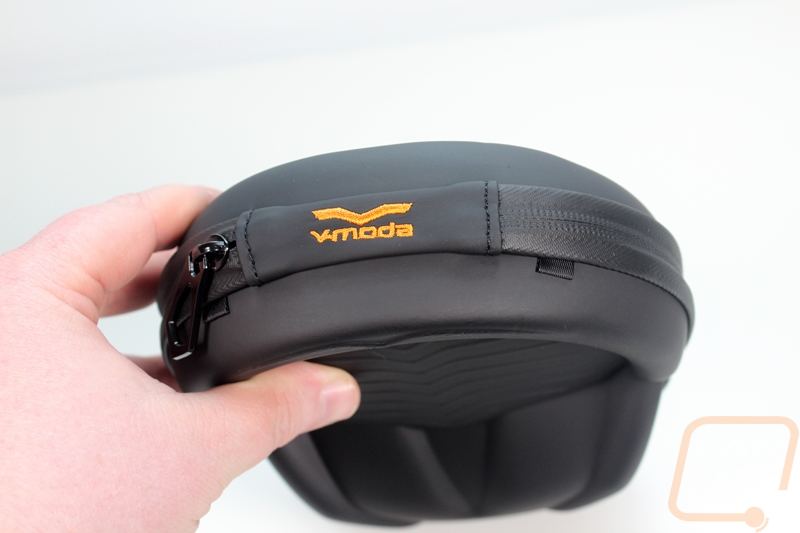 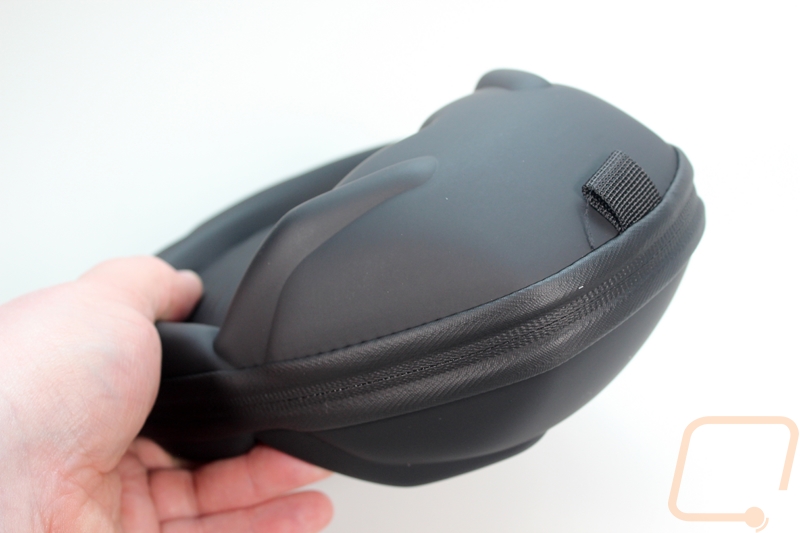 When we open it up, on the right is the headset and on the left in the middle is a small accessory pod that fits inside the shape of the headband. The accessory pod is covered in Velcro on one side to keep it in place inside the case and on the other side it has elastic straps all over it to hold whatever accessories you want to keep in your carrying case. 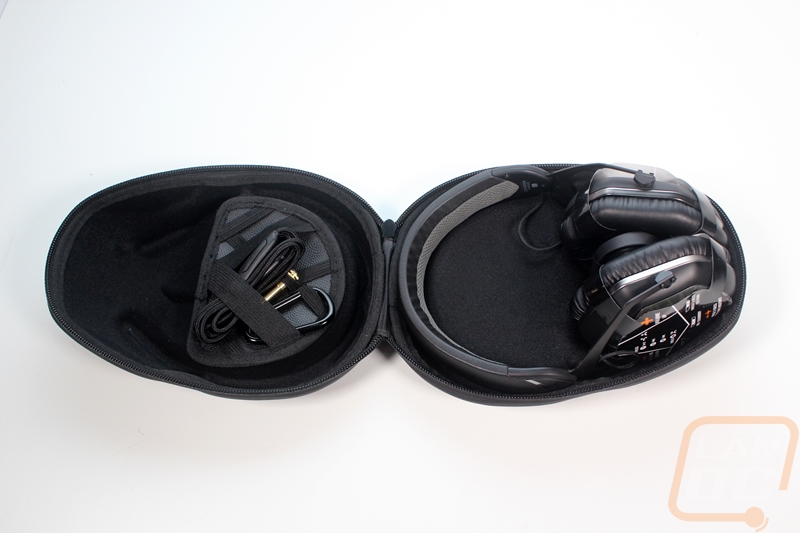 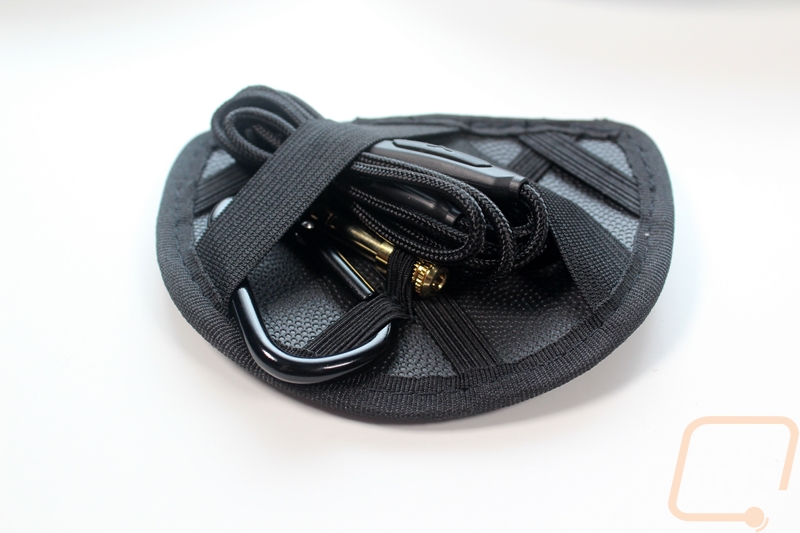 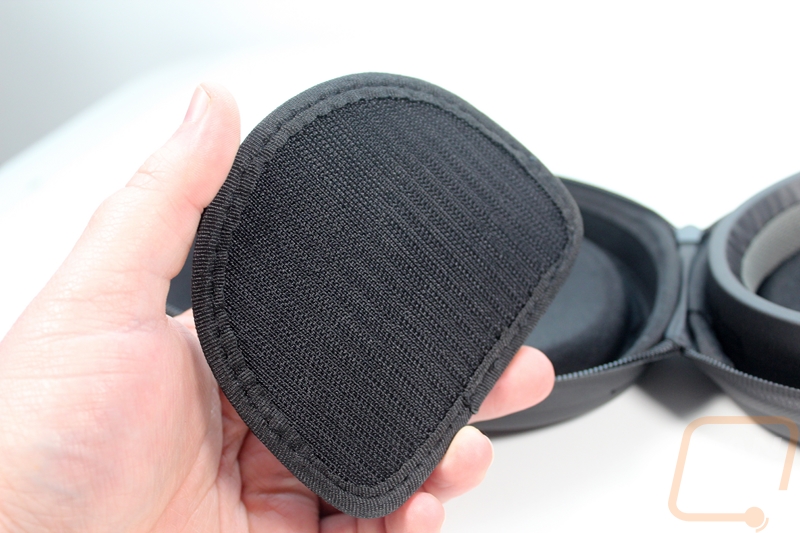 The Crossfade Wireless comes with the carabiner I mentioned earlier, a 3.5mm stereo jack to 1/4 “ jack, a USB charging cable, and a 3.5mm wired plug. The 3.5mm cable is used when you don’t want to run wirelessly, turning the Crossfade Wireless into a standard headset. It has a sleeved cable with an inline control for phones. On the ends, the connections have thin but really well-built connections with one having a 45-degree angle and the other being straight. The USB charging cable is normal USB to micro USB like a lot of phones, so charging the Crossfade Wireless should be easy. The cable though has a flat rubber tangle free design. The connectors have the V-Moda logo molded into them and they are extra long compared to standard USB connections. 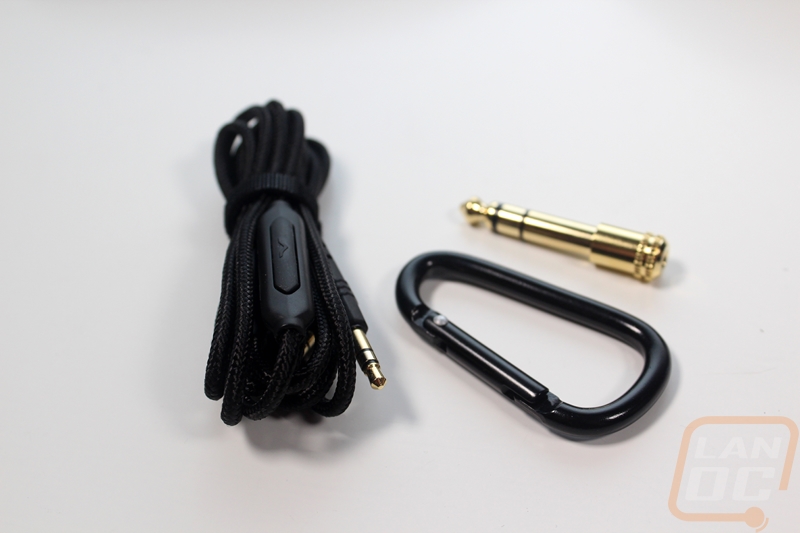 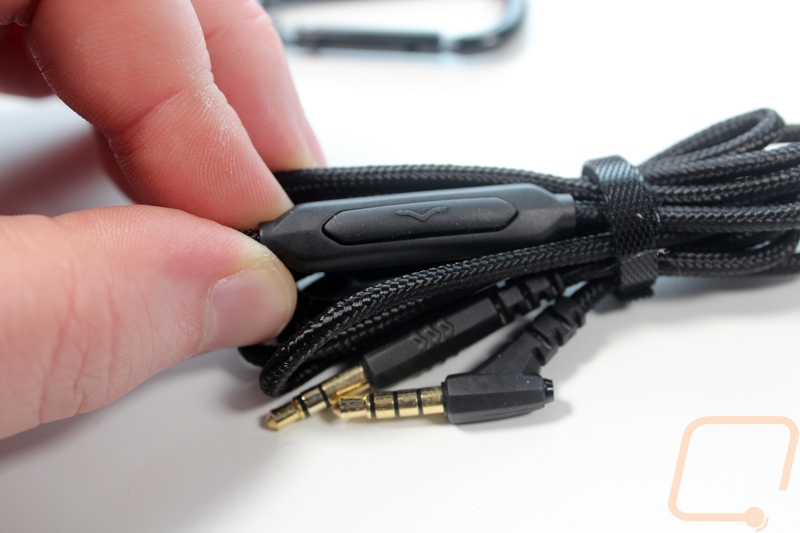 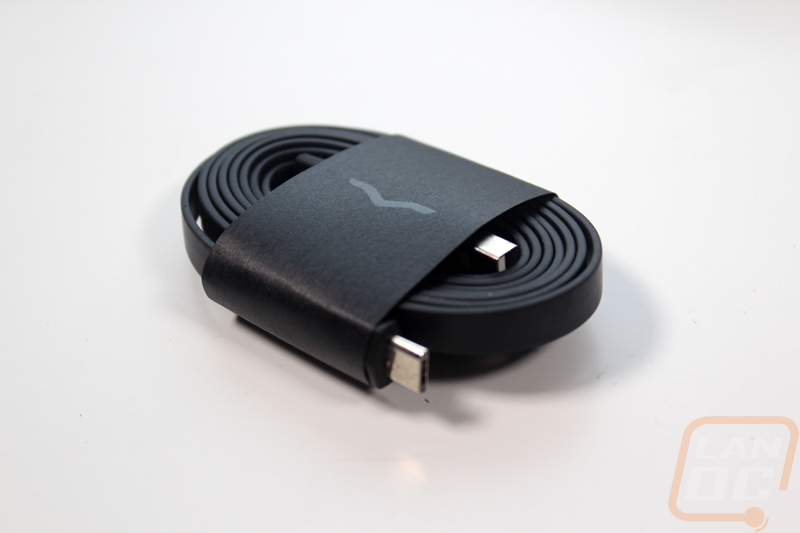 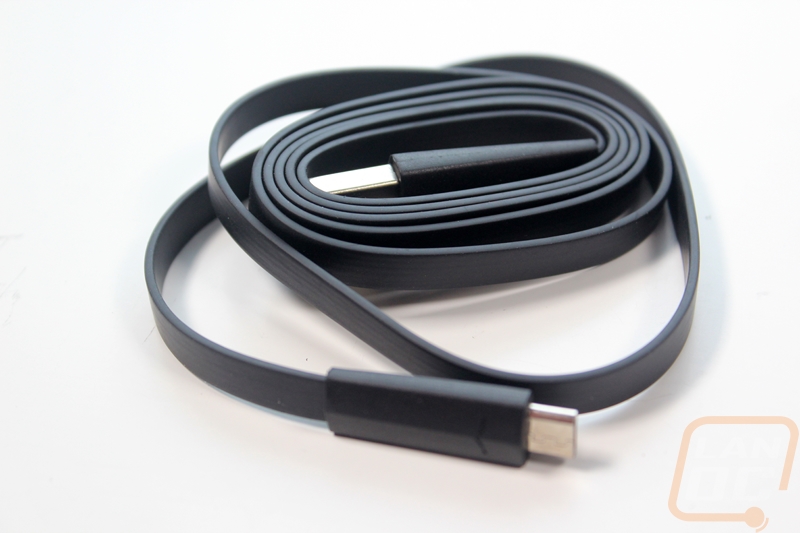 The headset comes with paper covering the outside of each earcup along with plastic on each of the aluminum panels. But the paper on the control panel side is really useful as a quick guide to the controls. They show you how to do the volume, turning the headset on and off, how the middle button starts and stops music and calls, and how to use the power button to clear past Bluetooth devices and to pair. 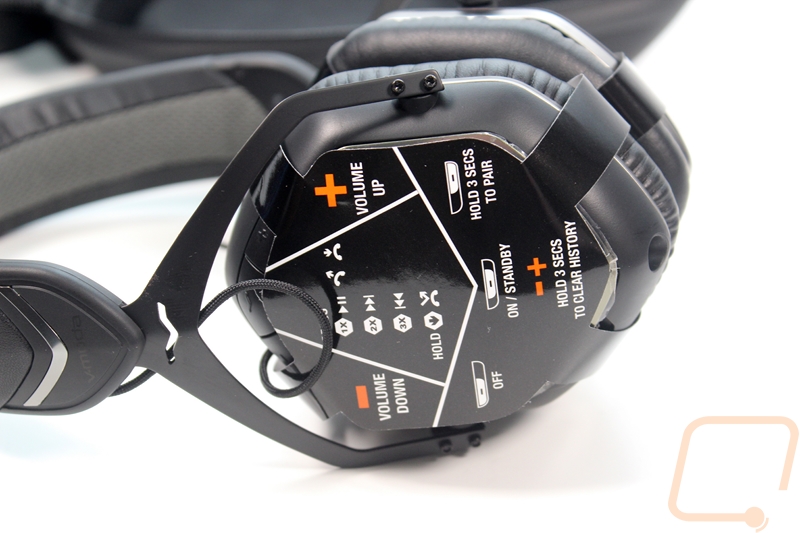 Okay, so we are finally actually checking out the V-Moda Crossfade Wireless and my first impressions were just how great they look. They are almost exactly the same as the wired Crossfade 100’s meaning they have a mostly metal design with the aluminum ear cup panels and the metal frame that holds the earcups. The Wireless is different in the earcup frames, though, they have dropped the folding frame for a solid design. V-Moda never skimps out on the details, even the wires coming from the earcups to run into the headband are sleeved in a nice black sleeving. Because it is hard to judge in a photo, I should also point out that the Crossfade Wireless is larger than any on-ear headphones but smaller than headphones that go around the ear. It is a very unique size. Officially V-Mode considers them over the ear, though. 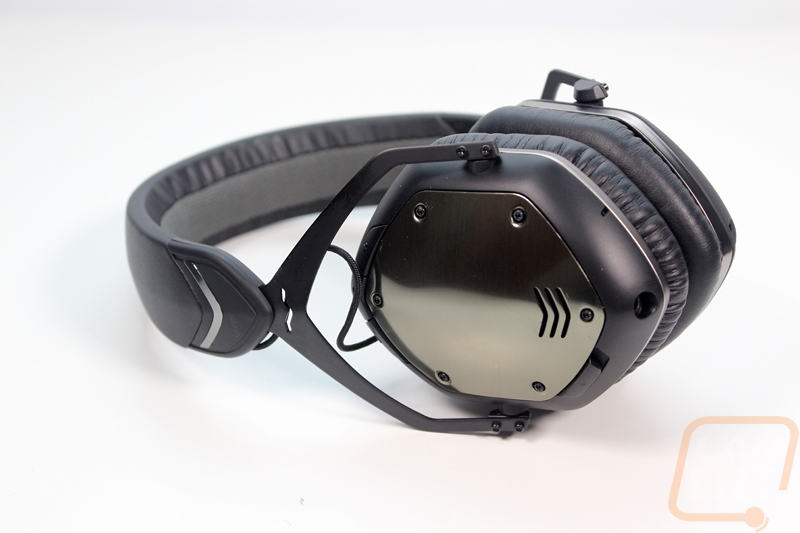 The earcups on the Crossfade Wireless have aluminum panels that can be removed and replaced with a wide variety of options provided by V-Moda. They have a series of different colors of the anodized aluminum like the stock panel and on my wired Crossfades, I have an orange set. You can have them laser etch one with anything you want and they also sell different 3d printed panels as well. The gunmetal of the stock panels look great though. Also here on the outside of the earcups for the Wireless model they have added a few buttons. On the right cup, up near the top you have two volume control buttons and the middle handles play/pause or speakerphone functions. The right earcup is also where the power switch is, but it is down at the bottom. There is also a small hole for the built-in microphone and then at the bottom is the 3.5mm jack to switch back to wired with the included cable. 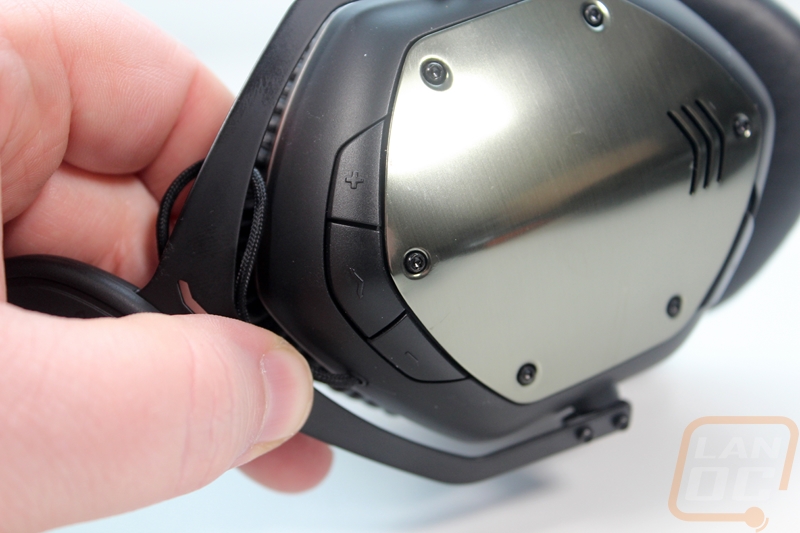 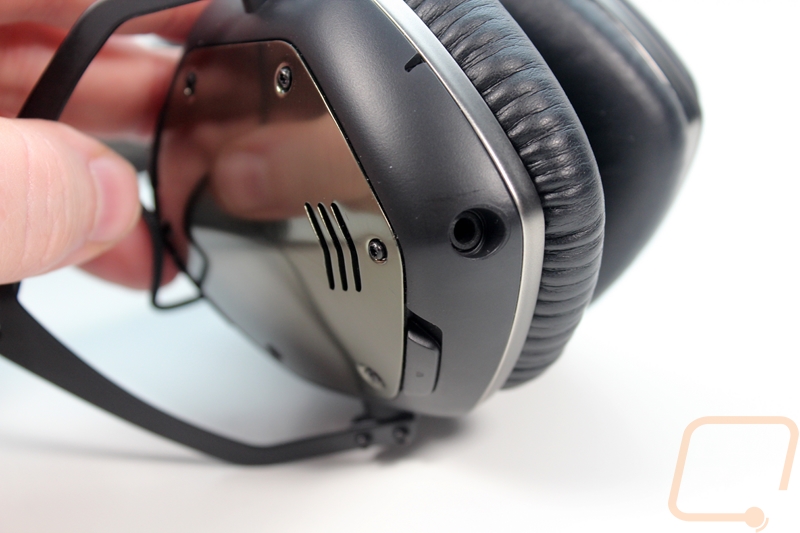 The left cup on the other hand just has the one connection. The Micro USB plug to recharge the batteries. 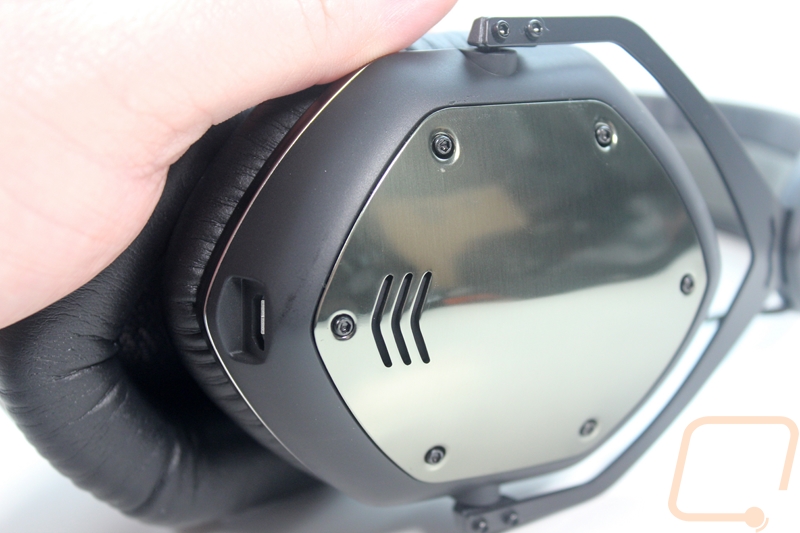 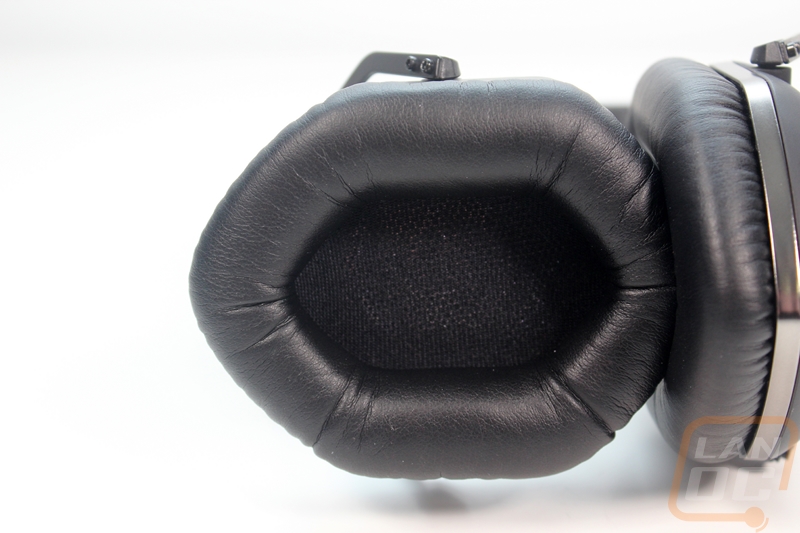 For the headband, V-Moda ran the steel straps from the earcup brackets all the way around to give the headband strength and to help keep its shape. From there they widened it out to about an inch and a half and wrapped it in what they call vegan leather (aka really nice fake leather). The headband has the V-Moda logo on the top as the main branding on the headphones. Then the underside has a small amount of padding and a mesh fabric to help with airflow. 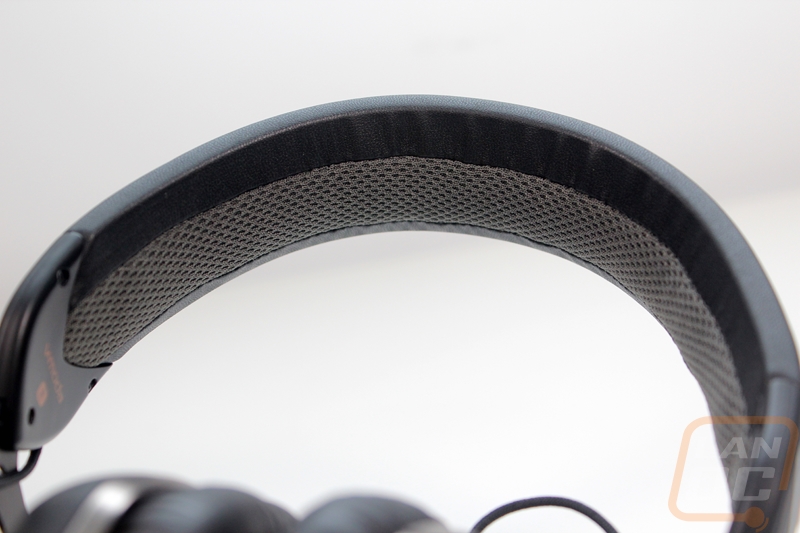 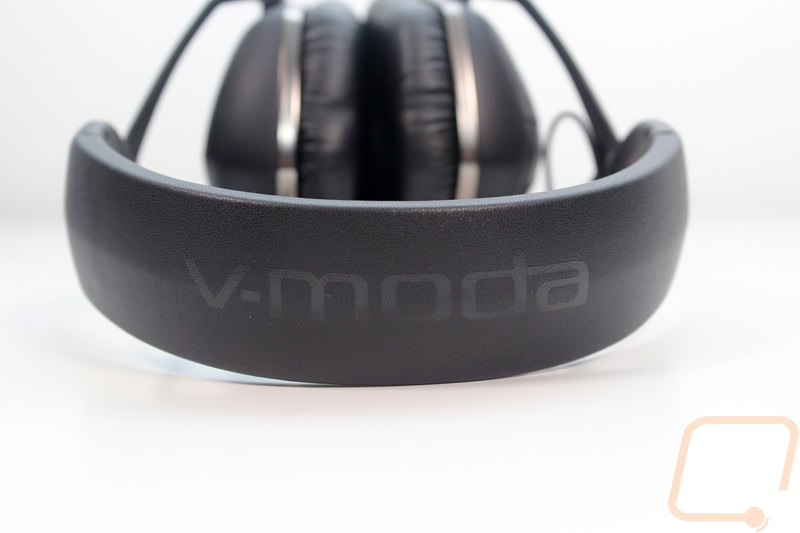 The Boom microphone accessory included with our sample is a lot like the standard cord that the Crossfade Wireless comes with. It has the same high-quality sleeving, but they dropped the inline phone controls for a PC like volume control. It has a clip on it, a microphone mute on one side and a volume spinner on the other. The cable has a 3.5mm jack on both ends for phone and console use and for PC use they include a 3.5mm to dual 3.5mm adapter. For the microphone, the Boompro mic has a Y just under the headphone connection. This has a very flexible portion that is metal in construction. Then at the end is a diamond shaped microphone. The mic is Omni-Directional with a sensitivity of -58±3dB. This is actually not as good as the built in mic for the Crossfade Wireless, but I suspect its range is better but V-Moda doesn’t have that included in their specifications. 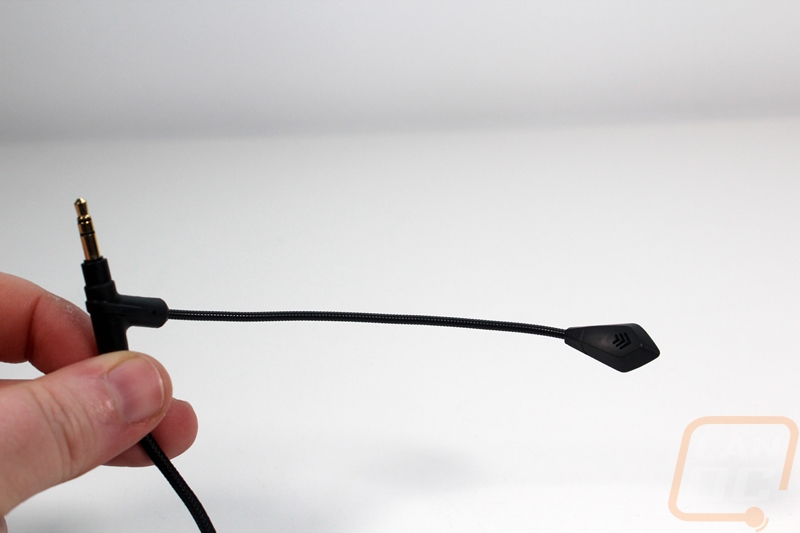 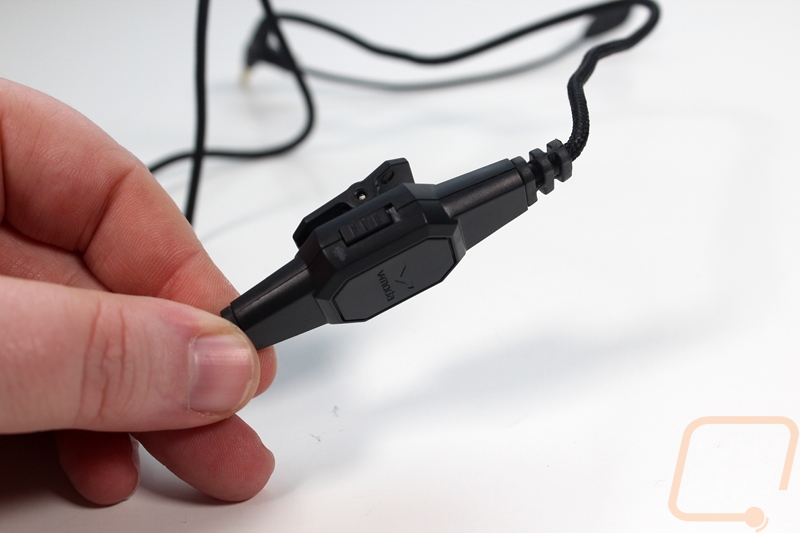 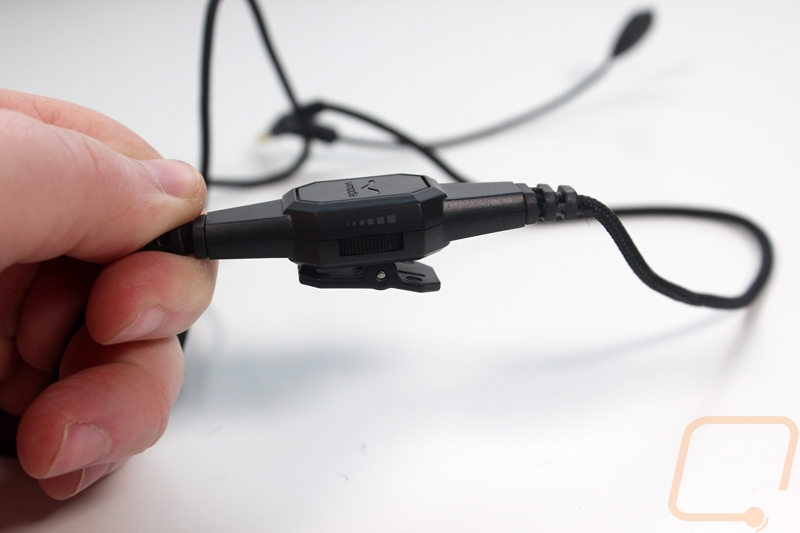 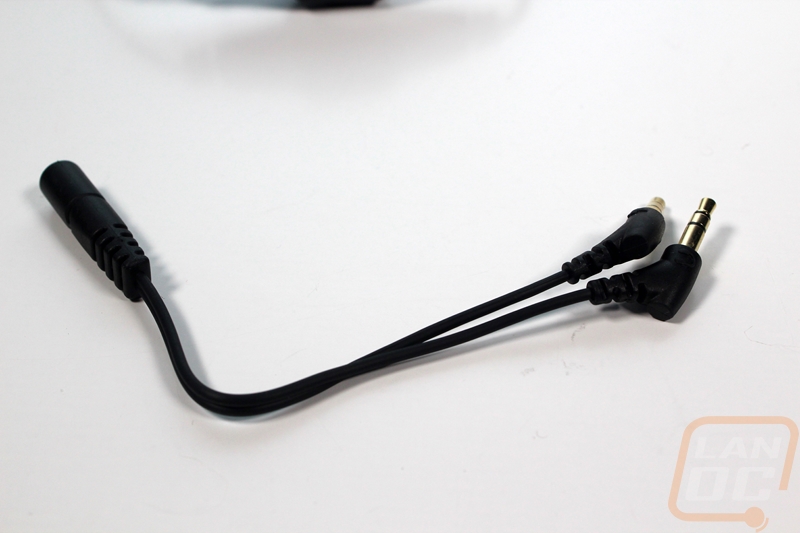 The XL Memory Cushions that V-Moda included with our sample are noticeably different than the stock cushions with flat edges, extra thickness, larger openings, and the holes inside the padding. Getting the stock cushions off the headset is a bit of a trick, you have to slide four fingers into the earcup up under the pad and pull firmly. There are tiny clips all around the headset that hold the pads in. Once you remove the stock pads, the XL’s are easy to install, you just have to slide under a few clips then work your way around the cup to latch them all. 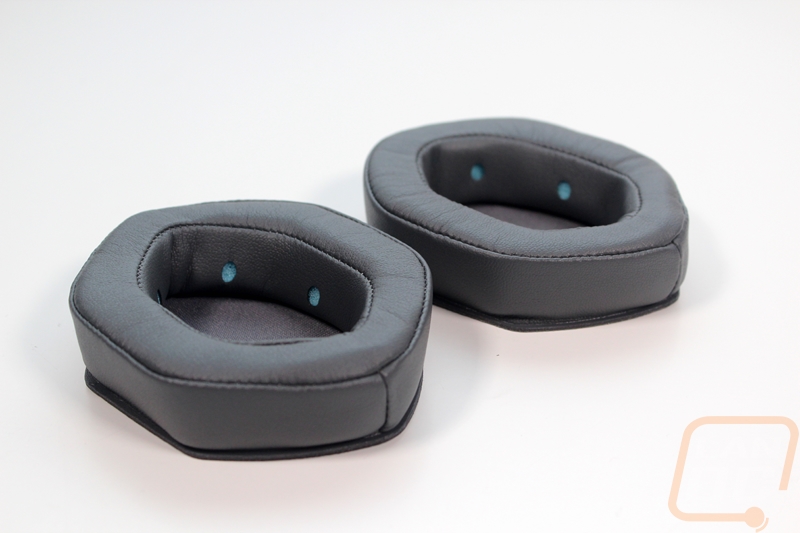 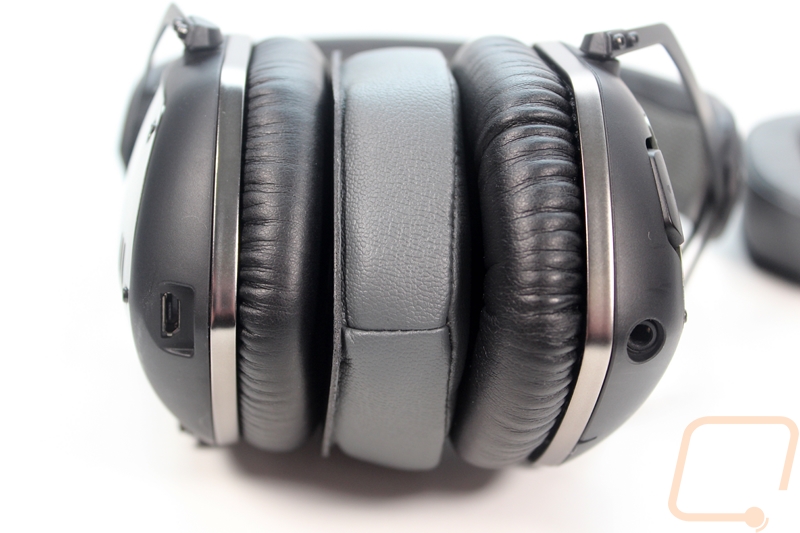