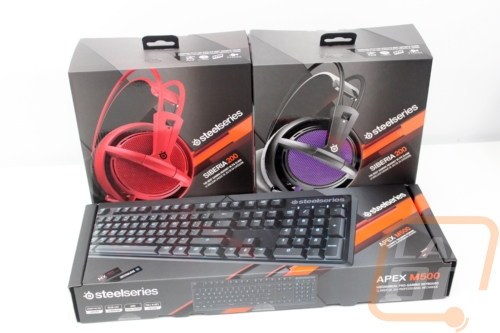 When SteelSeries moved from the Siberia v2 to the Siberia v3 they kept the look very close to the v2 but when you took a closer look they had changed the mounting for the suspension headband, dropped the metal mesh in the earcups in favor of plastic with holes in it, made the earcups a little larger, and they dropped all of the color options and focused on an LED model with RGB lighting. While the Siberia v3’s are still a good headset, in my original review I couldn’t help but feel like they took a few steps forward and a few back as well. What I loved about the Siberia v2’s in addition to their good audio quality, good price, and comfort were the color options you could get them in and their overall build quality. I’ve still got an orange Siberia v2 that I have thrown around, taken to LANs, and just plan abused. I actually tossed them across the staff area at one of our events onto the hard floor to prove just how much they could handle to someone. So when the v3’s dropped some of the things that added to the v2’s build quality as well as the color options I think there was some backlash.

So with the introduction of the Siberia 200’s it was clear immediately that this was just SteelSeries bringing back the Siberia v2’s. From the outside there isn’t anything on the headset that looks different at all with the exception of the new color options. They did make a few changes to the cord, but I will get to that later. This isn’t a bad thing though, the Siberia v2 ruled over all other gaming headsets for years. For color options the new Siberia 200 has the basic black and white models as well as options in black and gold, black and purple, black and yellow, red and black, and a weird model with white, gold, yellow, and blue. For my testing we wanted to get in the red or the purple models because they look amazing and should look good on our white backgrounds. Well SteelSeries went ahead and sent both for us to pick from. 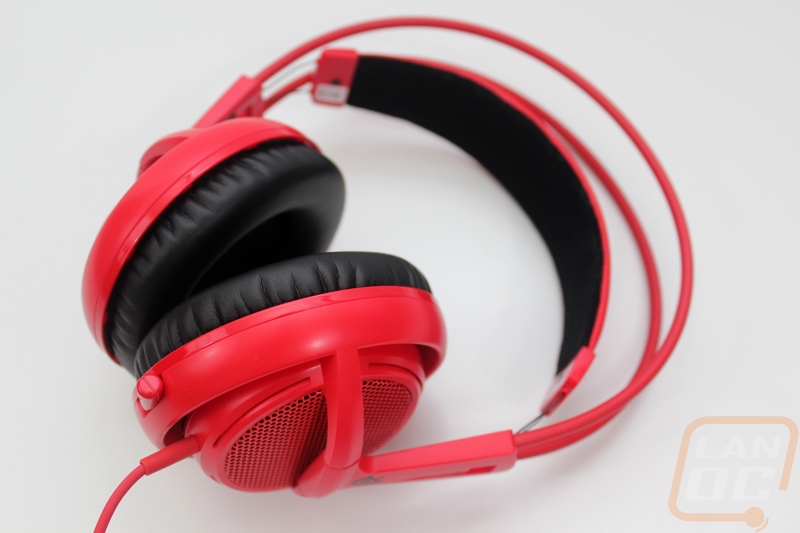 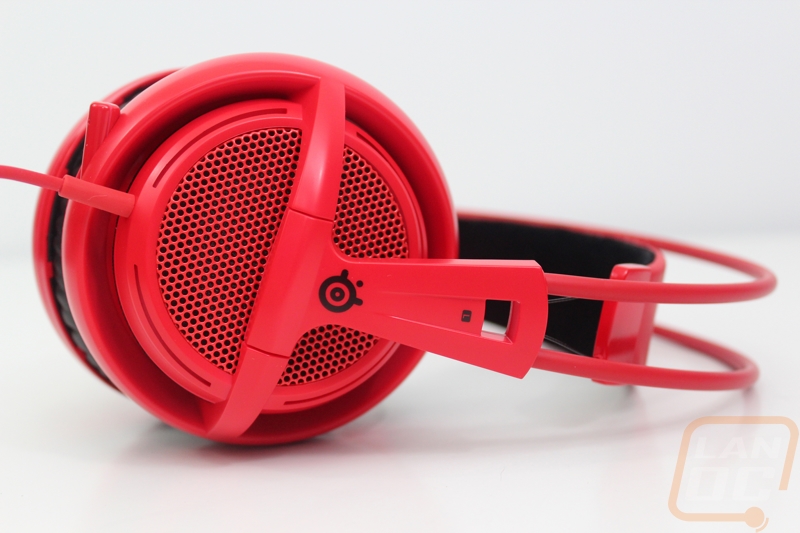 So the earcups have their metal mesh back and it still looks much better than the plastic with holes in my opinion. The two suspension bars connect to each earcup with a plastic piece that has your L or R indicators and a SteelSeries logo on it. For additional airflow the cups have a second vent that goes all the way around it for what is almost an earcup inside of an earcup look. 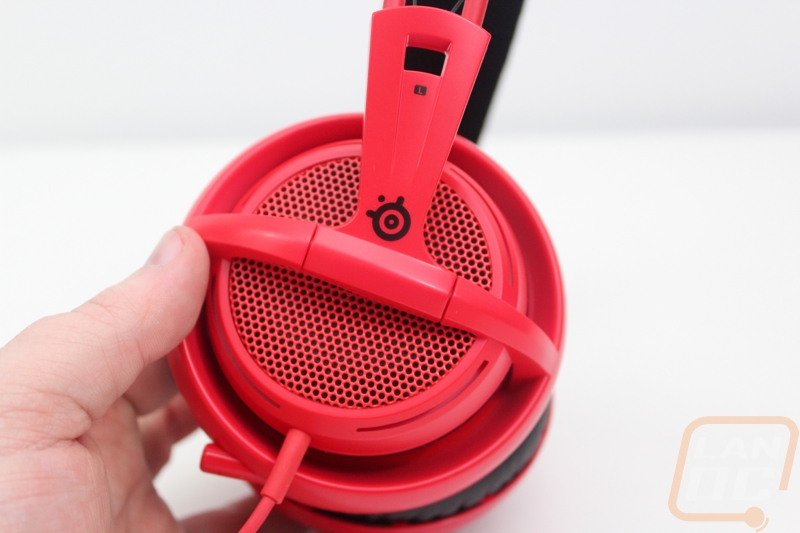 Inside the earcups are 50mm Neodymium Drivers, the same drivers that have been a staple in all of the Siberia headsets. They are covered in a black fabric that goes god with the fake leather on the earpads. The earpads have the same memory foam inside that was introduces with the Siberia v2’s. 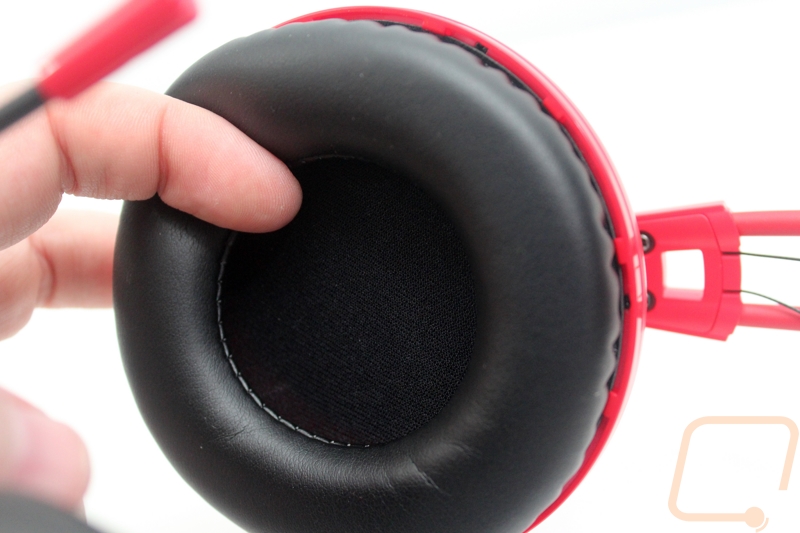 The headband is a suspension design and like I mentioned it uses two steel bars curved to go up over the top. The headband is held with thin steel wire and the headband is very thin unlike the HyperX Revolver that I recently covered. This design doesn’t really have padding, instead the headband is think enough to flex and fit to your head. Up on top of the band it has a fake leather finish in red for our red headset with a black SteelSeries logo across the top. Inside is a black felt finish. 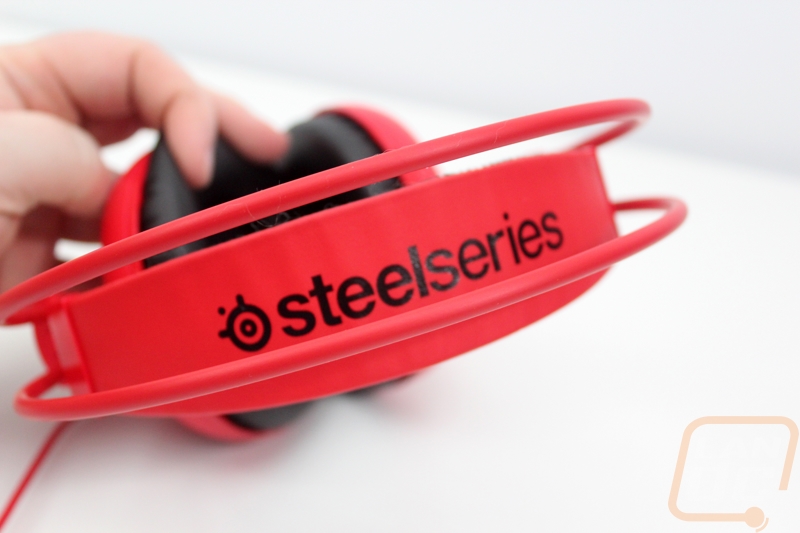 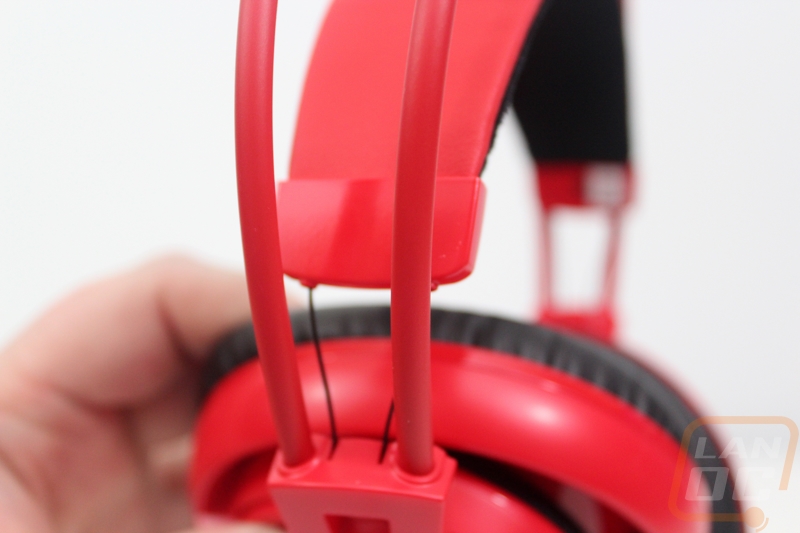 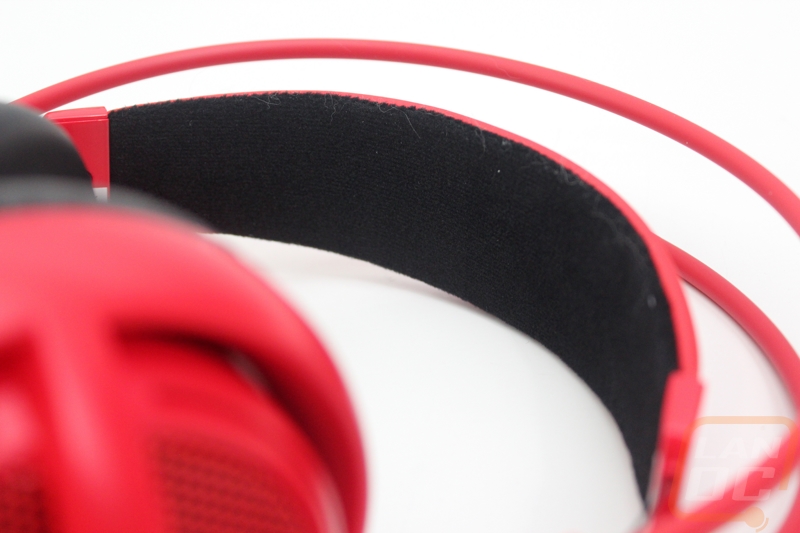 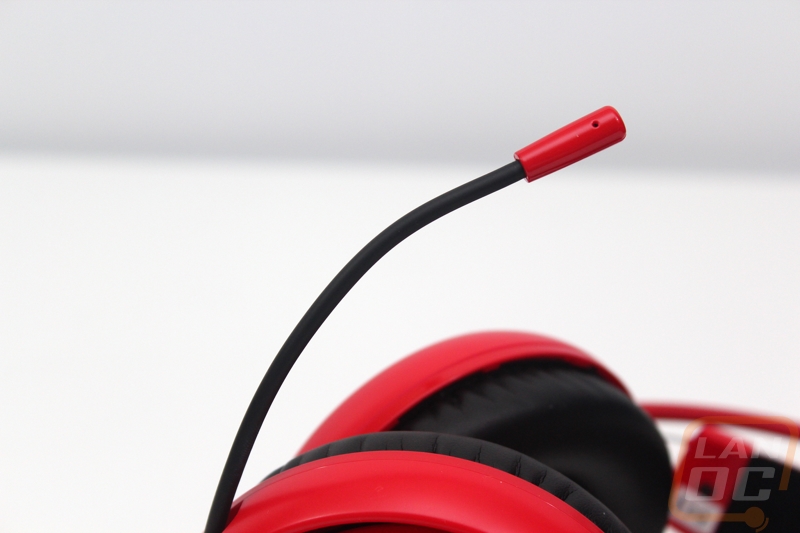 I mentioned earlier that the cord on the Siberia 200 is a little different than the old v2 design. The Siberia v2 had a short cord and then came with a long extension cord, the new design drops the dual cord design all together. The overall cord length is 5 feet long; this is a few feet shorter than the v2 with its extension cable but dropping the extension cable lower the risk of issues. The new cord does still have the Siberia v2’s microphone and audio controller in line though where the V3/350 dropped it. This gets you an easy to reach microphone mute for when you are on a skype call or if you are concerned anyone might be able to hear you. The in line volume control makes controlling the volume easier as well, especially on mobile devices and consoles. 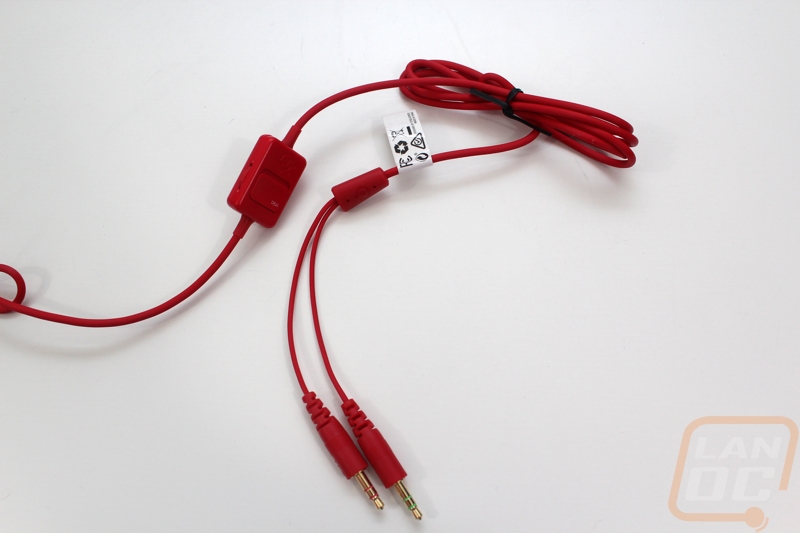 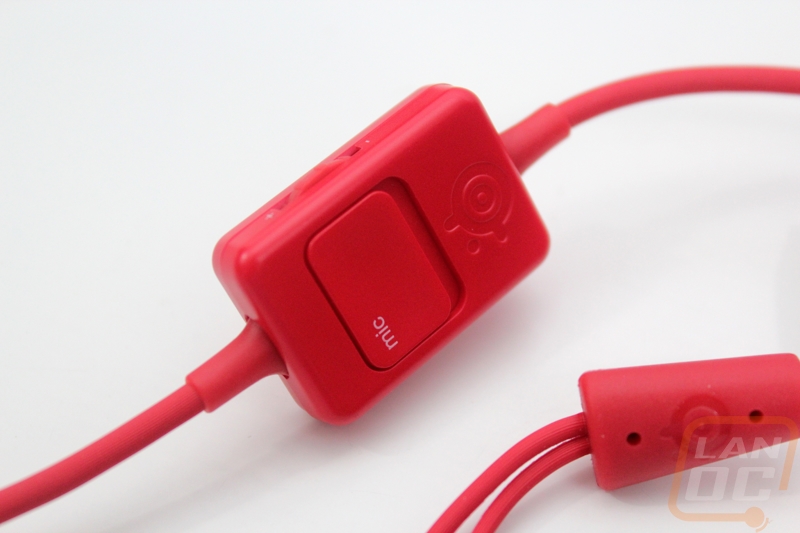 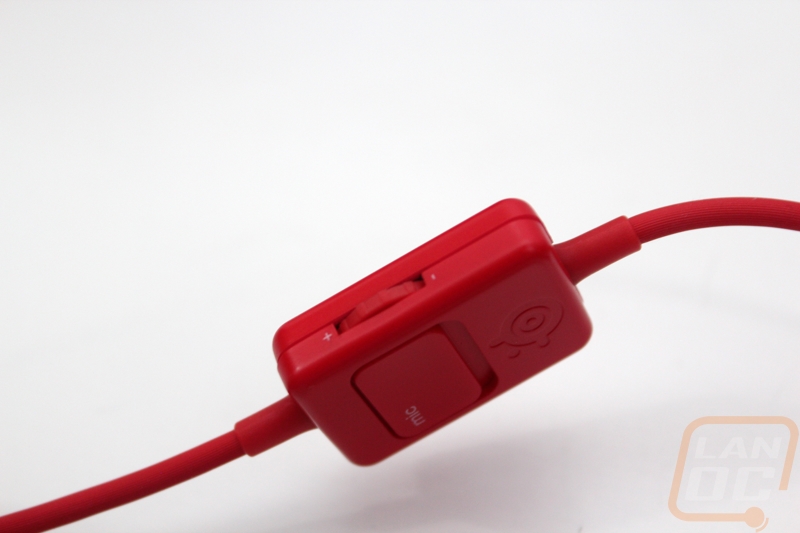 I used the Red with black trim model for most of our pictures but I couldn’t go without showing off the black with purple trim model that SteelSeries sent over. In fact, I actually like this more than the red. All of the plastic is black and they slipped the purple in on the metal mesh on the earcups as well as the entire length of the cord. They also used a good looking silver on the earcups and the top of the headband. 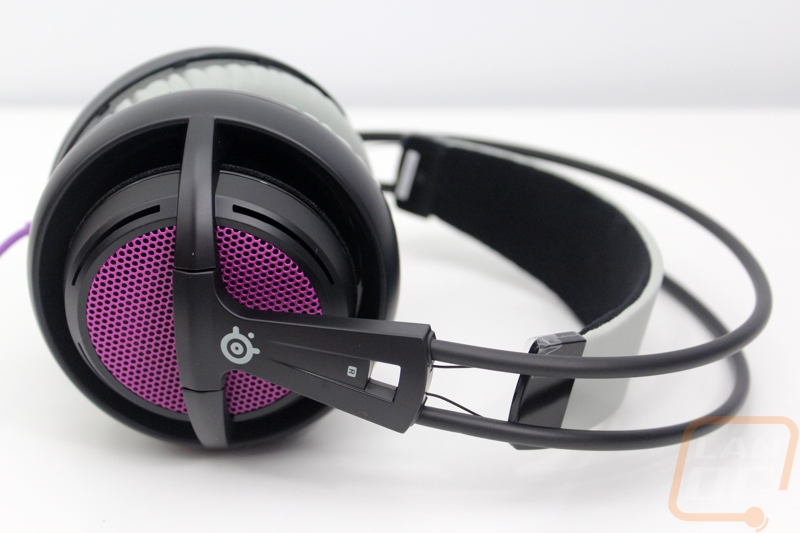 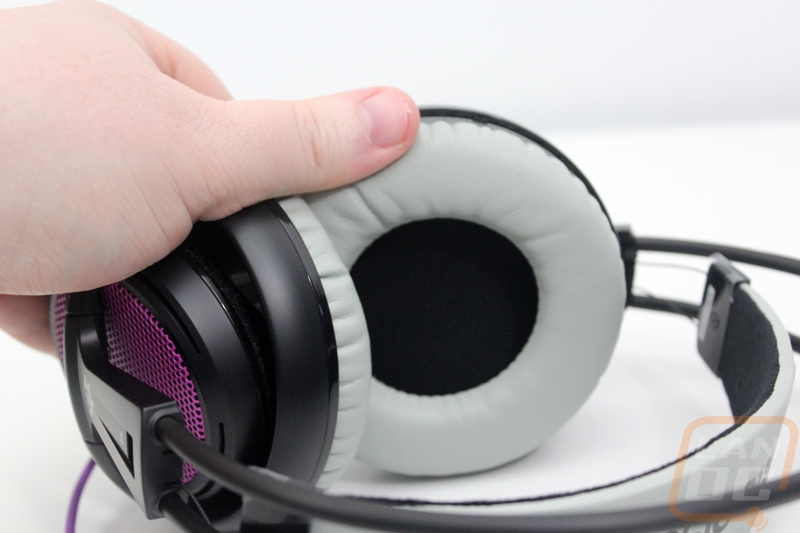 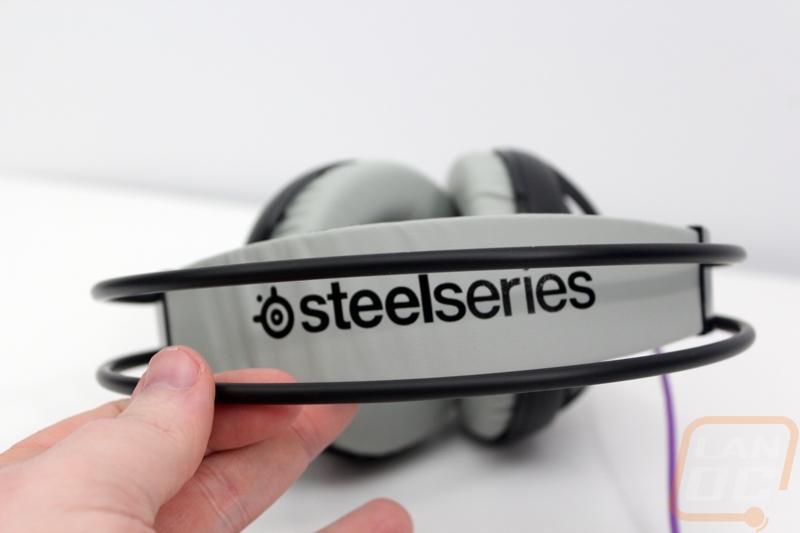 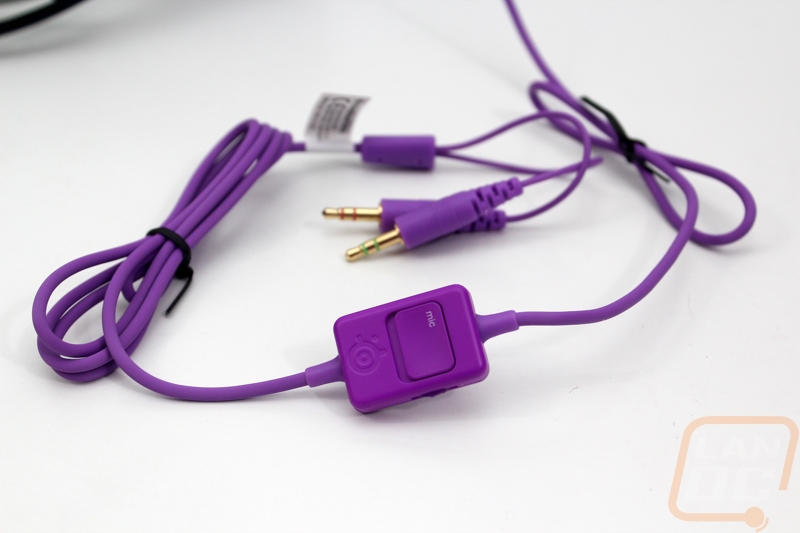 We have 572 guests and no members online