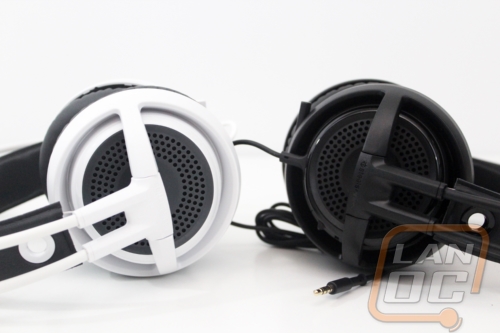 While SteelSeries clearly made a few big changes with the Siberia V3, you can rest easy knowing that they kept the suspension headband design that the Siberia headsets are known for. Actually without looking in too much detail most people won’t really even spot the differences with the new headset. The overall look is the same thankfully. Let’s dig in a little closer though to check out what they did change. 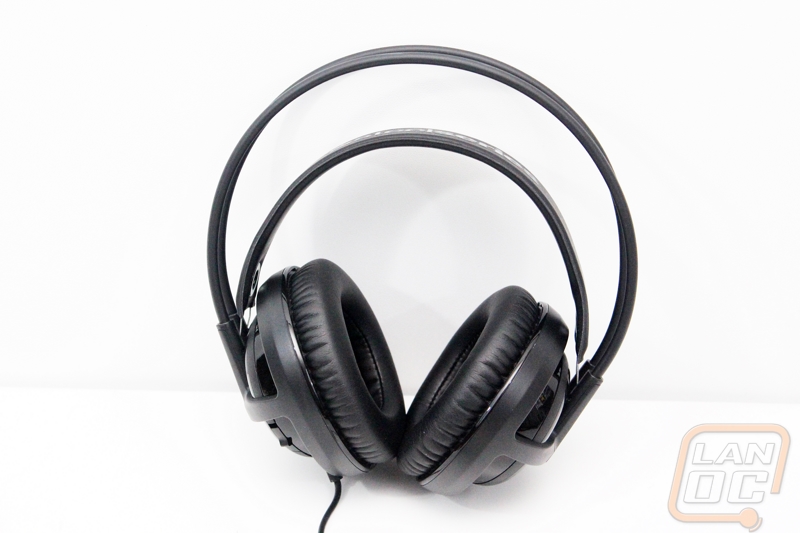 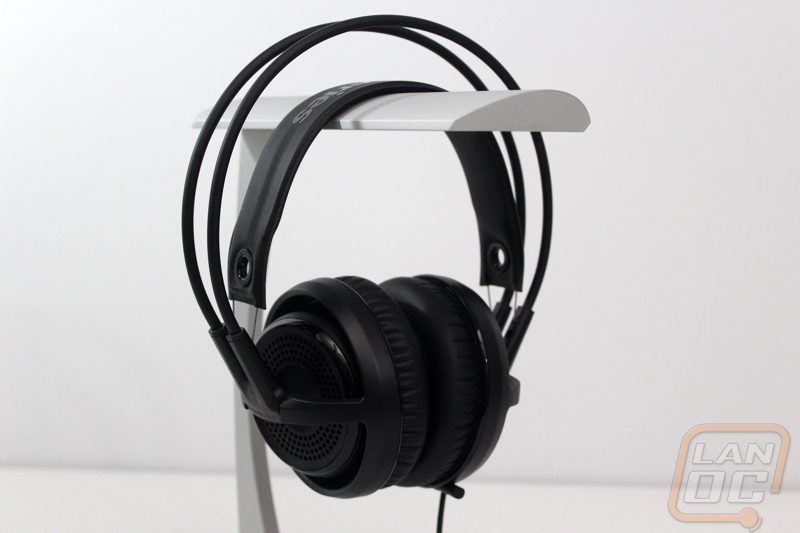 So a majority of the changes going to the V3’s happened right here in the earcups. SteelSeries stayed with the same 50mm drivers but to improve on the sound they made the internal capacity of the earcups a little larger. This should improve bass a little, something that the V2’s were a little weak on. While they stuck with the two metal rods for the top suspension, where the rods mount to the earcups did change a little. Before the design was a little thicker, now there isn’t any meat between the rods. My initial examination of the headset showed a little more flexibility in those same rods, I’m sure this had a little to do with it. The rest of the mount is the same, with two arms reaching around the cups and attaching on the outside. SteelSeries also changed the ventilation area as well. This I wasn’t a fan of, the old design has a metal mesh covering the earcup, the new design is all plastic with holes drilled into it. I really think losing the metal lowers the overall quality perception, as for actual quality, it’s not like the mesh was making the headset more durable. 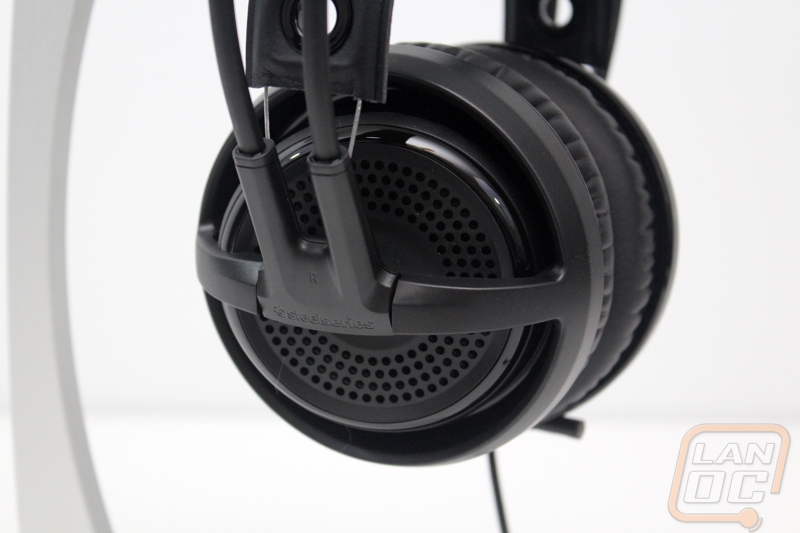 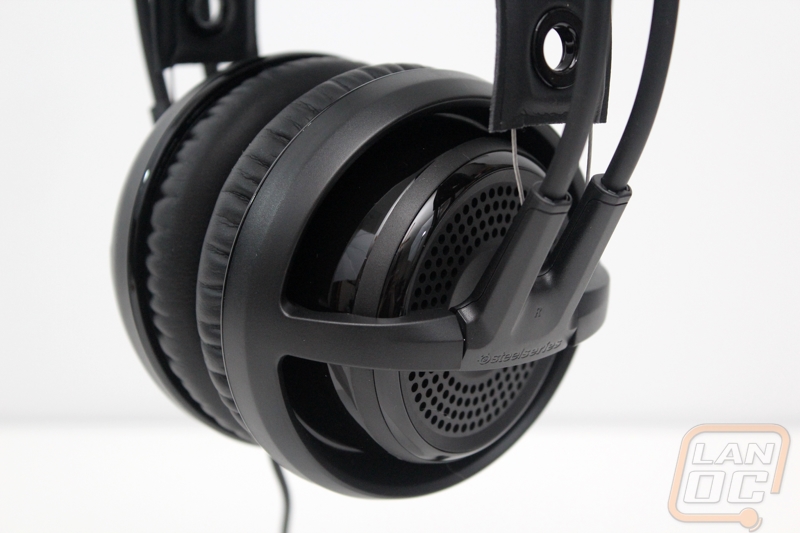 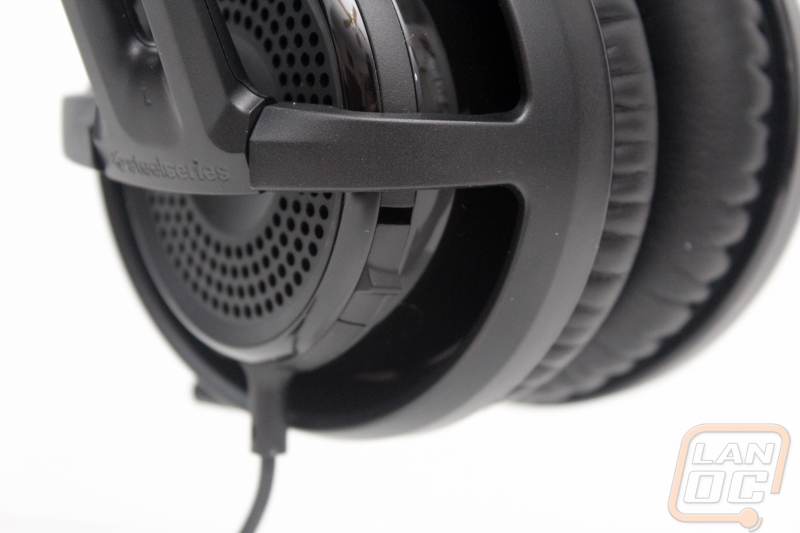 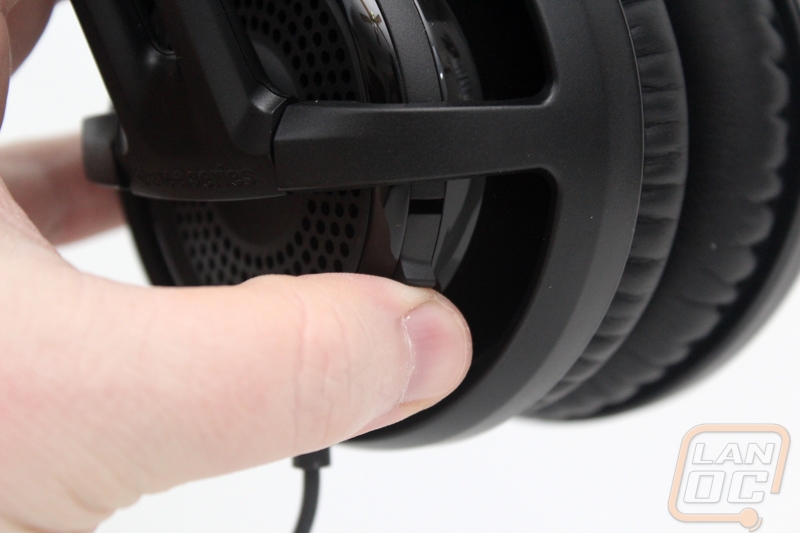 SteelSeries kept the suspension top band that makes a Siberia headset a Siberia headset. For the black model we have a black band with leather on both the top and bottom. The SteelSeries logo is across the top as well but in this case it is gloss black on black so it’s subtle. The top supports are still metal like before with a plastic coating over top. They do feel a little more flexible than the V2, I’m not sure if they will be a pro or a con until I get into the testing though. 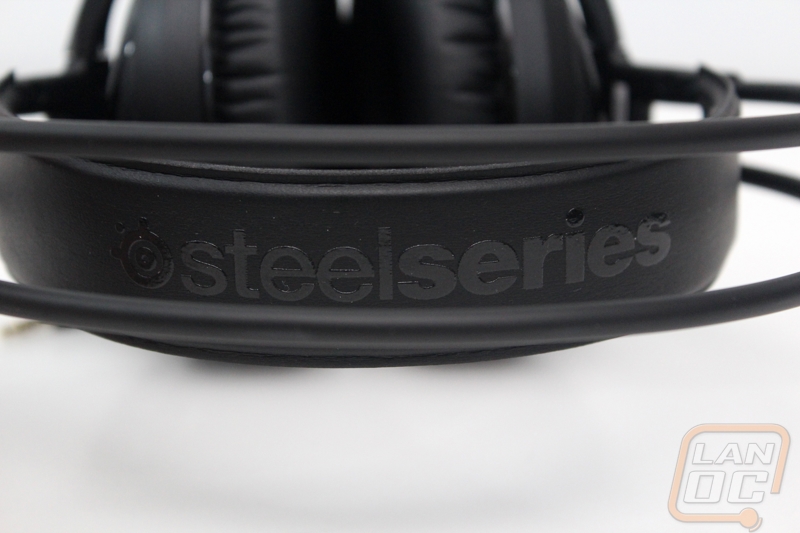 For earcup padding, I’m not seeing any differences between this and the Siberia V2 visually. I will be able to compare a little more farther down the page when I compare them directly. SteelSeries is saying they swapped out the foam internally for sound absorbing memory foam this time around to improve comfort and also to cut down on external noise. I’m always happy about additional comfort but I’m a little unsure about the need to cut down external noise, this was one of the benefits of the Siberia’s open design. 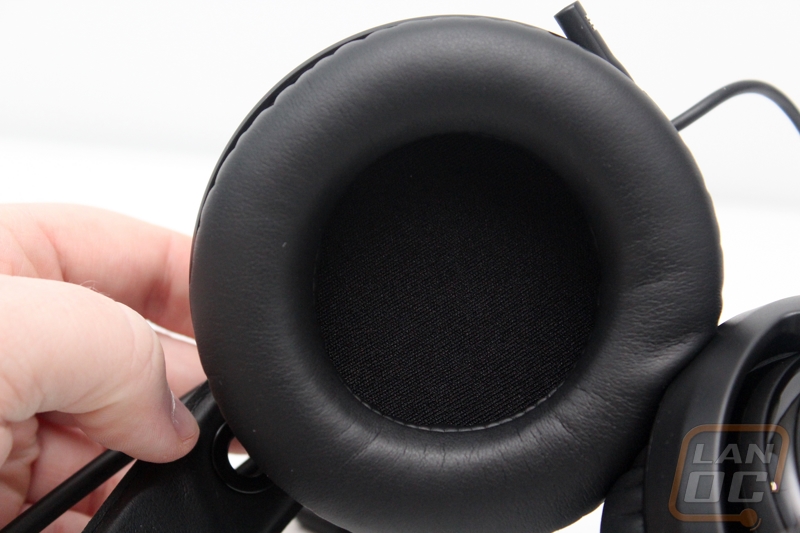 SteelSeries changed things up with the cord as well. Just like the V2 and even the original the Siberia V3 has a base cord as well as an extension cord. This time around, the base cord is a single cord with a 4 connection TRRS connection. This basically means it transmits stereo audio as well as the microphone. This is what you use for cell phones and on some ultrabooks. That means you can use the Siberia V3 on your phone or ultrabook without any adapters. For hooking up to your PC they expect you to need a little more cord, so the adapter extends the length of the cord and also splits up that signal into headphone and microphone connections like your PC accepts. This is actually a cool design although I will be honest it took me a little while to adjust. Sometimes I like to skip using the cord extender at LANs to save room, you won’t be able to do that. More importantly, this design does mean if you lose the extension cord you are going to have to get an additional adapter along with the cord extender. 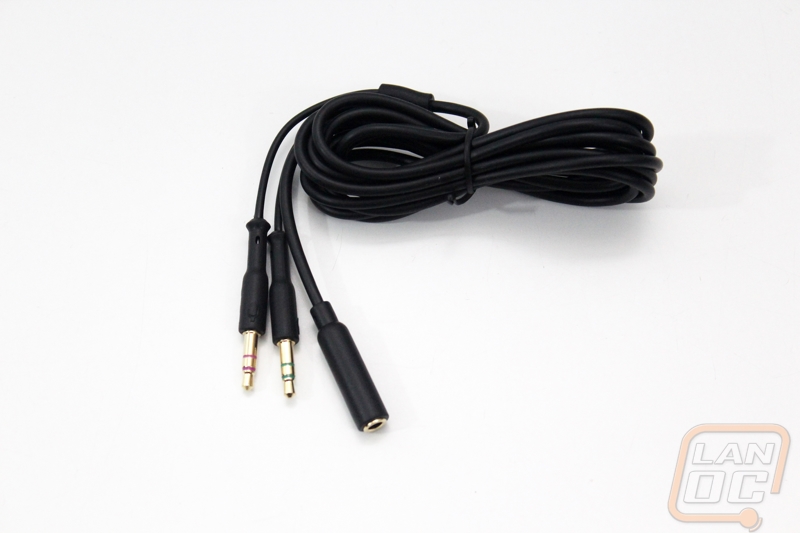 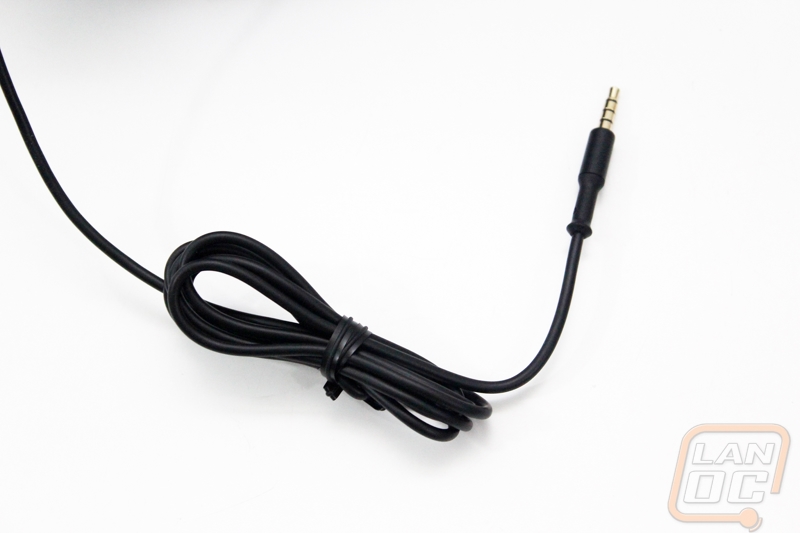 While I haven’t personally had issues with the microphone on any of our Siberia V2’s, I have heard that they do tend to be a point of failure in some cases. The Siberia V3 still has the microphone that pulls in and out like before but from what I hear the design has changed to try to prevent future issues. 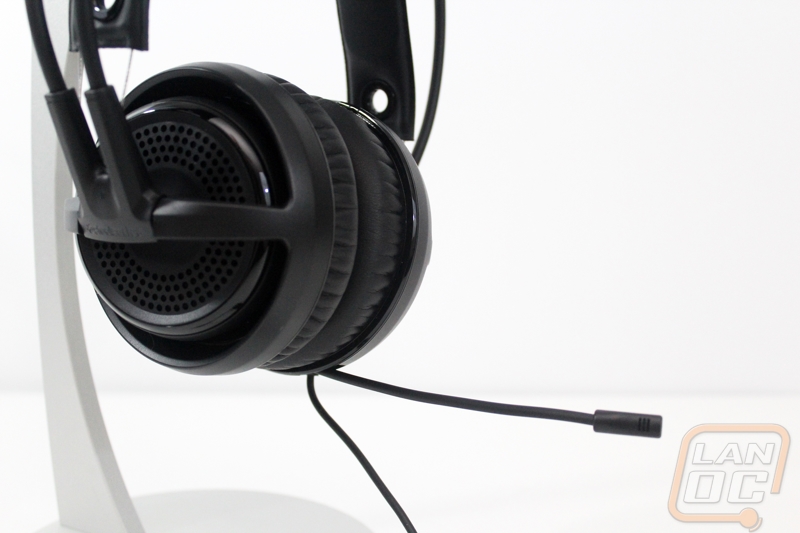 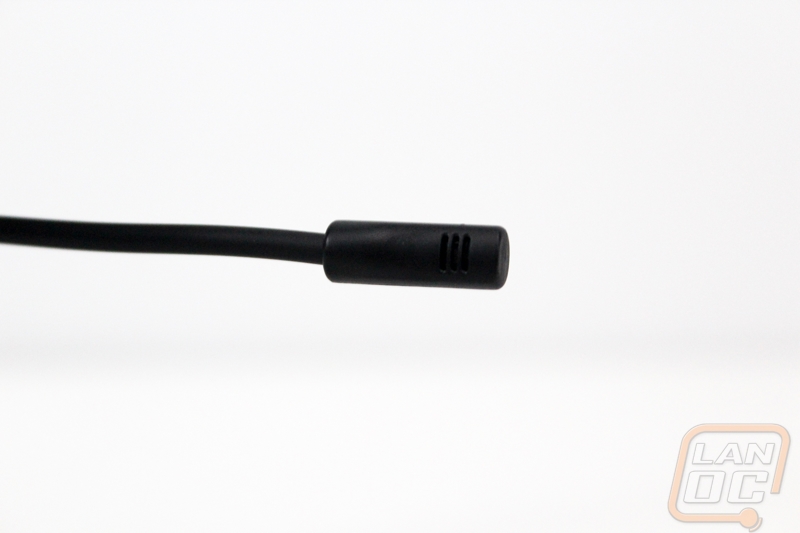 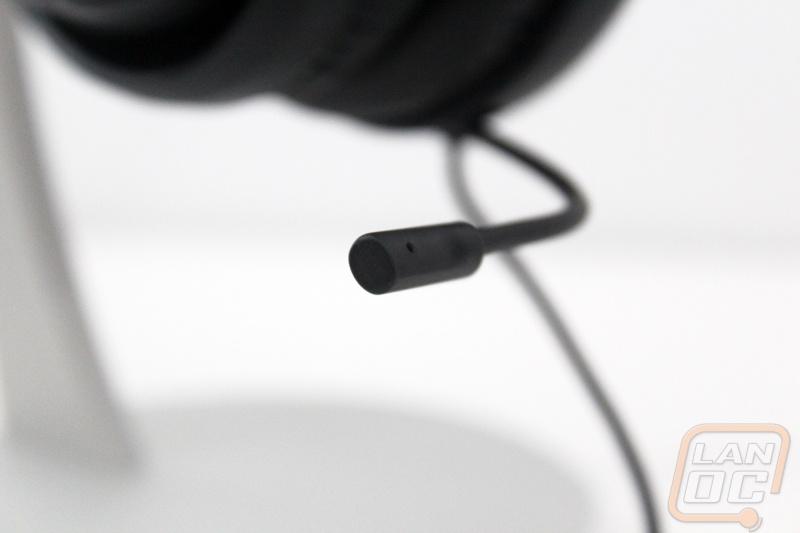 So it might seem a little crazy considering the Siberia V2 had exactly 1 million different color variations available but the Siberia V3 comes in an all-black and a white and great design. The black model is what I used above but they did send over a white model as well. Obviously the overall design doesn’t change between the two headsets, but it is interesting to see that the white isn’t ALL white like the black version. You basically get white on a little part of the earcup, the suspension mount, the suspension rods, and the two eyelets in the headband. The headband is black with a white SteelSeries logo across the top. The plastic vent on the side of the earcups is a dark gray and the leather earcup pads are dark gray as well. I mentioned this in the Siberia Elite Prism review but they aren’t doing all white anymore because of how quickly it got dirty and because people with hair dye sometimes had the dye bleed onto it. While this combo does look good, I would still love to see an all or almost all white model. Our almost all white Siberia V2 still looks amazing. 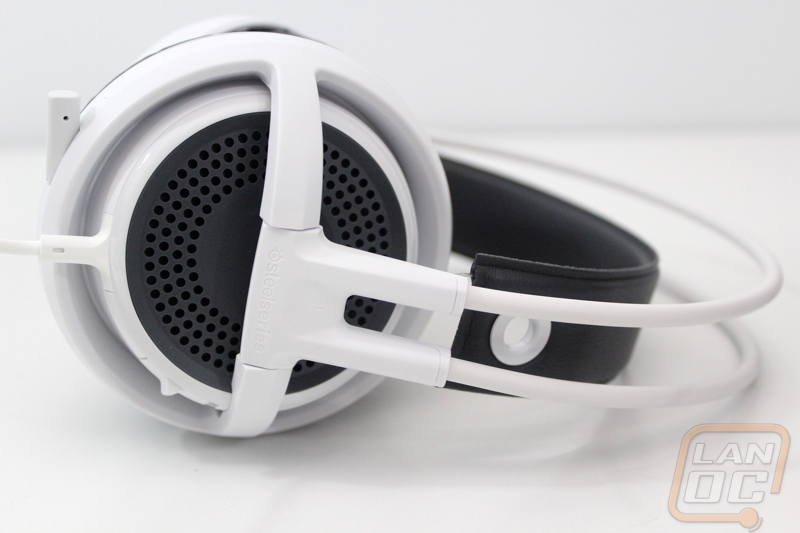 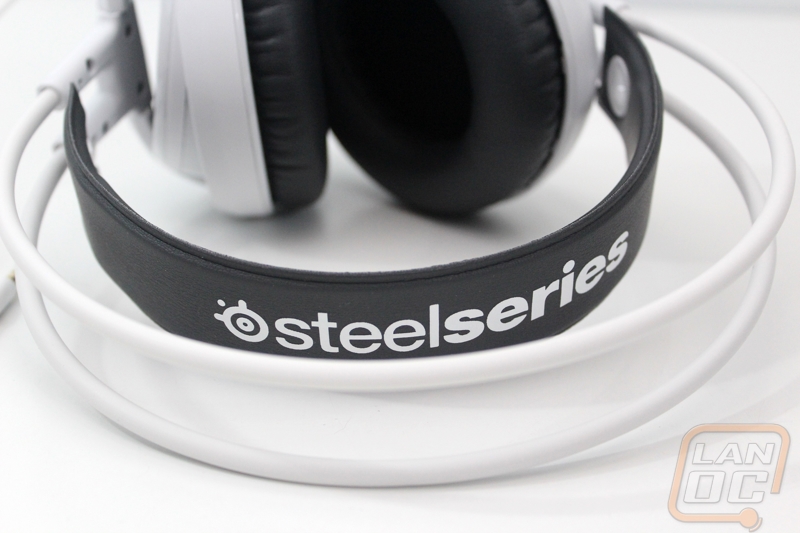 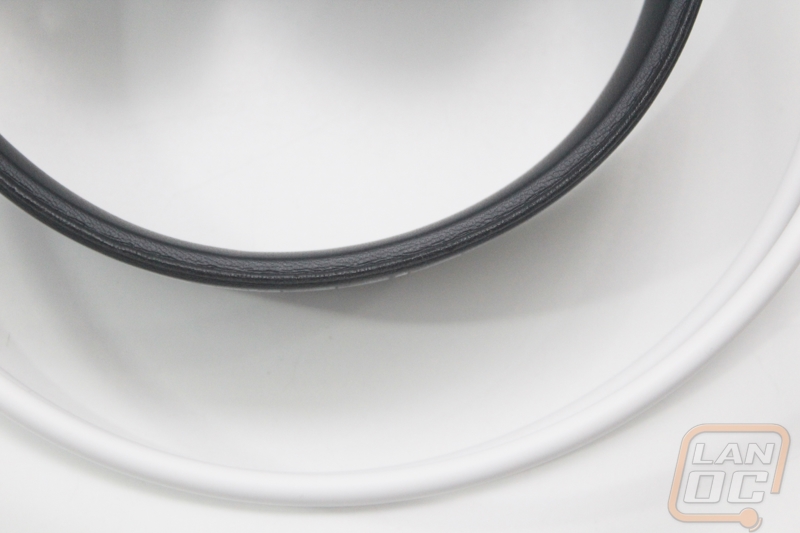 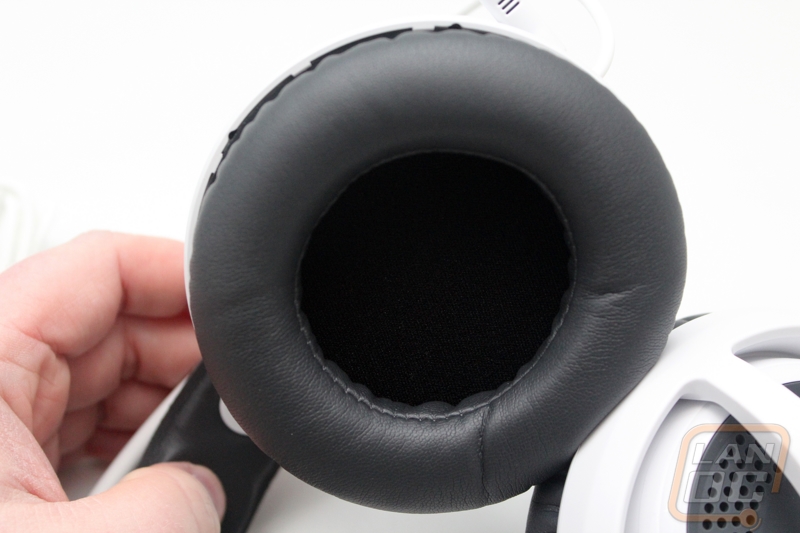 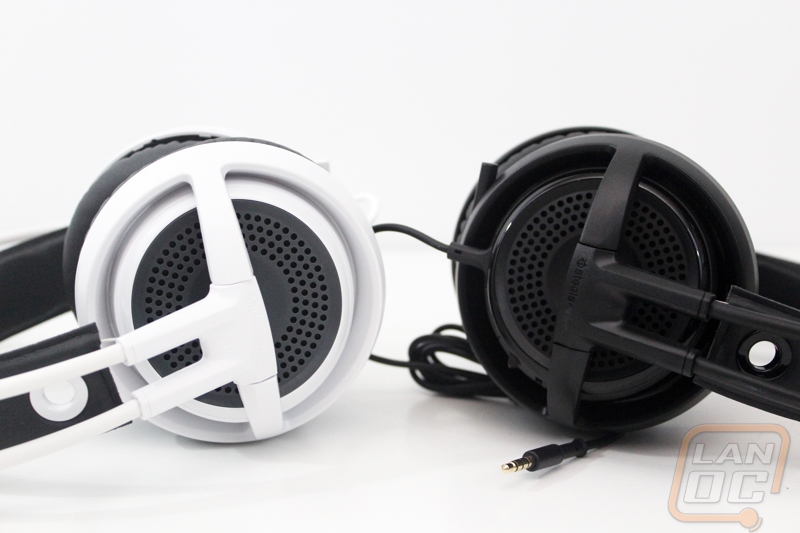 Here is a shot of both color options together. I wouldn’t expect to see SteelSeries hold out on other colors for very long. With the V2 they introduced it in black originally but quickly started trying other colors. I really hope they do the same; I really want a new orange model! 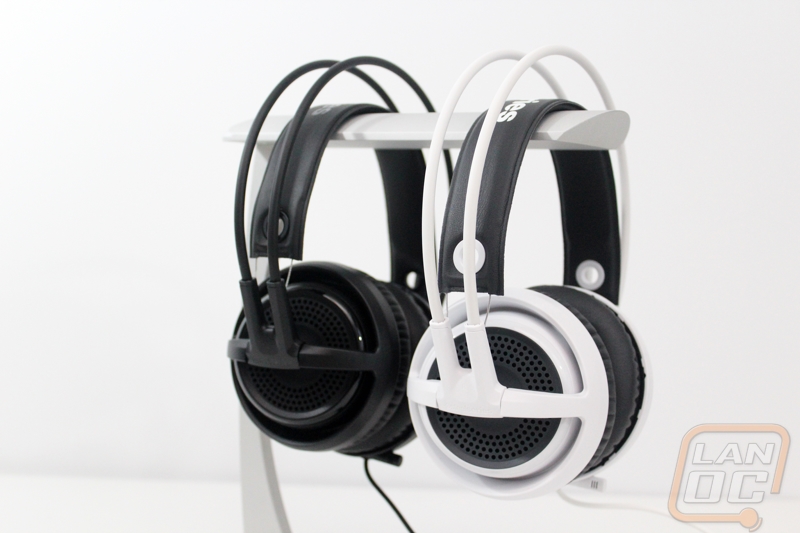 It wouldn’t be fair to talk about the V3 without actually showing what it looks like next to the V2 right? I grabbed my well used orange Siberia V2’s that I have been taking with me to events for years now. With the headsets next to each other we can see the change in the earcups better. It also gives us a better look at the change in the mount for the suspension arches. In the photo of both headsets hanging the V3 looks a little larger but that isn’t actually the case, my older V2’s are more broken in and the headband sags slightly. 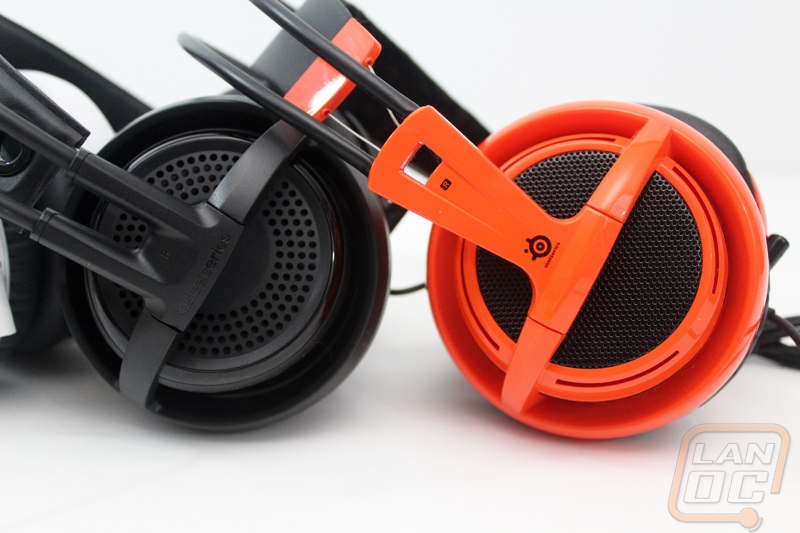 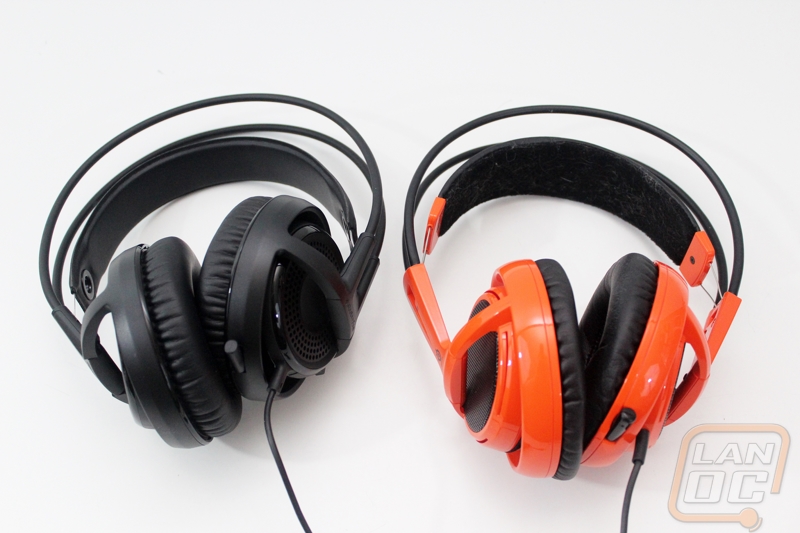 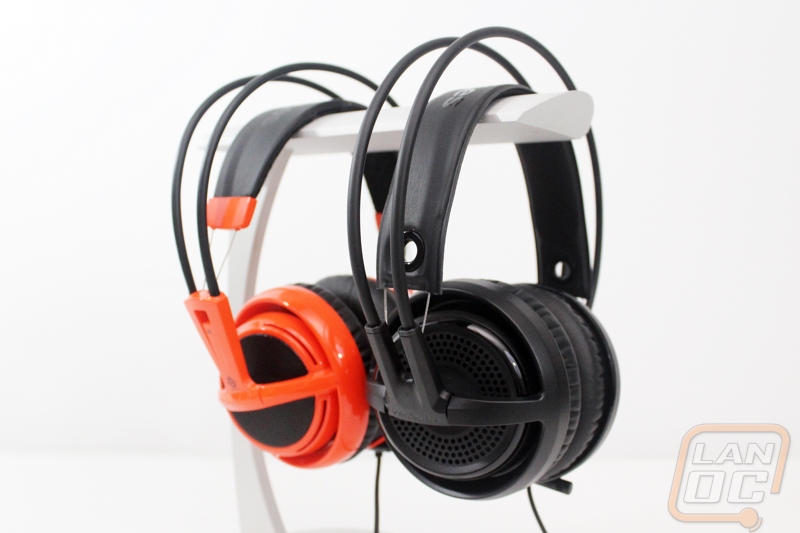 While the suspension headband stayed, SteelSeries did change the way it works slightly. On the V2 the headband had plastic pieces on each end that held the spring loaded metal cables. For the V3 they dropped the plastic and just used a large metal eyelet in the headband. Much like the loss of the metal mesh on the earcups, this change gave me the perception that they lowered the quality. In this case I actually think the metal eyelet will hold up better, but the new design looks (and most likely is) cheaper to make. I wouldn’t mind the change but the new design ends up with pointed ends on each corner, if they rounded these off I would actually be all for the new design. 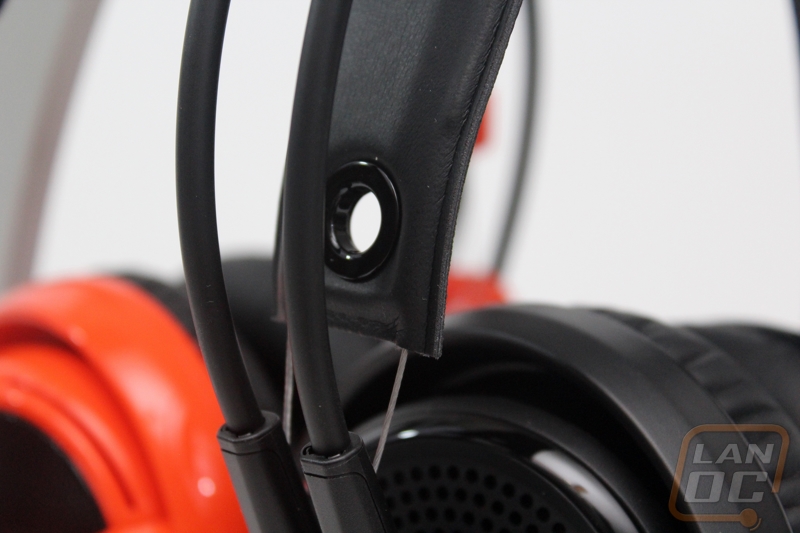 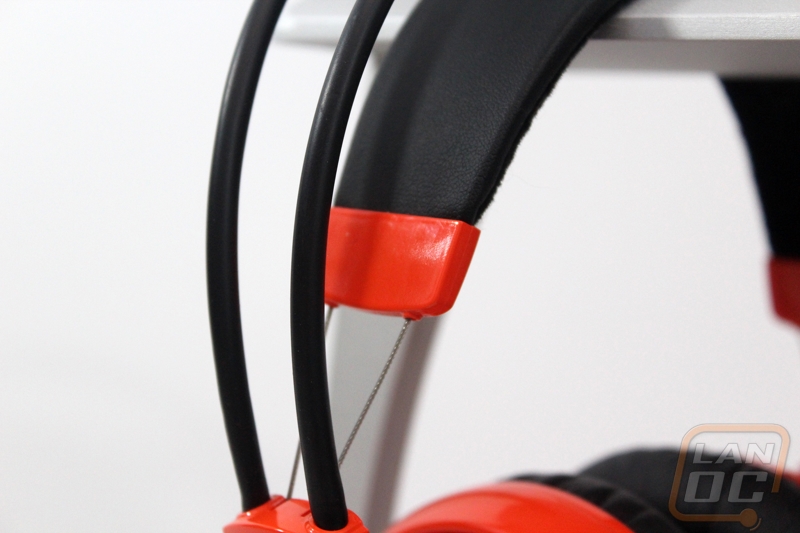 garfi3ld replied the topic: #35803 28 Oct 2014 20:32
The Siberia V2 is an extremely popular headset at our events and the V3 has been a long time coming. Today I finally have the chance to check it out and see if it lives up to the high standards that the Siberia V2 set.

Thanks for the detailed reviews with personal comments on all the little things along with the more obvious stuff. (I also love the fact that you test your headsets on both big head and small head use-cases.

I checked out the review both on this V3 and on the Elite Prism since I absolutely love my V2 and been using it for years, sometimes for full-day gaming without much of a break.
So, I was happy to see you comparing the V2 and V3 but what I missed is some words about how the V3 compares to the Elite Prism. Comfortwise and audiowise is what I'm curious about!

garfi3ld replied the topic: #35916 28 Nov 2014 18:36
Hey there, thanks for the kind words. I'm a little swamped trying to catch up after a busy holiday week so I can't go to in depth. But the short version. They are both nice headsets. While I do like a lot about the Elite Prism, its comfort/performance isn't a huge improvement over the v3's. When you consider how much more they cost I don't think its really worth the additional cost.

What you do get with the Elite Prism over the v3 is the tangle free cable, built in volume controls, and they use a little higher quality materials (aluminum headband, softer leather on earcups).

Nightwind replied the topic: #35917 28 Nov 2014 20:24
Thanks a lot for the really quick reply!
I was worried it might actually be *less* comfy or have less good sound, but then I guess it's more a question of how much the little bit of extra comfort is worth to me. That plus the little things like the volume control and the cool looks might actually win me over in the end - will see.

Thanks a lot for the info! Very helpful.

We have 863 guests and one member online