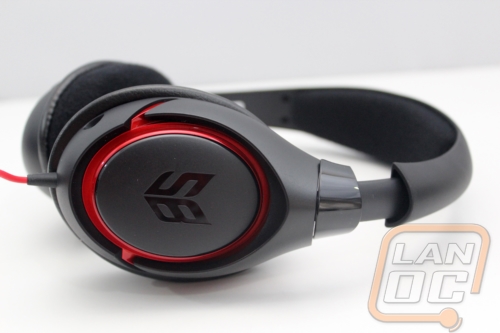 The original headset wasn’t exactly known for its audio performance per say, but it was the only headset on the market that focused on good gaming performance on a budget. These days there are a few manufacutes who have done the exact same thing with their entry level headsets. Because of that I’m really hoping the SB Inferno can still hold its own.

To put it to the test I ran through our standard benchmarks that include a movie, gaming, and a variety of songs. I also spent a lot of time wearing the headset to test out its comfort over extended gaming sessions as well. The headset looks a little small right out of the hole but surprisingly it expended out to fit me perfectly with room to spare. I typically prefer a large earcup design because the pressure on my ears can cause discomfort over long periods of time. The SB Inferno was no exception to that. It was comfortable for up to 4 hours of gaming before I would have to pull them off and take a few minute break. If you prefer an on ear design like this you might not run into this issue. For me it worked out as a great reminder to stop and walk around a little before jumping back into games.

Audio testing came with its own surprises as well. Highs sounded good, mid-range was a little muted but good enough, bass was a little weak but in game it still performed well. It was only with a few rap songs that it really showed. Just going off of the specifications I would have expected the Inferno to not compare to the Siberia on the high end but be close on the bottom end. In the end it was the opposite, the Inferno performed well but still has a little catching up to do to beat the Siberia v2. Then again, the Siberia isn’t even in the same price range, but I will get to that in the last section ;).

The microphone handled my voice well when using TeamSpeak and Skype. I didn’t run into any popping or weird sounds and it wasn’t overly sensitive and picking up room noise or anything like that. The flexible mic boom helped me put it where it needed to go but the only way to fully get it out of the way was to unplug it completely when eating. I prefer headsets that I can flip the microphone up or slide it inside of the headset. Overall, the microphone isn’t anything amazing, but it is enough to communicate with your teammates when gaming.

The only weird quirk I ran into when testing was with the sound bleed. The design looks like a closed ear design, so I expected outside noise to be a little muted. I noticed that you can literally hear the music just as well if you are sitting near someone with the SB Inferno’s on as you would if you yourself had them on. This isn’t the end of the world, a lot of open ear headsets do the same thing, but I expected a little more privacy with this being a closed cup design (or so it looked).