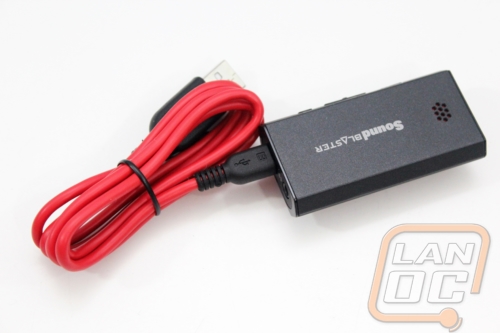 As phones, laptops, and other mobile devices continue to get smaller and smaller we have to compromise in some areas. A great example of this is overall sound quality. When was the last time you were shopping for an ultrabook and even considered what sound card was installed in it. I know when I picked up mine I didn’t give it any thought. Creative Labs recognized this and today is introducing two new mobile Sound Blaster products called the E1 and the E3. Today I have the chance to take a closer look at the E1 and see what it is all about.

With the E1 being such a small device it wasn’t a surprise at all when I saw the size of the box. On the cover Creative put a large photo of the E1 as well as a large E1 logo to catch your attention. Down along the bottom there are a few logos that give us a glimpse at what it is all about like the 600 Ohm amp, 106dB and the image that shows it working on phones, tablets, and laptops. Around on the back of the box there is another photo of the E1 as well as a few photos of it in use. There is a note up top that says that the Sound Blaster E1 increases the level of audio detail & resolution for a previously unreachable listening experience on both PC and Smartphones. This gives us a little information, but I feel like there could be a little more of an explanation to help someone shopping in a store know what they are looking at. 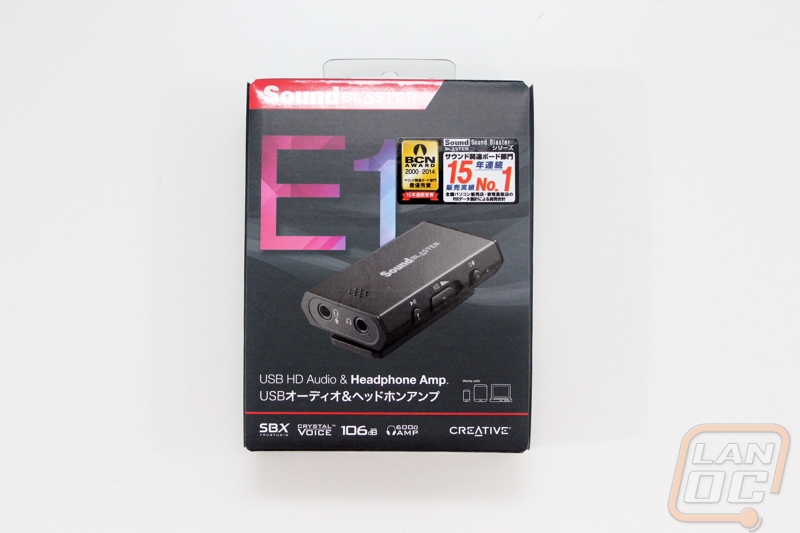 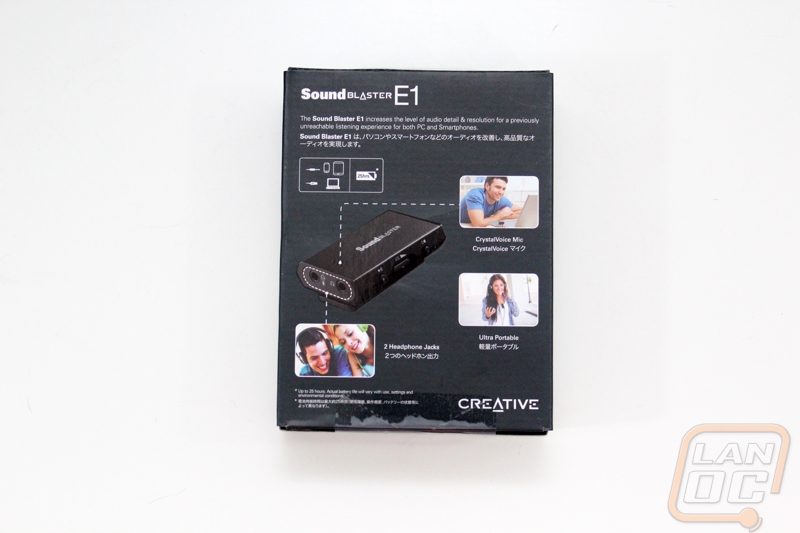 When you open the box up the E1 is displayed right on top for you to see. When you pull the E1 out you will find a hole that helps you pull the felt display tray out to get to the accessories and documentation underneath. For documentation, you get a small manual as well as a book on Creative customer support, services, and warranties. For accessories, you get two bright red cables. One is a headphone-to-headphone cable for hooking the E1 up to devices like a phone or tablet and using the E1 as a headphone amp. The USB cable is for when you want to use the E1 as a small sound card + headphone amp. 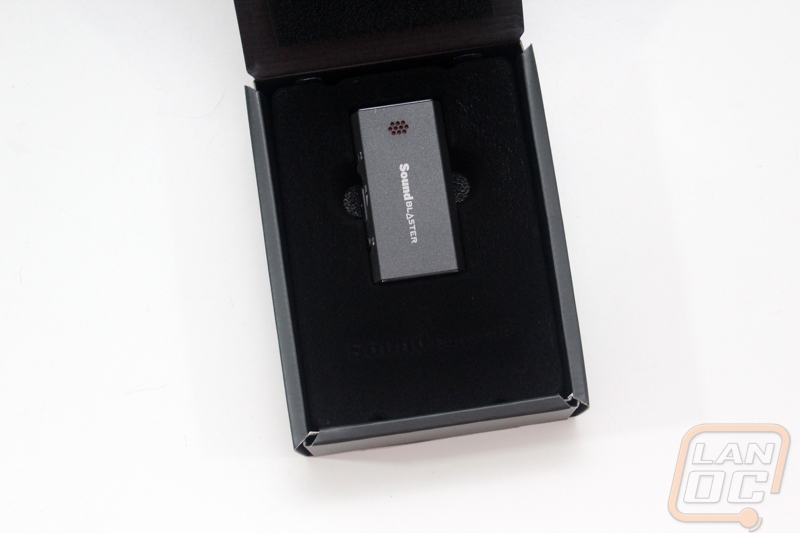 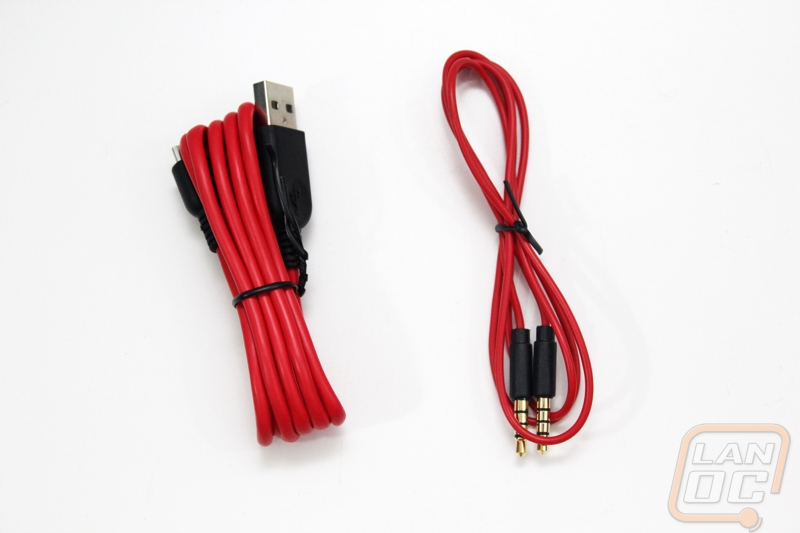 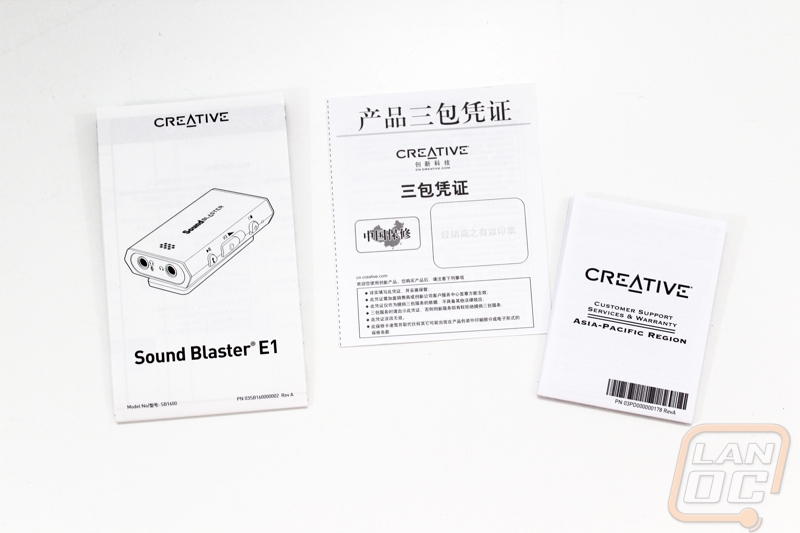 It’s hard to put the E1’s size into perspective in the picture below, it is just over 2 1/2 inches tall and 1 1/8 of an inches wide. This isn’t much bigger than the volume controller on a lot of gaming headsets. The E1 isn’t the smallest USB sound card I have seen but when combined with the headphone amp I don’t think I have seen anything smaller. 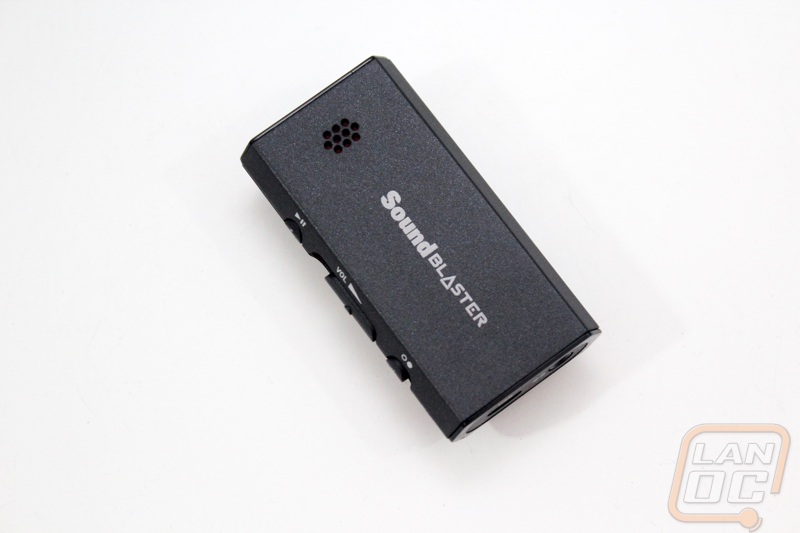 On the bottom you have a micro USB connection as well as the line in. These are your two connection options depending on what kind of device you will be using the E1 with. The USB also doubles as how you charge the internal lithium Ion battery as well. 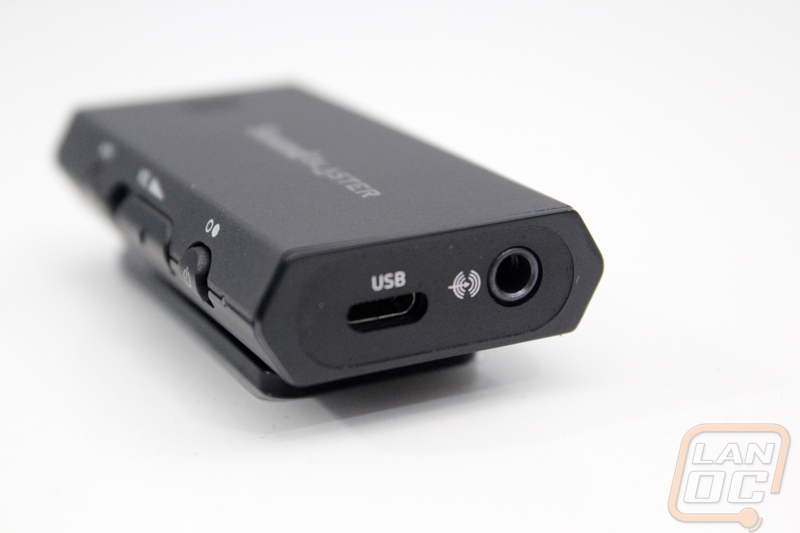 Creative has placed all of the controls together on the left side of the E1. You get a button to play/pause that doubles as how you answer your phone when you have it hooked up to the E1. Next you have a sliding volume control and the third is the power switch. When you power up the E1 there is a small LED just to the right of the power switch that lights up top let you know it is powered up. 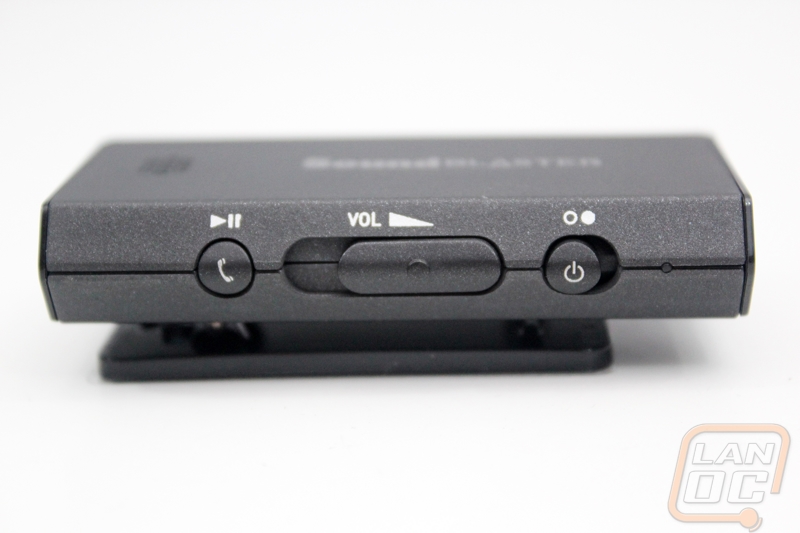 Up top there are two headphone jacks with the left jack pulling double duty. You can connect headphones or a microphone on the left or if you have a headset that uses a four pole connection (like phones) you can run your headphone and microphone through the same connection. Having two connections means two people can hook up their headsets and listen to the same music. If you look closely you can also see that the E1 has a mono microphone on the front of the device should you not have a microphone with you. 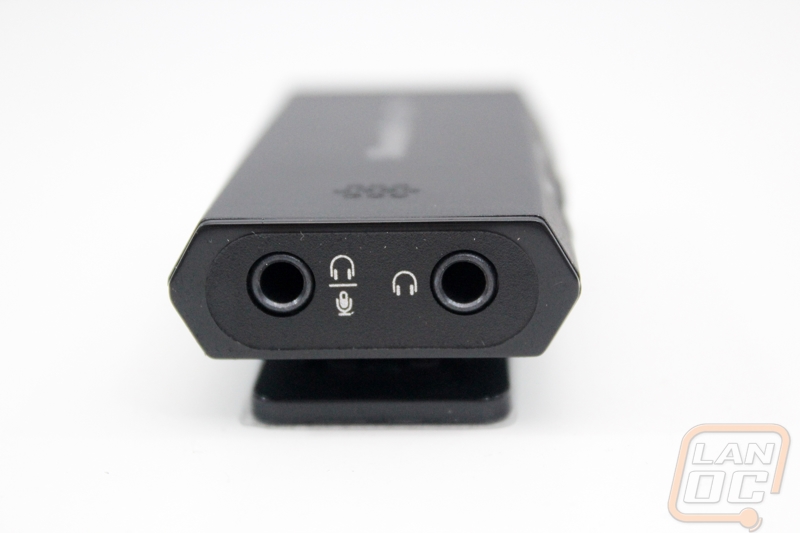 The right side of the E1 doesn’t have 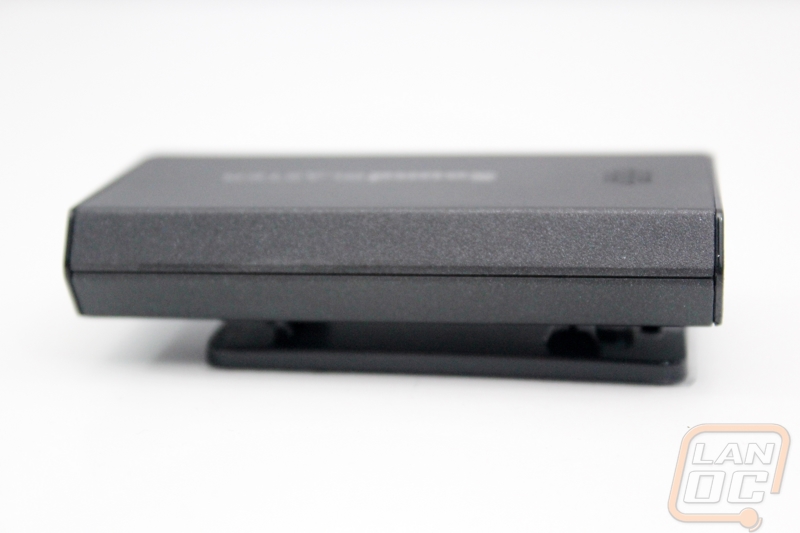 On the back the E1 has a clip for you to clip it to your pocket or shirt when walking around. 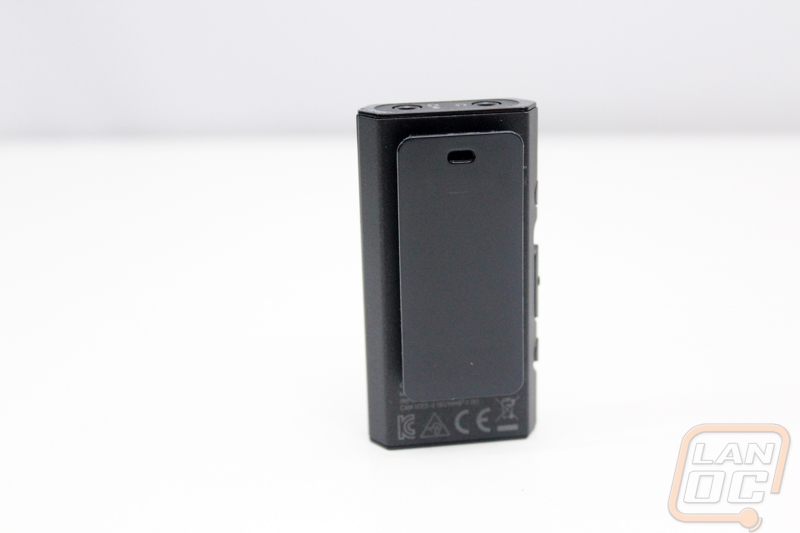 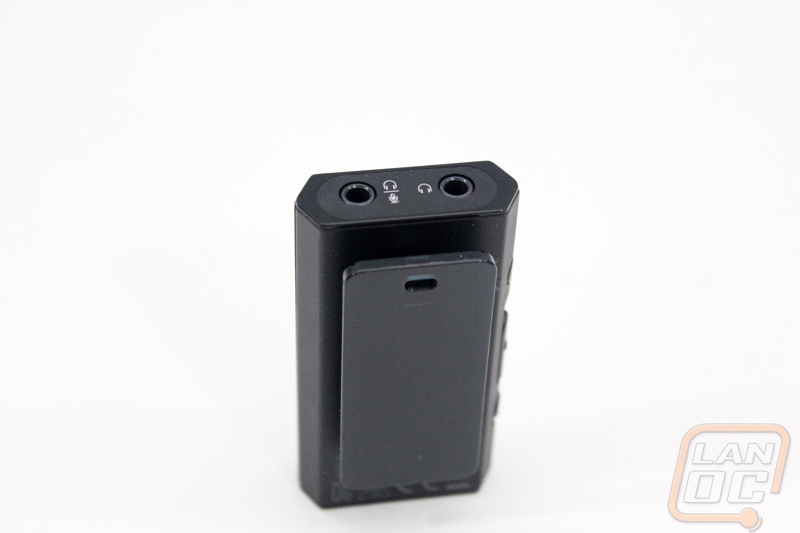 Here is a peak of the E1 with the USB cable hooked up to it. This puts its size in perspective a little more, the full sized USB connector looks huge next to it. 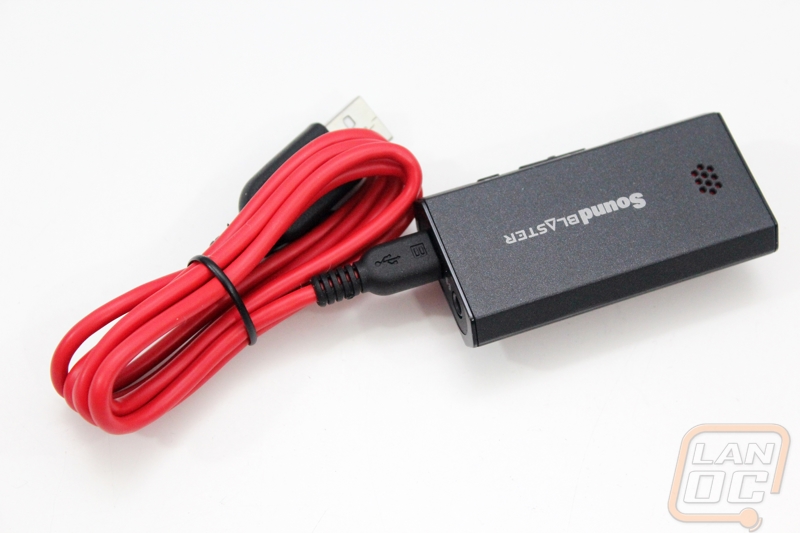 There are two ways you can put the E1 to use, you can use it as a sound card for a laptop or you can use it as a headphone amplifier for anything (with a focus on mobile phones and tablets). Because of this I had to go through my testing twice when doing audio testing. Once hooked to my laptop as a sound card and the second time to my Nexus 4 as a headphone amp. Starting with USB mode I ran through our standard benchmark suite of music (Bone Thugs N’ Harmony – Tha Crossroads, Eric Clapton- Tears In Heaven, Nat King Cole and Natalie – Unforgetable) Each song is selected to listen for different aspects like the bass in Tha Crossroads combined with the singing to see if the bass washes anything out. The E1 performed great with each song, a major improvement over the stock audio on my laptop. Next I tested the E1 with the opening of the new(ish) Star Trek movie, the opening fight scene has a whole range of sounds and each was livid and in your face, just like the movie itself. I also jumped into a quick game on my laptop to see how well the directionality was with the E1. Once again the E1 made me reliese how bad my onboard sound was more than anything else. The only issue I ran into on my laptop was a slight white noise sound when running through the E1. It was never noticeable in testing but when sitting idle I did hear it.

I next went through the same song benchmarks using my Nexus 4 to see how well the E1 performed as a headphone amp. The audio quality wasn’t as good as using it via USB but the difference was very slight. This is because you can only clean up and amplify a poor quality signal so much and the Nexus 4’s audio quality was mediocre as best. The headphone amplification was so good that it lead to me having to turn down the volume, could hear my earbuds in the other room when I accidentally left them playing, even with it turned down halfway. I didn’t have any issues with the white noise like I did with the USB testing.

What really stood out to me with the E1 is just how portable it is. You can easily clip it to your shirt or pants and when you need to put everything away it takes up very little room in your pocket or laptop bag. The battery life was good at about 8 hours away from USB. If you used this as a sound card and as a headphone amp you might not ever have to worry about the battery life as it will get charged when plugged into your laptop. Just don’t be like me and forget to turn it off each time killing the battery overnight.

With my gaming laptop I have no problem packing a full sized mouse, a laptop cooler, and anything else I might need for a mobile office. When I picked up my new laptop size became a much biggest issue for me. I spent a lot of time looking at laptop bags to be able to fix exactly what I needed and nothing else, keeping its size and weight to a minimum. After driving almost 3000 miles on vacation this year carrying both our gaming laptop and the small one I remembered why I wanted to go so portable. It was really a shame that the E1 didn’t come in until after vacation, because it fits perfectly in my small laptop bag and frankly with its dual functionality with my phone/tablet and laptop it earns its spot.

Audio performance when testing both the USB sound card and the headphone amp were great. I did have that white noise via USB but I have to wonder if there wasn’t a problem with our USB cable because I had no issues when testing through the headphone port. The E1 managed to make my onboard sound on my laptop sound bad in comparison and it was able to improve the sound of the Nexus 4 considerably. Testing in game, in movies, and with music all sounded great. It isn’t a replacement for a high quality sound card in your main PC but if you are used to great audio quality at home the E1 can help bring that experience with you on the go. 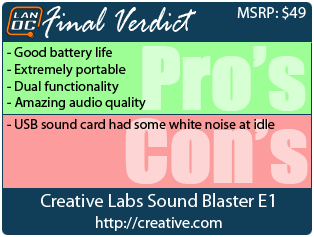 We have 1662 guests and one member online