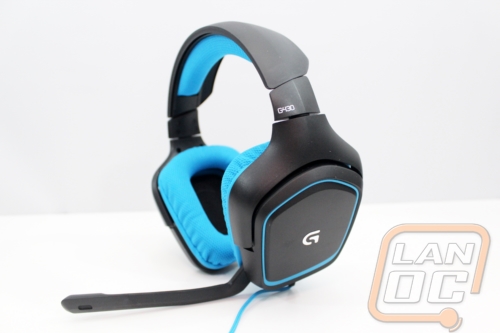 Most of you are familiar with most of Logitech’s product line at this point from having owned one or knowing someone who uses Logitech products. For the most part their product line has stayed the same, with just a few exceptions and with small refreshes like what they did this past year. One area where they expanded their product line this past year though was their audio line. Before they just had the G35 and the G930, but they have now added the G430 and the G230. You may have seen them with their funny commercials during LCS this year. Today I am going to find out how the G430 compares to the G930 and gaming headsets from their competition.

Logitech stuck with their new science theme for the G430’s packaging. The cover of the box has a half x-rayed photo of the headset as well as a window that gives you a peak at the headset. On the back we have another photo of the headset, this time Logitech has highlighted a few key features. Inside Logitech matched the interior color to the same blue trim on the G430 itself. Along with the headset, you get a USB sound card and a small setup guide and important information packet. The G430 is held in place with its fold up formed plastic window and a cardboard backing that also holds the cord and paperwork in place. 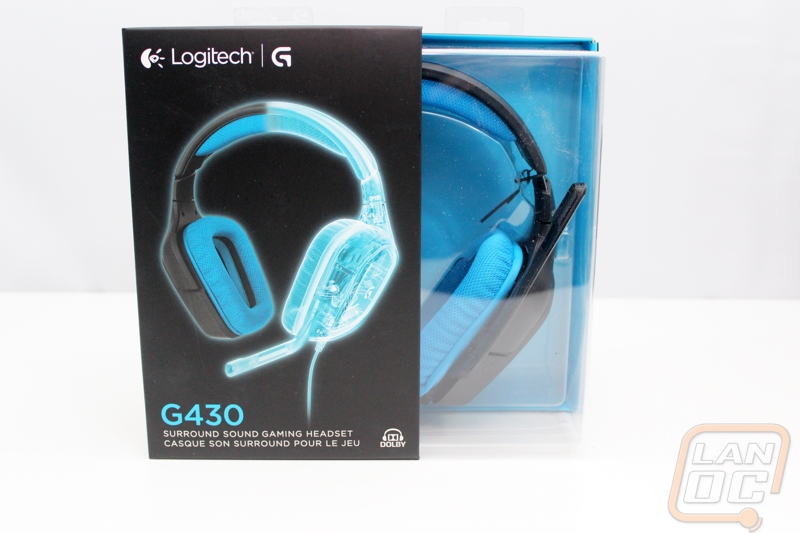 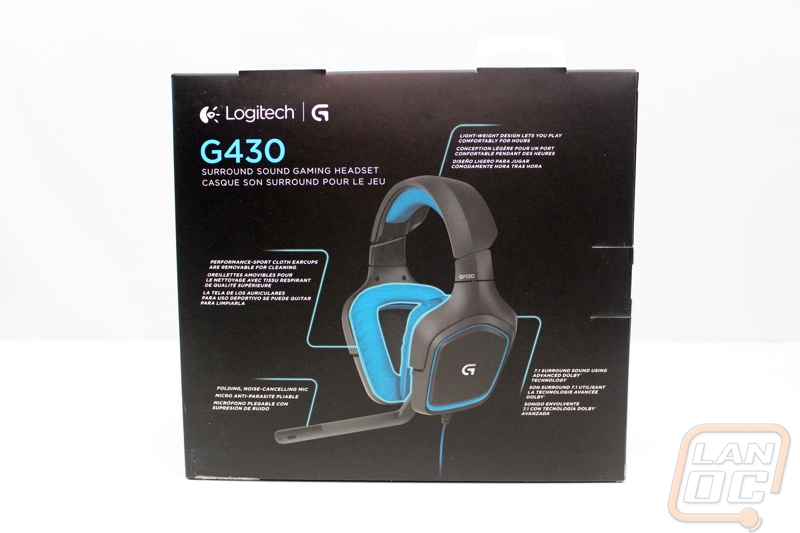 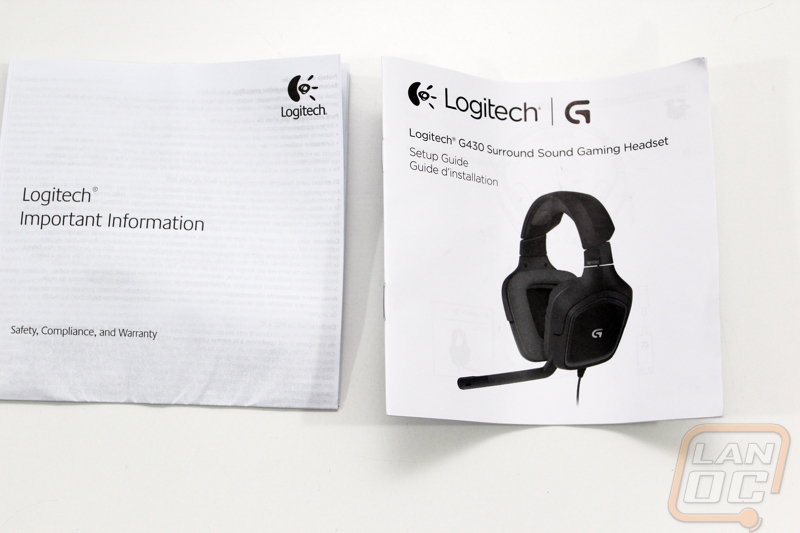 If you have seen the G930 or the G93 you will recognize the overall shape and styling of the G430. Beyond the new G logo and the blue trim on the earcups the shape is the same as their other headsets. Most manufactures go with a round earcup or sometimes a rectangle shape. Logitech’s earcup design is very unique but if you think about the shape of an ear with the ear lobe hanging down their design makes sense. 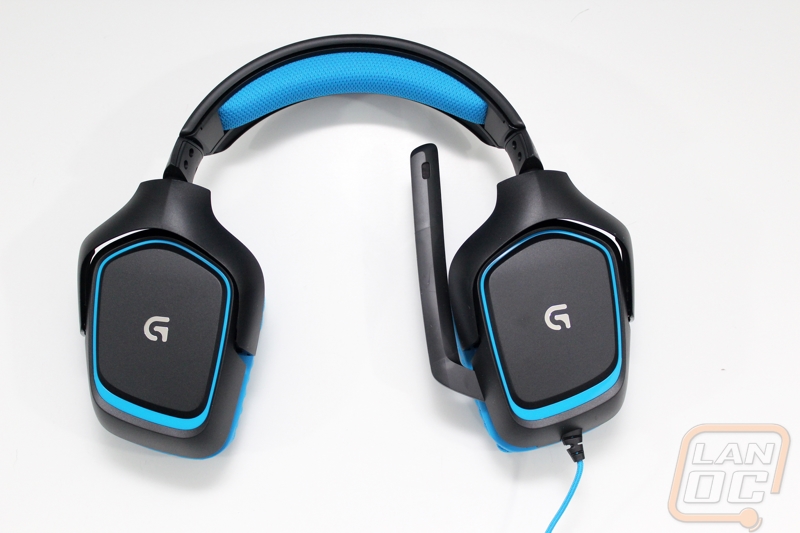 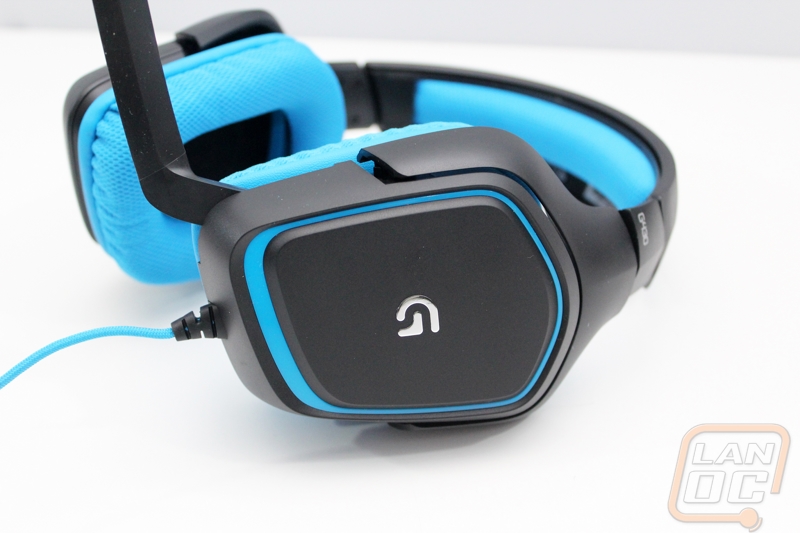 To keep your head from hurting while you wear the G430 Logitech put just under an inch of padding on the top. The padding is wrapped up in a bright blue fabric/mesh combination. 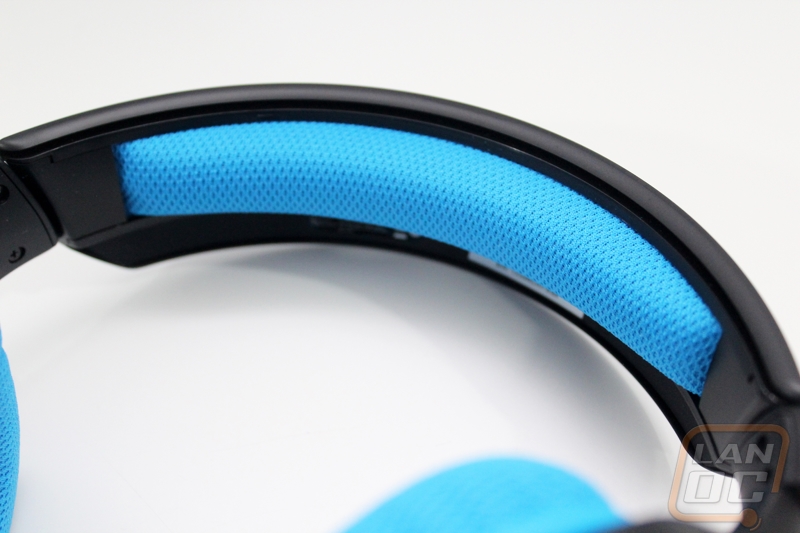 The blue earcups match the blue used on the headband of the G430 and really catch your eye. Logitech used a fabric/mesh combination that is soft and breaths more than a leather or faux leather. This is a little different than what they used on the G930, most likely to save on costs slightly, but I’m happy with the material. 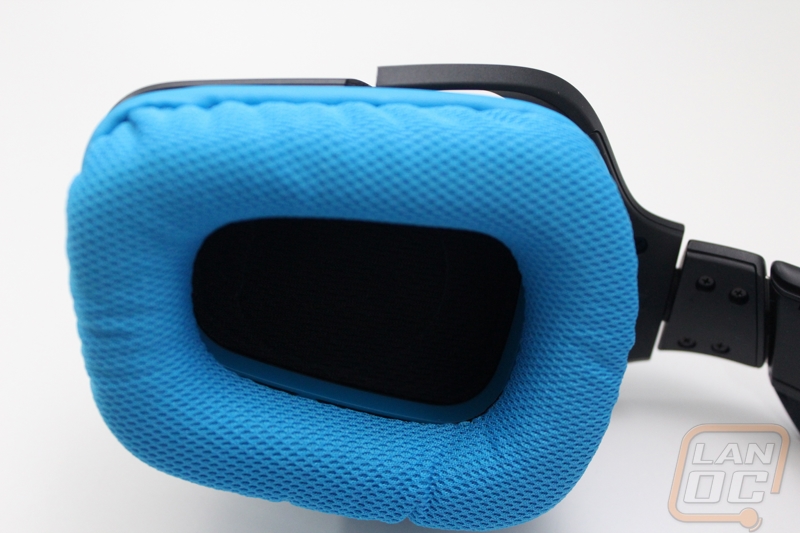 The G430’s microphone swings down just like the G930’s headset. The microphone is fairly solid with only a slight amount of flex in it. This can take a little adjustment for someone like me who is used to the flexible microphone booms from companies like SteelSeries. 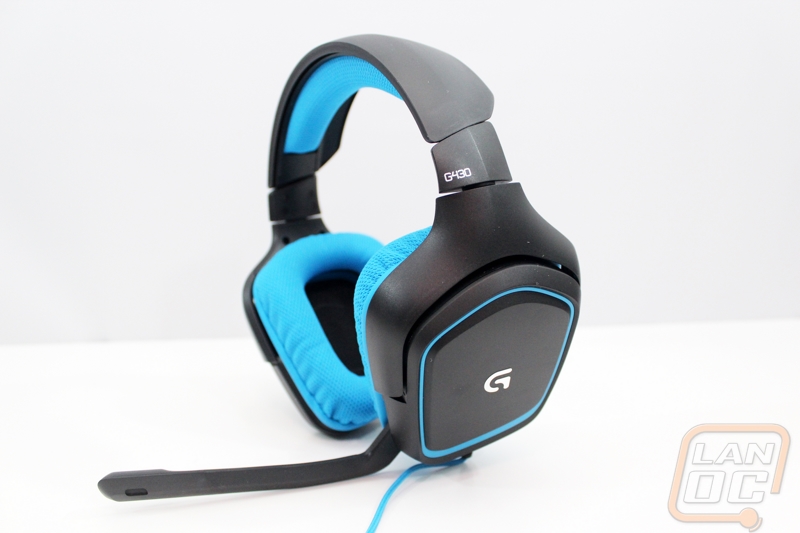 The G430’s cord stands out compared to everything else on the market because they color matched it to the same blue used on the earcups. Built inline you also get a small clip on controller that has a volume knob on the side and a microphone mute switch. The cord comes with a built in Velcro cord tie for keeping things tidy. The microphone and headphone jacks are fairly standard but the pink and green coloring on each is a little muted, I found them hard to spot without having to look closely. 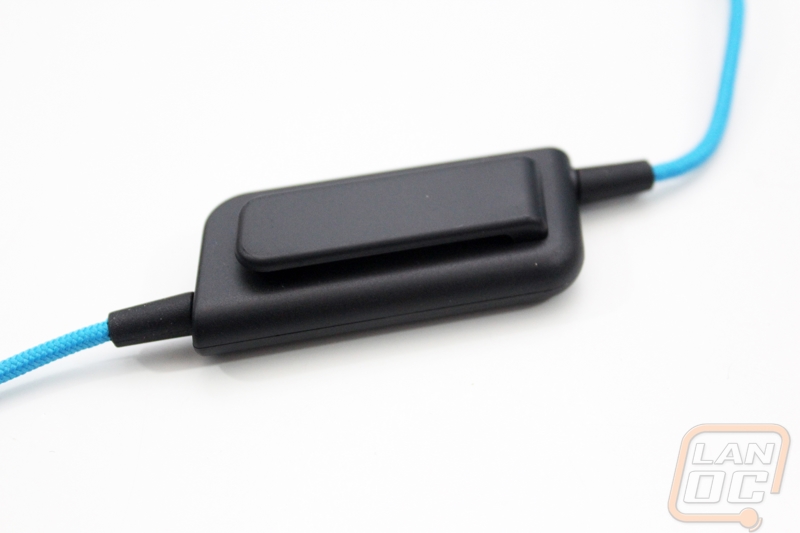 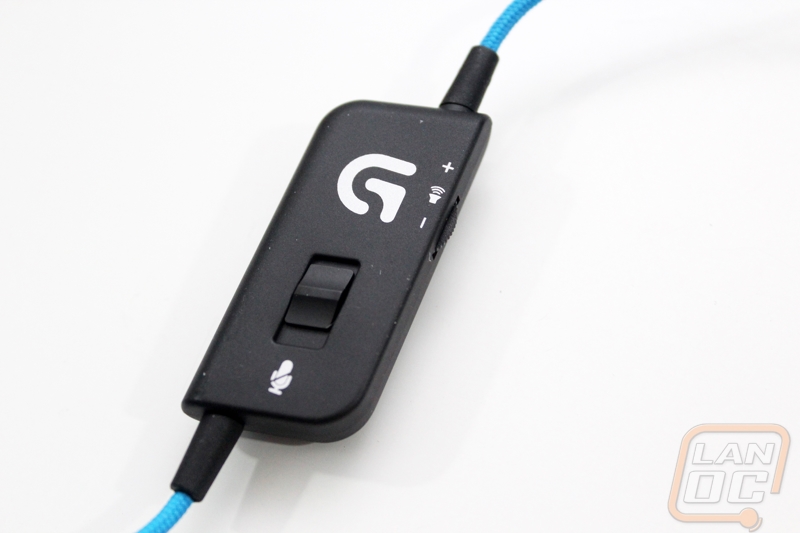 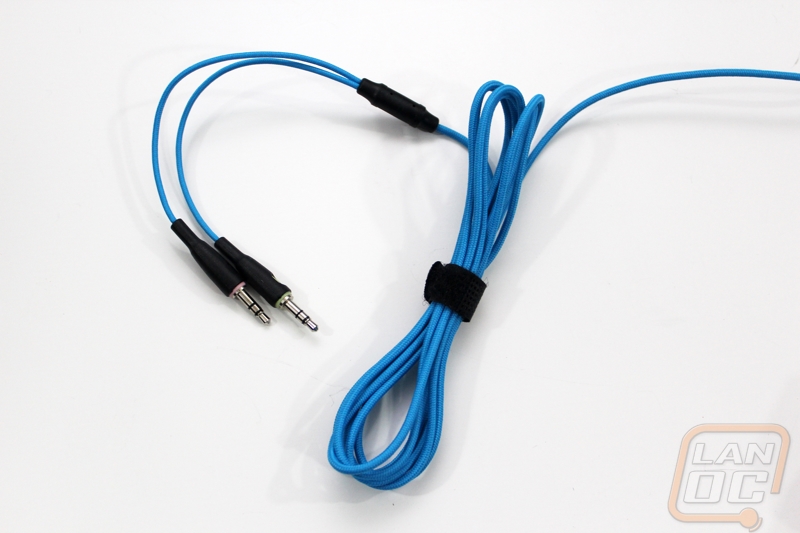 If you would prefer the G430 to be a USB headset Logitech did leave you the option with a USB sound card. Having the option but not being forced is great for someone like me who might need to hook their headset up to different devices. A good example of this would be using USB on your PC but the standard headphone and microphone jacks on your laptop and tablet. The adapter handles both the headphone jack as well as the microphone. Logitech labeled both on the top of the sound card, but surprisingly didn’t color code them as well. 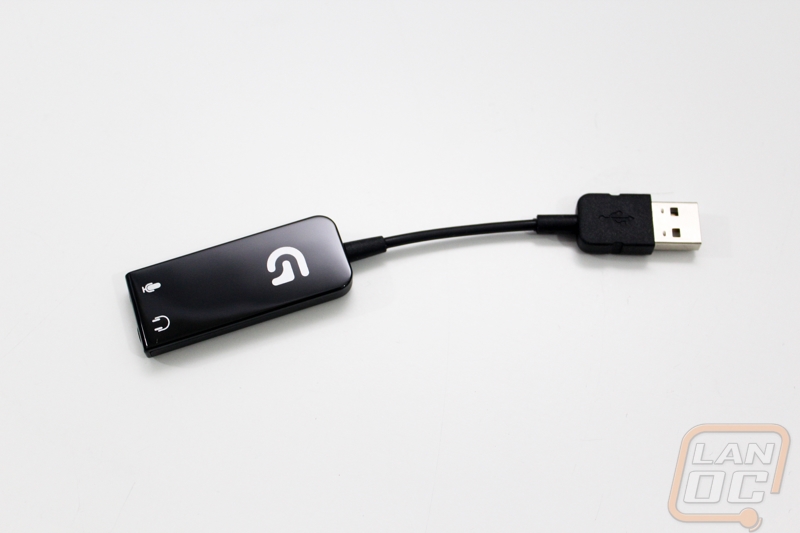 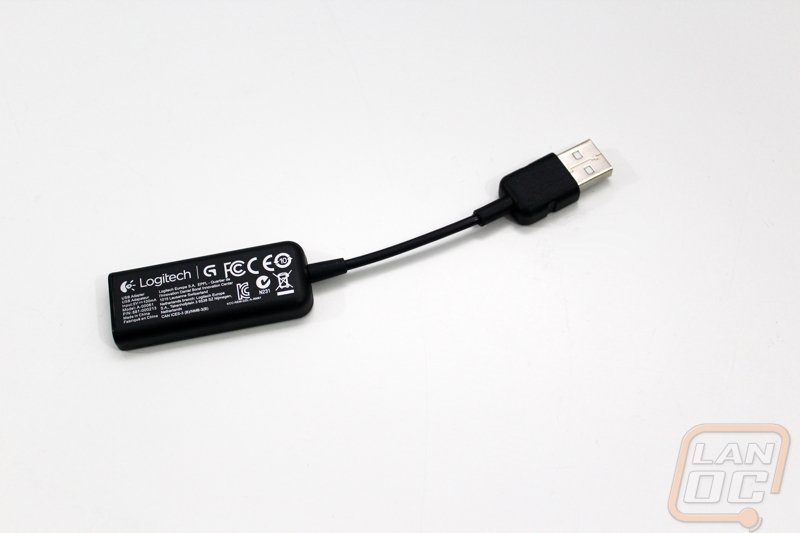 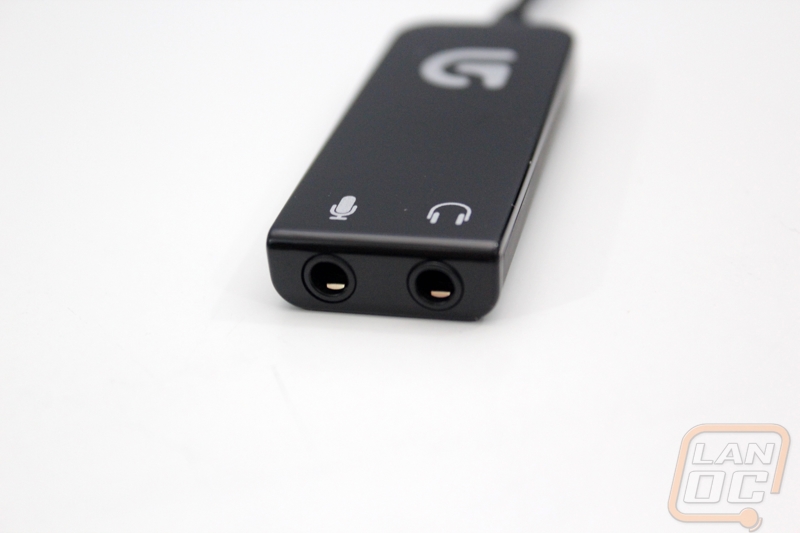 The comfort of the G430’s was great in short and long sitdowns with the headset on. This wasn’t a big surprise considering how comfortable their past headsets have been as well. The earcup design fits perfectly around my ears without putting any pressure on my ears. Typically that pressure is what causes discomfort for me over time. This is why I normally prefer over the ear designs over smaller headsets that press on your ears. Although I prefer floating top bands for their comfort, the padded top band on the G430 did a good job of keeping the pressure off of the top of my head. The mesh earcup design did help a little with keeping my ears from getting warm, but I still had to pull a cup off my ear for a little while when doing heavy gaming. Overall I would still prefer leather earcups for their softness but the mesh design isn’t bad as well. 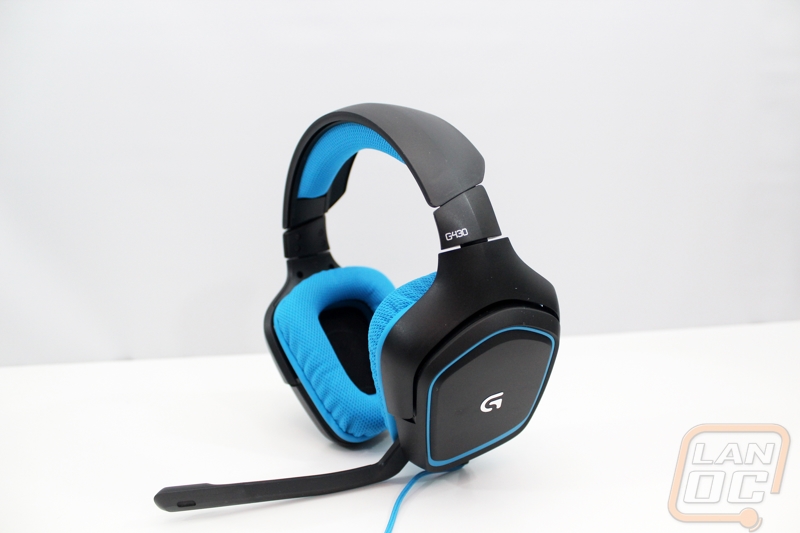 When it came to audio performance I was impressed right out of the hole with the G430’s when listening to music. They are bass heavy so if you prefer a more natural sound you might not be a fan, but most people seem to prefer a lot of bass in their music, movies, and gaming. Logitech may have designed the G430’s for gaming, but I loved listening to music and watching movies on them as well. I ran through our test suite and the extra bass really gets your attention while watching the new Star Trek movie with its crazy fight scenes.

When doing through our mix of test music that ranges from classical to rap and even a little Eric Clapton I found myself impressed over and over with the G430’s. I’m not going to say that they would replace a high end pair of headphones designed specifically for music, but they did hold their own, something that a lot of gaming headsets don’t do. Where the G430’s really shined though was in game. Their directionality was great and this really came in handy in first person shooters. Highs were crisp, making it easier to hear gunshots but with the extra bass you will still get the full experience as well.

Logitech did a great job with the G430’s. They stuck with what worked on their G35 and G930 headsets as far as shape and audio performance while making the headset something that more people could afford. Going with the bright blue trim and fabric won’t go over with everyone, but I really liked the look. Just like their previous headsets, the G430 was extremely comfortable for both short and long term use making it a great option for those of you who might game for a little longer than you care to admit. Unlike the last few headsets I have tested, I didn’t have any issues with size as well, in fact there was room to fit a much large head than mine if needed. If given the choice I would still go with the G35 or G930, but at the G430’s price point it’s understandable that you would have to drop the volume control built into the headset itself and the macro buttons. If you were on a budget saying a little money on the headset could mean more performance in game with a faster video card. 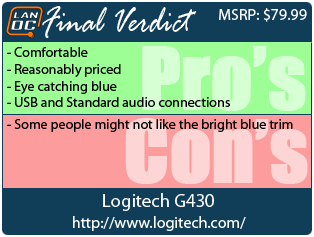 You might call him obsessed or just a hardcore geek. Wes's obsession with gaming hardware and gadgets isn't anything new, he could be found taking things apart even as a child. When not poking around in PC's he can be found playing League of Legends, Awesomenauts, or Civilization 5 or watching a wide variety of TV shows and Movies. A car guy at heart, the same things that draw him into tweaking cars apply when building good looking fast computers. If you are interested in writing for Wes here at LanOC you can reach out to him directly using our contact form.
Discuss this article
Log in to comment
Posts in discussion: Logitech G430