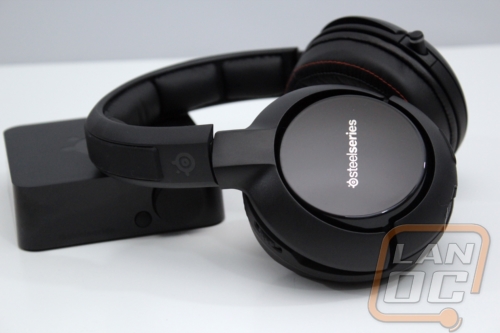 There are two main parts to the H Wireless, its transmitter and the headset itself. Typically with a wireless headset I don’t have to focus on the transmitter all that much. A lot of them are just small USB transmitters with no important features and every once in a while they will come with an extension cable for you to be able to put them up on your desk for better reception. With the H Wireless things are completely different. This is partly to do with the amount of devices that the H Wireless supports, but they managed to pack even more into it, so let’s take a look. 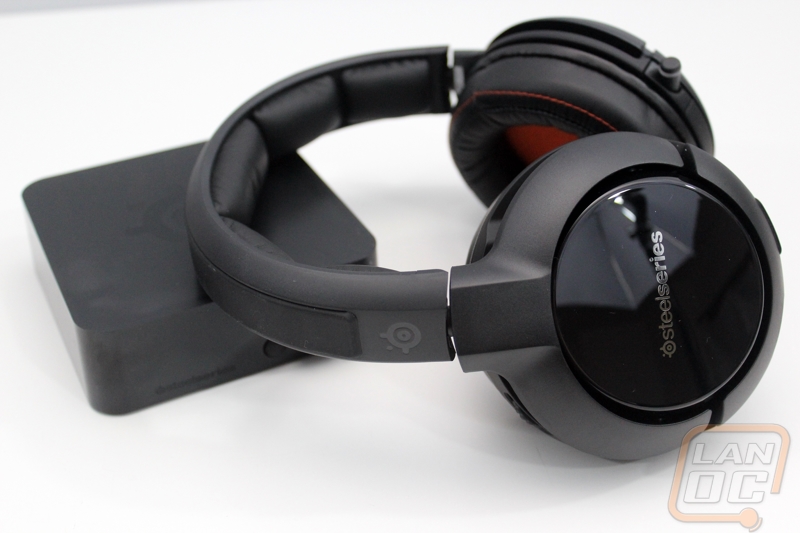 First, to give a little perspective, the transmitter is just over 4 inches wide and 4 inches deep and an inch and a half tall. So when you put it on your desk or near your game consoles it won’t take up to much space but it does have a larger footprint than its competition from Turtle Beach and a similar footprint to the A50 from Astro Gaming. The transmitter does have a few features that those two competitors don’t have though. First, right on the front you have the volume knob and menu button. When paired with the display that is also on the front you can flip through all of your inputs as well as equalizer settings. My only complaint about the transmitter is the competition built in headphone stands into theirs and SteelSeries didn’t go that route. I would love to see an optional stand that will fit the transmitter on it. That same stand could be used for other SteelSeries headsets as well. For now I will have to make do with my Thermaltake headset stand. 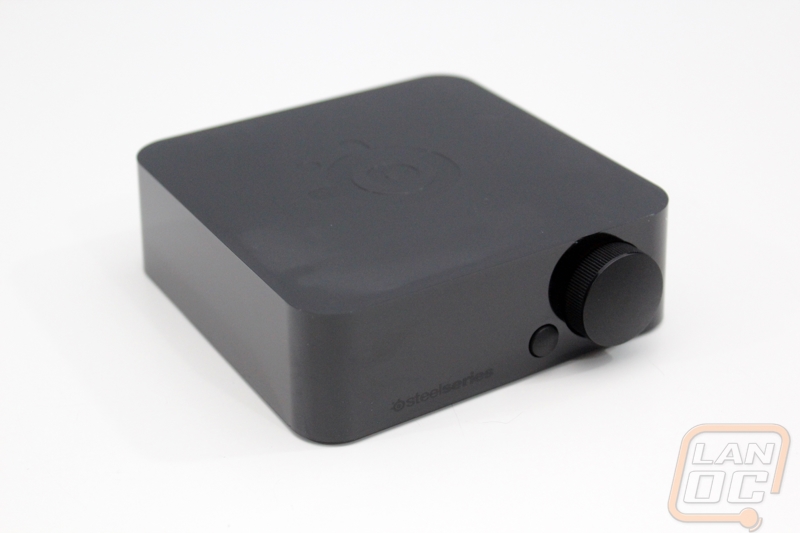 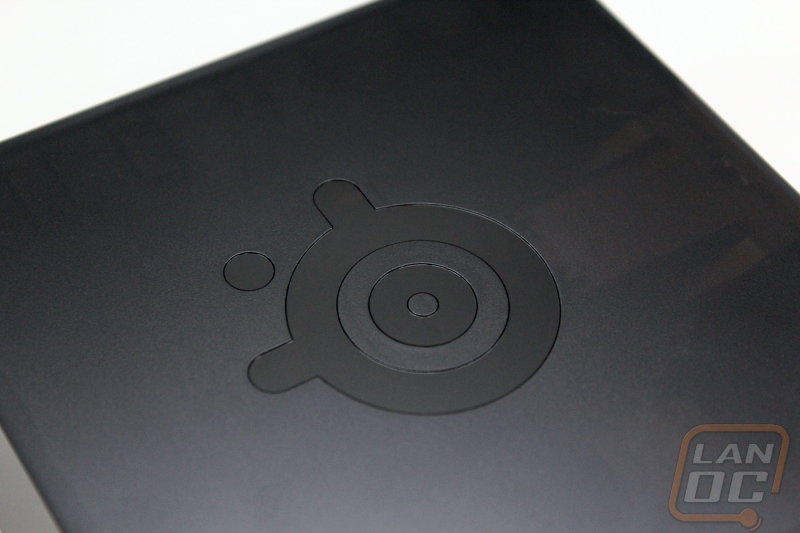 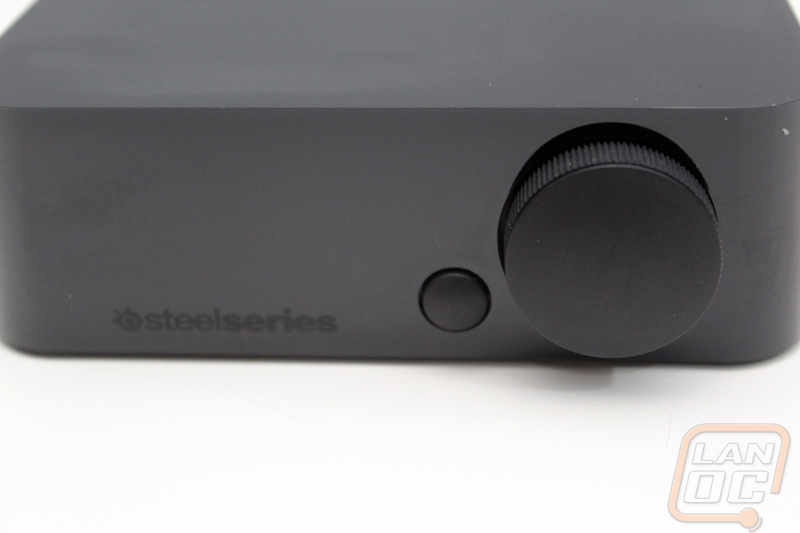 The H Wireless takes a unique approach for its charging compared to other wireless headsets that I have tested. Typically you would just have to plug in your headset to get it recharged. This isn’t a limitation for someone like me who would be using it at my desk anyhow, but with the H Wireless this could be an issue when using them with another device like a console that is across the room. To fix that, SteelSeries built in their battery charger into the transmitter on its right side. Here you can keep a fully charged battery ready to go to swap out when your other battery gets low. I’m not a huge fan on how the battery is held in personally. When the batter is in the charger you have to lift up and the charging springs will help push it back out. With it being on the side you will have to keep that in mind when you place the transmitter on your desk, in my case it fit perfectly on the base of my monitor. 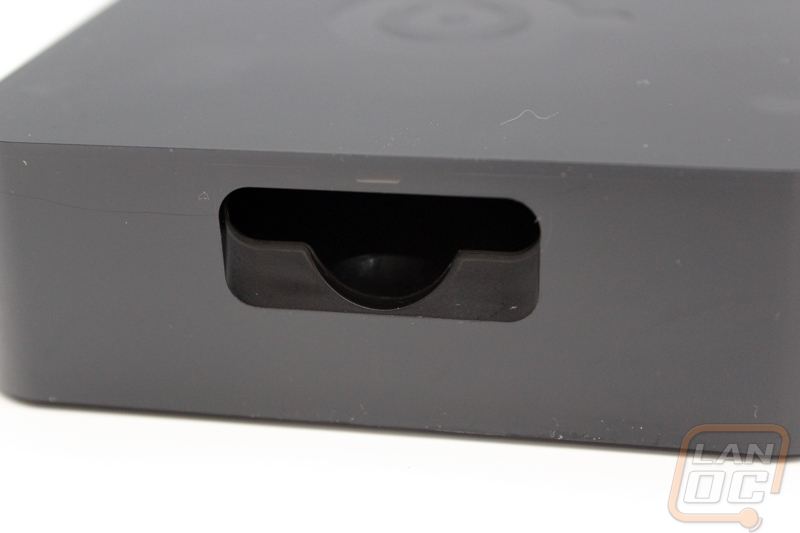 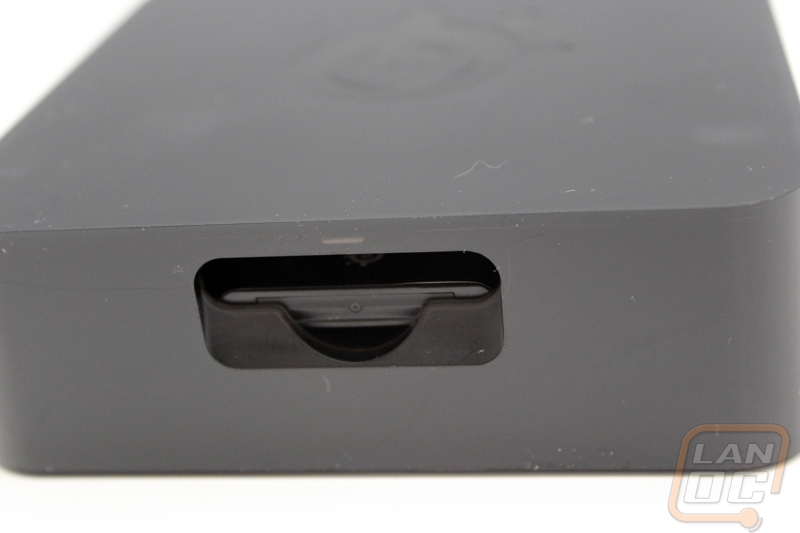 On the back of the transmitter you have six connections available total. The DC connection is a requirement for any configuration but from there you can pick what you need. For PC use you can go with optical or analog inputs or with USB as well. The chat out is for your voice chat. The H Wireless can actually livemix your voice chat or let you do it manually. 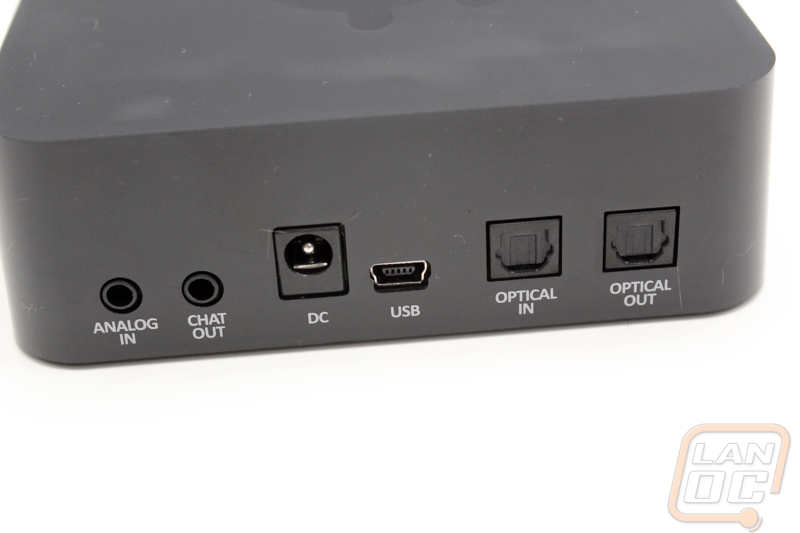 On the bottom you have all of your required warnings and Dolby logos. Beyond that a good portion of the bottom is covered in rubber to keep the transmitter firmly in place. 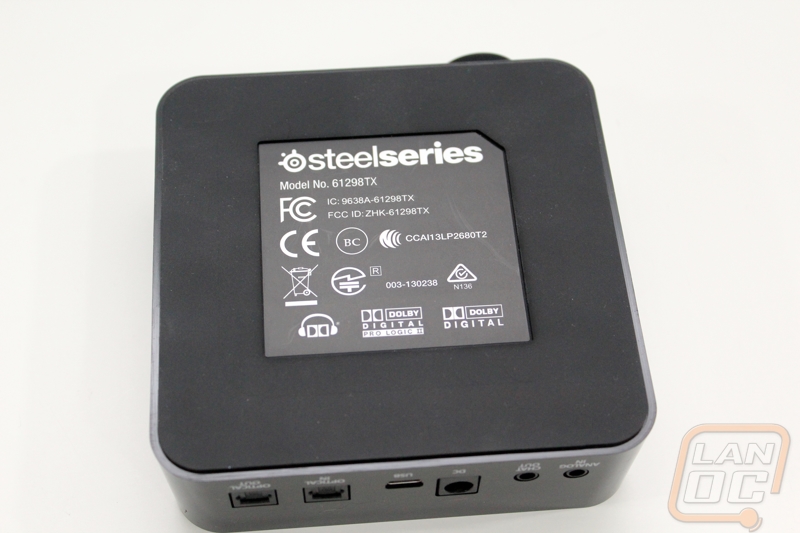 The top band of the H Wireless uses a combination of plastic and rubber to be one of the most flexible headsets I have ever used. SteelSeries also slipped in a little styling by embossing their logo into the rubber as well. 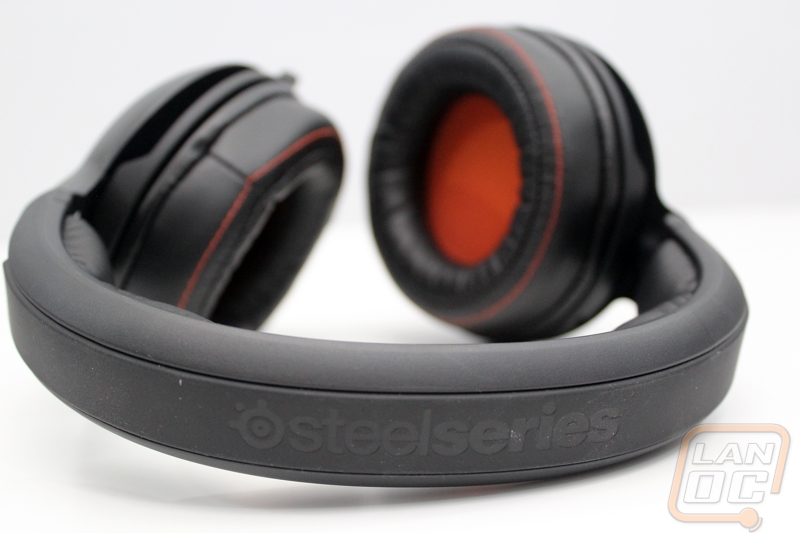 Like all other SteelSeries headsets, they went with a pull out microphone on the H wireless. This one does have a new feature, there is a red LED on the end of the microphone that lets you know when you have it muted. This isn’t the first time I have seen the feature itself, but it is the first time I have seen it on a SteelSeries product. Considering how many times I have been talking to only find out I was muted, I’m sure it will come in handy quickly. 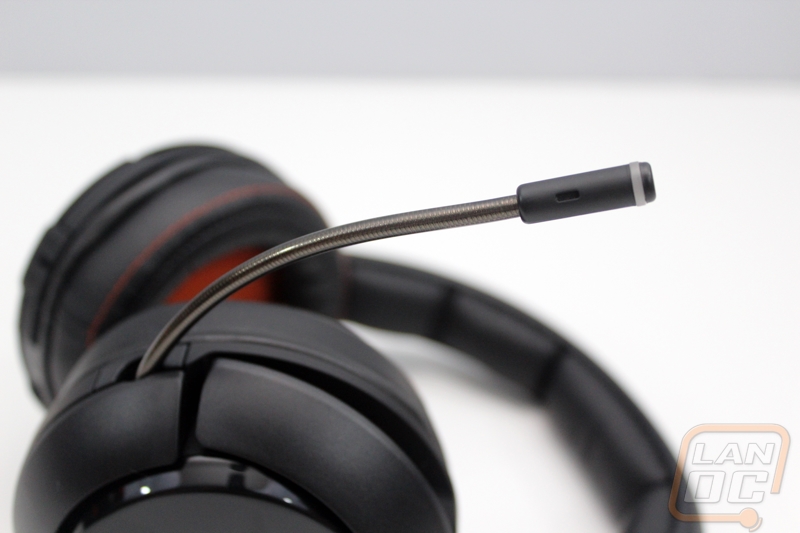 Along the bottom of the headset you will find a few things. First you have two connections, one for the team chat on your console games and the other will actually let you plug in a second headset to share what you are listening too. This is great because you can still take advantage of the wireless but if you wanted to quietly watch a movie with someone or game with a friend on the couch you can. The two buttons here are your power and microphone mute buttons. Along with those you have a white LED light that lets you know when you have powered the H Wireless on. It takes a while to get used to what each of the buttons do, I wish they would have done more to distinguish them, especially the power button. 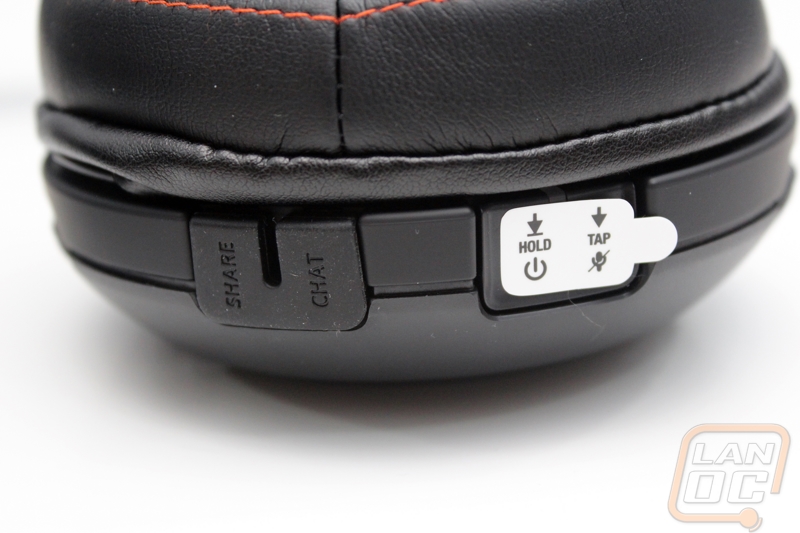 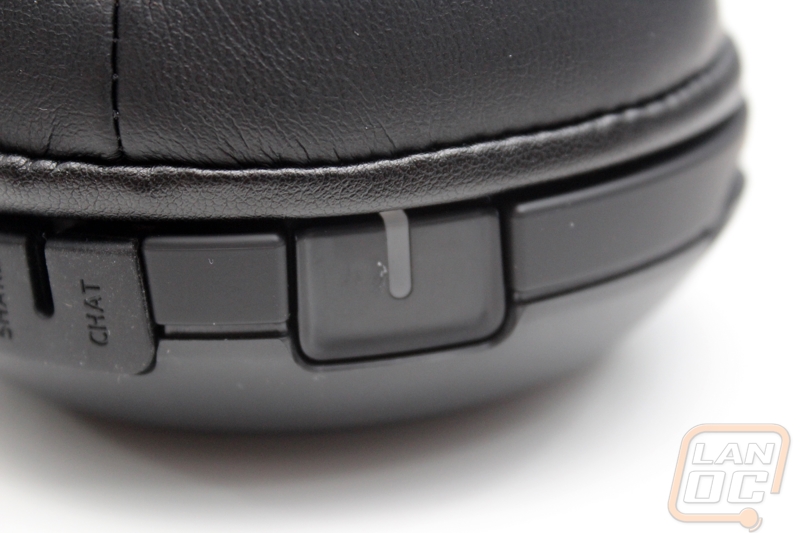 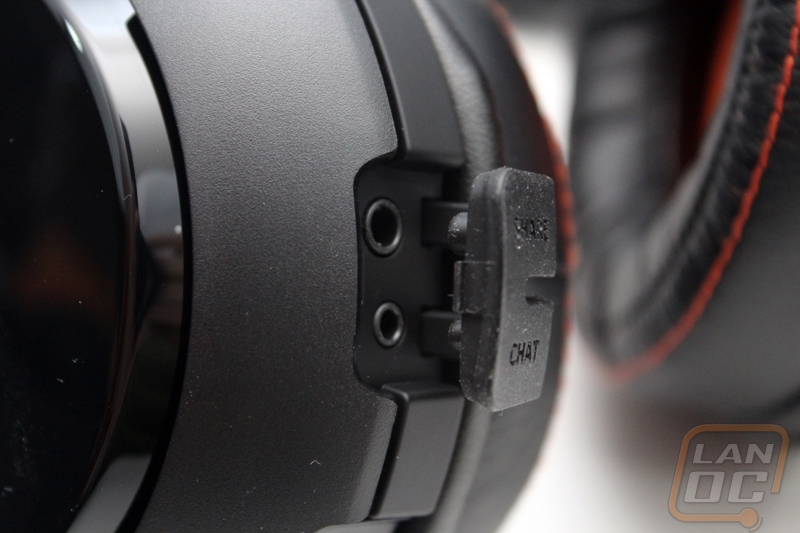 The other control built into the H Wireless is a scroll wheel that lets you adjust your volume on the fly as well as flip through your different EQ settings by pressing the wheel in then scrolling through them. 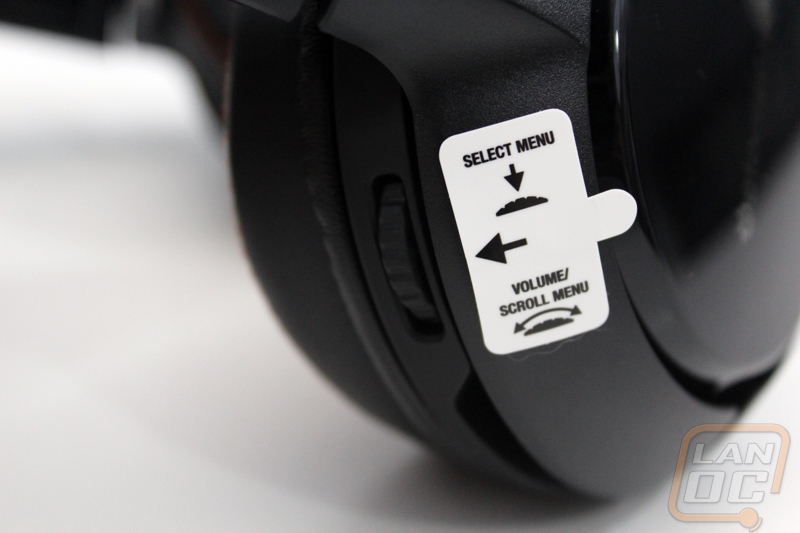 To remove the side covers off the H Wireless you have to give them a slight twist. This can be a little hard if you have oily hands because there isn’t anything but the glossy sides to give you traction. Under them you will find the battery on the left side and a USB port on the right side. The USB port can be used as a direct USB connection to your PC to avoid wireless all together and to charge the battery in the headset as well. I also like that they slipped in the winning is everything quote inside of each of the covers, a nice touch. 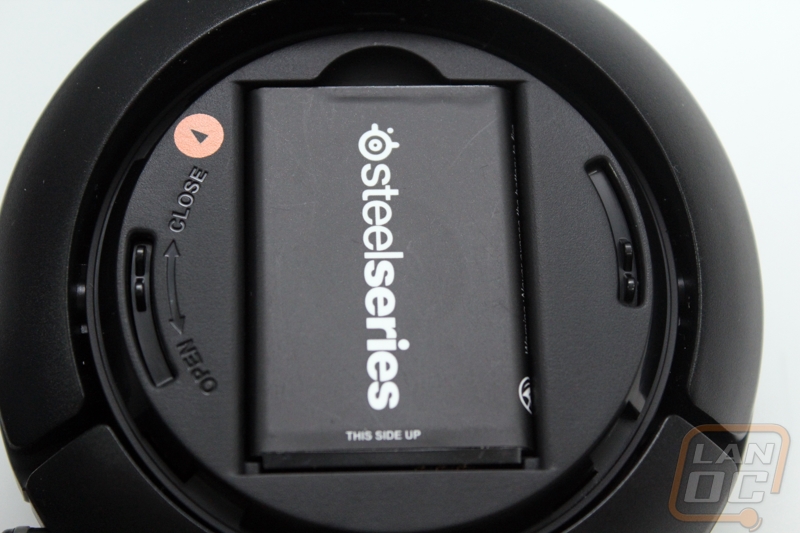 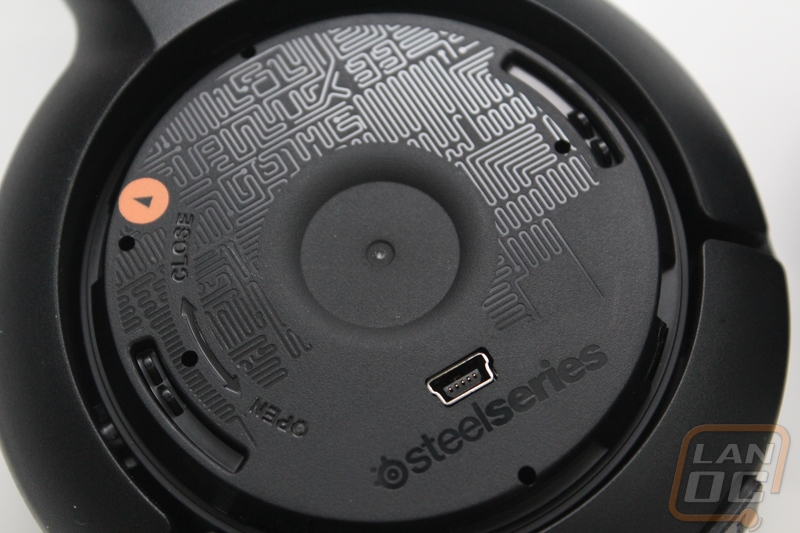 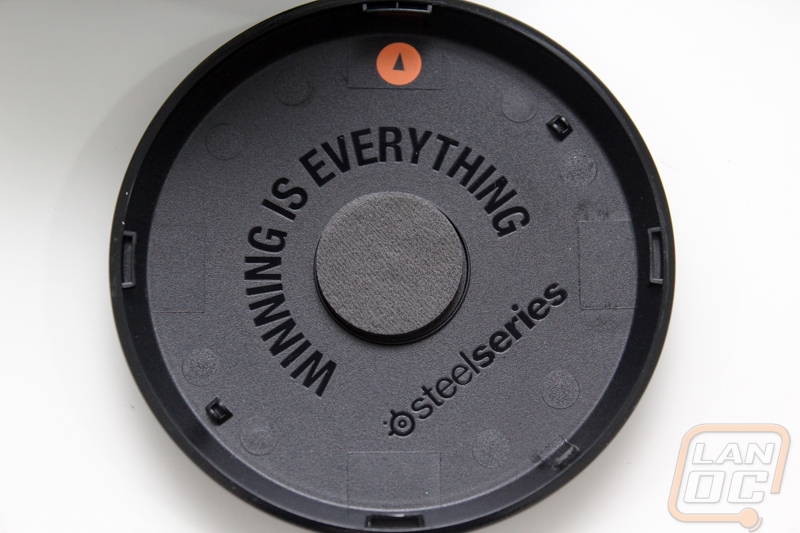 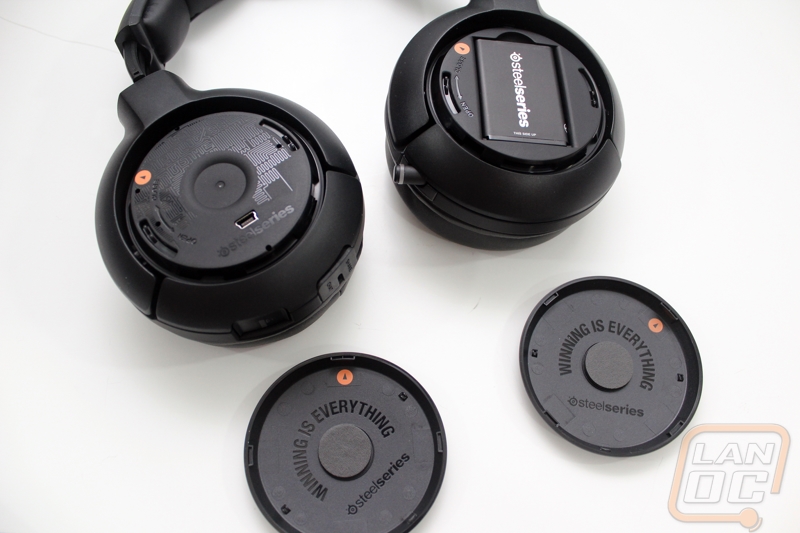 Along with that its also the day we get to take a first look at the new H Wireless from SteelSeries. Enjoy and have a great day
Read More...