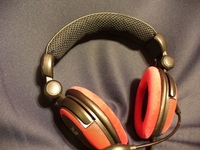 We have reviewed a few headsets in the past and im sure we will review many more in the future. This is because as far as peripherals go the idea of a perfect headset ranges very widely from person to person. Everyone prefers a different size, shape, color, materials to make it comfortable for them. Not to mention the WIDE range of variables in everyone’s idea of good sound quality. Today we are going to take a closer look at the Sonar 5.1 headset from Cyber Snipa. We are going to find out if it is the perfect gaming headset for people who prefer “over the ear” headsets (me). 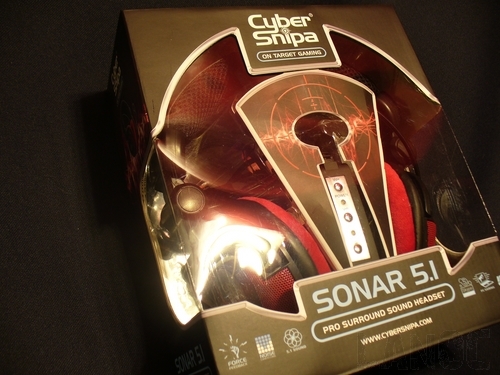 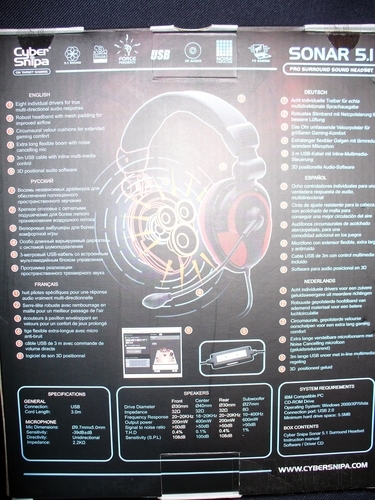 The Sonar 5.1 comes in a black card board box with a very large window in the front to show off the headset. Under the window you will see a few logos showing off the key features of the headset. Specifically, Force Feedback, Noise Canceling, 5.1 Sound, and USB. All in all the front of the packaging is fairly simple, eye catching, and shows you almost everything you need to know about the headset. Everything else you would be interested to know is on the back of the packaging. They have included a few headset features in 6 different languages. At the bottom they have all of the specifications, along with the system requirements. Inside you will find the headset packaged in a formed plastic tray along with an instruction manual and the required driver and software disk.

Installing the Cyber Snipa is as simple as plugging the USB plug into your PC then running the included software. Once you install the software and restart you are all set. You can now go into the software and tweak and change the sound to just about anything you would like. To start you can set the headset up for inputs from anything from 2Channels (mp3’s) to 7.1 (games). The Mixer tab is where you can adjust volume settings for the headset and microphone; these settings are attached to the windows volume control. The Effect tab is where you will end up spending most of your time when messing with the sound. You can add an environment sound effect if you are a fan of the different echo’s and whatnot. Not a feature I would miss if it was gone, but fun to mess around with sometimes. I would be upset however if they took away the included Equalizer. Even though I don’t think some of the pre made buttons improve the sound of the music type they were named after the equalizer itself is wonderful to have. I was able to bring the headset to life with a few tweaks. Once I was done I was able to save the settings to use them later on. 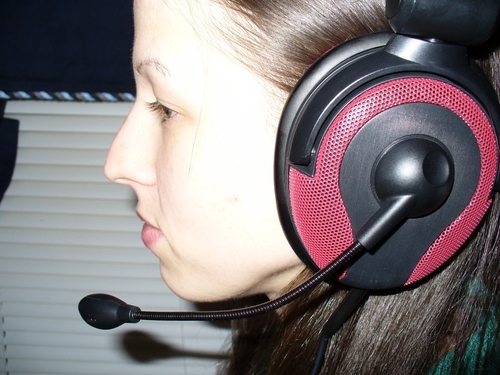 Please understand that I am a fan of over the ear headsets. Any other type of headset isn’t comfortable for long gaming sessions. After putting the Sonar 5.1 to use for a long period of time I found it to be very comfortable. The plush ear pads are amazing! They are soft when you first put them on, but they never get hot after hours of gaming. The mesh covered headband also keeps the air flow nice, although I would have preferred the headband to be self adjusting similar to on the Razer barracuda headset. The microphone is fully adjustable but not removable like the microphone on the similarly looking Tritton headset that we reviewed last week. Lastly the ear cups can be spun 90 degrees making it easier to get a perfect fit.

Before I dive into the sound portion of things I would like to point out that I am not a trained expert or any sort of Audiophile. I am a computer geek than enjoys listening to his music and playing games. With that being said, I really do enjoy the sound of the Cyber Snipa Sonar 5.1’s. While flipping through my last music collection I wasn’t able to find a song that sounded bad. What issues I did find where quickly fixed with an adjustment or two in the equalizer. As we have talked about before, gaming headphones will never perform up to the level of music headphones while playing music. They are limited by their multiple (in this case 8) speakers to create the surround sound for gaming. Considering that they performed great. 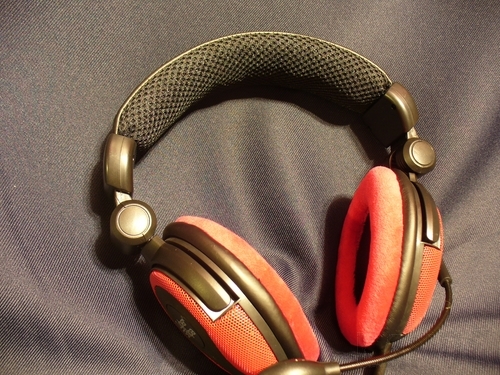 In order to really test out the Sonar 5.1’s I jumped right into some gaming. Playing COD4 I was able to clearly hear things around me and the direction the sound was coming from. Being able to know someone is coming before you can see them can be a major advantage in game! I found the microphone to work well, it wasn’t necessary to boost the signal to make sure everyone could hear me clearly. In game I also found the in line controller to be very useful. You can mute the microphone along with turning the volume up and down. One issue I did notice was that everyone around you will clearly hear whatever you are playing, open air brings the best sound quality, but you pay for it with the sound pollution to the person next to you. 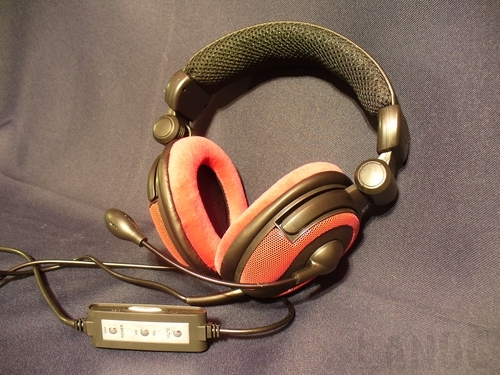 For some reason the camera couldn't capture the color of the headset well in some lighting. They are a lot darker red than this picture shows.

A headset is a very important part of gaming; you want to make sure you have something that fits you perfectly. The Sonar 5.1 is a great choice for people who are interested in a USB over the ear headset. The red color isn’t too bright, but is enough to keep the headset from looking dull. I am a little curious as to how much this headset has in common with the Tritton headset we reviewed last week. The headsets look almost the same other than the interface that it plugs into, the mic, and the color. Not that it would be a bad thing to be a more mobile version of that headset, as you may remember that was its only downside. One of the problems I’ve found is in order to use the headset once its plugged in you have to close any program that you are already running to get the sound changed over to the USB. This I’m sure is a vista only issue, but I don’t have a problem like that when using a standard headphone jack. I also think that the inline volume control feels a little cheap but it does do the job. With that being said, the Sonar 5.1 is an amazing headset that I would recommend to anyone looking for a USB interface headset. 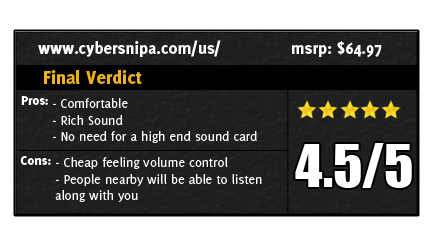 You might call him obsessed or just a hardcore geek. Wes's obsession with gaming hardware and gadgets isn't anything new, he could be found taking things apart even as a child. When not poking around in PC's he can be found playing League of Legends, Awesomenauts, or Civilization 5 or watching a wide variety of TV shows and Movies. A car guy at heart, the same things that draw him into tweaking cars apply when building good looking fast computers. If you are interested in writing for Wes here at LanOC you can reach out to him directly using our contact form.
Discuss this article
Log in to comment
Posts in discussion: Cyber Snipa Sonar 5.1 headset