For performance testing, I basically started in immediately after getting the MK2S up and running. I started by printing a 3d benchy but it failed. My next print was a pegboard hanger that I needed for my workbench to hang up my new Anemometer (wind speed readings). This one worked but as you can see there was still something a little off. Because of that, I started checking things and I found that the extruder was over-extruding. This gave us the thick layer lines. I measured out 100mm’s of filament, set the MK2S to extrude 100mm and then measured how much farther it went. With that, I did the math and adjusted the extruder down.

While doing all of that I was going to try one of my other filament colors out but I found out right away that the spool holder up on top of the printer wasn;t going to work for me. Basically, it uses two small nubs to hold on to the spool and this works well with what the printer came with. Most of my spools have a large hole on one side and a small hole on the other, so they wouldn’t sit on this setup. I searched around and found a hanger design I liked and printed it. The design required supports so it gave me a good chance to check out how well the Prusa works with supports. The answer was really well. 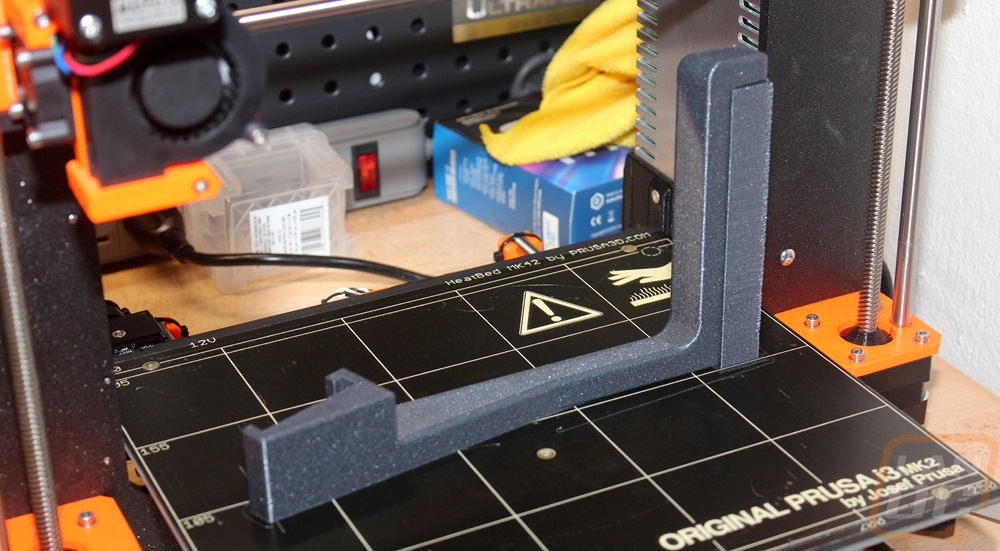 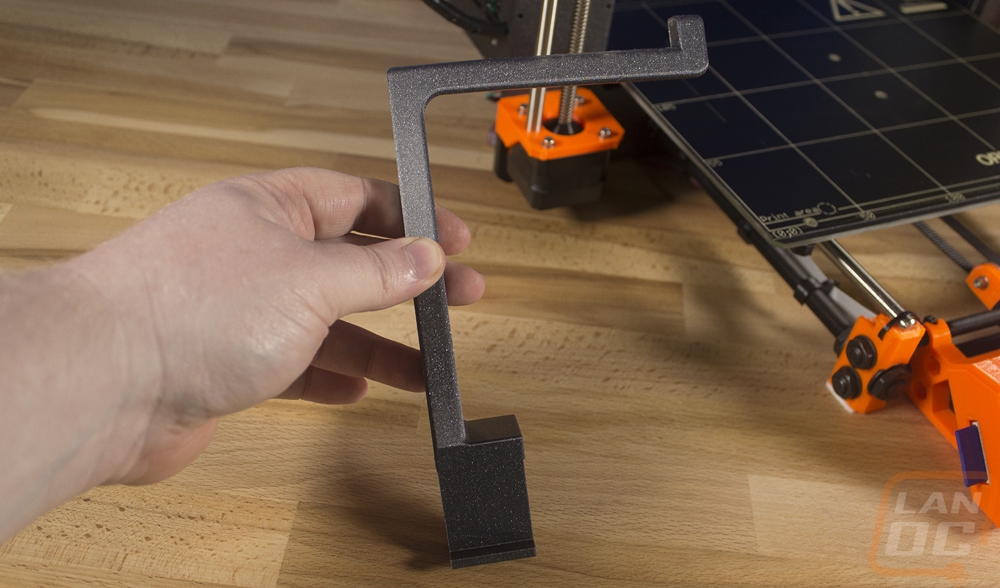 Sadly though this hanger design, while good, didn’t work for me. It was a touch too lose and would lean because of that. Then the plastic itself wasn’t strong enough (not enough infill) so it would bend even more. Each print I would put the spool all the way to the left and it would move over and almost fall off each time. Because of that, I found a new design that used the original spool hangers. This design sets the original hangers out wider to fit any spool then slides over top of them giving a rod for the spools to spin on. Let me tell you, it has worked well through all of my printing. 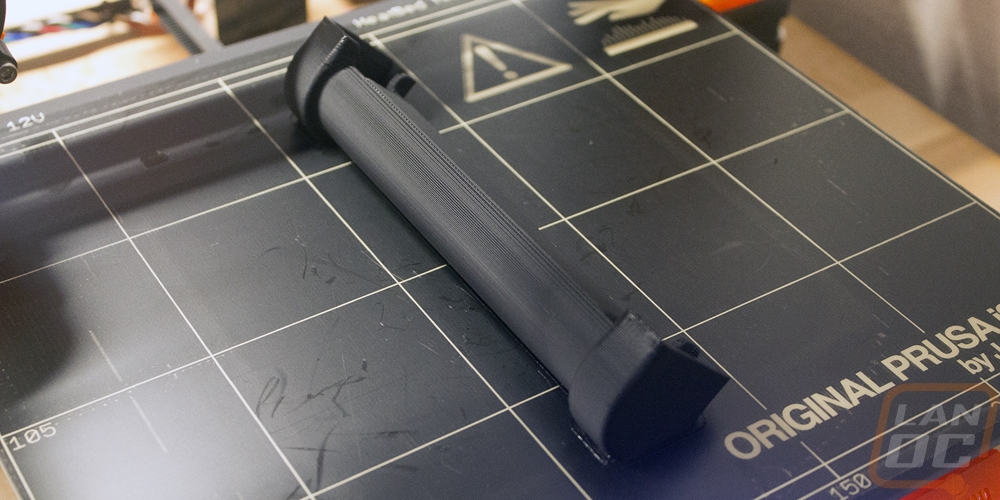 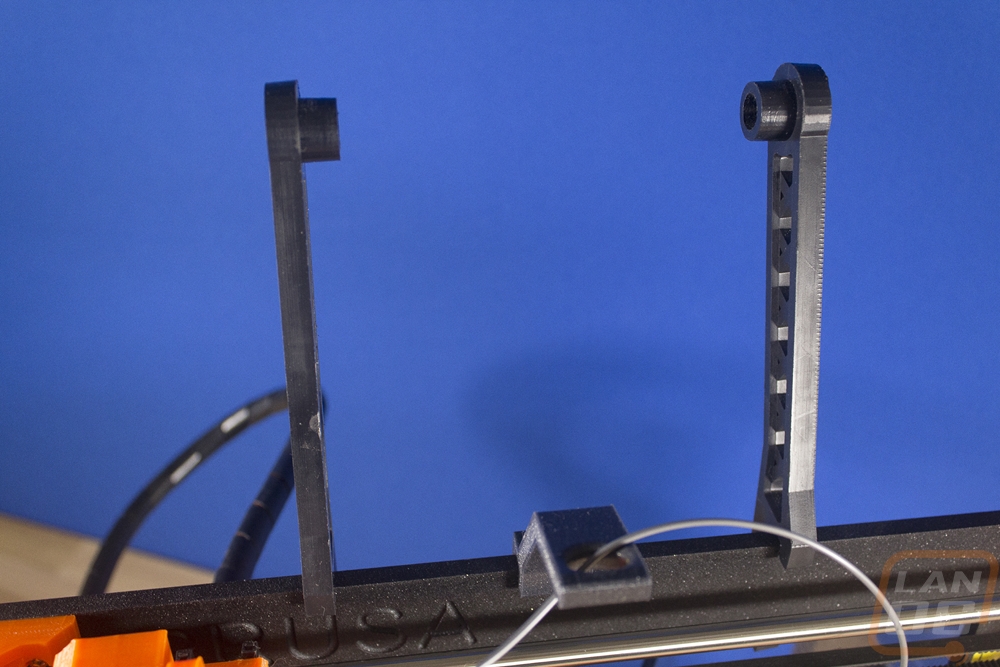 For those curious here is what the spools look like that caused me issues. 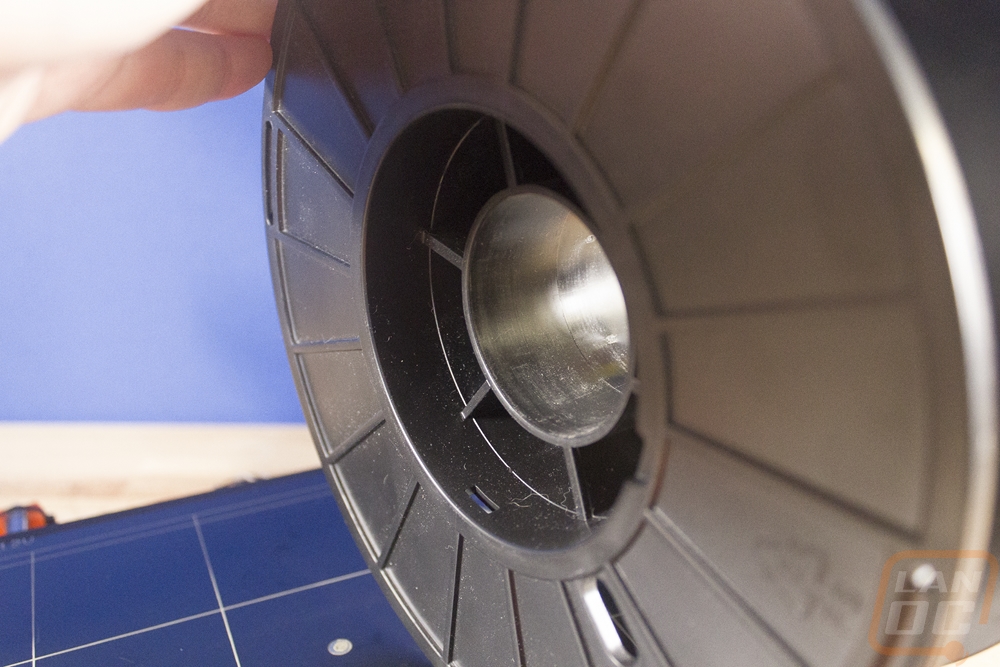 I did run into another issue that required another part printed as well. Because of how close the spools hang from the top of the printer and because of how high up the extruder goes when you print a tall print you end up with the spool pulling grabbing and causing the extruder to not be able to pull enough filament when printing. Here was a large print that it tugged and did this about an inch from the top. There are other issues with the print, I will get to those here soon, but look at the really thick lines just above the eyes and about two inches above the first line. 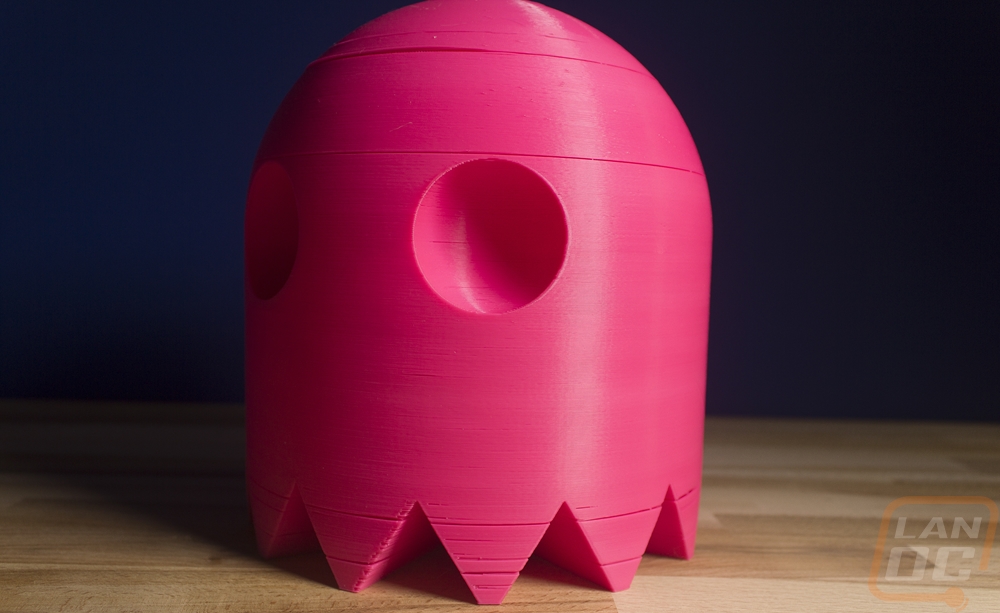 To fix this issue I printed a filament guide that clips on to the top of the printer, keeping the line coming off of the spool centered. This design worked but there are a few others that will work as well. Using a Bowden tube would also fix this issue, but I actually found it really nice to not have to feed filament through a tube each color change so I did try to avoid adding it back. 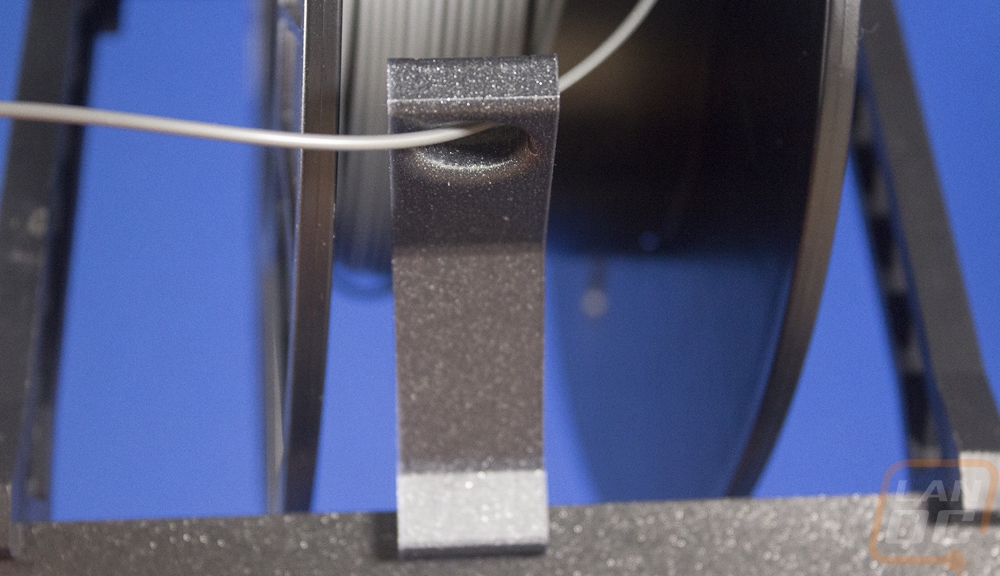 So I finally thought I had everything running smooth right? Well not so fast, remember the lines along the bottom of the huge packman ghost. Well, I couldn’t pinpoint the problem at first and it started to get worse. What was happening was anytime it would retract it would start to jam then clear up and print fine again. So things with a lot of retraction would get small sections of under extrusion. Check out this benchy. 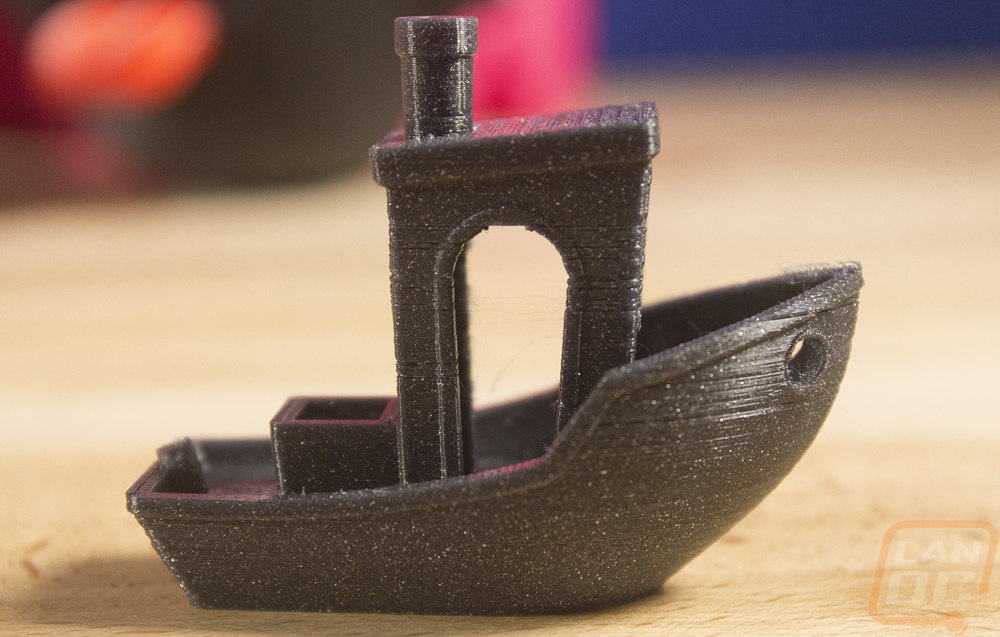 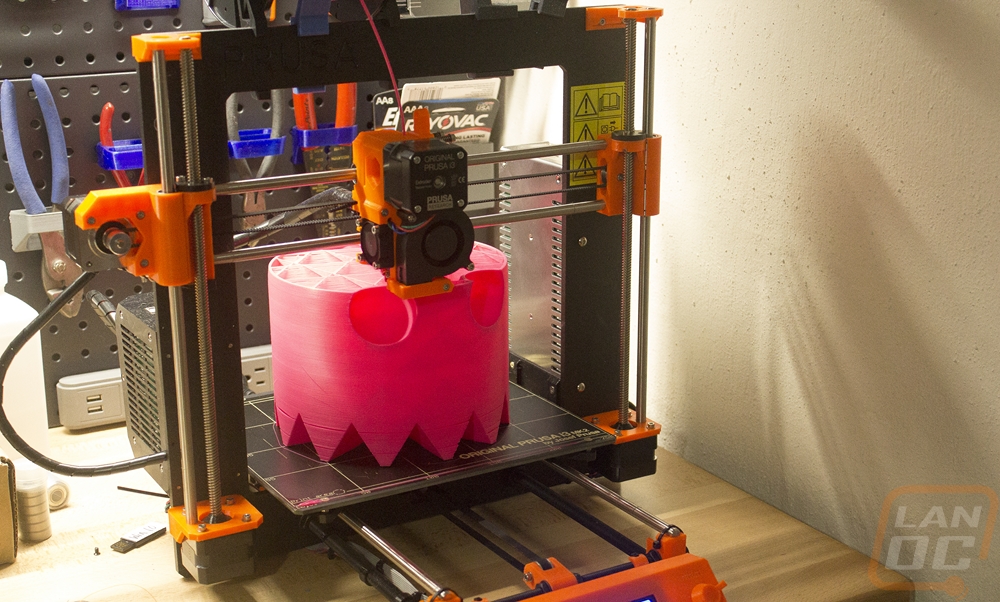 It got really bad when I needed to print a memory tray for Gigabyte and around the same time printing fidget spinners for my niece and nephew. I just couldn’t figure it out, it seemed like a retraction issue but I was running stock settings. I reached out to Prusa support and they gave me a list of suggestions, all things that I had already done. Then I started looking into what my retraction setting should be. People including Prusa were suggesting nothing over 1mm but for some reason mine was set to 4mm. As it turns out, at the time the Multi Material upgrade used the same shortcut and it was giving me the settings for it. Updating to a new version of the software got me back up and running with the proper retraction setting.

Here is a correctly printed memory tray that I made for our friends over at Techgage.com

It was at this point where I really started to go crazy printing. I had basically been dealing with big and small issues for a month and a half between waiting on the LCD screen in the build, the extrusion setting, the retraction setting, the spool holder, and the filament guide. So with it running good, I had so many things I wanted to print. Sorry about all of the photos. 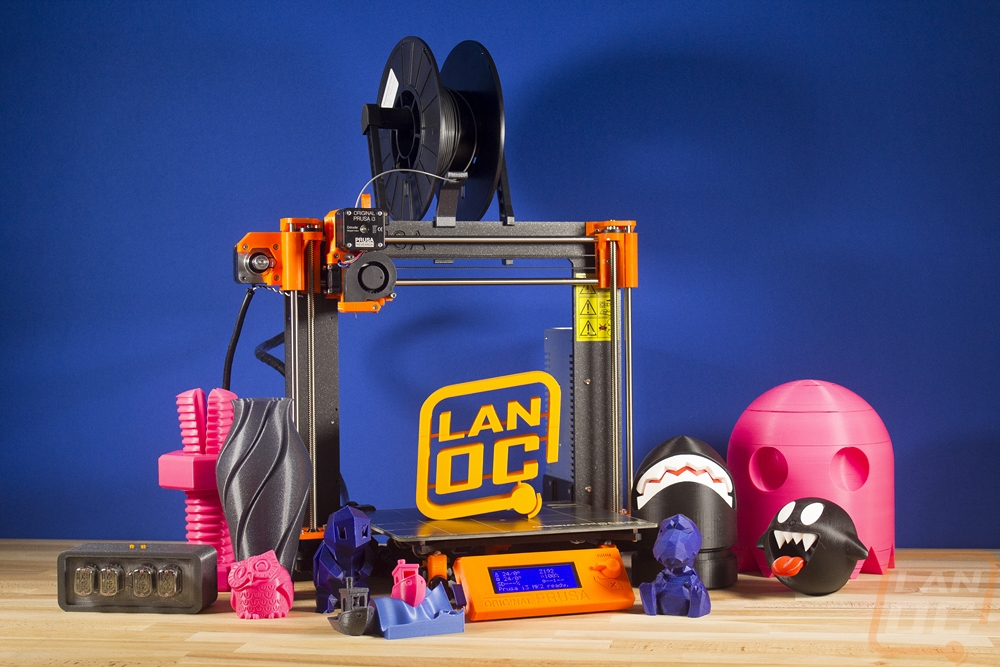 Here is a benchy with the issues fixed, running completely on stock settings. My bottom layer is a little smushed, but that is how I prefer it to be. The sides of the boat are smooth, the stack is perfect meaning cooling works well, and even the arches and window look good. The only issue was a slight bit where the plastic doesn’t touch the anchor hole in the front. 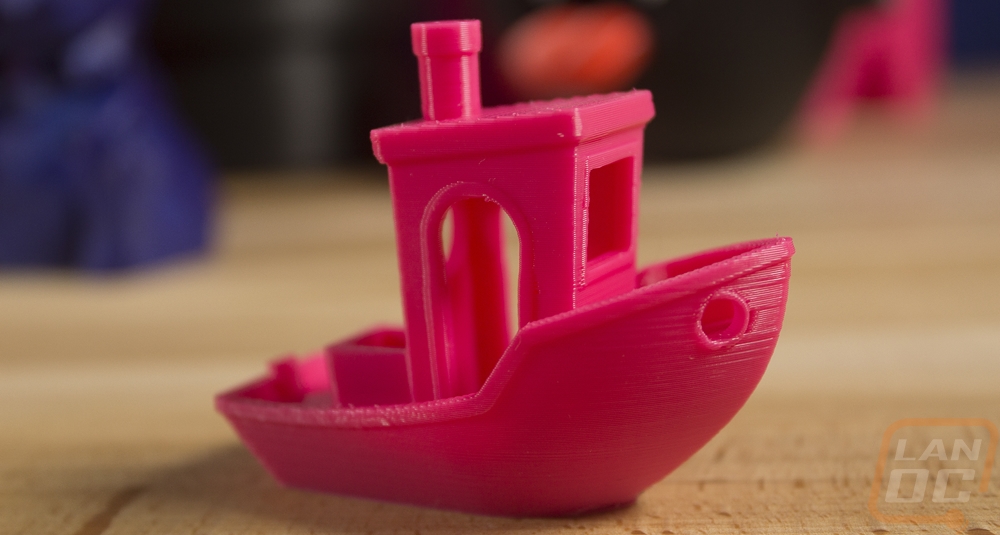 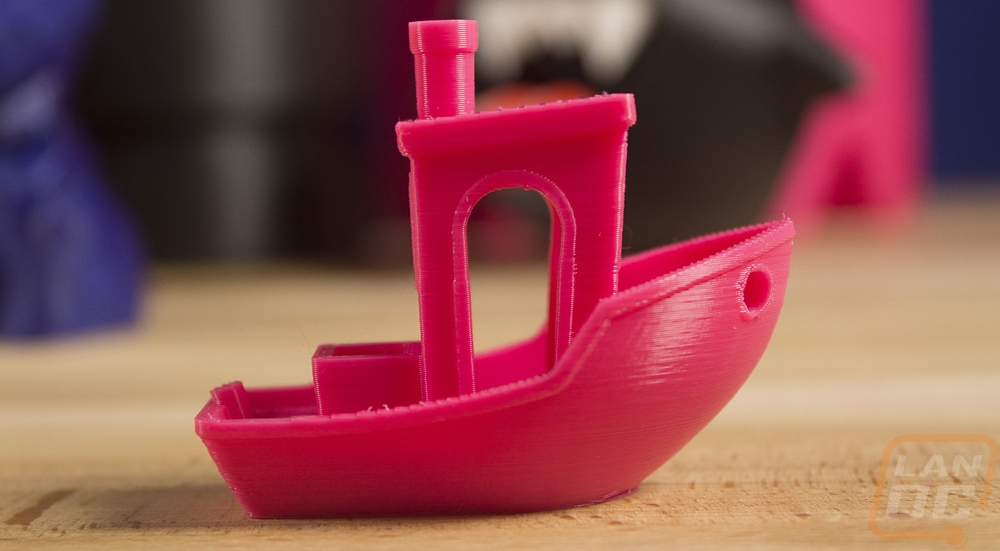 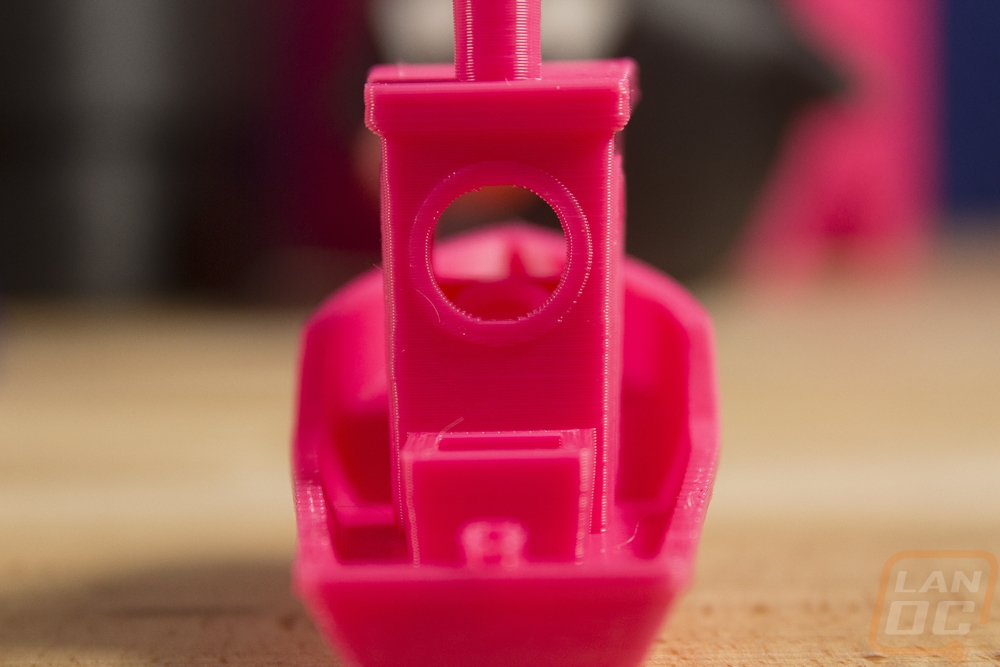 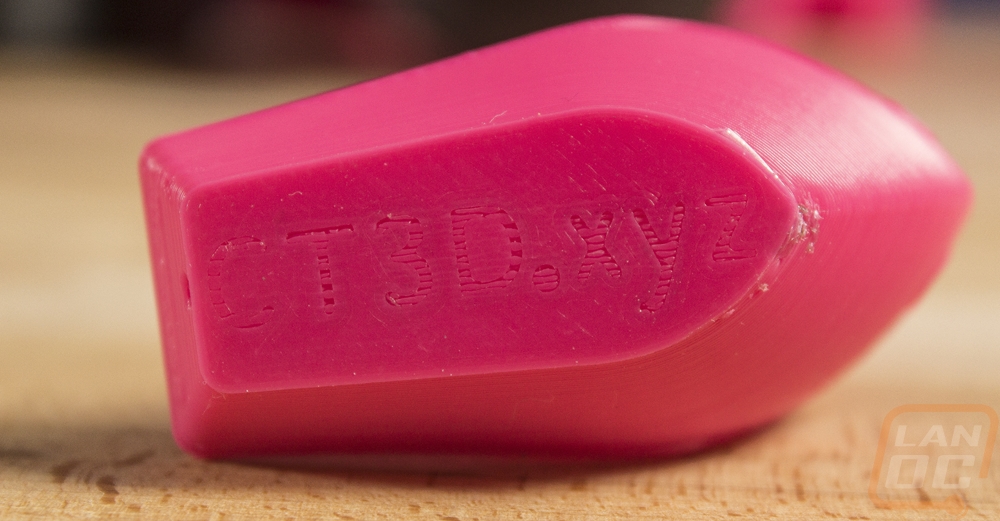 You guys might remember the clock from my Nixie clock article. I printed all of the original parts on that on the Prusa. The clear front panel in the picture below was done on the Rostock though. 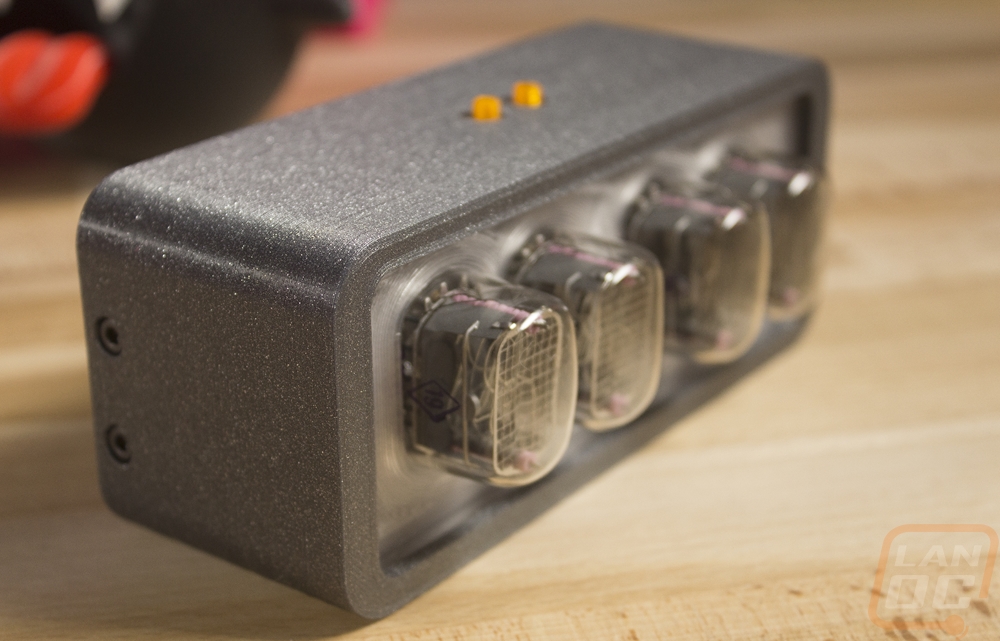 The filament that Prusa included with the printer was amazing, I’m really in love with this Vertigo Gray. It has a ton of flake in it, I just wish I had more. It really brings out curves in your prints. Especially this vase. 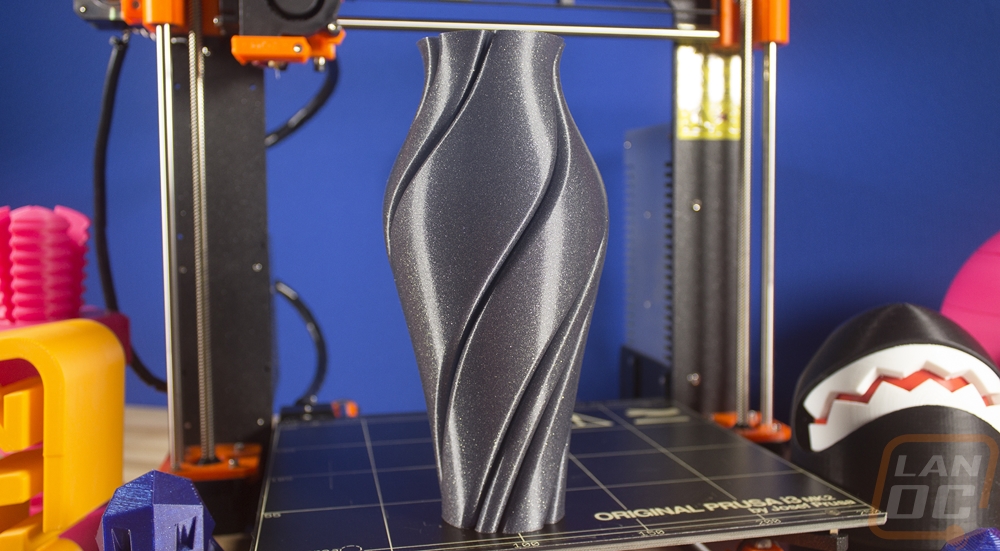 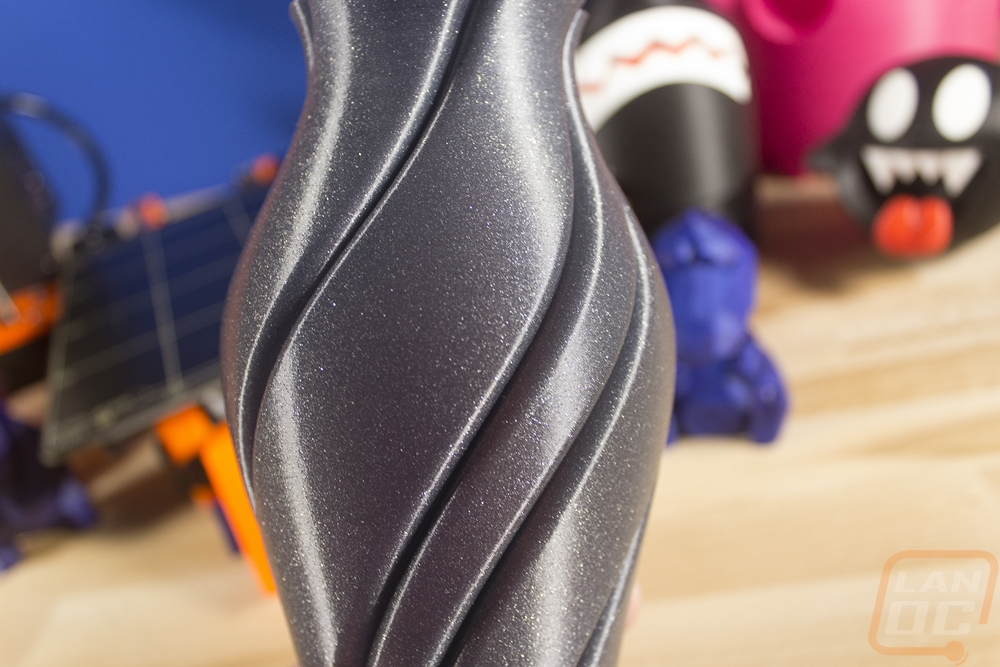 What really surprised me was the build surface though. In all of my prints, I only had a few times where things didn’t stick to the bed. In fact, more often than not I had a hard time getting prints off the build plate. This was without using the including glue or hair spray like I normally use. I just cleaned the surface any time it got my oily finger prints on it. Check out the bottom of this bullet build print. This print, by the way, came out amazing with its three colors! 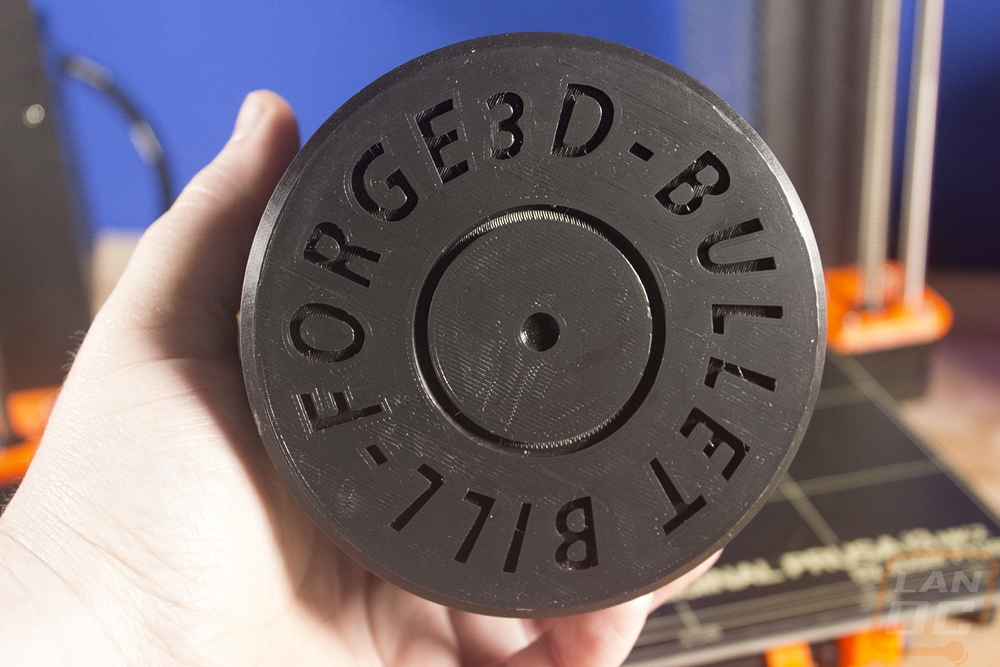 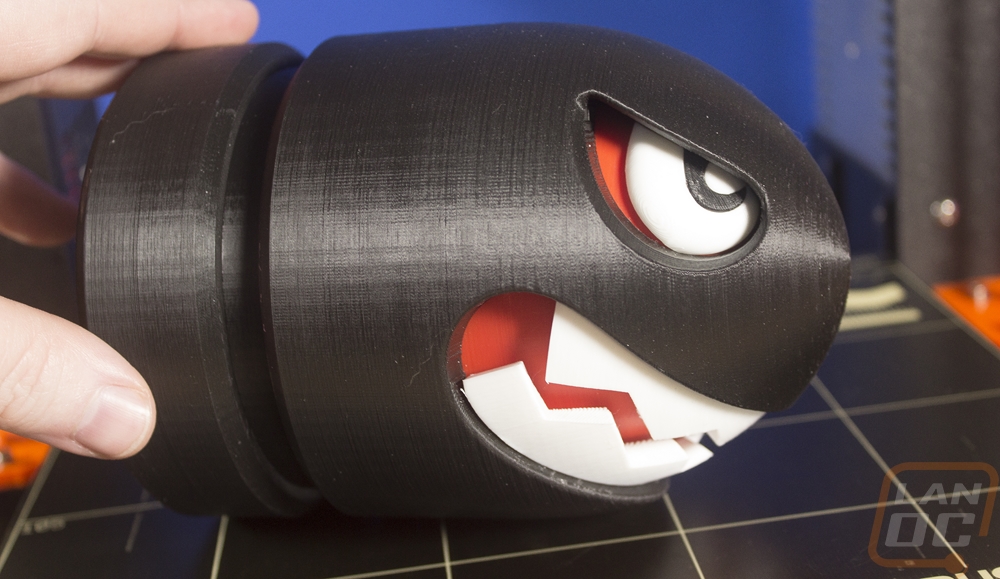 The Boo came out great as well and stuff like its tongue only had a small surface area to touch the build plate. 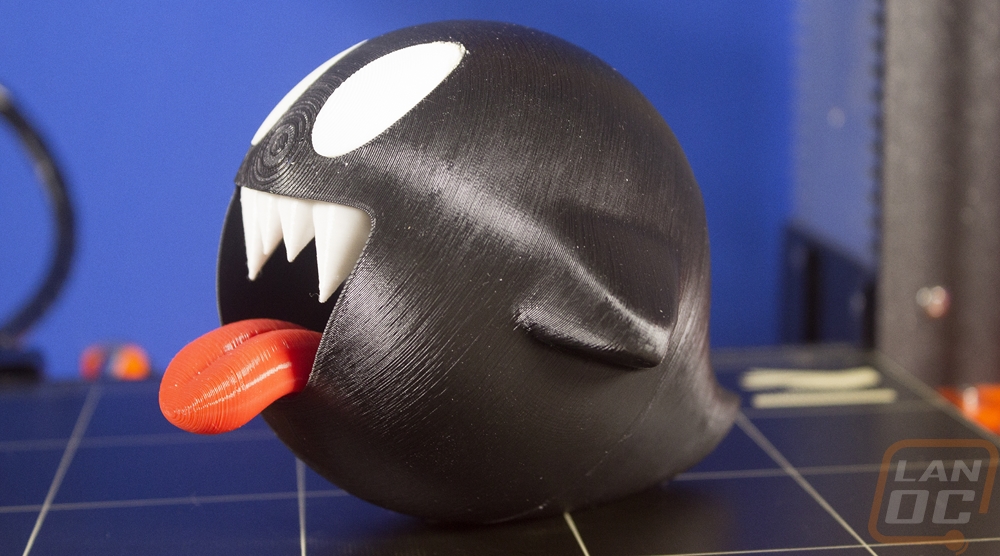 Now as always I was printing trinkets at my wife’s request all of the time. She loves owls, so I printed this one in the Prusa pink. 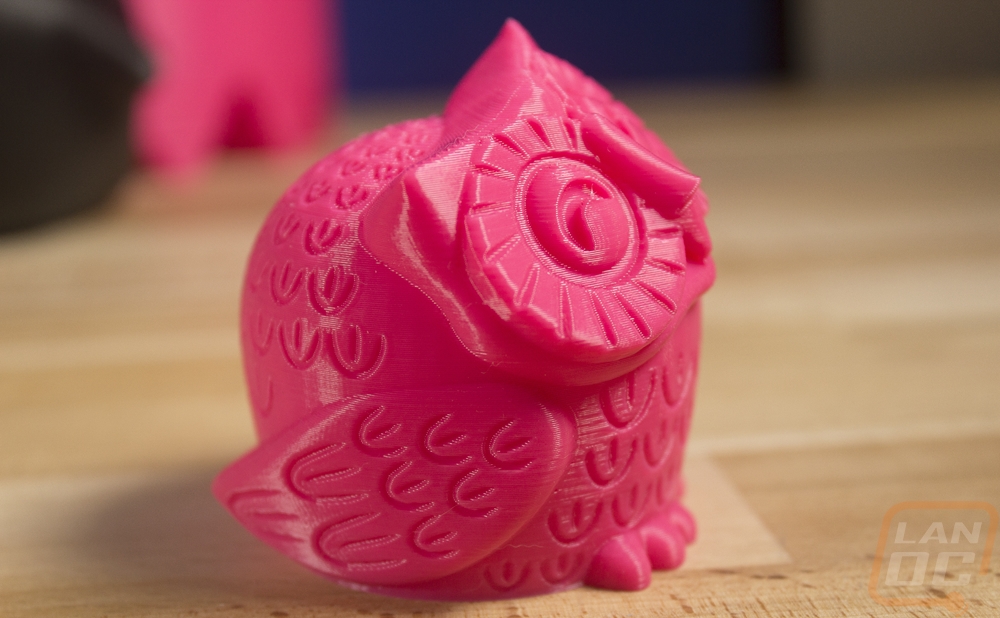 Then just a few days ago I printed both of these in the Atomic Filaments transparent. It is called Starry Night and it looks amazing. The Dino required supports and I was really worried that they wouldn’t work with a completely new filament. The teeth all had supports and came out great. Under the chin looks a little rough though, a little bit of drooping. The Squirtle, on the other hand, didn’t need supports and came out perfect. There were a bunch more that I printed, but honestly, I couldn’t find them all when trying to get photos of everything. 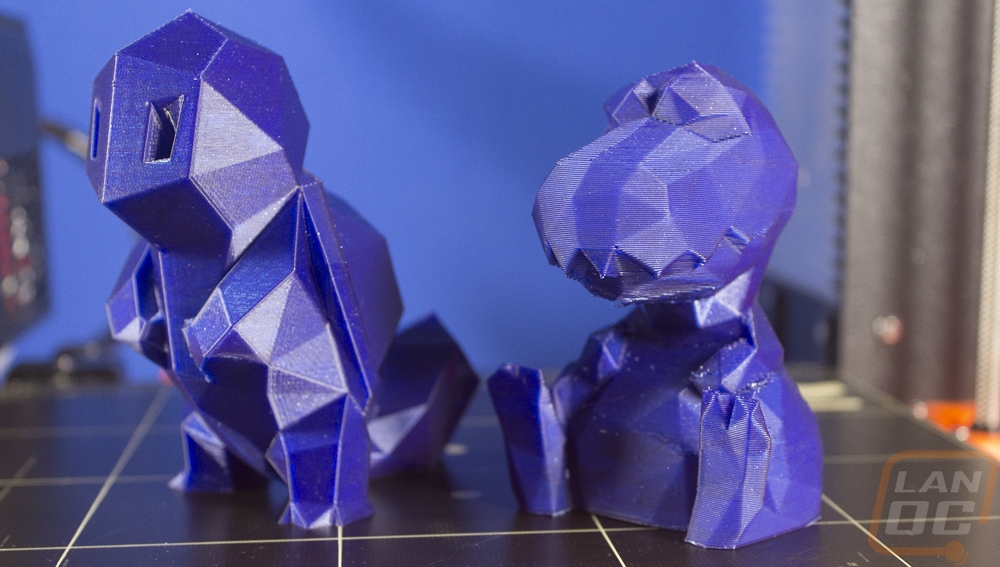 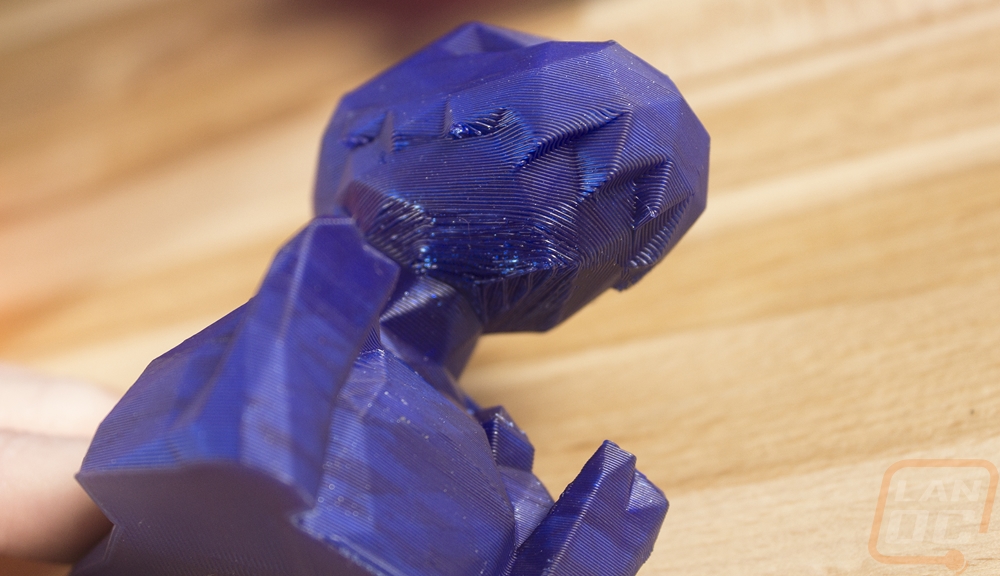 I did slip in a large LanOC logo and this print wasn;t looking 100%. For starters, my original design needed to be rotated and Slic3r wouldn’t do that. I tried to rotate it in Fusion 360 but even with 360 in the name rotating it wasn’t easy. So the file ended up slightly off, I think this played a role in the way the sides looked but I also think I need to add an additional outer wall, some of the lines were from the infill. 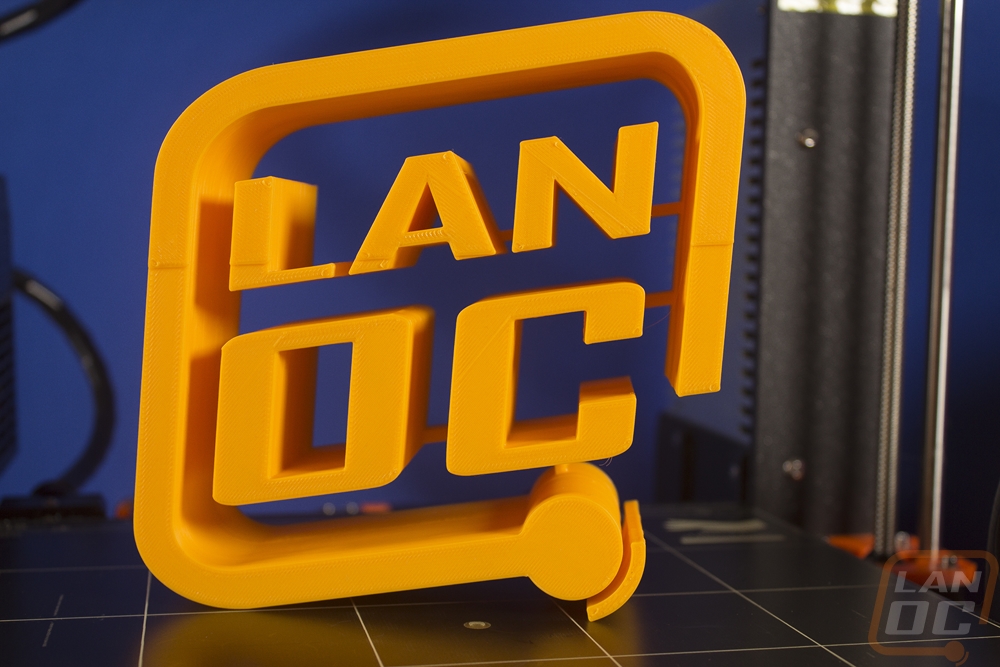 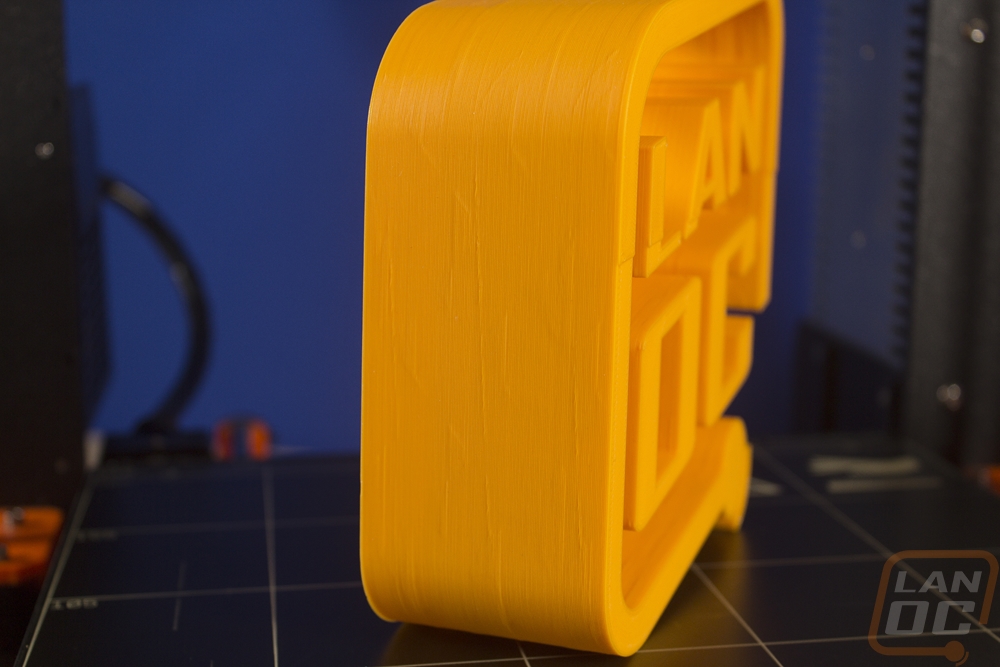 Last but not least I went back to a classic, the impossible nut. I printed this one because I wanted to see how well the printer would handle the joined together surface between the nut and the bolt. The end result was perfect on the top of the bolt. The bottom of the nut looked good as well originally. It had a single layer of what looked like a raft. When I tried to take it all I ended up making it look worse as you can see below. The print still works great though. 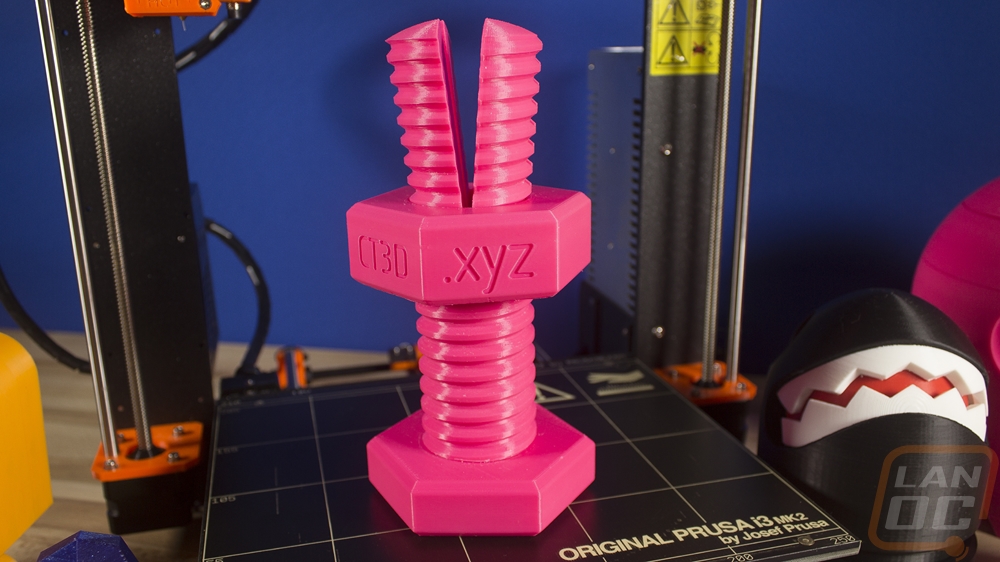 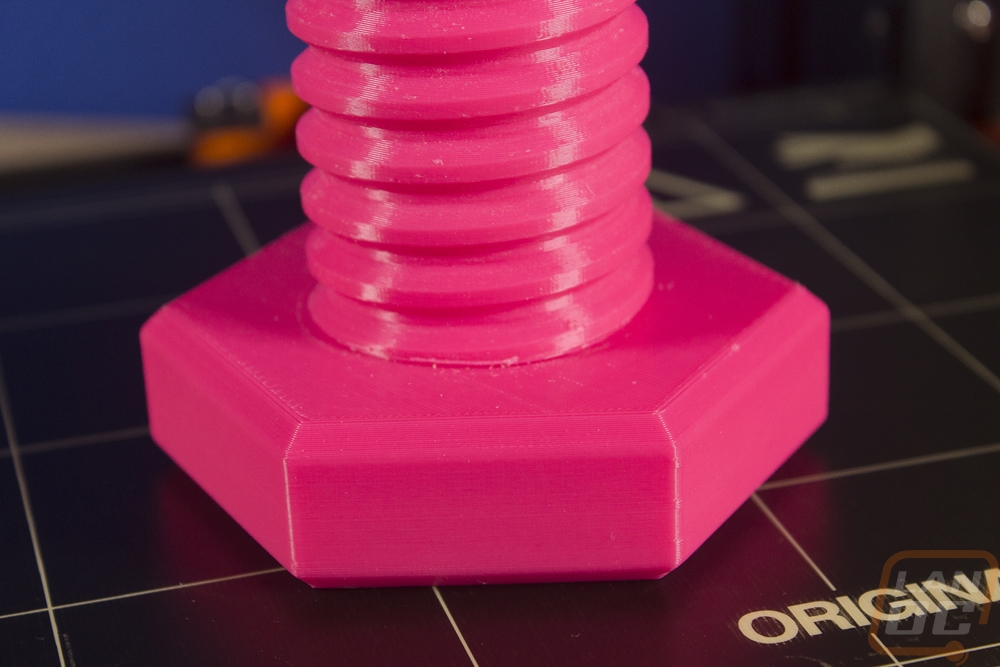 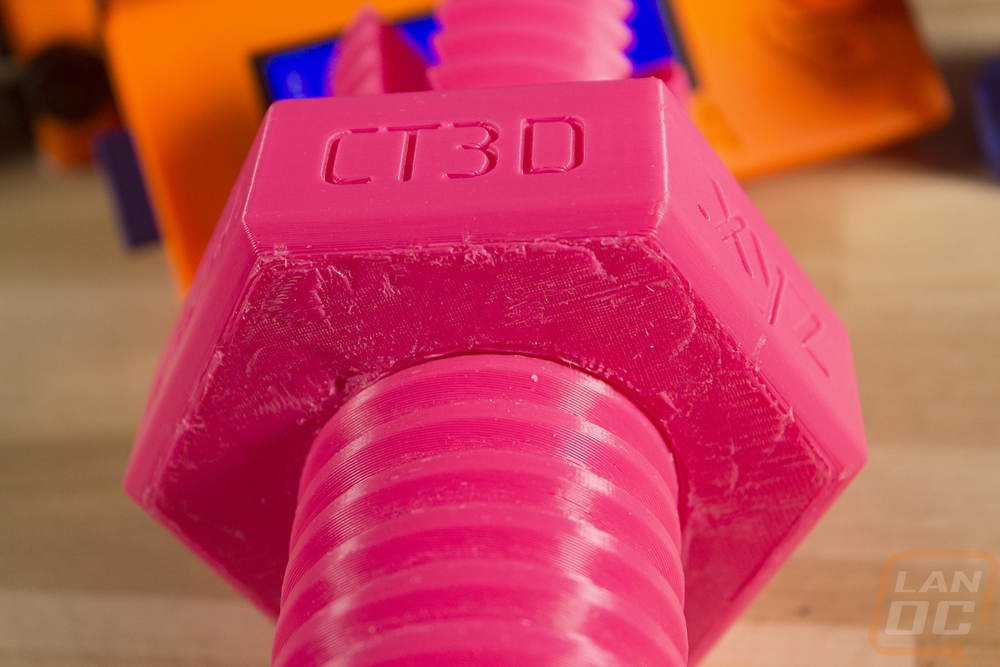 As for other aspects of performance before I went off on a picture filled rant about the prints I have done on the Prusa. There were two things that I was curious about. Deltas are known for printing much faster than Cartesians but people say the gap is smaller now. I can’t confirm if the gap is smaller now, but there is still a big gap. Having been using Deltas for over a year now I noticed right away that the prints took longer and the movements are slower. With the extruder mounted right on top of the hot end and the stepper motor for the X axis also being lifted there is a lot more weight to be moving around. Same goes for the bed, moving the bed forward and back takes time where a Delta has a solid bed and moves a light weight hotend around.

The other aspect that I was worried about was noise. My Rostock sings the song of its people, aka the stepper motor noise in addition to loud fans. Of my two Eris, one has loud fans as well and both aren’t exactly quiet on the steppers as well. The Prusa i3 MK2S, on the other hand, was surprisingly quiet. There aren’t any enclosed areas so they don’t need fans for the power supply enclosure and for whatever reason they don’t need a fan for the RAMBo as well. So it is just the two fans on the hot end and they are quiet. The stepper motors were also very quiet and that is without running in quiet mode that some people say causes skipped layers. The only noise I ran into was the bed bearings sometimes making noise when it gets moving quickly.

We have 946 guests and one member online