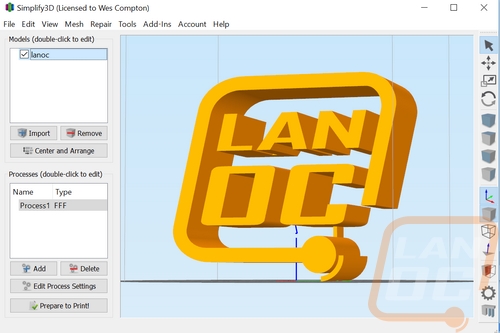 So at the end of the day, Simplify3D answered a bunch of questions but also left me with a few more. Going in, I had heard good things about the software but wasn’t really sure what to expect. MatterControl had basically been my only interaction with 3d printers and I was really comfortable with it. That said there were night and day differences between the two programs. The speed and smoothness of Simplify3D being the main one. I was able to make changes and modify things right in the software when MatterControl had a pop program that required you to save the file then go back and open it back up in the software. Things, like rendering the 3D models and creating the G-Code to print, were instant on Simplify3D where it would sometimes take 5-10 minutes on a big file for MatterControl. But I was also impressed with the additional controls for supports, being able to add or remove them on the fly, and also being able to see them without generating the G-Code. Then of course with the level of options in the settings pages, I found out I could have even more control over my prints. But it was the slicer performance that improved the vertical banding that made me the happiest.

All of that control did, however, come at a price. Simplify3D isn’t the easiest for a new user to jump in and use. While they do have a quick setup for most printers and a basic mode as well, just navigating the settings menus didn’t seem to live up to the standard of the rest of the software. Especially when dealing with print speeds where a lot of the settings are based on percentages that will have you flipping back and forth between pages. The integration with the printer controls was also a little lacking. If you print from the software you have to go through the menus and find the printer controls to check your temperatures or to even stop the print at all.

All in all the software is great, though, even the navigation issues stop being an issue after you use the software for a while. However, at the end of the day, I did have to do a little extra reflecting to figure out if I felt the software was worth the month. You see, with the price at $149, Simplify3D hits you in the wallet a little when you pick it up. This is especially true when you consider that most of its competition are free programs. Now I don’t think buying your software is bad at all, in fact for businesses especially its important to be able to rely on actual support and that is part of what you are paying for. I would just prefer the software to be a bit easier to use if I’m spending that much on it. Looking back I could still be happy with the free software, but you do get your money’s worth with Simplify3D. Especially if you are running multiple brands of printers, having a consistent program to use across all of your machines is a big plus. So for the hobbyist users out there wondering if you should switch If you have the extra money you will enjoy it. If you have to decide on filament or software, I would wait and consider it later on. 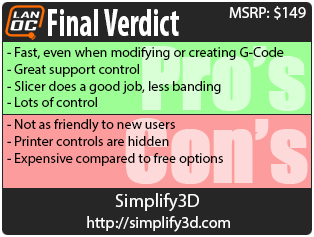