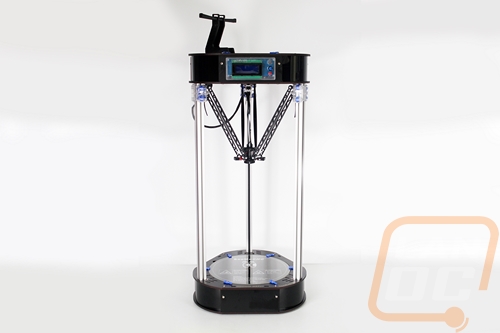 Well, two months and more filament than I can count down and I can finally say I’m finished up with my testing of the new SeeMeCNC Rostock MAX v3. I had a great time building it though I know not everyone will feel the same way. I learned a lot by building it and it is a great feeling when you get it all together and it works. While I never built a v2 for comparison, the v3 does have an improved design that allowed for a faster (although still an all day or more project) build time.

So how is the Rostock MAX v3? Well coming from the Eris, the build area was just mind blowing. I was a little concerned that the cylindrical shape would prevent me from fitting some things into the space, but I haven’t really run into anything that I needed or wanted to print that I couldn’t fit in the build area. There are options out there that have a bigger base, but the vertical print area on the Rostock Max v3 makes up for it. The new accelerometer based leveling system is also a big plus. I ran the code and had a perfectly level first layer immediately. There is still room for improvement on it though, I did have to tweak the z-probe height a touch to get the perfect thickness, but after I did I had no issues in the future. While I still prefer to print with PLA or a PLA hybrid material, I was really happy to see that the v3 could handle any of the other materials like ABS or flexible filaments.

The last big thing for me was the v3’s overall versatility in its design. SeeMeCNC did a good job thinking ahead and they designed the printer to be built with the electronics all in the top or in the bottom. They also included mounting options for a Pi inside and to go with the Pi they even have a hole for wiring up a camera to a Pi as well. Looking even farther ahead they also included the ability to add a second extruder for anyone looking to convert the v3 into a dual extruder setup in the future. There isn’t currently a Hotend design to go with it, but I’m sure the community will come up with something in the future.

As far as downsides to the Rostock MAX v3 I only ran into a few and they are all fixable depending on how far you are willing to go. For starters, I did run into some vertical banding on the prints. Nothing that most people would even notice, but it is there. Part of this was just related to the slicer used (in my case MatterControl) but it is also related to limitations of the Rambo controller board. An upgrade to a Duet board would make a big difference and I’m fairly sure SeeMeCNC has been working on future options there. While I was a big fan of MatterControl with the Eris, now that I have more time with it I do think there are a few limitations to the software. Specifically, I’ve run into crashes or slowdowns when it generates G-Code. On top of spiral mode doesn’t work that well and every once in a while I run into designs that just won’t slice correctly in it but work fine in other software. I’ve actually been trying out Simplify3D and I plan on writing more about it soon. The last issue I ran into was just with the fan in the base of the printer being really loud. I plan on diving in and putting a resistor in line to turn down the RPMs slightly to make it a little more livable in my office.

So at the end of the day is the SeeMeCNC Rostock MAX v3 the printer to get? Well, it really depends on your situation. With the kit selling for $999 it isn’t exactly the cheapest way to get into 3D Printers, there are a whole list of cheaper options if you just need a smaller printer. Where the v3 excels is the overall build area when taking into account the total height. Also, let's not forget watching deltas print is still basically magic. So the Rostock MAX v3 wouldn’t be my first recommendation for a first printer, but it is the printer you are looking at after your first printer. It rides the edge between hobbyist printing and commercial printing with good print quality, fast speeds, a big build area, by being available in a kit form to save money.

For me the Rostock MAX v3 is perfect though. It fits in my office where a printer with a wider footprint wouldn’t and I really enjoyed building it. In the future I can see myself digging in and doing a few upgrades but for now I’m going to have the v3 running nearly all of the time with different projects that I have in my head and with Christmas coming up I might print a few things to give to friends and family. Plus I love that SeeMeCNC is an American based company building nearly everything in-house, so props to them! 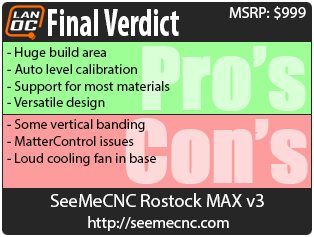