"The days flew by at Computex last week and we'd like to thank all of you who visited us at our booth – it's been great to meet you! For all those who haven't been able to visit us or who weren't at Computex, we've put up some photos and information about the upcoming new products we've exhibited at the show:"

"A-DATA Presenting the Killer Speed of 1TB SSD with Latest XPG™ 2.5" to 3.5" SSD Converter at Computex 2009 Taipei, Taiwan – June 4th, 2009 - A-DATA Technology Co., Ltd., a worldwide leading manufacturer in high-performance DRAM modules and Flash application products, presenting the killer speed of eight A-DATA S592 SSDs with XPG 3.5” converter configure in RAID 0 at Computex Taipei 2009. With the utilization of XPG 3.5” converter, the capacity can reach up to 1TB to perform 825 MB/s read and 1,115 MB/s write transfer rate. The eight A-DATA S592 SSDs adopting the latest XPG EX93 3.5” SSD converter, equipped with safety lock mechanism that can easily secure the SSD/hard drive in 3.5”drive bay without purchasing any accessories, to keeps the valuable data operate in a safety environment. This functional and worthful XPG EX93 3.5” SSD converter is the best choice for those PC user and enthusiasts. For more information about the latest XPG series products, please visit A-DATA booth at Computex 2009."

Working in concert with ASEtek, a worldwide leader in liquid cooling systems for high-performance computing, Corsair has developed an easy-to-install CPU cooling solution that outperforms stock CPU coolers by more than 30%. Utilizing a copper CPU cooling plate and integrated pump connected to a 120mm radiator and high-efficiency, low-noise fan, the Hydro Series H50 delivers superior cooling for higher overclocking performance and greater stability. Unlike traditional liquid-cooling solutions, the H50 is a closed-loop system that is supplied pre?filled and fully connected using low permeability tubing to virtually eliminate evaporation and leaking.

“Until today, most innovations in CPU cooling revolved around how to fit increasingly bulky and unmanageable heatpipe-based air coolers into a chassis,” said Jim Carlton, Vice President of Marketing for Corsair, “The new Hydro Series H50 changes the game, packing an incredible amount of cooling into a much more compact solution and delivering better performance than even high-end, dual-fan CPU coolers that barely squeeze into a system.”

Taipei, Taiwan R.O.C., June 2nd, 2009 – Corsair®, a worldwide leader in high-performance computer and flash memory products, today at Computex 2009 announced its entry into the PC chassis category with the launch of the Corsair Obsidian Series 800D. Flexible, roomy and sturdy, the Obsidian Series 800D full tower chassis was designed exclusively by Corsair and incorporates features demanded by the enthusiast market. “The Obsidian Series 800D is a true builder’s case,” said Jim Carlton, VP of Marketing at Corsair. “It will reliably last you through years of motherboard, power, memory, cooling and component upgrades, while its advanced features and superior cooling performance allows you to build your ultimate dream system.” The steel structure of the Obsidian Series 800D has a matte black coating both inside and out, and is finished with a brushed aluminum faceplate for a professional, high-end look. It supports up to five 5.25 inch and six 3.5 inch drives in total, is compatible with ATX, Extended ATX, and Micro ATX motherboards and incorporates advanced features that make it ideal for demanding system builders. These include four hot-swap SATA bays, a cut-out section in the motherboard tray for easy CPU cooler installation and a unique cable management system that decreases cable clutter to increase airflow. The tool-free design also allows for easy entry and simple installation of 5.25 inch drives.

Cooler Master has long built a strong reputation based on industry-leading designs in coolers and computer cases, while its power supplies have often been over-shadowed. Today, marks a new era in the company’s foray into the market of power supplies. With the UCP reaching new 80 Plus Gold specifications, Cooler Master has put itself at the cutting edge of PSU design.

"Best-in-class Premium GC-2 thermal compound enables an effective heat transfer and an asier application on CPU, VGA or even Chipset Cooler thanks to the GELID applicator. With a net content of 7g and a very attractive price the GC-2 provides a specific gravity of more than 2.8 g/cm³."

Carlsbad, Calif. –May 27th, 2009 – Razer™, the world’s leading manufacturer of high-end precision gaming and lifestyle peripherals, today announced the release of the Razer Sphex™, the first Gaming Grade Desktop Skin with a distinctive ultrathin form factor. “The Razer Sphex is a gaming surface that doesn’t compromise tracking ability or durability even with its slim figure,” says Robert “Razerguy” Krakoff, President of Razer. “We wanted to offer gamers a simpler and less expensive gaming-grade mouse mat alternative, while retaining extreme precision and a smooth consistent glide comparable to traditional gaming mouse mats.” Expect a review of this new mouse pad from us very soon! Until then feel free to check out pictures here 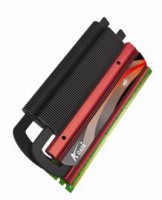 "Fremont, CA, May 21st, 2009 – Corsair® www.corsair.com a worldwide leader in high performance computer and flash memory products, today announced that the 6GB Dominator GT 2000MHz CAS 8 has passed Intel’s XMP-Ready certification for Core i7 Extreme Edition processors, making it the fastest memory kit to gain Intel’s stamp of approval. The 6GB Dominator GT 2000MHz CAS 8 (TR3X6G2000C8GTF) is part of Corsair’s award-winning Dominator GT line of hand-screened, hand-tuned, extreme performance DDR3 memory for Core i7 platforms. It is qualified and guaranteed to run at a frequency of 2000MHz with tight timings of 8-8-8-24 at a voltage of 1.65V. The platform used for the Intel qualification was an Asus P6T Deluxe." 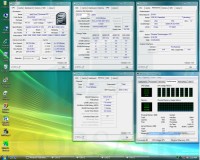 "Fremont, CA, May 20th, 2009 – Corsair® www.corsair.com, announced today that Corsair Labs has set the world record for DDR3 frequency on a Core i7 system.

Corsair Labs achieved an astounding speed of DDR3-2533MHz with the aggressive memory timings of 7-8-7-20 using a triple-channel 6GB memory kit. This new world record, verified and validated by CPU-Z, the industry-standard tool for verifying overclocking results, is the first time this frequency has been achieved on a Core i7 system with 6GB of memory using three modules; most world record attempts use only a single 1GB module.  Corsair Labs engineers used the award-winning Dominator GT 2000C7 memory with eVGA’s X58 3X SLI Classified motherboard to shatter the world record for memory frequency." 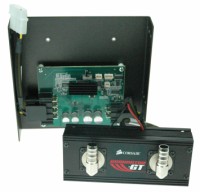 The new cooling solutions include the Corsair Cooling Hydro Series H30 water-block and Ice Series T30 thermo-electric cooler, which is capable of cooling memory to below room temperature for enhanced overclocking performance and reliability." 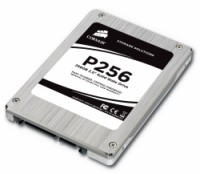 The Corsair Storage Solutions P256 has been designed using cutting-edge technology to deliver the highest performance and compatibility, in a capacity that is big enough to replace conventional storage solutions in a high-performance PC. The P256 uses specially selected Samsung MLC flash memory and a sophisticated Samsung Controller IC, coupled with 128MB of super-fast cache memory and Native Command Queuing (NCQ) support for blistering, stutter-free performance, delivering read speeds of up to 220MB/sec and write speeds of up to 200MB/sec." 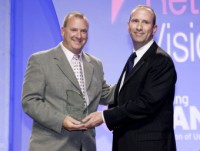 "Fremont, California, May 6th, 2009 -- Corsair®, a worldwide leader in high-performance computer and flash memory products, today announced it was honored with one of RetailVision’s coveted Best Selling Product Awards in the e-tail PC RAM Best-Seller category.

RetailVision Spring 2009, produced by Everything Channel, took place April 27-30 at the Boca Raton Resort in Boca Raton, FL. The award program was supported by research from The NPD Group, the leading global provider of consumer and retail market research information.
Corsair earned the e-tail PC RAM Best-Seller award for its 4GB XMS2 DHXmemory kit (TWIN2X4096-6400C5DHX), which achieved the highest sales totals in both retail and e-tail markets for 2008."
CLICK HERE to read more! 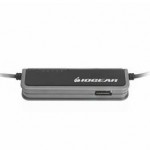 "The KVM is the latest innovation from IOGEAR, headquartered in Irvine, CA IOGEAR is a leading connectivity manufacturer that provides complete KVM (Keyboard, Video, Mouse), Connectivity, Networking, Digital Audio/Video, Mobility, and Desktop solutions. The first of its kind, this KVM switch enables a laptop to replace the traditional keyboard, mouse and monitor on a second computer and today we will take a look and see what it looks like and how it performs." 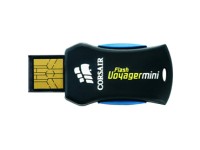 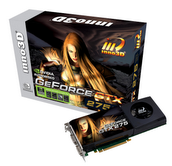 "Vienna, April 21st 2009 - Noctua today introduced the new NF-S12B 120mm premium fan. Succeeding the vastly successful NF-S12, the NF-S12B is a next generation quiet fan featuring Noctua's advanced SCD2 technology as well as a highly optimised blade geometry with Bevelled Blade Tips that improves its award-winning predecessor's airflow efficiency by up to 10%. "Our popular NF-S12 series is renowned for its excellent airflow/noise ratio, so further improving it was by no means an easy feat", explains Mag. Roland Mossig, Noctua CEO. "It took us quite a lot of time and effort, but we couldn't be happier with the result. The new NF-S12B doesn't only provide more airflow at the same noise level than the original NF-S12, it also produces higher static pressure." Building on the proven basis of the original NF-S12 impeller, the design goal for the NF-S12B was to further improve its predecessor's much acclaimed airflow/noise ratio and to increase static pressure in order to allow for a broader range of applications. These goals have been achieved by reducing the tip clearance at the leading edge and adding Bevelled Blade-Tips, a feature first introduced with the NF-B9 92mm fan." CLICK HERE to read more from Noctua!