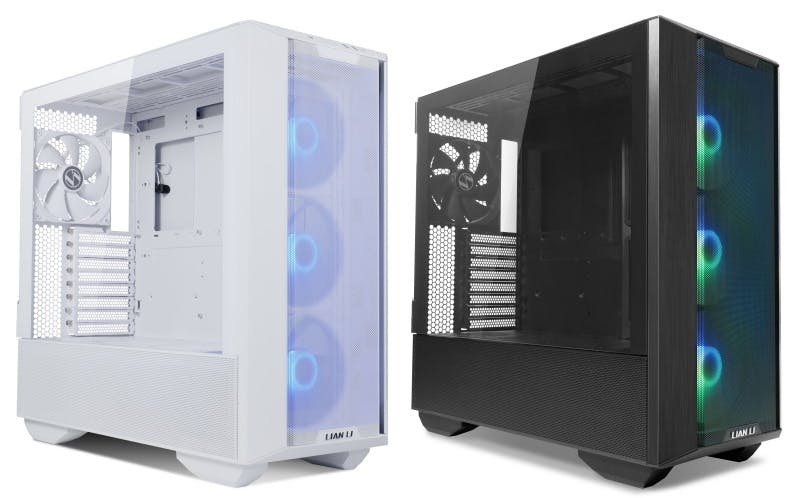 July 15th, 2022, Taipei, Taiwan – LIAN LI Industrial Co. Ltd., a leading manufacturer of chassis and PC accessories, announces the latest addition to the LANCOOL series with the LANCOOL III. Designed to provide the best-in-series stock performance, the LANCOOL III comes equipped with a redesigned front panel with 51% porosity, four pre-installed 140mm PWM fans, and simultaneously support up to three 360mm radiators at the top, front, and bottom. The LANCOOL III features an updated front panel design with continuous aluminum strips which act as side panel handles, and an improved cable management solution. The LANCOOL III is available in black or white, and RGB or non-RGB editions.

Best-In-Series Performance
To deliver great out-of-the-box performance, the LANCOOL III is air-flow optimized with a 51% porosity front mesh panel, fine mesh panels at the top and both sides of the PSU shroud, and four pre-installed 140mm PWM fans. The LANCOOL III provides a wide range of cooling compatibility options, allowing users to install up to a 360mm radiator at the front on the multi-position bracket, above the PSU shroud (80mm thick max), and up to a 420mm radiator at the top (75mm thick max) in an offset position with enough clearance for 60mm tall memory sticks. With support for up to E-ATX motherboards, 420mm long graphics cards, and ATX PSUs, the LANCOOL III also offers multiple storage solutions for mounting up to 12 x 2.5” SSDs or 4 x 3.5” HDDs and 8 x 2.5” SSDs.

Functional New Look
The LANCOOL III sports a futuristic look with its two brushed aluminum strips located at the front. Each strip doubles as a door handle for the right and left side tempered glass panels. With a modern I/O located at the top of the front panel (Power button, Reset button, two USB 3.0, USB Type C, Audio), users have the option to relocate it to the bottom for easier access when the case is placed on a desk.

For the LANCOOL III RGB, the I/O panel is equipped with additional RGB control buttons to provide lighting customization to the 3 x 140mm ARGB pre-installed fans at the front.

Advanced Cable Management
The second chamber of the LANCOOL III provides comprehensive cable management to ensure the case is looking its best. Behind two removable cover panels mounted on hinges and magnetically closed, 8 x Velcro straps are built into the case. Three large Velcros with multiple channels to organize and separate the front panel cables, motherboard 24-pin and GPU power cables, and fan hubs. Around the motherboard area, 5 x smaller Velcro straps are installed for routing cables such as the CPU EPS cable and storage drives. In addition, there is enough room for the mounting of up to four fan/ARGB hubs.

Vertical GPU Additional Accessory
Vertical GPU mounting is also possible in the LANCOOL III by using the O11D EVO vertical GPU kit. Users have the option of a black or white kit that’s equipped with a PCIe 3.0 or 4.0 riser cable. The vertical GPU kit can be installed in the LANCOOL III at different heights with a lower position leaving 6mm of clearance between the kit and the top of the PSU shroud, and a higher position leaving 46mm of clearance for fans and a radiator above the PSU shroud.

The LANCOOL III is available for pre-order starting July 15th, 2022.

For more information about the LANCOOL III, visit https://lian-li.com/product/lancool-III/

The LANCOOL III is available at NEWEGG:

The LANCOOL III is available at Caseking:
www.caseking.de/lian-li-lancool-iii

The LANCOOL III is available at Overclockers UK:
https://www.overclockers.co.uk/lp/lian-li-lancool-iii