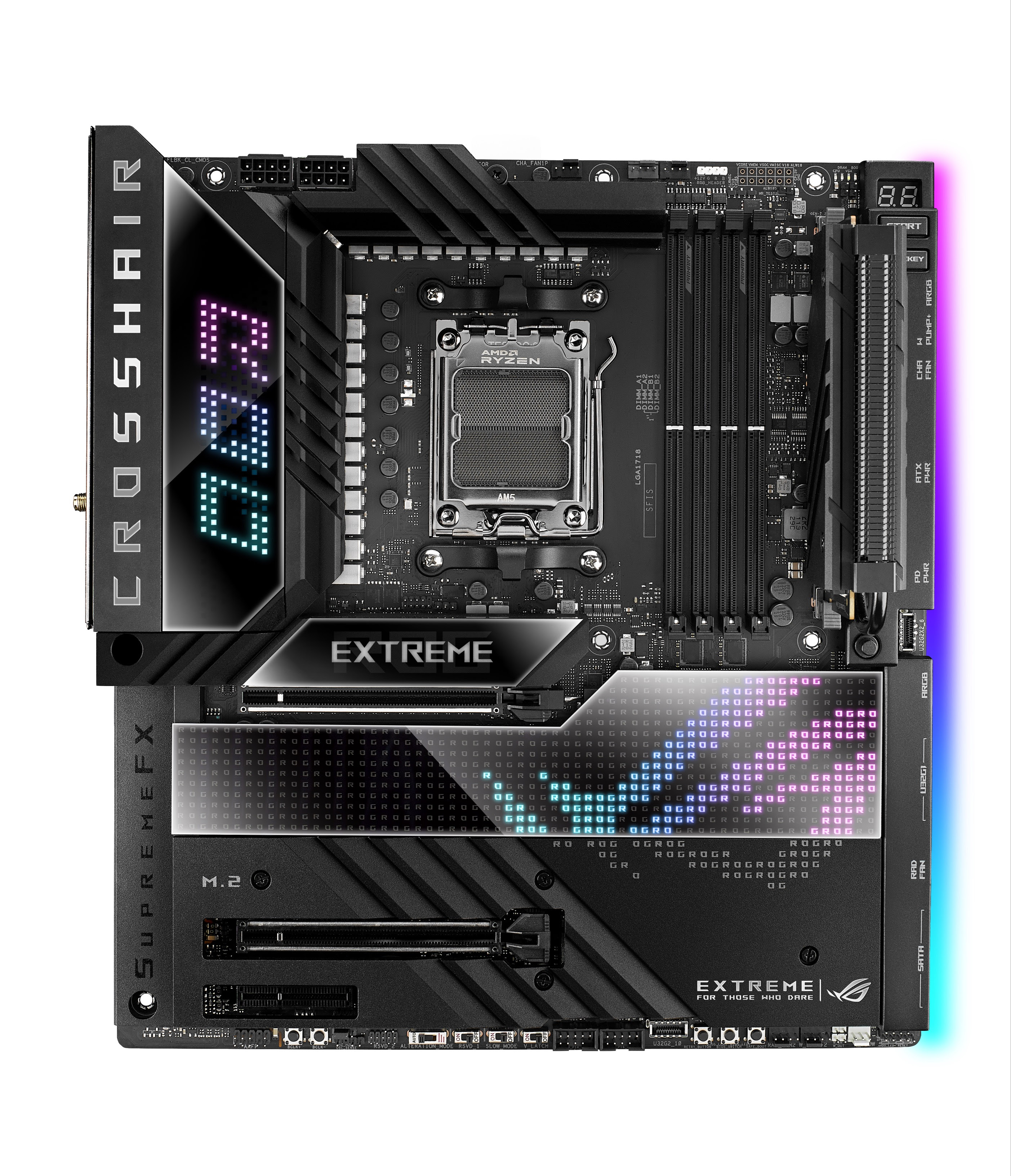 With double the link speeds of PCIe 4.0, PCIe 5.0 connectivity provides users with the bandwidth to utilize USB4® and USB 3.2 Gen 2 ports on the ROG Crosshair X670E Extreme. Additionally, the ROG Crosshair X670E Extreme features a front panel USB 3.2 Gen 2 2x2 connector with support for Quick Charge 4+. By pairing this motherboard with a case featuring a front-panel USB Type-C® port, users can have convenient access to 60-watt charging.*

Two PCIe 5.0 x16 slots stand ready for the cutting-edge graphics cards of today and tomorrow. Between its two onboard slots and the three additional slots made available through the ROG PCIe 5.0 M.2 card and the ROG GEN-Z.2 card, the ROG Crosshair X670E Extreme offers a total of five M.2 slots―four of which support PCIe 5.0 x4 mode. Heatsinks for all the slots, including those on the add-in cards, ensure that users get the full performance of their drives without throttling. Six SATA 6 Gbps ports let users establish an even larger storage array, so they never have to ration their game library.

Gaming Aesthetic: Enhanced
With its angular lines and vivid RGB LED accents, the ROG Crosshair X670E Extreme motherboard includes endless personalization options for users. The X670E Extreme features the AniMe Matrix™ display, an array of LEDs that can show off custom retro-style animations, and vibrant underglow lighting streams from the right edge of the board. An AURA RGB header and two addressable Gen 2 headers allows users to connect RGB LED strips for their case—and easily synchronize it all with their compatible Aura Sync gear.

Six fan headers let users establish and control airflow in their build. Users looking to include liquid-cooled solutions in their build can connect up to two high-power pumps and keep tabs on every aspect of their loop with a comprehensive collection of liquid-flow-monitoring headers and sensors.

The PCIe Slot Q-Release button allows users to release their graphics card from the slot with one press. Additionally, the board includes a new single-sided Q-DIMM latching design. The design features a single latch on the easier-to-access side of the DIMM slot, allowing the board to hold a memory stick firmly in place. Installing RAM with the ROG Crosshair X670E Extreme motherboard—and upgrading it down the road—is much easier as a result of these design features. Lastly, An M.2 Q-Latch on the board allows users to secure or loosen an M.2 drive with just their fingertips.

The ASUS Q-LED diagnostic array provides a quick and easy reference if a system encounters a critical error during its power-on self-test. Four LEDs on the motherboard, clearly marked for the CPU, RAM, graphics card, or boot device, will light up and notify users exactly which component has encountered an error.

AM5 Motherboard Options On the Horizon
The ROG Crosshair X670E Extreme is the first to debut in the ROG AM5 series with the ROG Strix, TUF Gaming, ProArt, and ASUS Prime families following a future release. Stay tuned for more information.

We have 1400 guests and one member online