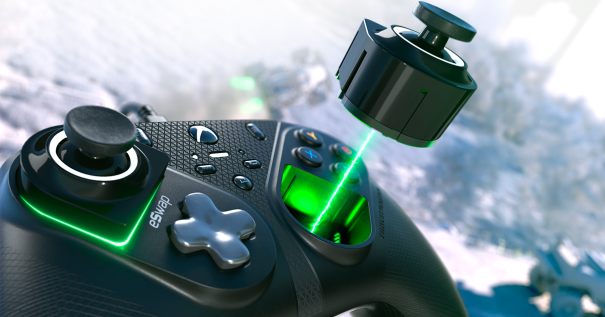 Rennes, April 14, 2022 — Thrustmaster is thrilled to welcome a new member of its ESWAP family, with the launch of the brand-new ESWAP S PRO CONTROLLER. Smaller than its predecessor ESWAP X PRO CONTROLLER, the “S” version is a perfect fit for all hand sizes and gaming styles. Gone are the days of having to buy a whole new gamepad just because its mini-sticks are on their way out! Thanks to Hot-Swap technology, changing mini-sticks is a snap. Get ready to climb the rankings of your favorite games — with a wired gamepad that’s surgically precise and almost unbelievably responsive, plus officially licensed for Xbox Series X|S, Xbox One and Windows. Designed for gamers looking to step up to the big leagues, ESWAP S PRO CONTROLLER will give you the edge you need to triumph over your adversaries and join the ranks of the gaming elite.

RELOAD: Say goodbye to losing control because of an aging mini-stick that drifts! With T-MOD technology and the unique Hot-Swap feature, you can replace your mini-sticks instantly.

RESTART: There’s no need for a screwdriver or any other tools — it just takes a couple of seconds to swap out an old mini-stick for a new one. Get right back to your game before the next level finishes loading!

SUSTAIN: You’ll never need to buy a new gamepad just because its mini-sticks are worn out. Keep the same controller and just replace the mini-sticks when necessary, allowing you to maintain even extremely intense gameplay indefinitely.

Specially designed to help perfect your aim, ESWAP S PRO CONTROLLER features optimized next-generation (NXG) analog mini-sticks, for enhanced precision and an extended lifespan of 2 million activations. Whatever happens, you’ll never be able to blame your gamepad — because it will never let you down!

Dominate in fights and master all your diagonal movements, thanks to a D-pad with 4 tact switches for fantastic responsiveness. Developed in conjunction with a renowned fighting games expert, you’ll be able to link up all of your combos incredibly easily — thanks to an ideal activation distance of just 0.02 inches / 0.45 mm.

You’ll definitely want to take advantage of the super-responsive clicks made possible by the controller’s tact switch buttons — which are 64% faster than standard membrane-based buttons (as evaluated in lab testing conditions), and rated for more than 5 million activations. Each button features a high-quality tact switch for next-level performance, with a satisfying “click” feel. Response times are close to zero, with the buttons’ activation distance reduced to 0.01 inches / 0.3 mm. Enjoy a better feeling of control, throughout long gaming sessions and over the long term.

The ThrustmapperX software lets you configure all of the settings you’ll ever want to adjust:

On Xbox, ThrustmapperX appears directly in the console’s menu for quick and easy use.

Customize virtually every aspect of the gamepad — so that it’s a perfect fit for you, and nobody else!

We have 1222 guests and one member online