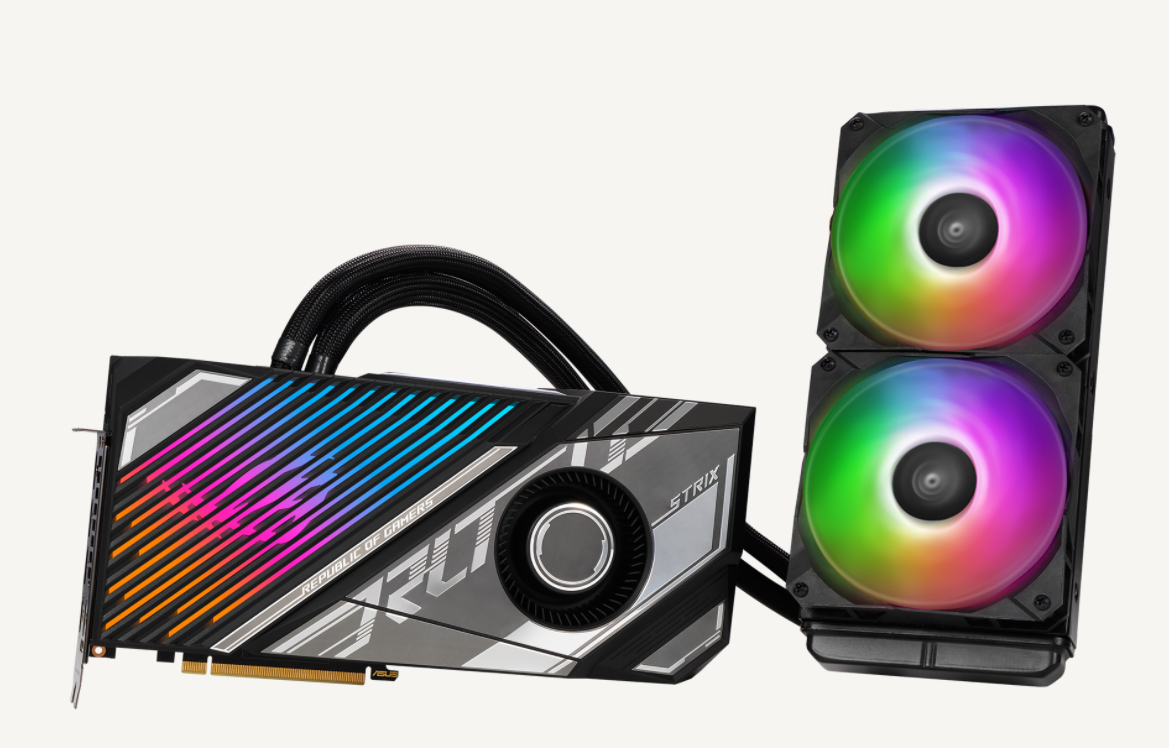 The ROG Strix LC GeForce RTX 3090 Ti includes a closed-loop liquid cooling system that keeps temperatures and noise levels under control. Featuring a custom-designed cold plate that extends over the GPU die and the onboard GDDR6X memory and 560 mm tubing, consumers will have flexibility installing the radiator in larger cases or builds that also feature an AIO CPU cooler. The 240 mm radiator on the GPU is cooled by a pair of 120 mm ARGB fans designed to improve airflow at high static pressure. A blower-style fan and a low-profile heatsink under the shroud expel the heat produced by the power delivery components, all in a slim 2.6-slot design.

Power-sensing circuitry alerts users through a static LED light if they've neglected to connect the card to their PSU through its 1x16 pin power connector. Two FanConnect II headers allow users to connect case fans to the graphics card to increase airflow when the GPU is under load. A dual-mode BIOS switch offers a choice between the highest cooling performance and clocks, or quieter operation. 0dB tech allows the graphics card to automatically drop into silent running mode at idle and light loads.

The TUF card’s Axial-tech fan design has been optimized for a new, larger heatsink that features more fins and surface area from the last generation to allow higher RPMs and maximum airflow through the heatsink without a corresponding increase in acoustic footprint. A dedicated memory heatsink keeps the card’s GDDR6X memory cool for reliably swift performance, and a 0dB fan-stop mode allows the card to maintain minimal noise levels under light loads or at idle.

Top-shelf capacitors, chokes, and MOSFETs are selected to effortlessly deliver hundreds of watts at a millisecond’s notice. The Super Alloy Power II parts are soldered to the PCB using our advanced Auto-Extreme automated manufacturing process. Smooth joints on the rear of the PCB and the elimination of human errors ensures each graphics card meets ASUS standards and rigorous specifications.

We have 1147 guests and one member online