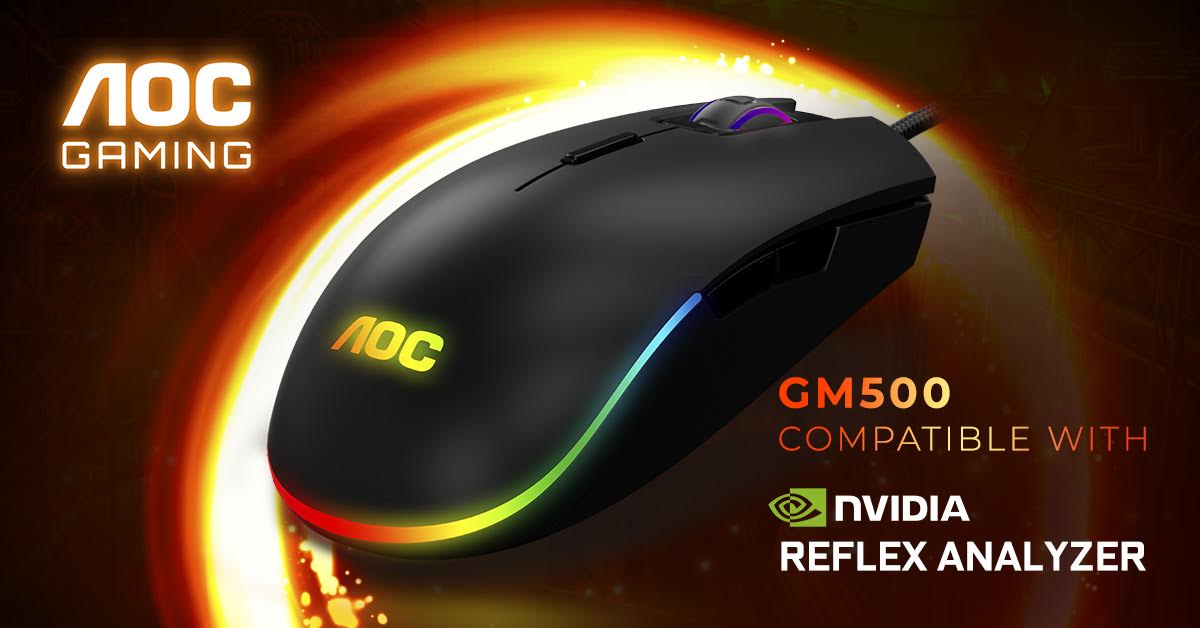 AGON by AOC is proud to announce their first mouse to support the innovative NVIDIA Reflex Analyzer feature. Gamers can experience faster system latency with the AOC Gaming GM500 and react even faster to the action on the screen.

AGON by AOC expands its peripheral arsenal and brings the GM500 to the next level by announcing its compatibility with NVIDIA Reflex Analyzer. This feature is an innovative tool which measures and optimizes system latency to allow for faster reactions and plays, giving a game-winning advantage over opponents.

What is NVIDIA Reflex?

NVIDIA Reflex is a unique technology revealed in 2020 by the American technology company and renowned GPU manufacturer NVIDIA. The tool connects all three elements of a battle-station, the monitor, the peripherals (mice and keyboards) and the PC with its GPU to measure the system latency of the computer. ‘System latency’ refers to the time it takes between a mouse click and the input converted on screen.

One part of the system latency is the rendering latency. This value is determined by the rendering process of the PC. The CPU of a PC queues up a range of images to be rendered so the GPU is always supplied with fresh frames to show. This maximizes frame rate but increases the latency.

Here is where NVIDIA Reflex comes into play: It reduces the size of the rendering queue and keeps the CPU and GPU perfectly in sync. The software development kit enables game developers to provide in-game settings with which the players can see metrics to track and improve their rendering latency. This is especially beneficial for top esports titles such as VALORANT, Fortnite or Apex Legends, where players need to bring their quickest reactions to the table. With NVIDIA Reflex, users receive new in-game information about the environment and opponents faster, which allows for higher precision aiming and faster decision-making.

Immediate impact of your mouse clicks

Not only is it important to address the rendering latency, but the entire system latency should be tackled as well. This requires the monitor and peripherals of the battle-station to be in perfect synchronization with the PC to boost the performance even further. NVIDIA Reflex requires compatible equipment to measure the latency. The GM500 gaming mice can be plugged directly to the monitor via USB and register mouse clicks without any latency.

The GM500 is the first mouse in AGON by AOC’s range to include the revolutionary NVIDIA Reflex Analyzer. Also, the recently announced, the new AGON PRO AG254FG also received the NVIDIA Reflex certification, providing the necessary speed for smoother victories with less display latency.

Apart from the latency-improving feature, the GM500 also stuns with its extremely fast response time of 1ms, extensive 5,000 DPI and precise 100 IPS tracking speed. A dedicated DPI button lets players change the sensitivity on the fly so as to always have the ideal handling in any game and scenario. The mouse is especially designed for those who aim to play at the highest level of competitive gaming and enables precise and rapid input. Additionally, gamers can customize the GM500 to cater their own needs by programming keys and setting the right RGB lighting.