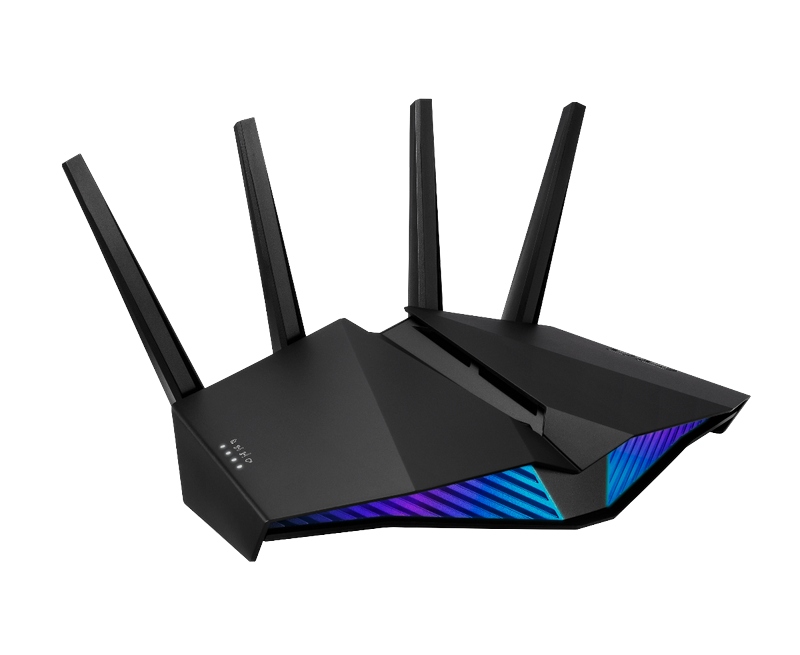 RT-AX86U is an upgraded version of the best-selling RT-AC86U, keeping the classic black chassis with gaming-inspired red accents. It features powerful WiFi 6 technology with combined overall speeds of up to 5700 Mbps[i] and is an NVIDIA® GeForce NOW™recommended router. The boldly styled RT-AX82U delivers WiFi 6 speeds up to 5400 Mbps and features a futuristic design with Aura RGB dynamic lighting effects.

Both models are packed with powerful, easy-to-use game acceleration features that will appeal to every type of gamer, especially mobile gamers. The ASUS Router app includes a one-click Mobile Game Mode, and wired devices can be easily prioritized via the online control panel or by connecting them to the dedicated Gaming Port. RT-AX86U also includes a 2.5 Gbps WAN/LAN port, giving it true 2 Gbps networking capabilities for WAN, LAN and WiFi.

ASUS AiProtection Pro with Parental Controls provides full protection for all connected devices including gaming smartphones. The routers also support the unique ASUS AiMesh technology, which allows them be used as part of a multi-router mesh network in conjunction with other AiMesh-compatible ASUS routers to create a seamless whole-home network.

Designed for Gaming
RT-AX86U and RT-AX82U include a wealth of features designed to allow any kind of gamer to easily accelerate their game play.

ASUS and NVIDIA are delivering low-latency game streaming to supported devices connected to the RT-AX86U. For wired gaming devices, one of the LAN ports on RT-AX86U is also a dedicated Gaming Port that prioritizes any wired device connected to it. RT-AX86U is a GeForce NOW recommended router for the very best cloud gaming experience, and Open NAT takes the complexity out of port forwarding with an easy three-step configuration process. Adaptive QoS can be configured to prioritize traffic from different kinds of apps, including games, so network bottlenecks should be a thing of the past. The RT-AX82U is in the process of being accepted into the GeForce NOW recommended program. GeForce NOW is an open cloud gaming service that lets people play their PC game libraries, streamed from world-class NVIDIA GPUs in the cloud.

Users can also prioritize any device on the network using the Gear Accelerator function in the router's online control panel. For wired gaming devices, one of the LAN ports is also a dedicated Gaming Port that prioritizes any wired device connected to it.

Open NAT takes the complexity out of port forwarding with an easy three-step configuration process, and Adaptive QoS can be configured to prioritize traffic from different kinds of apps, including games, so network bottlenecks should be a thing of the past.

RT-AX86U additionally supports lightning-fast 2 Gbps wired connections via 2.5 Gbps port that can be used as either a WAN or LAN. This means that RT-AX86U supports true 2.5 Gbps networking via WAN, LAN and WiFi.

The WiFi 6 in both the RT-AX86U and RT-AX82U uses 160 MHz channels to enable combined overall WiFi speeds of up to 5700 Mbps in RT-AX86U and 5400 Mbps in RT-AX82U. In a revolutionary move, WiFi 6 also combines OFDMA technology with MU-MIMO to deliver increased network capacity and efficiency in multi-device environments, as well as improved WiFi signal range for better coverage. The result is fewer WiFi dead spots and faster, more reliable WiFi connections for all devices, throughout the home, no matter how many devices are connected: gamers can be sure their game won't be interrupted by downloads or streaming on other devices. WiFi 6 also includes a feature called Target Wake Time that helps reduce power consumption for mobile and IoT devices, giving gamers more battery life for gaming.

Bold Gaming Style
The new ASUS gaming routers are designed for maximum visual appeal, with bold lines and gaming-inspired detailing. RT-AX86U has a vertical orientation — chosen for optimum performance — with discreetly powerful looks enhanced by the red panel at the front base of the router.

Designed with a full-on gaming vibe, RT-AX82U has a striking futuristic look. Its sleek, geometric lines give it a strong and purposeful stance, reinforced by the four non-removable antennas at the rear. At the front of RT-AX82U, a large full-width louvered window houses the stunning Aura RGB lighting system. Gamers can choose from a range of alternative full-color dynamic patterns — such as the colorful Rainbow effect — or choose their own colors from a selection of patterns. It can also be set to a static pattern if a calmer mood is desired.

Secure and Versatile
For maximum security, RT-AX86U and RT-AX82U support the latest WPA3 wireless security protocol, and include a free lifetime subscription to ASUS AiProtection Pro, which offers commercial-grade security and advanced parental controls. AiProtection Pro protects all devices connected to the network, including those that cannot run traditional antivirus software, such as smartphones and IoT devices.

Built-in ASUS AiMesh support means that RT-AX86U and RT-AX82U can be used as either a controller or a node in a mesh network built using AiMesh-capable routers. An AiMesh mesh network delivers whole-home WiFi coverage for all wireless devices, with seamless roaming and no dead zones.