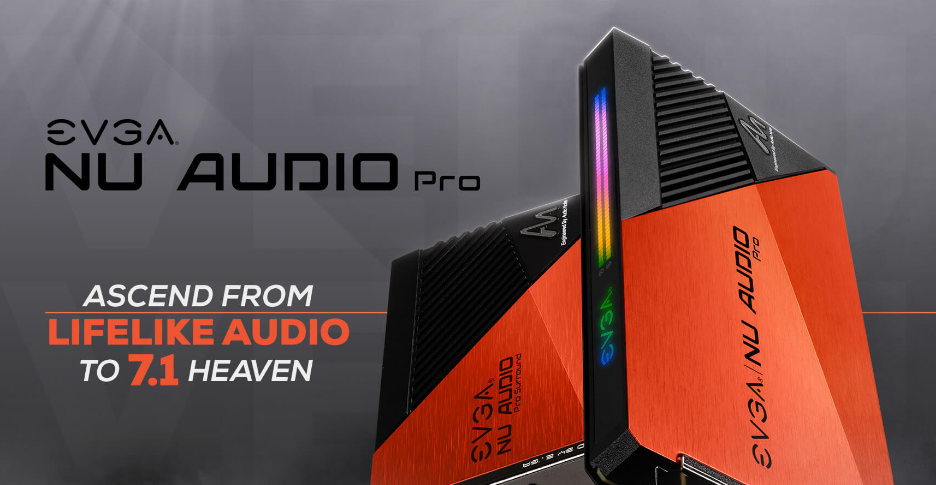 The EVGA NU Audio Card reintroduced the PC world to high-end audio, both stunning the audio world and making new fans along the way. The singular idea of producing Lifelike Audio and Gaming at an affordable price led to an exclusive partnership between one of the world’s most recognizable PC hardware manufacturers and one of the true icons of the audio world – Audio Note (UK).

Level Up Your Audio

The NU Audio Pro Cards change the game once again. The pursuit of audio perfection on a PC takes another step forward with the introduction of a 7.1 Surround solution by EVGA and Audio Note. We took the solid foundation of the NU Audio Card, improved the component selections throughout, and matched it to a secondary card to provide surround support. The result is an experience where critical listening sessions can yield to enjoyment, and where thinking will surrender to feeling.

The art of audio is about combining a lot of little details and fusing them together to create something greater than the sum of its parts. Careful testing and fine-tuning gives the NU Audio Pro a more refined look and audio signature than its predecessor. Here’s a look at what’s new on the NU Audio Pro:

The NU Audio Pro features a bold new cover design to remind you that this isn't your run-of the mill audio card.

The Seiryu capacitors, exclusive to the EVGA NU Audio Pro cards, are the progeny of Audio Note's KAISEI Electrolytic Capacitor lineage. Made using a slightly modified production process, these capacitors were designed from the ground up to improve the audio at every frequency.

The NU Audio Pro card also features AVX F95 audio tantalum capacitors to lower distortion, create a darker background, yet still give a dense lush feeling to the audio. The NP0 ceramic capacitors were replaced with Panasonic PPS types, to give a sweeter more natural treble. Combined, this gives an increased sense of air to wide-bandwidth recordings.

Headphone lovers have not been forgotten. The NU Audio Pro Card features an LT1469 op-amp for the headphone out, which provides a lusher and more high quality sound to the audio, bringing out great dynamics and sound-staging without the edginess or rough sounding qualities of other op-amps.

The NU Audio Pro features a new take on RGB by offering three different RGB lighting zones on the side of the card. Each zone can be linked to the other two, while the two bars can be configured for audio reactive lighting to change dynamically with your audio playback.

With more channels comes great responsibility. That’s why the NU Audio Software received a makeover to allow for new configuration options, individual and linked channel volume controls, and a new page to control the RGB lighting on the NU Audio Pro.

We've got you covered

EVGA is the #1 NVIDIA authorized partner in channel sales throughout North America. Based on the philosophy of intelligent innovation, market knowledge, and the real time operation, EVGA continues to identify the need in the market place and providing the solution to that need. By offering product differentiation, a 90 day Step-Up program, and other customer focused programs, EVGA is a clear leader in all categories: etail, retail, distribution, and system builders. With headquarters in Brea, CA, EVGA's global coverage includes EVGA GmbH in Munich, EVGA LATAM in Miami, and EVGA Hong Kong. For further information online about EVGA, visit https://www.evga.com.