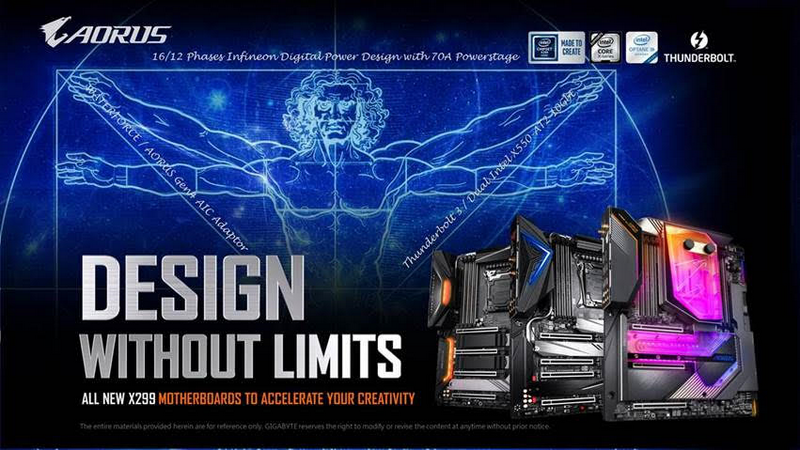 “Efficiency and reliability are at the top of the list for the needs of content creators but the versatility of a content creation focused workstation that can also be used a suitable gaming rig is also high in demand,” said Jackson Hsu, Director of the GIGABYTE Channel Solutions Product Development Division. “To fulfill the needs of users and content creators alike, we are introducing three all-new X299X series motherboards with fully validated support for Quadro® Graphics Cards. We want to make sure our users get the fastest network connectivity and lightning-quick data transfer speed with Intel Dual 10Gbe connectivity and the Intel® Thunderbolt™ 3 interface. These content creation focused motherboards bring more to the table than just pure content creation capabilities. With up to 16-phases, the power designs on X299X motherboards are geared towards unlocking the most efficient performance on Intel® Core™ X series processors. Support for 256GB memory allows users to easily handle even the most memory-intensive tasks. The multi-graphical configuration also enables users to fulfill both their content creation as well as hardcore gaming needs, giving them the best of both worlds!”

As quintessential content creation motherboards, GIGABYTE X299X Series motherboards not only unleash the potential of the newest Intel® Core™ X processors and support up to 256GB memory, they also pair with NVIDIA Quadro graphics cards flawlessly. Since GIGABYTE is the only Motherboard vendor that is an Authorized Distributor of NVIDIA Quadro in the market, GIGABYTE X299X motherboards have been tested with Quadro graphics cards extensively before release to ensure that they have the best compatibility with these high-end workstation graphics cards. With this level of support, the new content creation boards optimize performance on 3D modeling and video editing software so content creators have powerful tools for producing exciting new content.

The motherboard series retains the design principles of the GIGABYTE DESIGNARE series with its professional look but adds the AORUS touch with its design choices and customizability so even content creators can channel their inner gamer with the boards’ awesome style!

With higher data transfer speeds, content creators can minimize read/write times and maximize working efficiency. To address this need, X299X AORUS XTREME WATERFORCE, X299X DESIGNARE 10G puts the data transfer process on the fast-track with its built-in Intel® Thunderbolt™ 3 via two USB Type-C™ interfaces for 40 Gb/s bandwidth, which not only saves time but also facilitates transfers of larger files. With Daisy-Chain technology, users can connect up to 6 devices. The lane configuration between the board and the graphics card allows the Type-C™ interface to be used as a video and audio output. In addition to the increased bandwidth it provides, the Intel® Thunderbolt™ 3 controller chip on the two X299X motherboards comes with built-in USB 3.2 technology for faster transmission speeds as well as backward compatibility with USB 3.0 and USB 2.0, setting the standard for professional content creation motherboards. Support for DisplayPort 1.2 makes the Thunderbolt™ 3 interface even more indispensable for professional designers.

Built-in NVMe PCIe x4 M.2 slots on GIGABYTE X299X motherboards provide single slot transmission speeds up to 32Gb/s. For the M.2 slots, users can choose to allocate the lanes from the chipset or CPU to install Intel® OPTANE™ MEMORY or set up VROC disk array for incredible storage performance. To combat thermal throttling and prevent excess heat from slowing down read/write speeds on M.2 SSD devices while they are operating at high speeds, GIGABYTE has done its research and implements M.2 Thermal Guard to ensure that heat doesn’t slow M.2 SSD performance.

The power supply design, quality of components, and the number of power phases play a huge role in the performance and stability of the motherboard. To fully unlock the monstrous power of the Intel® Core™ X series processors, GIGABYTE X299X utilizes a 16-phase power design with a capacity of 70A per phase and an excellent VRM design for the processor to function smoothly even under high loading. Aside from the refined VRM design, Ultra-Durable components such as server-grade inductors and 10K durable black solid caps reduce interference, increase the durability of important components, and prevent interference from affecting the PWM signals, allowing for optimized performance on the new generation of Intel® Core™ X series processors and greater working efficiency for content creators. Aside from the excellent power design, GIGABYTE X299X motherboards feature a Quad-Channel DDR memory configuration that comes with 8 DIMM slots and 256GB memory support, making it a highly stable, high-performing platform that is perfect for video editors, designers, streamers and the like.

Effective heat dissipation is absolutely essential for content creation systems to perform at their best so a quick glimpse at the motherboard’s extensive armor gives users an idea of how extensive the cooling solution on these boards are. The armor also adds to the board’s aesthetics with its professional look and lighting configuration. Fins-Array heatsink, large diameter heatpipe, high thermal conductivity pad, and the thermal backplate maximize the heat dissipation on the board. X299X AORUS XTREME WATERFORCE takes cooling a step further with an AIO cooling design that delivers cooling to the CPU, VRM, chipset, M.2 SSDs for extreme cooling performance.

X299X motherboards come with Smart Fan 5 Technology, the ideal cooling solution. The newest edition of Smart Fan technology not only allows content creators to customize fan speeds and preferred heat thresholds to their liking but also comes with hybrid fan headers and temperature sensors to support different fan accessories and provide up to date information on temperature and fan speeds. Smart Fan 5 prevents overheating and stagnant coolant flow, making watercooling more convenient to use. In addition, Ultra-Durable components increase both the durability and performance of the motherboards.

We have 708 guests and one member online