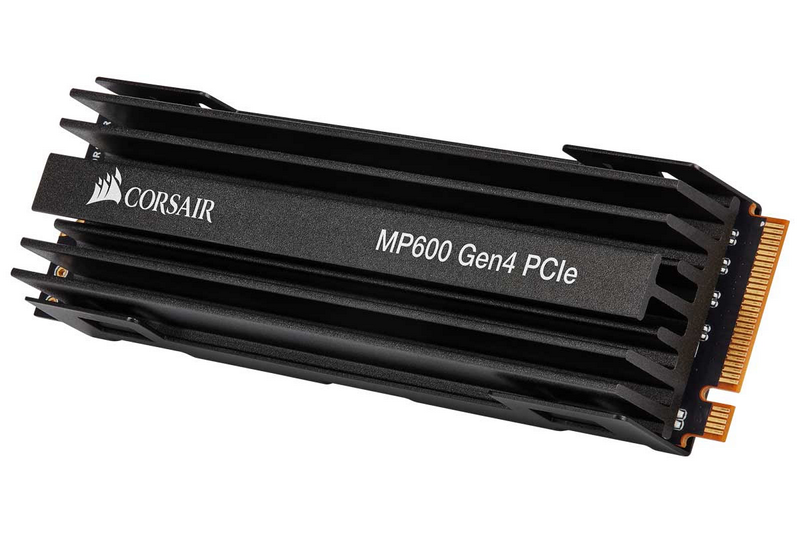 The MP600’s phenomenal performance stems from the hugely increased bandwidth of PCIe 4.0 (PCI-Express Generation 4), a feature that will be made available to customers for the first time as part of the AMD X570 chipset and 3rd Generation AMD Ryzen™ Desktop Processors. Easily fitting into a PCIe 4.0 x4 M.2 slot, the MP600’s NVMe interface and high-density 3D TLC NAND combine with a Phison PS5016-E16 controller to enable a new level of single-drive SSD performance. Boasting up to 4,950MB/s sequential read and 4,250MB/s sequential write speeds, the MP600 is ready to become the storage center of your new 3rd Gen AMD Ryzen Desktop Processor and AMD X570 chipset-based system.

Alongside today’s unveiling of the MP600 and the AMD X570 chipset, CORSAIR is proud to announce wide-ranging compatibility across its full lineup of products for both the new AMD X570 chipset and the upcoming range of 3rd Generation AMD Ryzen™ Desktop Processors. From high-efficiency power supplies, performance all-in-one liquid CPU coolers and enthusiast cases to high-speed SSDs and performance DDR4 memory, CORSAIR components ensure that users will get the most from AMD’s exciting new platform and range of processors.

“AMD is making huge strides in bringing new, high-performance features to the PC enthusiast market, and we’re delighted to be able to partner with them in doing so,” said Andy Paul, Founder and CEO of CORSAIR. “With the MP600, AMD X570 motherboard owners will be able to experience the benefits of PCIe 4.0 immediately, with the fastest CORSAIR SSD yet at the center of their system.”

The CORSAIR Force Series MP600 NVMe PCIe Gen4 x4 M.2 SSD will be available alongside the full launch of AMD X570 chipset motherboards and new 3rd Generation AMD Ryzen™ Desktop Processors in July 2019. The MP600 will be available from the CORSAIR worldwide network of authorized retailers and distributors.

The Force Series MP600 is backed by a five-year warranty and the CORSAIR worldwide customer service and technical support network.

For up-to-date pricing of the CORSAIR Force Series MP600, please refer to the CORSAIR website or contact your local CORSAIR sales or PR representative.

Founded in 1994, CORSAIR has grown from pioneering the high-performance DRAM market into one of the world’s leading providers of high-performance PC peripherals and components. CORSAIR offers a complete range of products to equip gamers, enthusiasts and e-sports athletes, including mechanical keyboards, precision gaming mice, wireless headsets, high-performance components that gamers use to build gaming PCs, and the CORSAIR ONE fully-integrated gaming PC. With a company-wide commitment to quality, innovative design, advanced features and high performance, CORSAIR products have won thousands of media and industry awards, earning their place in gamers’ hands and PCs following years of development and engineering by a team dedicated to building great products they themselves would want to use.

Copyright © 2019 CORSAIR Components, Inc. All rights reserved. CORSAIR, the sails logo, and Vengeance are registered trademarks of CORSAIR in the United States and/or other countries. All other company and/or product names may be trade names, trademarks, and/or registered trademarks of the respective owners with which they are associated. Features, pricing, availability, and specifications are subject to change without notice