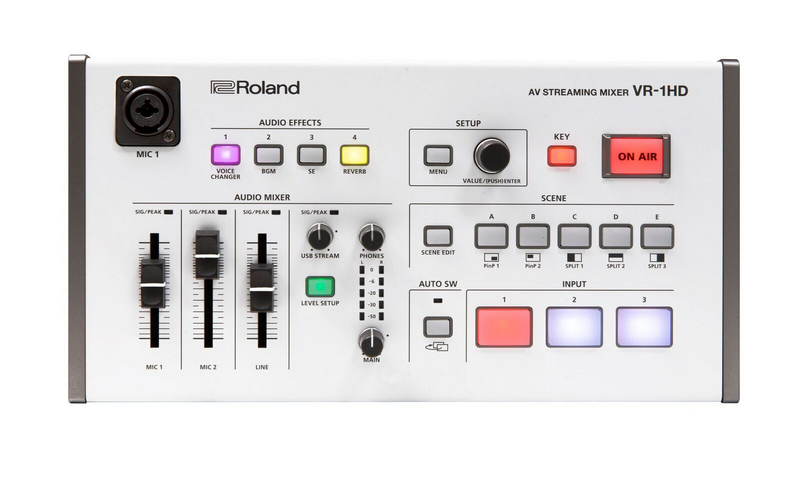 Compact and portable, the VR-1HD has three HDMI inputs that each accept HD and computer video resolutions up to 1080p, avoiding compatibility issues. HDMI embedded audio from all sources can be mixed with the two studio-quality XLR microphone inputs and analog line input. Further, the VR-1HD is designed with dedicated controls and features that accommodate operation by talent during live broadcasting, a benefit that easily puts talent in their own director’s chair.

When editing video to post online or for playback during video streaming, the VR1-HD offers options for layering video along with high impact transitions. With Scene Switching, end-users can instantly switch between ‘scenes’ containing preset arrangements of layered sources in customizable inset windows. The VR-1HD can be connected to a computer via USB 3.0 for livecasting or recording.

The VR-1HD’s three Auto Switching Modes simplify talent-as-operator use for applications like live musician performance and live streamed vlogging. In the Video Follows Audio mode, cameras are switched based on who’s speaking into their microphone. With Beat Sync Switching, the VR-1HD will switch camera inputs based on musical tempo. In Auto Scan mode, the VR-1HD can be set to switch between sources either in order or randomly at a preset rate.

The VR-1HD also features an Auto Mixing function to balance sound levels. Audio sources can also be set to automatically change when video sources are switched by engaging the Audio Follows Video mode. The VR-1HD’s audio processing capabilities include equalizers, compressors, gates and reverbs, as well as Roland’s Voice Transformer technology for real-time effects ranging from gender transformation to radical stylized vocal character. Recorded sounds can be triggered by a button push to play back from USB memory.

Users can take advantage of preset sound effects, jingles and theme songs and more content assignable to Audio Effects buttons, to play during a video or performance. Streaming performances and presentations are also made easy by using USB 3.0 ports on the user’s computer.

We have 1760 guests and one member online