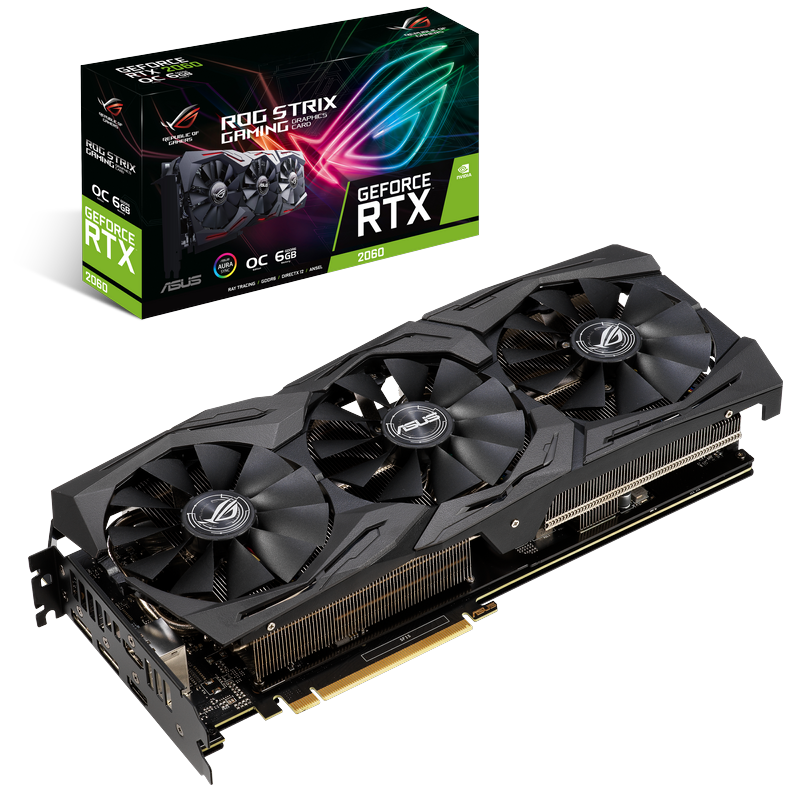 The ROG Strix GeForce RTX 2060 is designed for showpiece builds, with features that hint at the overclocking power it packs under the hood. Aura Sync RGB lighting offers almost limitless color customization and graces both the shroud and metal backplate. Three patented Wing-blade fans bring top-end performance to this mainstream Turing™ card. The thermal solution is paired with a myriad of other premium features such as a proprietary automated manufacturing process called Auto-Extreme technology, a metal brace that reduces tension on the PCB, and FanConnect II headers that allow hybrid fan control to account for both GPU and CPU temperatures. For those looking for brains and beauty, the ROG Strix GeForce RTX 2060 won’t disappoint.

The ASUS Dual GeForce RTX 2060 is for gamers who value pure performance. A 2.7-slot footprint accommodates a large heatsink, making the overall surface area of the cooling array more than 50% larger compared to previous-generation designs. Two Wing-blade fans trickle down from the ROG Strix card, offering IP5X dust resistance for durability along with a 0dB mode¹ to minimize noise during light loads. A robust metal backplate wraps things up and solidifies the ASUS Dual’s position as the most value-oriented NVIDIA GeForce RTX 2060 from ASUS.

The ASUS Turbo GeForce RTX 2060 is designed from the ground up for systems with multiple GPUs or other airflow-restricting scenarios. It incorporates a host of subtle design optimizations that improve airflow through the shroud and increase reliability. Upgrades include an 80mm IP5X dual-ball bearing fan and a new shroud design that allows more air to flow into the cooler, even when it’s pressed against a glass chassis panel or another graphics card. When a blower-style card is called for, the Turbo line is the reliable choice.

We have 1087 guests and no members online