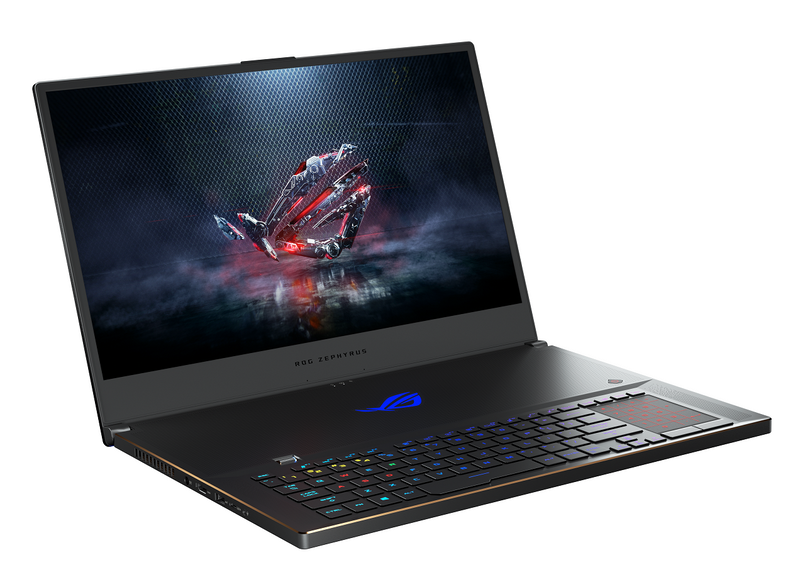 Las Vegas, CES (January 6, 2019) — Making its debut at CES 2019, the all-new ROG Zephyrus S GX701 takes hardcore gaming to the next level with the new NVIDIA® GeForce RTX™ 20-series GPUs with Max-Q design and 8th Generation Intel® Core™ i7 processor plus the GX701 doubles down on the display. It expands the 144Hz refresh rate screen to 17 inches, frames it with super-narrow bezels and adds NVIDIA G-SYNC™ and Optimus™ technology for the best gaming experience. The panel is Pantone® Validated for serious content creation work before playing the latest blockbuster games.

Even with these upgrades and a much larger screen, the ROG Zephyrus S GX701 maintains an impressively slender profile and surprisingly compact footprint. It’s more immersive, powerful, and versatile than any Zephyrus before without sacrificing the portability that defines the family.

Get GeForce RTX graphics under the hood

Pushing frame rates high enough to saturate the screen requires a powerful GPU, so the Zephyrus S GX701 can be configured with up to a GeForce RTX 2080 with Max-Q design. NVIDIA GeForce RTX 20-series graphics provide the ultimate PC gaming experience. Powered by the new NVIDIA Turing GPU architecture and the revolutionary RTX platform, these processors bring together real-time ray tracing, artificial intelligence, and programmable shading.

A small footprint with plenty of punch

A potent processor allows the Zephyrus S GX701 tackle any task with confidence. The 8th Gen Intel Core i7-8750H boasts six cores and 12 threads with a peak Turbo clock of 4.1GHz. It has ample resources for demanding applications like video editing and 3D rendering, and heavy multitasking like mixing gaming with streaming, recording, and separate voice chat.

Up to 24GB of fast DDR4-2666 system memory rides shotgun along with as much as 8GB of separate GDDR6 VRAM dedicated just to the GeForce RTX GPU. There’s loads of wicked-fast storage supplied by an NVMe SSD with up to 1TB of capacity and four lanes of PCI Express 3.0 bandwidth.

ROG created the first gaming laptop capable of being powered by DC or USB Type-C™ (USB-C™), and the Zephyrus S GX701 has the same technology. With support for USB Power Delivery, it can handle everyday work powered by a 65W Type-C adapter that’s much smaller than the required AC adapter for maximum gaming performance. This Type-C port is also capable of driving an external monitor via DisplayPort 1.4. Add the HDMI 2.0b output, and it becomes power a mobile workstation with dual 4K displays running at 60Hz.

Smart amplification expands the range of the dual 2.5W built-in speakers so they can produce louder sound with less distortion. Most users will opt for their favorite headset via the 3.5-mm audio jack or one of the USB ports. The Zephyrus S can simulate surround sound for stereo devices like headphones, USB DACs, and VR headsets. It also has audio features designed specifically for streaming and recording, including automatic volume stabilization and noise and echo cancellation.

All of this power would be wasted if the user could not travel easily with the unit. Slim 6.9-mm bezels allow the massive 17.3” screen to squeeze into a body just 15.7” wide, so it fits in most conventional laptop bags and backpacks. The Zephyrus S GX701 is the most compact 17” gaming notebook around, and at only 18.7mm, it’s also the thinnest.

Performance varies constantly depending on the game and what’s happening in the scene. Most displays refresh at a consistent rate, which creates problems when new frames aren’t ready at the right time, but the Zephyrus S GX701 uses NVIDIA G-SYNC™ technology to compensate. It synchronizes the refresh rate of the display with the frame rate of the GPU to eliminate visual tearing that distracts from immersion.

NVIDIA G-SYNC delivers the best gaming experience when you are plugged in. If you’re trying to be productive on the road, NVIDIA Optimus™ technology provides the best battery life by turning on the discrete GPU only when it’s needed for gaming and other heavy lifting.

Intent on having the best of both worlds, our engineers developed an exclusive GPU switch that lets you switch between G-SYNC and Optimus modes. With a few clicks and a reboot, the Zephyrus S GX701 transforms from a gaming powerhouse with buttery smooth graphics to a productivity workhorse with longer battery life.

Since the original Zephyrus, we’ve been working closely with our panel providers to push the limits of gaming laptop displays. Much of our collaboration has been in the pursuit of performance, which is why the Zephyrus S GX701 screen runs at refresh rates up to a super smooth 144Hz. The 3-ms gray-to-gray response times make the picture especially sharp at speed, whether lining up targets in a fast-paced shooter or quickly scrolling through web pages on the desktop.

This display is not only perfect for playing the latest blockbuster games, but for creative content work where accurate colors are critical. It’s carefully tuned at the factory to ensure each one meets stringent Pantone Color Validation requirements for accuracy and uniformity. ProArt™ TruColor Technology guarantees color accuracy that is better than most desktop monitors.

Ultra-slim chassis leave little room for airflow, which makes cooling the CPU and GPU incredibly difficult. To avoid compromising performance, ASUS designed an innovative Active Aerodynamic System (AAS) that exposes a large intake when lifting the lid that increases airflow compared to traditional designs. This design draws additional air through vents above the keyboard, and dual fans propel it all through four heatsinks and exhaust vents flanking the rear corners to ensure the Zephyrus S GX701 runs cool in all conditions.

Dust and other particles inevitably get sucked into laptop fans, but this self-cleaning cooling system helps to avoid accumulation inside. Each fan has a special anti-dust tunnel that catches particles and directs them out the back of the chassis, preventing buildup on the heatsink fins that could reduce performance and stability over time.

Fan speeds are controlled by an intelligent algorithm that responds automatically to temperature changes. Users can select between three expertly tuned profiles via a convenient keyboard shortcut to quickly adapt to different usage scenarios. With the highest fan speeds, Turbo mode is best for maximum performance. Balanced mode optimizes performance and cooling to lower noise levels for casual gaming, while Silent mode goes even further to adjust acoustics for lighter work and entertainment.

Shifting the keyboard forward improves cooling by not only leaving more room for the fans, but also moves users’ hands away from warmer regions around the CPU and GPU. Surface temperatures on the keyboard are much lower than with traditional designs, especially after hours of heavy gaming.

Light it up or not with keyboard personalization

Each key is illuminated by an independent RGB LED capable of producing a brilliant glow at peak brightness. Users can easily customize the intensity and configure colors and effects to suit different scenarios, like identifying important keys for specific games and choosing a subtler look for serious work.

Lighting extends to the touchpad on the right, which turns into a numpad at the touch of a button if you need to input a lot of numerical data, and to the integrated volume roller, which sits within easy reach of the users’ left hand. Familiar from desktop gaming keyboards like the ROG Strix Flare, the volume wheel makes quick adjustments easy to execute without interrupting your flow. The brightness of the backlighting even changes automatically based on the volume.

With Aura Sync, it’s easy to coordinate RGB colors and effects with compatible peripherals like the ROG Gladius II Origin mouse and Delta headset. Synchronized lighting can make a gaming setup look a lot more cohesive and professional, and it only takes a few clicks in our intuitive Armoury Crate software.

Think outside the chassis for a better webcam

The slim bezels surrounding the screen leave little room for an integrated webcam that doesn’t look upwards. ASUS looked at how gamers actually use their webcams and decided to make an external module that offers a better experience overall. The optional ROG GC21 external camera captures crisp Full HD footage at a silky 60 fps, doubling the speed of conventional webcams without sacrificing resolution.

Instead of being stuck in one place, the GC21 can be placed almost anywhere for the best view. Sit it on top of the display for a conventional angle or use the aluminum base to mount it on a table or shelf. A clever folding design collapses the camera to the size of a thumb drive, so it easily slips into a pocket or bag along with the included USB cable.

We have 1072 guests and no members online