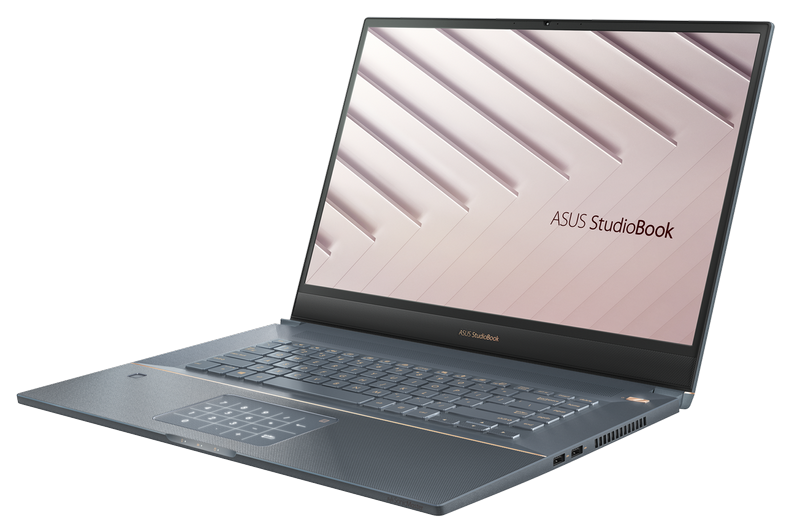 Las Vegas, CES (January 6, 2019) — ASUS today announced StudioBook S (W700), a new breed of workstation to support the demands of the modern content creator. Built based on feedback directly from industry professionals, StudioBook S is an incredibly thin 15-inch workstation with an even larger display, and weighs in at just 2.39kg. Its performance is unrivaled with an Intel® Xeon® processor and NVIDIA® Quadro® P3200 graphics, capable of handling a variety of complex workloads while balancing day-to-day tasks, and is complimented by PCIe® SSD drives in a RAID 0 setup, as well as Windows 10 Pro. StudioBook S will be available in the coming months with pricing and configurations to be revealed at launch.

Designers, architects, content creators, and programmers need high-performance hardware for work, but there’s an increasing demand for the ability to do that work in a variety of locations, whether they’re out in the field, syncing with a client, on location, or just traveling for business. A lot of people are unable to complete more complex jobs on the go, and wait until they get back to their home base because they need a professional-grade display or more power to get the job done in a reasonable amount of time.

StudioBook S is a new breed of workstation that allows users to work from anywhere, no matter the task. ASUS built StudioBook S based on feedback directly from professionals. Research showed that that professionals wanted better performance for working with 3D and VR content. They want something light enough to carry to meetings and powerful enough to make changes right there and then, as opposed taking notes and implementing feedback later on. There is also a need for a high-quality display with calibrated color accuracy for making on-the-fly changes that didn’t look completely different back at the office, plugged into an external display. StudioBook S takes all of the above and wraps it up in one sleek package.

Building a great workstation is about more than just putting together the right parts. It all has to be packaged properly, too. Users expressed a desire for a mobile workstation that was as big as possible but also as small as possible. To match the size of the display to the market, and to ensure everyone could carry the laptop easily, ASUS engineers turned to the bag industry for clarity on the most prevalent size of bag, which helped narrow down a maximum frame size for the laptop itself. Research shows that people mostly carry bags fit for a 15-inch laptop, so they set about maximizing screen size within that limit.

A larger NanoEdge display in a 15-inch chassis

Leveraging on the thin-bezel NanoEdge display design, StudioBook S fits a 17-inch, 16:10 ratio display in a 15-inch body. The bezels on either side measure just 5.3 mm, resulting in a truly expansive display that feels more like a desktop monitor. The panel itself covers 97% of the DCI-P3 color space — the preferred standard by video and film professionals. It is much wider than the sRGB color gamut used by typical PCs, so it’s capable of displaying a broader range of colors. It’s PANTONE® Validated to ensure the colors seen on the screen are accurate, too.

Each panel is factory-calibrated to delta E

Design, 3D rendering, simulations, or complex scientific calculations require peak performance. StudioBook S can be specified with an Intel Xeon or Intel Core™ i7 processor and NVIDIA Quadro P3200 graphics. The Quadro GPU is primed for professional applications and is power-efficient, which keeps fan noise to a minimum under heavy load. The Xeon E-2176M features six cores and 12 threads with a Max Turbo frequency of 4.4GHz. It is unmatched for tasks that use lots of cores, like rendering, though its high thread count also makes it ideal for power users who skip between several demanding applications throughout the day.

Support for up 64GB of RAM comes with the option of ECC memory for added stability. ECC works to detect and correct memory errors that could corrupt vital data or cause computers to crash in the middle of an important task. Solid-state storage is a must for anyone who can’t afford to wait around for their computer to catch up. StudioBook S doubles down performance with PCIe SSD drives in a CPU-attached RAID 0 setup.

The slim 18.4mm frame of StudioBook S is packed with the latest performance hardware, and keeping it cool to ensure optimal performance is no mean feat. A peek underneath reveals venting that spans the full width of the laptop’s base. Its sole purpose is to improve airflow, though it offers a bonus glimpse of the internals with some mood lighting courtesy of the keyboard backlight. But there’s a lot more to the cooling than just big vents and illuminated fans. Five heat pipes trace their way across the motherboard, carrying heat away from the CPU, GPU, and VRM toward vents in the sides and rear of the laptop, while the curved shrouds on each of the two fans help to channel more air into the fans themselves. This powerful thermal solution keeps throttling at bay even at full CPU loads, and runs silently at just 35dB.

StudioBook S is one of the thinnest compact Quadro GPU laptops measuring at 382 x 286 x 18.4 mm. Wrapped in a Turquoise Grey aluminum finish StudioBook S is precision engraved at a 45° angle to add a textured finish to the lid and palm rests. These diagonal lines are accented by rose gold diamond-cut edges that highlight the laptop’s slender body. Rather than rounding the corners, the edges are squared off for a professional look and feels extremely solid. Aesthetically, it's the furthest possible thing from the chunky black computers that come to mind when “mobile workstations” are mentioned, but the Turquoise Grey and Rose Gold accents add an element of subtle softness that meshes well with the more professional shape of the chassis.

Laptops are made for life on the move, and StudioBook S was created for more than just life in the office. At 2.39 kg, it’s light enough to be stored in a carry-on, and can be travelled with comfortably. It also offers military-grade durability, having been MIL-STD-810G tested for vibration as well as environmental extremes like temperature, humidity, and altitude, allowing it to be utilized to work on from virtually anywhere.

Designed to handle the high-performance workloads as well as the day-to-day monotony that is email and regular productivity work, the keyboard on StudioBook S features 1.4mm of travel for comfortable typing. The arrow keys are textured, making them easier to find by feel, and the backlight illuminates making it easier to work at night or in dark conference rooms. Shortcut keys help streamline common interactions that usually require multiple clicks and presses. There’s also a function key dedicated to turning the HD webcam on and off for easy access to video conferencing, without sacrificing privacy. Like the newest ZenBook lineup, StudioBook S features the discreet NumberPad in its trackpad. NumberPad can be turned on or off with a tap in the top right corner and makes light work of inputting numbers or calculations. Even with NumberPad activated, users can control the cursor with the trackpad.

Connectivity to suit any setup

StudioBook S is designed as a mobile work station, however, that doesn’t mean it can’t facilitate a more traditional multi-monitor professional setup when the need arises. There’s an HDMI 2.0 port and a USB Type-C™ with Thunderbolt™ 3 support for hooking up to external displays. This iteration of Thunderbolt 3 utilizes Intel’s latest ‘Titan Ridge’ JHL7340 controller, which is compatible with DisplayPort 1.4, and allows outputs to supported 8K displays. These are joined by three USB 3.1 Gen2 Type A ports, so there’s plenty of connectivity for thumb drives, external storage, and peripherals without the need for USB hubs.

With faster-than-wired speeds of up to 2.4Gbps — 3 times as fast as 802.11ac — the dual-band Wi-Fi 6 (802.11ax) in StudioBook S gives you speedy large-file transfers, with greater range and more stable network connections. The elegant workstation also features a high-speed SD card reader (SD 4.0 / UHS-II) for pulling media off of memory cards without the use of an adapter.