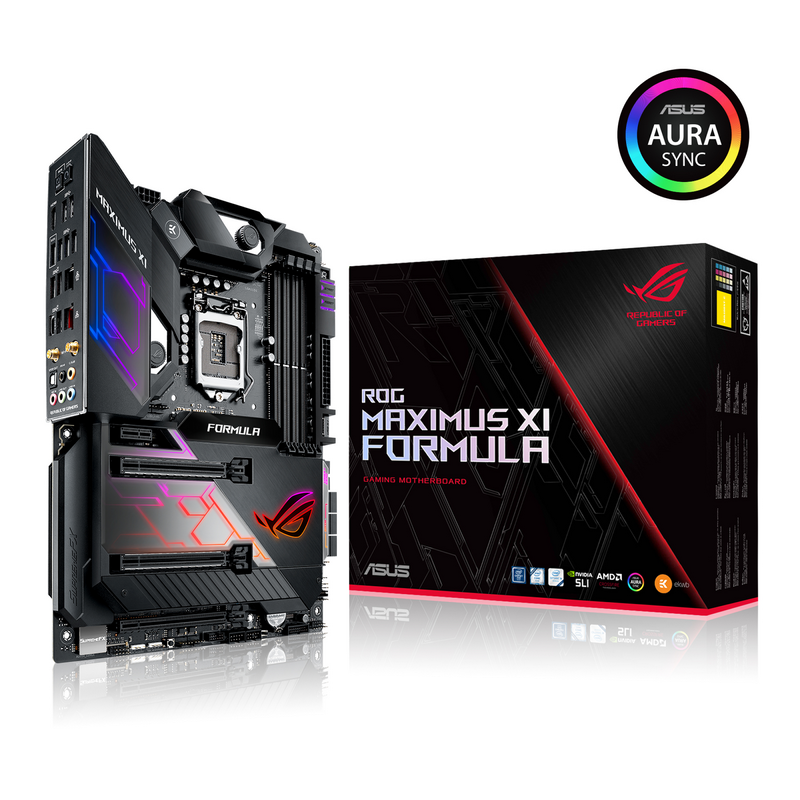 ASUS is excited to support this new generation of Intel processors with a wide variety of new motherboards based on the Intel Z390 chipset. The collection is led by a diverse cast from the Republic of Gamers that elevates gaming and overclocking to new heights. ROG Strix offers more streamlined alternatives that include a mighty Mini-ITX model, while TUF Gaming focuses on the essentials to hit more affordable price points. Outside the gaming sphere, the Prime family serves up signature ASUS features in a professional package, and the WS sets the stage for serious workstations and prosumer builds.

There’s an ROG or ASUS Z390 motherboard for everyone, whether you’re a seasoned veteran who tunes to perfection, a hardcore gamer obsessed with performance, or a first-time builder seeking a seamless PC experience.  For further details about our ROG lineup please visit ASUS ROG. Our buying guide with complete specifications, pricing and images for the entire lineup of Z390 motherboards is located at Edge Up ASUS.

Since its inception way back in 2006, the Republic of Gamers has set the standard for gaming and enthusiast motherboards. We created the category, and with each new generation our designers and engineers refine the formula in pursuit of faster performance, more customization, and a better overall gaming experience.

For Z390, the Maximus XI series embraces the dark side with blacked-out boards in multiple sizes and variations. It leads with the unparalleled Maximus XI Extreme for dream builds, which is followed by armour-clad near twins in Maximus XI Formula and Code. The Maximus XI Gene rethinks our approach to microATX, and the Maximus XI Hero strikes the right balance in three different flavors.

Democratizing the republic with ROG Strix

ROG Strix fills the space below the Maximus series with more affordable options that retain the look and feel people have come to expect from the Republic of Gamers. These models keep must-have features for gaming and overclocking but are not as extreme as their ROG siblings. In the Z390 series, the Mini-ITX Strix Z390-I Gaming is joined by three full-sized ATX boards: the Strix Z390-E, Z390-F, and Z390-H Gaming.

TUF offers a new direction for gaming hardware that combines builder-friendly features with battlestation-ready themes. Its unique aesthetic and focus on reliability and gaming essentials are shared by a growing collection of additional hardware we developed in-house, plus contributions from a broader TUF Gaming Alliance made up of industry titans that produce compatible parts. You can already buy matching memory, coolers, and power supplies along with a TUF Gaming case, and additional hardware is on the way.

The TUF Gaming Z390 series spreads across five different models that are ultimately very similar. You can choose between the TUF Z390-PRO Gaming and TUF Z390-PLUS Gaming for ATX along with the TUF Z390M-PRO Gaming for microATX, with WiFi-equipped versions thrown in for good measure.

WS and Prime do more than just gaming

The recent resurgence of PC gaming is partly responsible for the litany of gaming boards in our lineup, but desktops can do a lot more, especially with eight CPU cores at their disposal. Our WS and Prime motherboards are more businesslike in their approach, with an eye toward professionals and prosumers building powerful machines geared more for productivity instead of play. They also appeal to enthusiasts and even gamers who want many of the same features with an entirely different look.

The WS Z390 PRO loads up on expansion capacity for Coffee Lake workstations, while the Prime Z390-A hits the sweet spot ASUS aficionados expect with each new generation. Basic builds can get by with the Prime Z390-P and Z390M-PLUS.

For further information, product images and specifics on the ROG, ROG Strix, Prime, WS and TUF Gaming motherboards, please check out our buyer’s guide at Edge Up ASUS.  Additional images and in-depth overview of our ROG and ROG Strix motherboards is located at ASUS ROG.

ASUS is one of Fortune magazine’s World’s Most Admired Companies, and is dedicated to creating products for today and tomorrow’s smart life. Our comprehensive portfolio includes Zenbo, ZenFone, ZenBook and a range of IT devices and components, along with AR, VR and IoT. ASUS employs more than 16,000 people worldwide and over 5,000 world-class R&D talents. Driven by innovation and committed to quality, the company won 4,511 awards and earned approximately US$13 billion of revenue in 2017.

Republic of Gamers (ROG) is an ASUS sub-brand dedicated to creating the world’s best gaming hardware and software. Formed in 2006, ROG offers a complete line of innovative products known for performance and quality, including motherboards, graphics cards, laptops, desktops, monitors, audio equipment, routers and peripherals. ROG participates in and sponsors major international gaming events. ROG gear has been used to set hundreds of overclocking records and it continues to be the preferred choice of gamers and enthusiasts around the world. Learn more about the choice of champions at https://rog.asus.com.

We have 1535 guests and no members online