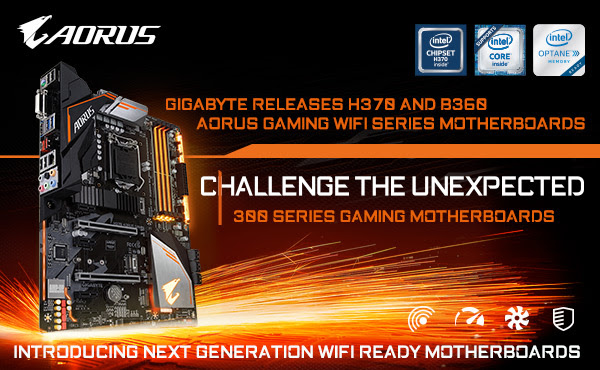 H370 and B360 AORUS GAMING 3 WIFI motherboards implement an Intel® Wireless-AC 9560 module;with Intel® CNVi™ WIFI with Wave2 technology to support MI-MUMO 802.11ac and Bluetooth 5.0. When paired with an Intel® 8th Gen. Core processor, the motherboards deliver next-gen wireless connectivity that is significantly faster and more stable across longer distances. Under the AORUS design, the 2x2 802.11ac WIFI Wave 2 is optimized for faster download speeds even under dense network traffic. Wave 2 technology is capable of delivery speeds up to 1.73 Gbps, double that of previous generations. MU-MIMO support for multiple simultaneous connections means users can maximize their network connectivity while multitasking, streaming, or gaming. In addition to next gen WIFI, the boards also offer lightning-quick Ethernet from its Intel i219V GbE LAN.

Supporting the Intel® 8th Gen. Core processors, the H370 and B360 AORUS GAMING 3 WIFI motherboards deliver impressive performance that gamers associate with the AORUS brand. The H370 AORUS GAMING 3 WIFI motherboard utilizes a Hybrid 8+2 Phase PWM design with superior transistors to maximize the efficiency of its power delivery while reducing the thermal

constraints of traditional designs. The motherboards are also meticulously designed with highly power-efficient components so that power consumption is compliant with standards set by the CEC 2019 Energy consumption regulations. A BIOS option is available for activating the power-saving mode in which the motherboards conserve up to 15% less power relative to older platforms.

Onboard audio quality is also significantly bolstered by the upgrade to a Realtek ALC1220-VB audio CODEC. The improvement is particularly noticeable for the front panel MIC with SNR values increased by almost 20% to 110 dBA, enhancing the audio fidelity of the streaming experience. Gamers will be able to take full advantage of the audio quality by making use of the improved auditory cues to locate enemies more effectively and utilize team voice chat for clearer communication in game. Impedance-detecting Smart Headphone AMP prevents distortion and low volume issues automatically.

The redesigned M.2 Heatsinks on these H370 and B360 AORUS GAMING 3 WIFI motherboards take storage performance to the next level. One of the slots is protected by a M.2 Thermal Guard limiting the effect of thermal throttling and allowing for transfer speeds up to 32 Gbps. Each of the two M.2 slots utilize specially designed GIGABYTE dual slot mode which automatically detect and switch between SATA and PCIe mode for an easier building experience. Rounding out the enhanced connectivity of the new H370 and B360 motherboards is Intel® Optane support and native USB 3.1 Gen2 ports with transfer speeds up to 10Gbps.

AORUS H370 and B360 motherboards have all the features users have come to expect such as DualBIOS technology, Ultra Durable components, anti-sulfur resistors alongside GIGABYTE’s full suite of software. Smart Fan 5 in conjunction with dual hybrid fan headers gives users the freedom to use any fan while maintaining complete control over their fan profiles. For users who want to take their air cooling solution to the next level our boards also feature thermal probe headers to monitor specific areas or hot spots.

RGB Fusion Technology adds style to these boards, and offers onboard LEDs as well as support for 5V or 12V Lighting strips which can be fully customized to enhance any build. With more than ten different preset configurations for RGB Fusion, users can build their ideal machines while bringing extra style to their workspace configurations.

Other GIGABYTE H370, B360 and H310 AORUS and Ultra Durable series motherboards will soon be available after the launch of the H370 and B360 AORUS GAMING 3 WIFI motherboards. For additional product information and news on these motherboards, please check out our AORUS Gaming Motherboard section here.