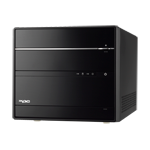 “When you want the latest and greatest, you should turn to our new R6 computers,” said Marty Lash, director, sales and marketing, Shuttle Computer Group, Inc. “They will make your movies, 3D entertainment and gaming programs soar.”

The Shuttle SZ87R6 computer supports a 500w power supply and has dual LAN ports; if one server or network connection fails, another can be up and running automatically. When connected simultaneously, bandwidth is increased for an even more effective entertainment. It also allows users to overclock (speed up the processor) for a customized experience. Shuttle’s SH87R6 offers 300w of power and one LAN port.

Shuttle’s SH87R6 is currently shipping; the SZ87R6 is expected to ship in December.