Taipei, Taiwan, August 24, 2010 - GIGABYTE TECHNOLOGY Co., Ltd, a leading manufacturer of motherboards, graphics cards and computing hardware solutions today proudly announced the 3rd annual GO OC (GIGABYTE Open Overclocking Championship) is soon to get underway. Contestants from over 33 countries have competed in the local and then regional finals which were held in Indonesia, China, Mexico, Spain and USA from June to August. The victors of the regional events will meet on the battlefield in Taipei, Taiwan at the Hua-Shan Creative Park (East 3 Hall) on Saturday, September 25th, 2010. 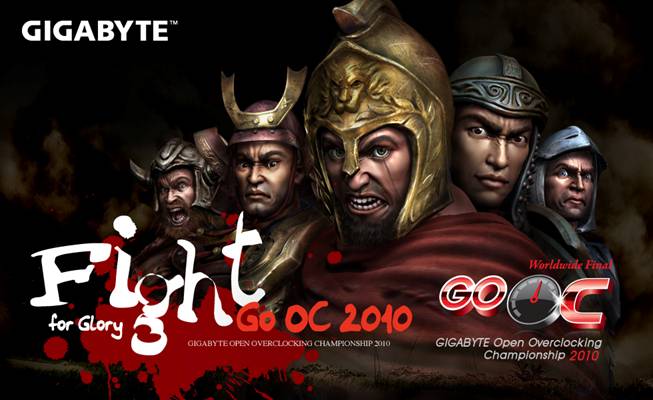 “We are thrilled to be able to host what is shaping up to be our most exciting GO OC battle to date,” commented Henry Kao, Vice President of GIGABYTE Motherboard Business Unit at GIGABYTE Technology Co. Ltd. “With the challengers all being the most elite overclockers from around the world, and the hardware they will be using for the event by far the most powerful and overclocking-friendly equipment available on the market today, we expect to see some pretty amazing performance heights being reached, and the winner of this event will without a doubt be the world champion overclocker for 2010!”


As top notch hardware is paramount to achieving record-breaking overclocks, GIGABYTE is pleased to have several industry-leading venders including Intel, ATI, ADATA, Seagate and ENVISION providing world-class hardware for the event.


“Intel continues to invest heavily in the overclocking market with our Intel® Extreme Edition Processors and the recently released Unlocked Intel®“K” Processors,” commented Zane Ball, General Manager of the Desktop Platforms Division at Intel. “We are excited to be part of GO OC and look forward to the overclocking contest as our customers push their Intel hardware to the limits.”

The GIGABYTE GO OC official website (https://gooc2010.gigabyte.com/Default.aspx) is now online featuring all the latest GO OC contest information. See profiles of the contestants, photos and videos of the regional events as well as view a live video stream of the final event brought directly by the team at Overclocking-TV (https://www.overclocking-tv.com/). Fans wanting to get in on the GO OC action can also join the guess the winner contest and submit who they think will be the winner of GO OC 2010. 13 lucky guessers will be randomly selected and will win official GO OC sponsorship hardware. There will also be one lucky draw winner selected each week from August 20th to September 24th with a different prize each week.


To get all the latest information about GO OC, please visit: https://gooc2010.gigabyte.com/Default.aspx

We have 1213 guests and no members online